We’ve got 15+ Holi crafts and activities for kids including Free coloring pages, printables, chart activities to keep your kids busy during the Holi festival!

India has many festivals, with different ones for different regions and different seasons. But if you were to ask which one was the most fun, there’s just one correct answer – Holi!

Holi, is a religious spring festival celebrated by Hindus. It is a festival celebrated with colour, water and the exchange of sweets and is primarily observed in India, Nepal, Pakistan, and countries with a large Indian population that follow Hinduism.

How is Holi celebrated in India?

Holi is celebrated by people throwing scented powder and colored water at each other. Bonfires are lit on the eve of the festival, also known as Holika Dahan (burning of Holika) or Chhoti Holi (little Holi), after which Holika Dahan prayers are said and prasad is offered.

Holi is celebrated at the end of the winter season on the last full moon day of the lunar month Phalguna (February/March), on a full moon night, which usually falls in the later part of March.

Why do we celebrate Holi?

Holi is usually celebrated in March and signals the coming of spring in India, it commemorates the good harvests and the fertile land. It’s the start of new hopes and relationships, signified through the burst of colors everywhere.

What is the story behind Holi festival?

Holi also celebrates many religious myths and legends. On the eve of the festival, bonfires are lit in memory of a young Prahlad’s miraculous escape from the Demoness Holika, sister of Hiranyakashipu in Hindu mythology.

It starts with a legend about Demon King Hiranyakashipu. He was so egoistic that he commanded everybody in his kingdom to worship only him.

Hiranyakashyap had a son, Prahlad, who was the greatest devotee of Lord Vishnu and refused to worship his father.

Angered by this, Hiranyakashyap decided to kill his son. He tried several ways but Lord Vishnu saved him every time. Finally, he asked his sister, Holika to enter a blazing fire with Prahlad in her lap. For, Hiranyakashyap knew that Holika had a boon, whereby, she could enter the fire unscathed.

He thought that his sister would not be harmed by the fire because of the magic robe and Prahlad would be burnt to death. But the result was the opposite of what the evil demon king planned.

The evil Holika was not aware that the boon worked only when she entered the fire alone and was burnt to cinders while Prahlad, who kept chanting the name of Lord Vishnu all this while, came out unharmed, as the Lord blessed him for his extreme devotion.

Thus, Holi derives its name from Holika. And, is celebrated as a festival of victory of good over evil.

On which date Holi will be celebrated in 2021?

When you have a festival that involves splashing colored powder or paint on all and sundry, it can’t be anything but fun! The best part is that along with all the colors, Holi is also about warmer weather, sweet delicacies and of course, special Holi crafts and activities for kids!

This day is celebrated with a bonfire, followed by the actual festival when all colors break loose! And we’ve got some fun Holi crafts and activities for Kids to sweeten this deal for the whole family! 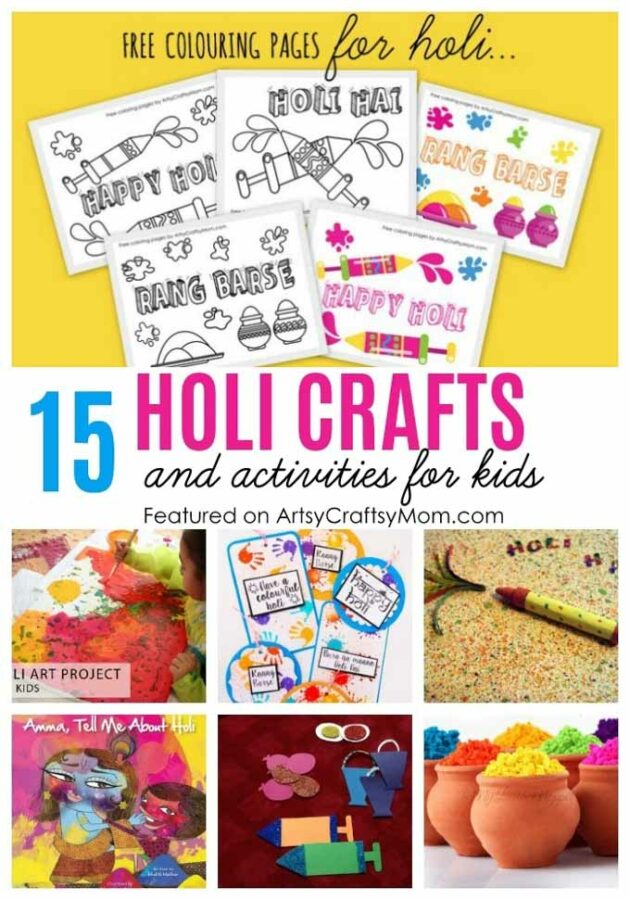 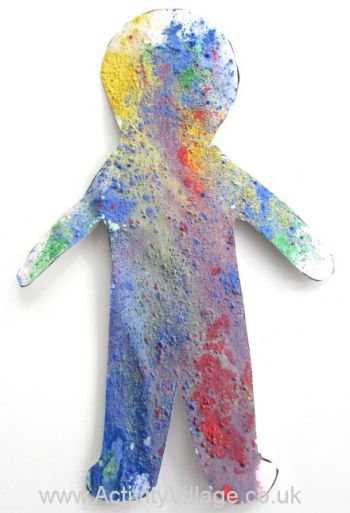 If you randomly search for images with ‘Holi’ as the search term, you’re sure to be flooded with pictures of people whose faces and clothes are covered with paint! This craft from Activity Village lets you paint people’s faces and bodies too, and you don’t even need real people for it! 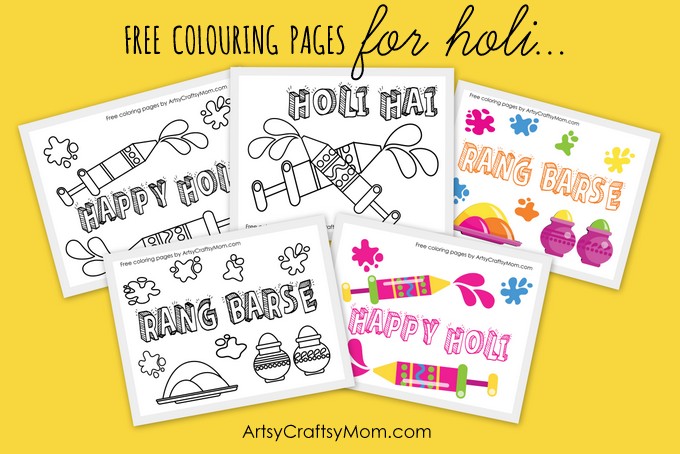 If you’re busy with Holi preparations and want to keep the little ones occupied, we have the best option here – coloring pages! Don’t forget to grab your free coloring pages pack at the end of this post. 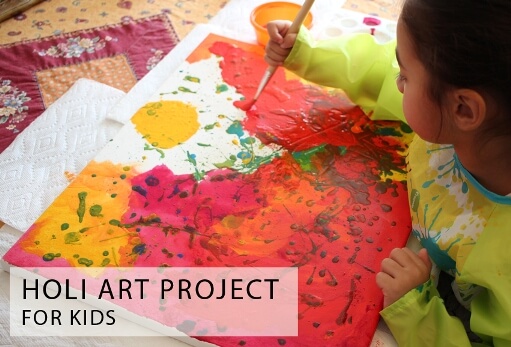 Holi is well, a messy festival, which is exactly why it’s so much fun! This Art Project from Multicultural Kids is the perfect project to take outdoors and soak in the warm weather. Kids of all ages can get involved and you need just basic supplies, so yay! 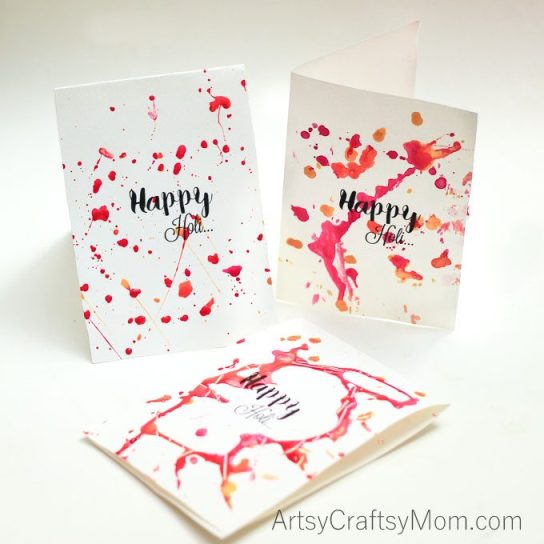 Sometimes the less you plan, the better your project turns out! These paint splatter Holi cards are an example of this. Get kids to create random patterns with free flowing liquid glass paint on the cards. You’ll be surprised at how impressive the card turn out with such little effort.

What’s the most important thing you need for Holi? Colors to throw on others, of course! And since these colors are going to get into our hair, on our skin and probably into our mouths and eyes too, we need to ensure they’re safe. Make these homemade, kid-safe Holi colors and enjoy a stress-free festival!

Check the video playing at the top of this page for details on how to make your own. 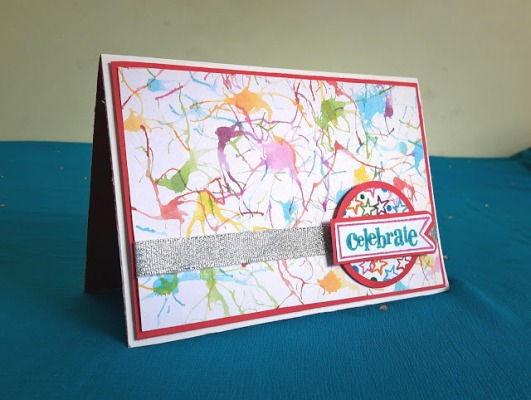 Love for Krafts has the perfect card that literally screams Holi Hai!! Take an empty straw and some distress inks and go crazy blowing the paint everywhere! It’s just like playing Holi, but on a card! Since you can cut it and stick it on a base cardstock, you don’t need to worry about keeping it neat. 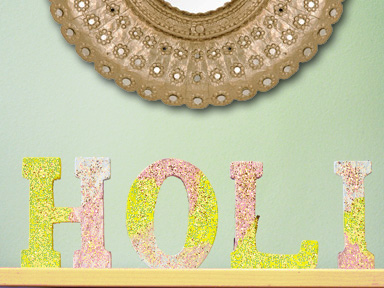 Holi doesn’t mean paint splashing outdoors, you can also deck up your interiors in style! The folks at Gnaana have used wooden craft blocks, but you can use large cardboard ones too. Use paints, or glitter or mix them both up – it is Holi after all! 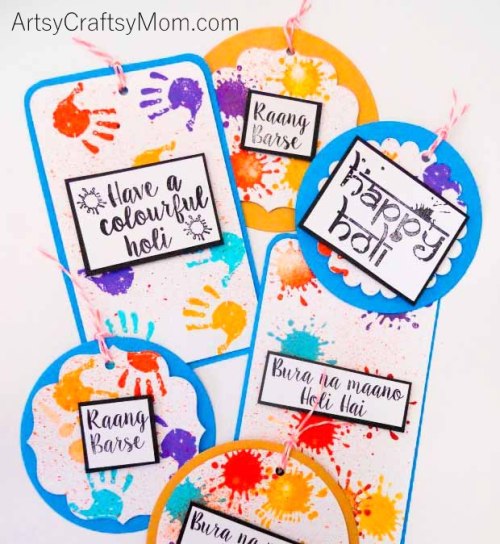 If you’re wondering how to give your Holi gifts that extra punch, then these Holi gift tags are just what you need! These tags have been made with custom Holi stamps, but you can make the tags without them too. Choose fun Holi slogans that are sure to bring a smile on anyone’s face! 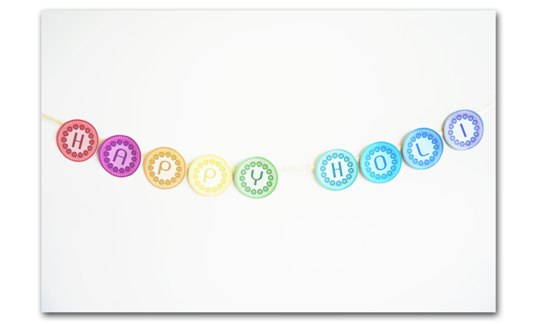 Hang up this Happy Holi banner from Gnaana and your home will instantly look Holi-ready! The rainbow-themed banner is beautiful and you can also color it the way you want by downloading the color-in version instead of the colored version. 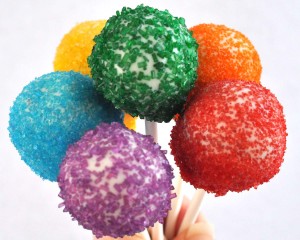 Planning a fun theme party for Holi? Then you’ll get everything you need at Masala Mommas! They have ideas for food and drink, decor, games and activities. With the other ideas listed here, you’re all set to have a blast with your guests for Holi!

We have lots of ideas to celebrate Holi with the kids, but do they know the meaning behind these celebrations? If you’re wondering where to start, Amma, Tell me about Holi is perfect! With rhyming text and bright pictures, the book is great for kids of all ages. Toddlers will enjoy reading aloud with Mom or Dad and school kids can enjoy it on their own.

In this multicultural and educational series from Bollywood Groove, join Maya, Neel and their pet squirrel, Chintu, as they visit their cousin Ameya in India to celebrate Holi!
Kids will learn about history, food, language and cultural elements of Holi as it is celebrated across India… all while making two new best friends! Plus they have a Free Printable Holi Classroom Activity Kit for Parents or Educators including Songs, Dance-along, Story-time, flash cards, coloring pages, fun quizzes and more! 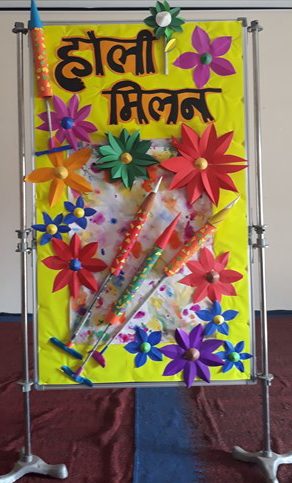 Make a custom Holi themed Chart activity for your school. Splash colors on a large Chart paper, Add colorful paper flowers, some paper pichkaris and use it for Show and tell at school. 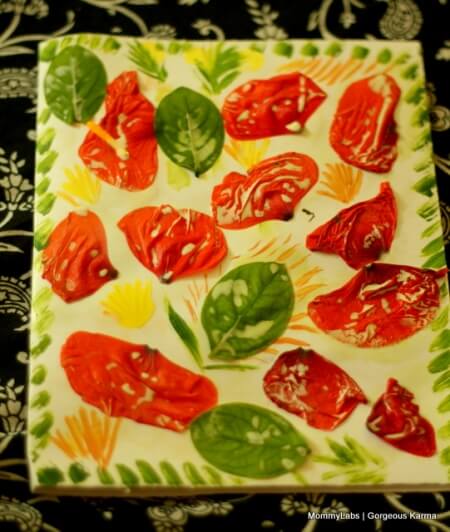 Bring nature into your Holi celebrations with these leaf printed Holi cards from Mommy Labs. Use leaves and petals of any shape, dip them into paint and go nuts printing them all over your card. We love how unique the cards end up looking! 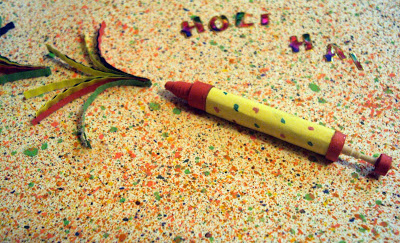 This cute paper quilled pichkari is so adorable, I wonder if I’d actually give it away or hang it up in my room! Image Create Art gives us multiple images so you can make it easily if you have any practice in quilling. If not, well this should inspire you to try! 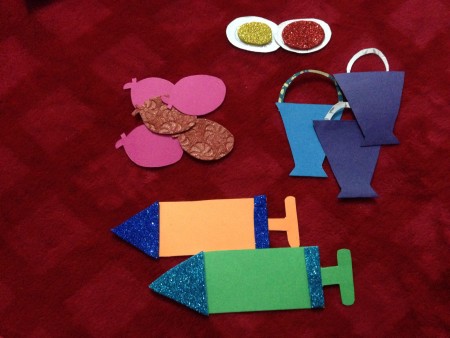 Holi’s a time for fun and games, but not all of them need to be messy! Ho Kitty has some cute ideas for tambola cards in Holi themes. Make them out of card stock in different colors and bling them up with glitter! Then get everyone together and have fun!

We found a drawing tutorial that you might enjoy too –

Don’t forget to grab our Free Holi Coloring Pages – 3 sheets that are perfect for adding that splash of color. Click the image below to download for free. 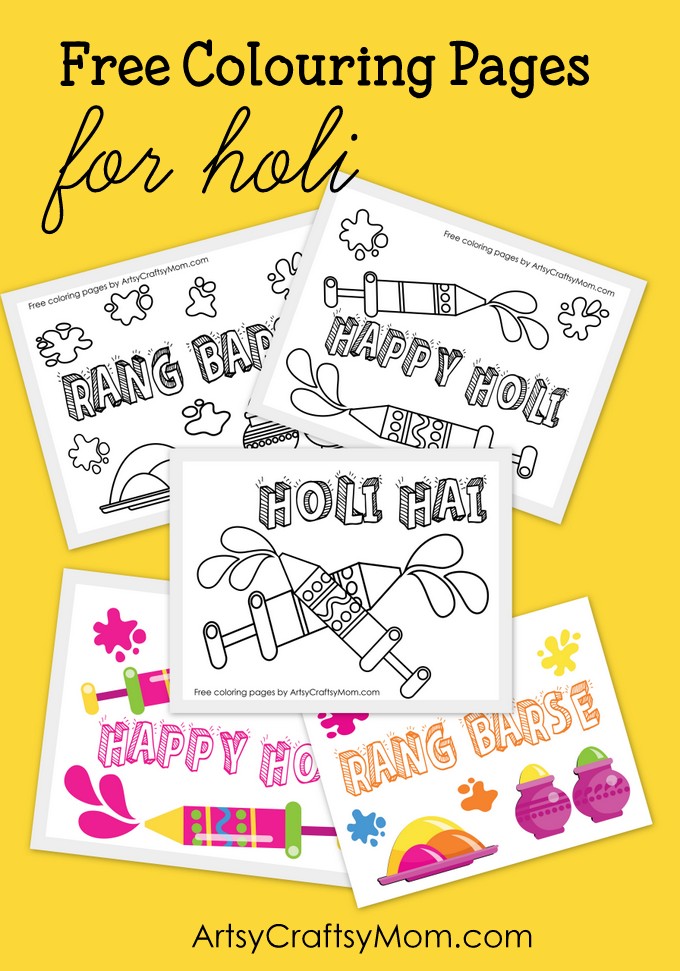 Yes, splashing colors around is fun, but so is doing crafts! You can make these to keep for yourself or give out as gifts to your friends and family – it’ll make it easier for you when you dump color on their heads! 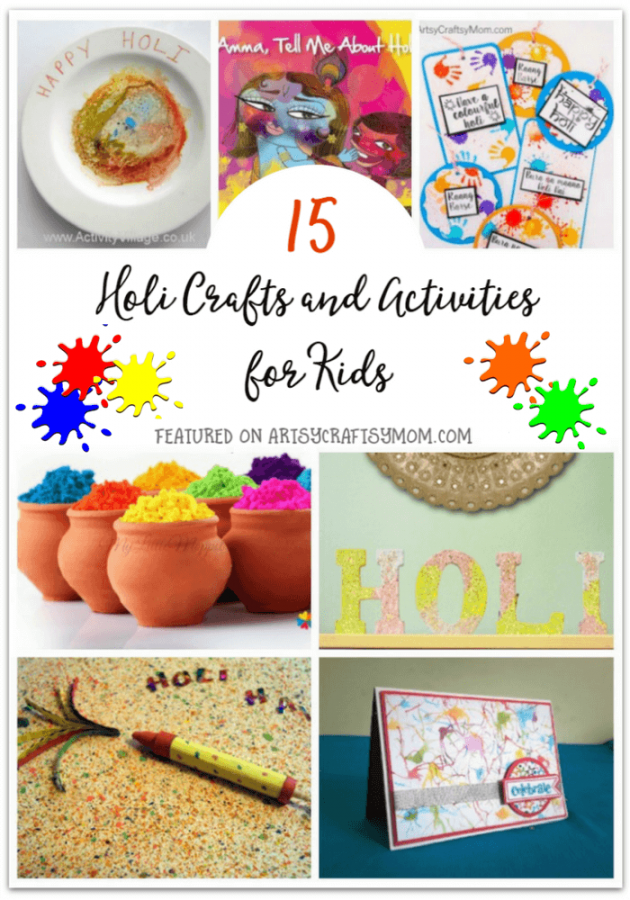