With these Alice in Wonderland Crafts, you’ll be all set to have a crazy tea party of your own, and you can even dress up like the Mad Hatter for it!

Some books are meant for kids, some are meant for adults, and there are some that grow with you. A great example of this is the book Alice in Wonderland, which though written in 1865, still appeals to us. So much so that movies are being made even today, with the most recent one being released in 2010.

If you’ve watched that movie, you know the main character that stood out – yes, it’s the Mad Hatter, who got more attention than Alice herself! Played excellently by Johnny Depp, the character of the Mad Hatter is one we won’t ever forget.

Did you know that the character is based on the term ‘mad as a hatter’? Apparently, in Victorian England, hatters worked with mercury when making felt hats, which caused long-term brain damage due to mercury poisoning. It’s a tragic back-story, but it is believed to be what inspired the term in the story.

Well, we’re here today because it’s the Mad Hatter’s special day this month – 6th October is celebrated as National Mad Hatter Day, and we can’t think of a better way than celebrating with some Alice in Wonderland crafts – along with a crazy tea party! 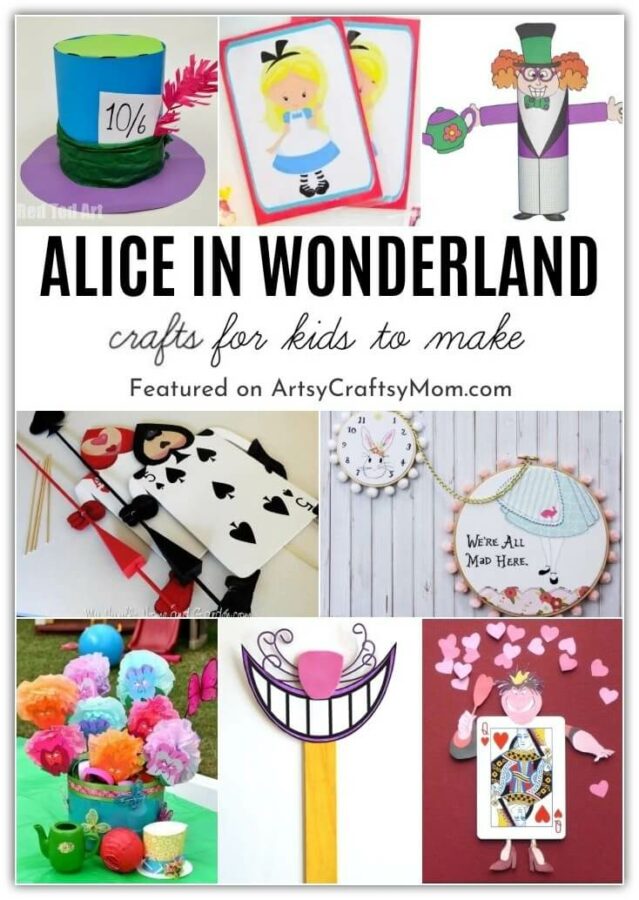 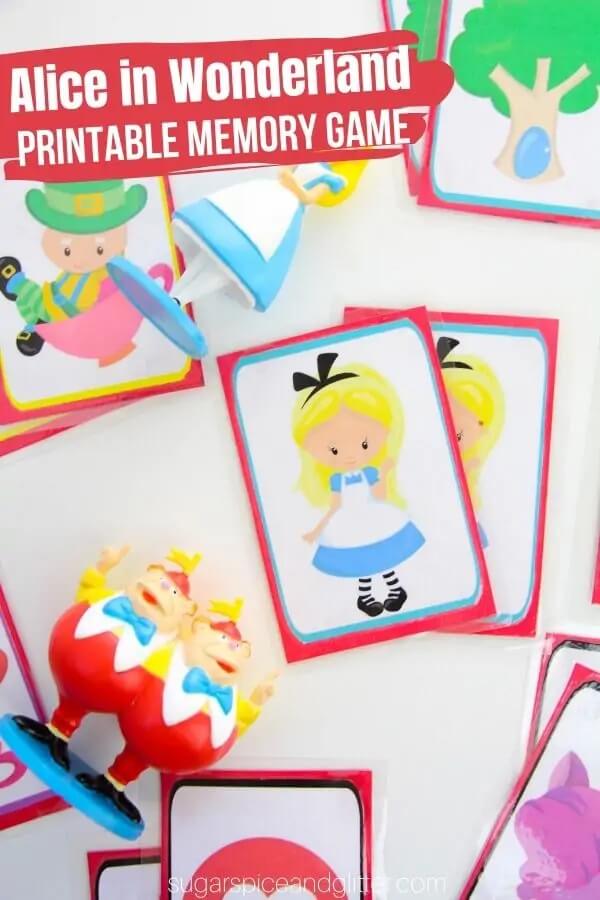 We begin this list of Alice in Wonderland crafts with a matching game printable set from Sugar Spice and Glitter! It’s a cute little celebration of all the characters in Alice in Wonderland, and a great tribute to the children’s book that has never been out of print. What’s more, it has been translated into 174 languages – even Oscar Wilde and Queen Victoria were fans of the book! 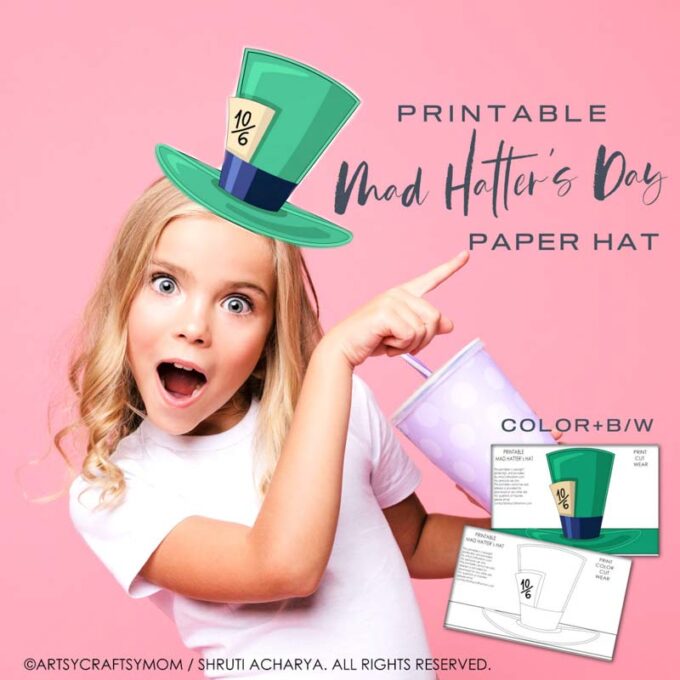 Make your own Mad Hatter hat by printing out the printable from our October Bundle, available for Free for all our Club ArtsyCraftsy members. Cut out the hat, fold the band and you’re ready to join the Mad Hatter’s party!

The Red Queen’s card soldiers are just some of the many quirky characters in the story, and My Humble Home and Garden shows us how to create our own little card army! 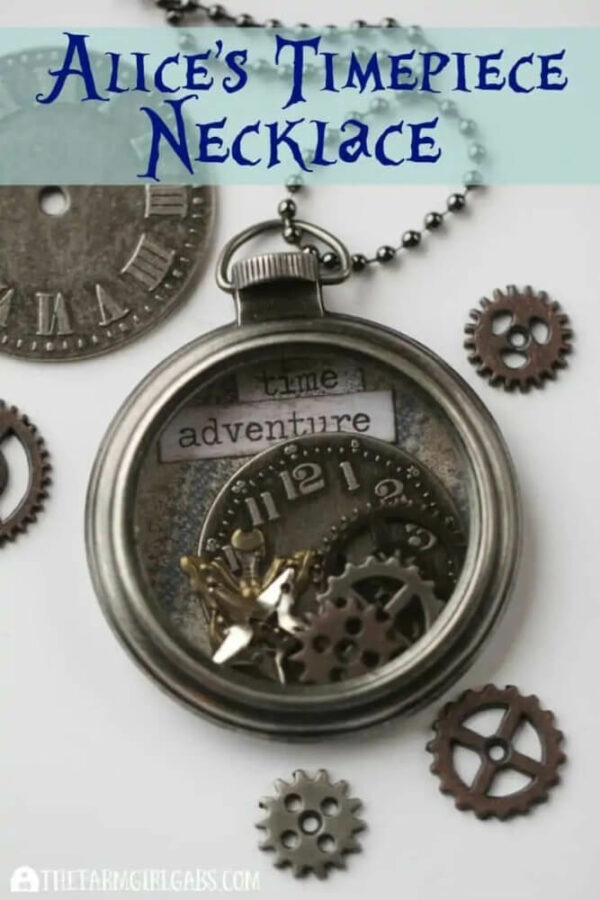 Was Alice dreaming or did she really fall down the rabbit hole? If you’ve read the sequel, you know that there are more such tricky questions! While you ponder over them, why not try making this little timepiece from The Farm Girl Gabs? It’s a great accessory to wear with your Alice costume! 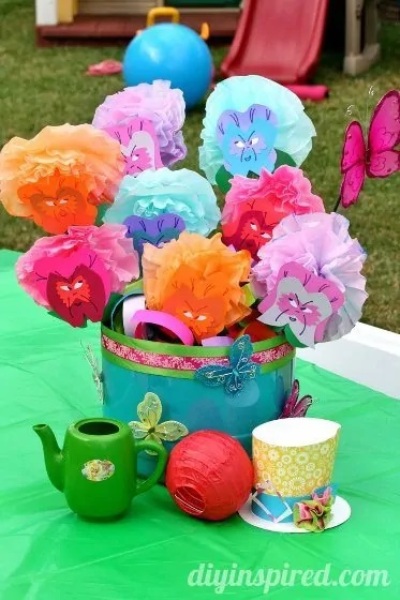 This project from DIY Inspired is sure to remind you of the many colorful flowers in the Disney movie released in 1951. While most of us remember this animated movie as well as the feature films of 2010 and 2016, many of us don’t know that the first ever Alice in Wonderland movie was in 1903, and it was a silent one! 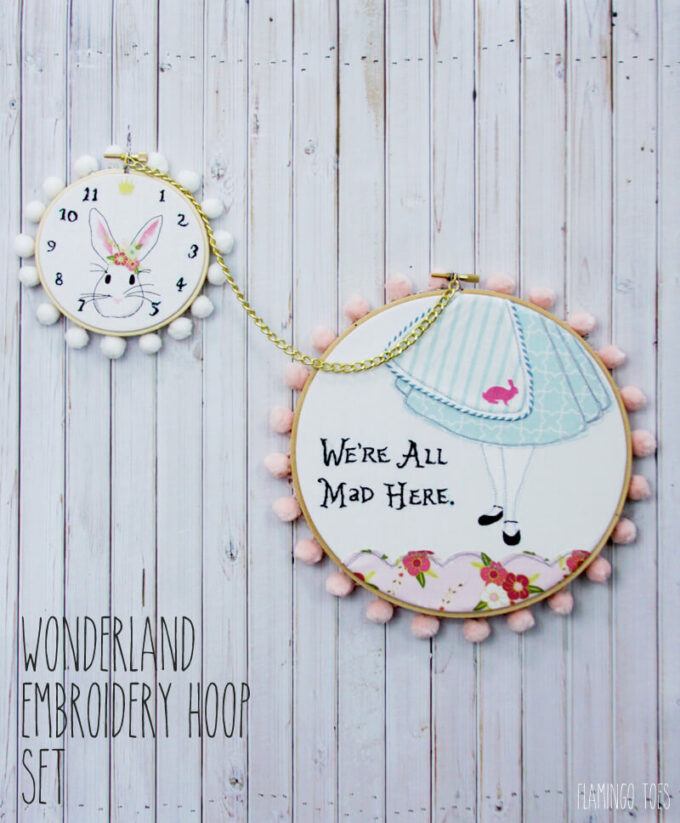 “We’re all mad here” – love this quote that is so beautifully captured by Flamingo Toes in this project! That’s a great achievement of the book – it showed people that children’s literature didn’t have to be filled with moral lessons all the time; it could also be nonsensical and plain silly! 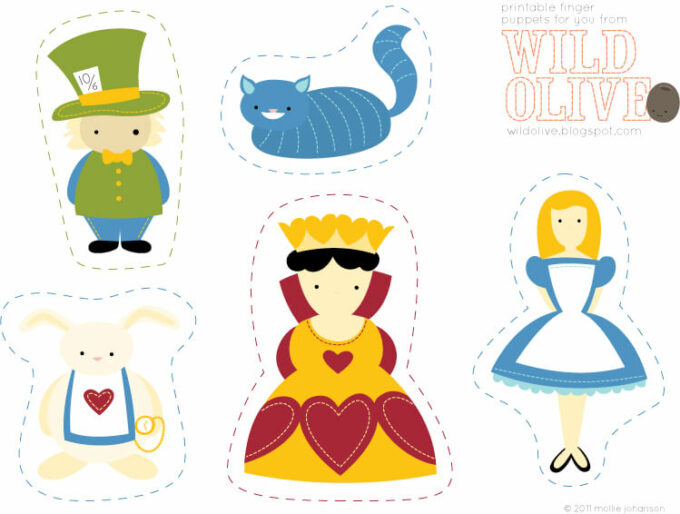 Alice in Wonderland hasn’t just been adapted for the screen – it has also been turned into plays. If you’d like to put on your own Alice in Wonderland show, Wild Olive has some printable finger puppets you could use. You’ll notice that Alice here has blond hair, although the original Alice, on whom the book is based, had dark hair. This fact was also ignored by the official illustrator of the book, John Tenniel. 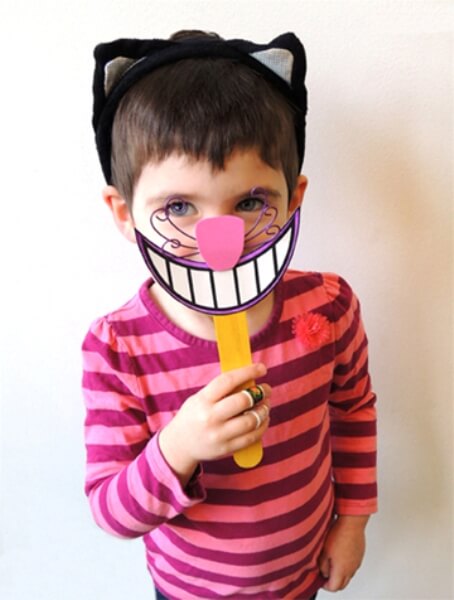 One of the most popular characters from the book Alice in Wonderland is definitely the Cheshire Cat, and Pop Goes the Page gives you an opportunity to grin like him! It’s interesting to note that the book also featured Alice’s sisters as characters. Her older sister, Lorina, appears as Lory, and her younger sister, Edith, appears as Eaglet. 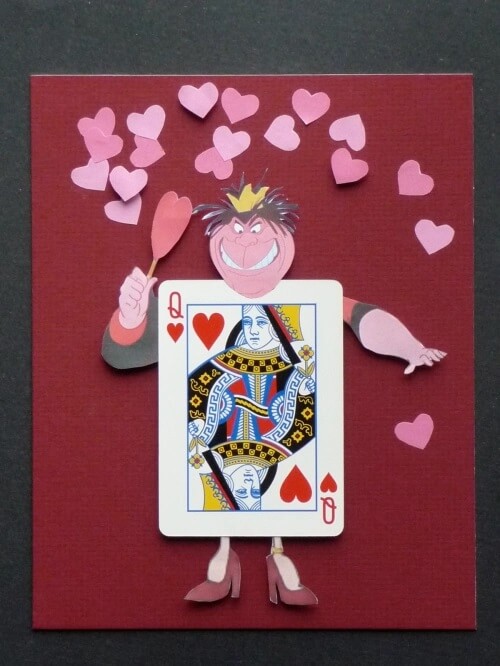 It’s difficult for movies to have the same impact as books, but sometimes, the actors do such a good job that you can’t think of anyone else to play the character! One such example is the Red Queen, who was brilliantly portrayed by Helena Bonham Carter. Watch the movie one more time to enjoy her performance – and don’t forget to make this Red Queen craft from the Art Club Blog! 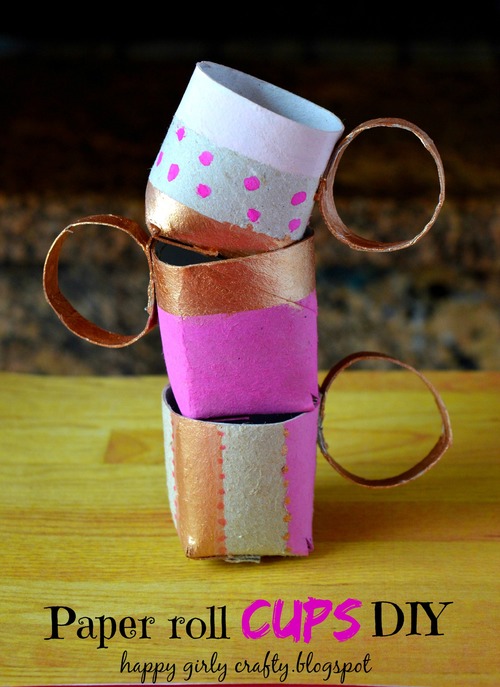 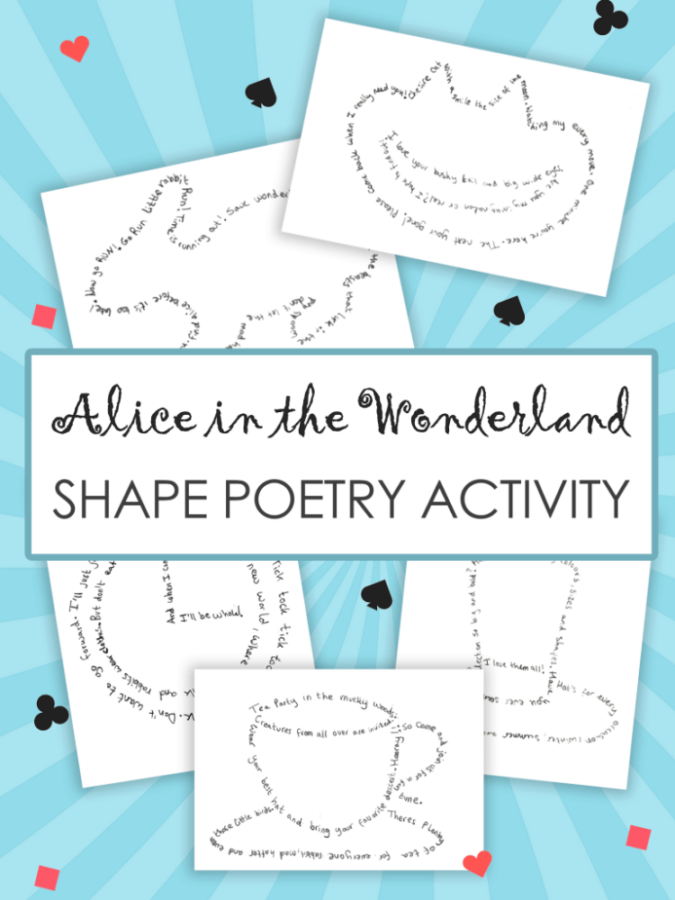 Imagine Forest brings us a unique activity to celebrate Lewis Carroll’s iconic book, where you create poetry and write it out in shape. The book is indeed worth celebrating, and Alice was voted as an icon of England in 2006 in a public poll. The Royal Mail has also issued a series of special postage stamps to celebrate the book’s 150th anniversary. 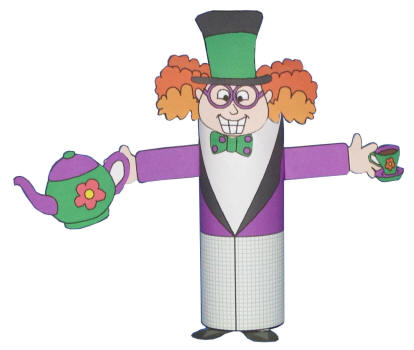 You can’t have a list of Alice in Wonderland crafts without featuring the Mad Hatter, can you? The back story of the Mad Hatter is rather interesting. He is believed to have been based on a furniture dealer named Theophilus Carter, who used to stand in the doorway of his furniture shop wearing a top hat! Create your own version of the Mad Hatter with some help from DLTK. 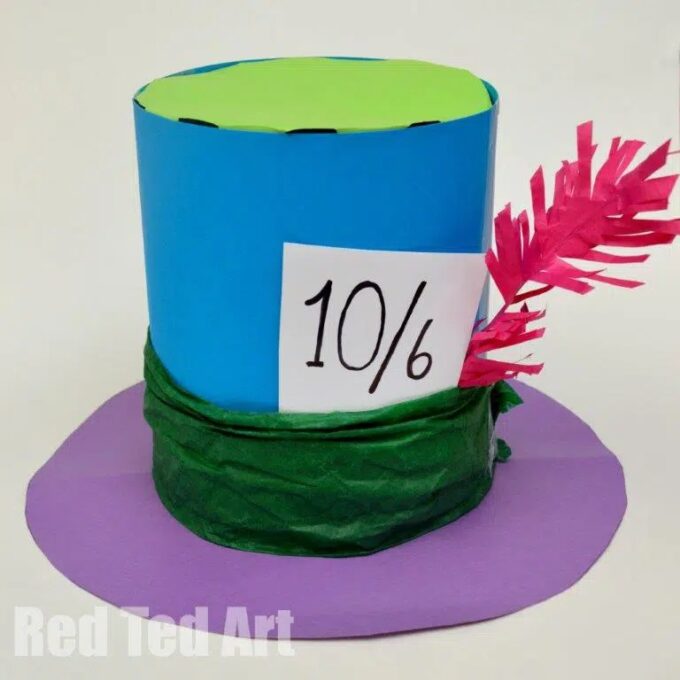 One good thing about the Hatter being mad is that you can make his hat as quirky or crazy as you want, as Red Ted Art has done here! Did you know that there is a Batman villain based on this character? He is also known as the Mad Hatter and even dresses like the one from the original story! 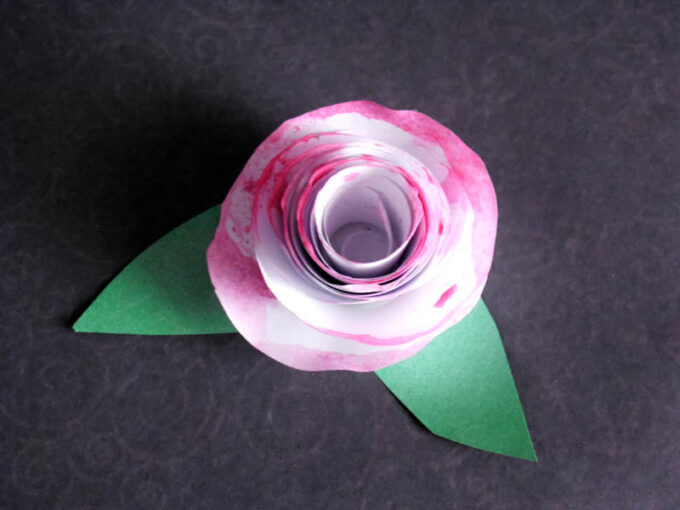 Love to Know brings us a craft that represents the white roses that were being painted over by the card soldiers to escape the Red Queen’s wrath. That part of the story has inspired many white rose-based Alice in Wonderland crafts, and some of them are quite pretty! 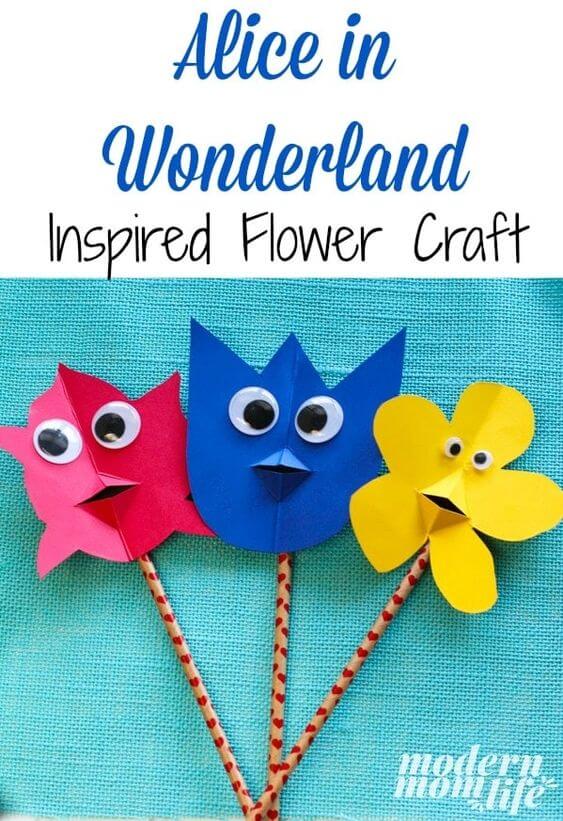 The characters in Alice in Wonderland have inspired several characters in books, movies, and songs that came later – such was the impact of the book on popular culture. In fact, a song by The Beatles, ‘Lucy in the Sky with Diamonds’, was based on Alice in Wonderland and John Lennon said that he was inspired by the fantastical nature of the book. Have fun with facts like these as you make this easy craft from Modern Mom Life. 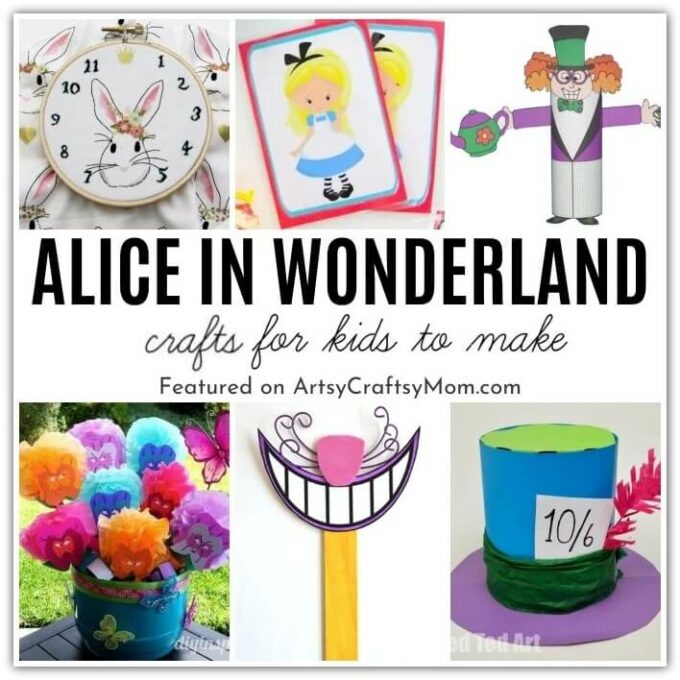 When Lewis Carroll first told the real Alice the basic plot of the Alice in Wonderland story, she liked it so much that she asked him to write it down. It took him two years to finish writing the book and then gave it to her as a Christmas gift. He had even drawn the illustrations himself! Before officially publishing the book, Carroll had it reviewed by some serious critics – children! It just goes on to show how seriously he took his work, and the result is here for the whole world to see and enjoy – and also make some Alice in Wonderland crafts! 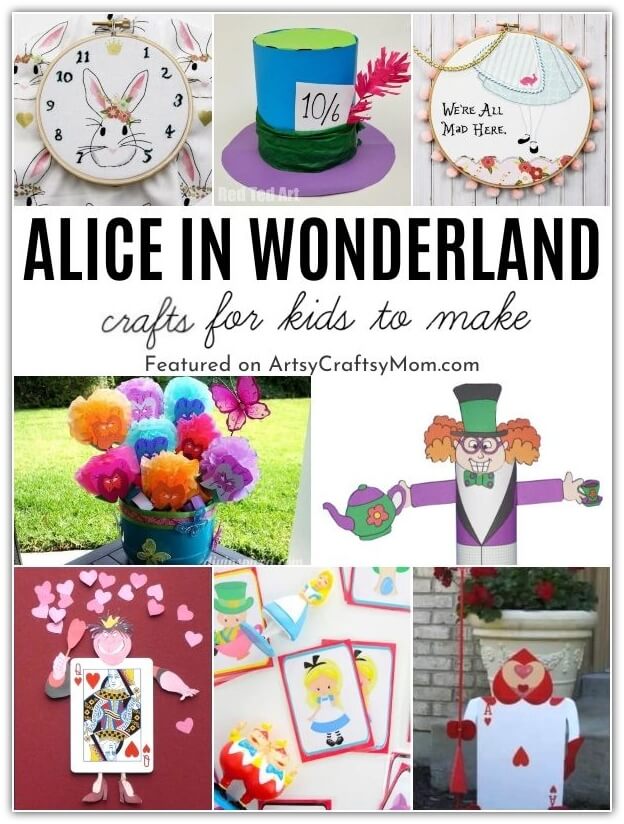 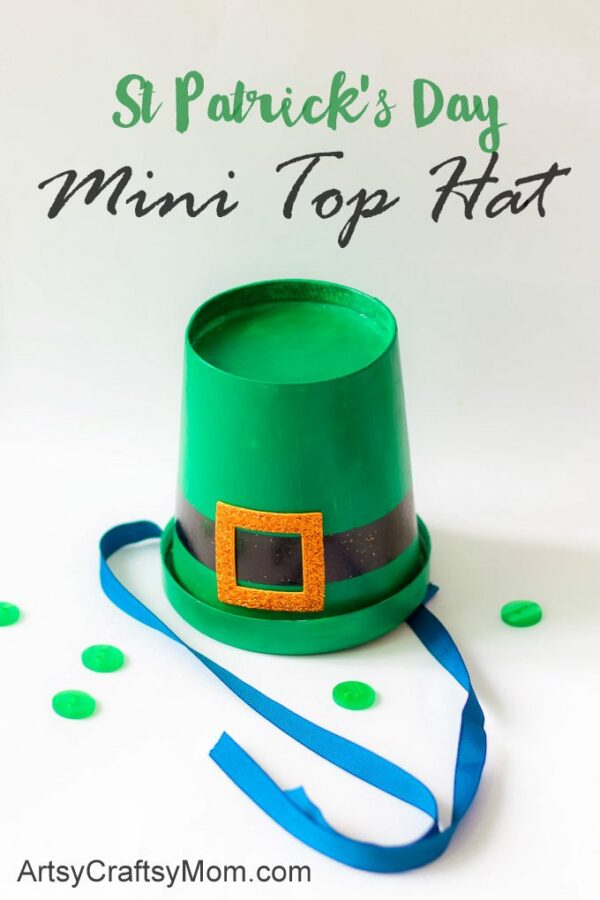 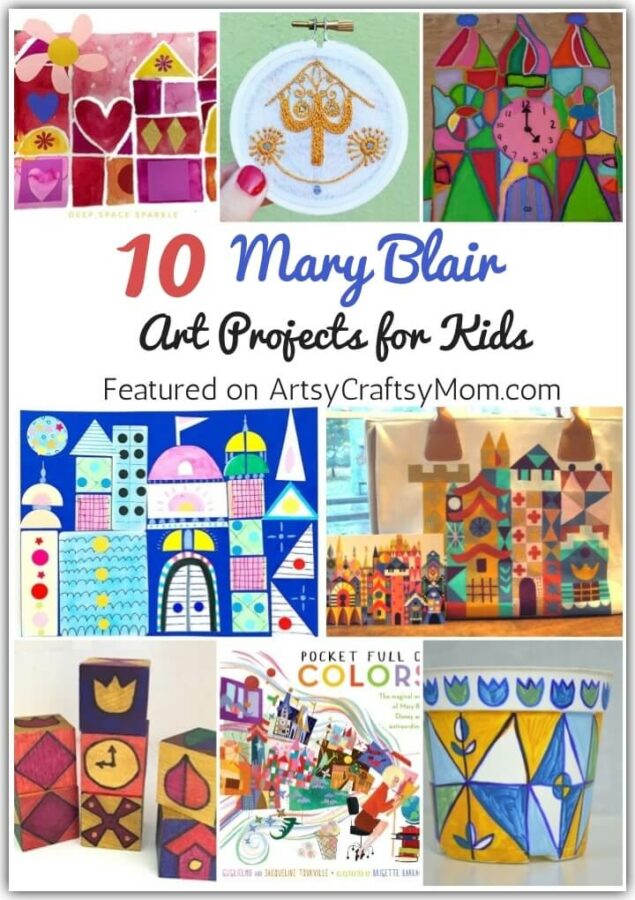 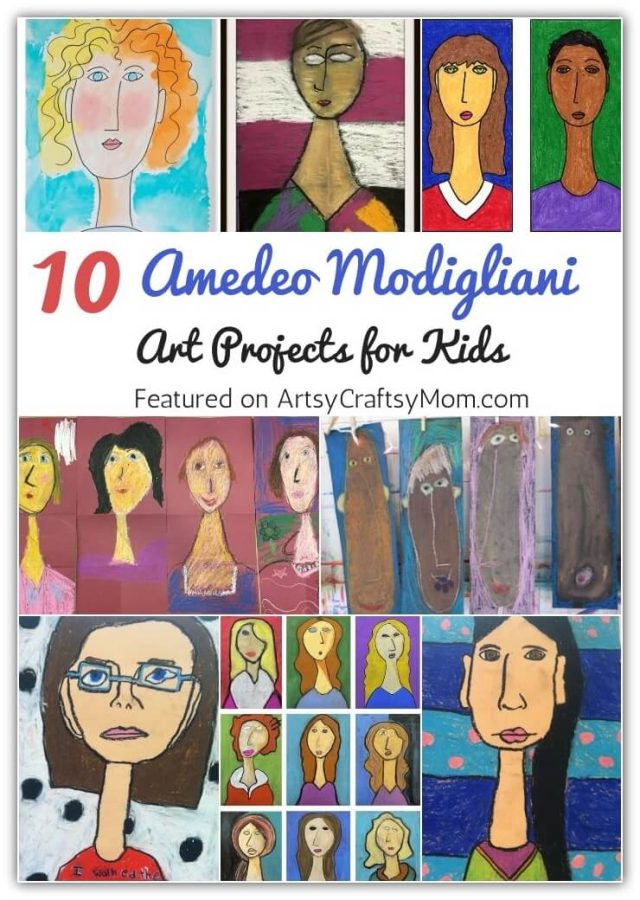 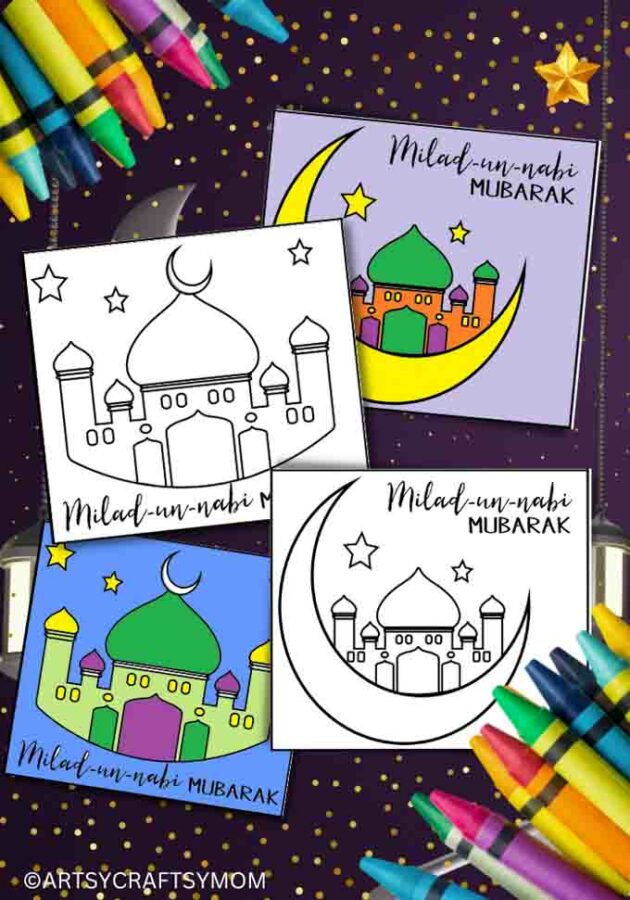