Why did Edvard Munch paint ‘The Scream’? Find out this and more about the artist with the help of these Edgy Edvard Munch Art Projects for Kids.

“My sufferings are part of my self and my art. They are indistinguishable from me, and their destruction would destroy my art.”  ~ Edvard Munch

Some pieces of art are iconic for a reason. They have withstood the test of time, and can be identified by people across the world, of all ages and backgrounds. The Mona Lisa is one example of such an iconic piece, as is the one shown here – ‘The Scream’ by Edvard Munch. 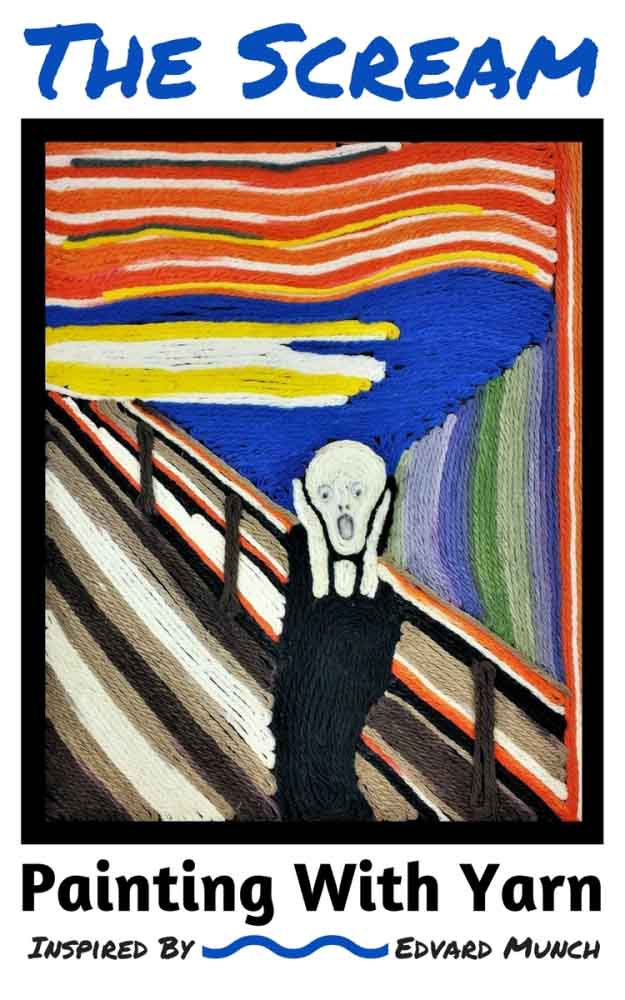 Many people talk about the concept of the ‘mad artist, indicating that most creative people are crazy. Of course, this is a myth, but it is one that Munch believed. However, Munch considered his mental instability his strength and believed it to be his source of inspiration.

Edvard Munch painted in pastels and watercolors, and although he has done many stunning works of art, it is his versions of ‘The Scream’ that truly catapulted him to the big leagues. There are four versions of this painting, and the most colorful of these sold for the fourth highest nominal price for a painting at auction.

Edvard Munch studied art at the  Royal School of Art and Design in Oslo, which is where he got the inspiration for The Scream. He found it hard to find his style initially, although he was influenced by artists like Édouard Manet, Vincent van Gogh, and Paul Gauguin.

Since it’s Munch’s birthday this month, we think it’s a good time to learn about this amazing artist through some fascinating Edvard Munch art projects for kids. Most of these are based on his most iconic piece, and it will encourage kids to dig deeper into the painting and try to identify the underlying emotions in it. 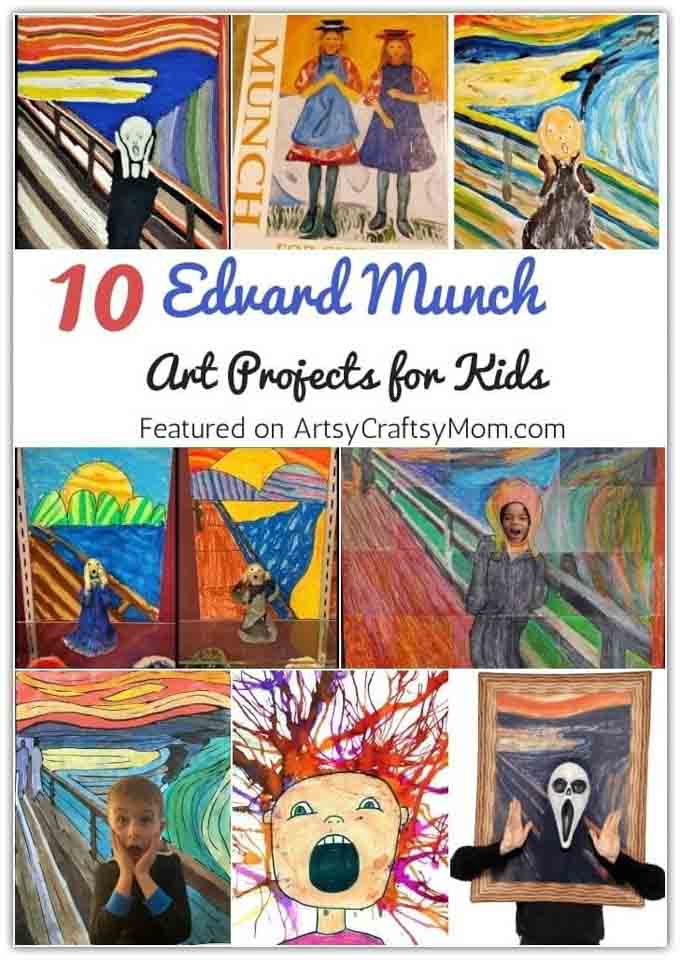 The Scream is one of the most expensive paintings in the world; in 2012, the painting sold for a whopping 119.9 million $! It is the second most expensive artwork that has ever been sold at an open auction. Woo Jr. gives its own unique take on this iconic work of art using yarn as a medium. 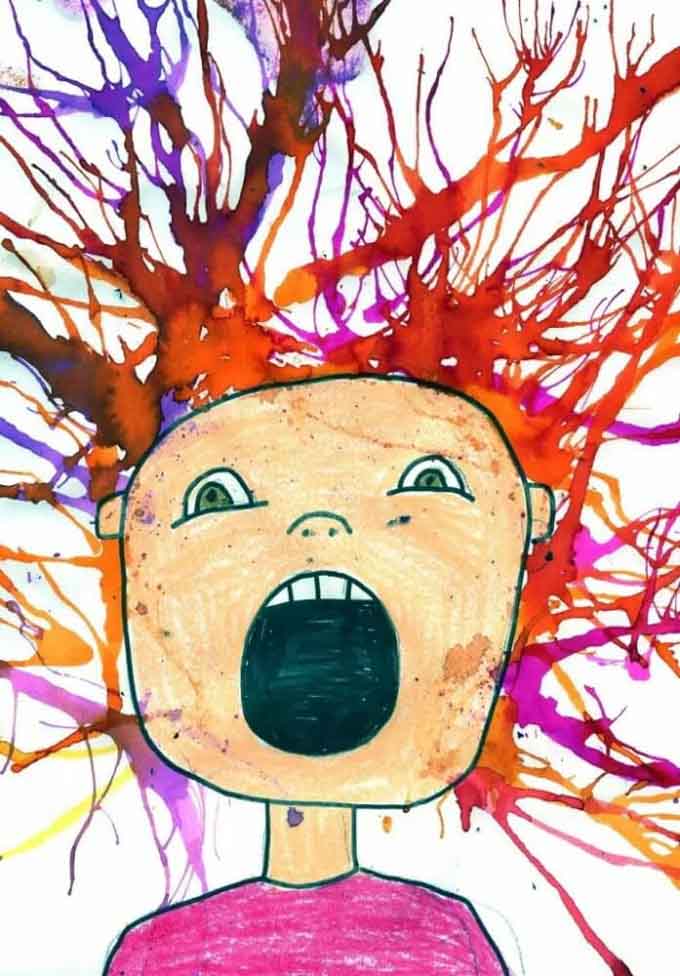 Munch was a huge fan of color. He believed that “The colors live a remarkable life of their own after they have been applied to the canvas.” He used color to indicate various emotions, with subjects often surrounded by rings of colors to indicate what they’re feeling. Art Projects for Kids translates this concept into this cute screaming portrait that kids will love painting! 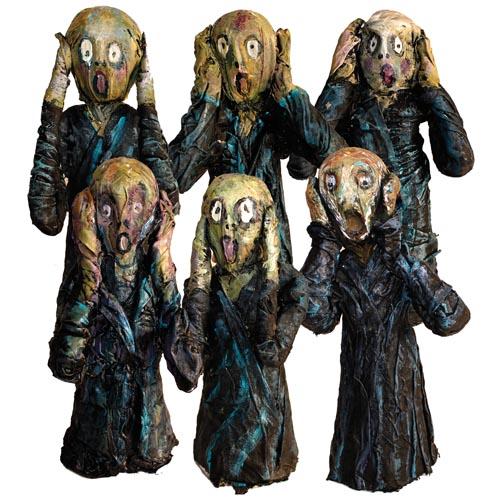 We love how United Art & Education brings alive all the intensity in the original painting by Edvard Munch. This sculpture is made using an unusual material – muslin! Add in some fabric stiffener, wire, a Styrofoam egg and acrylic paints and you have yourself a unique piece of art. 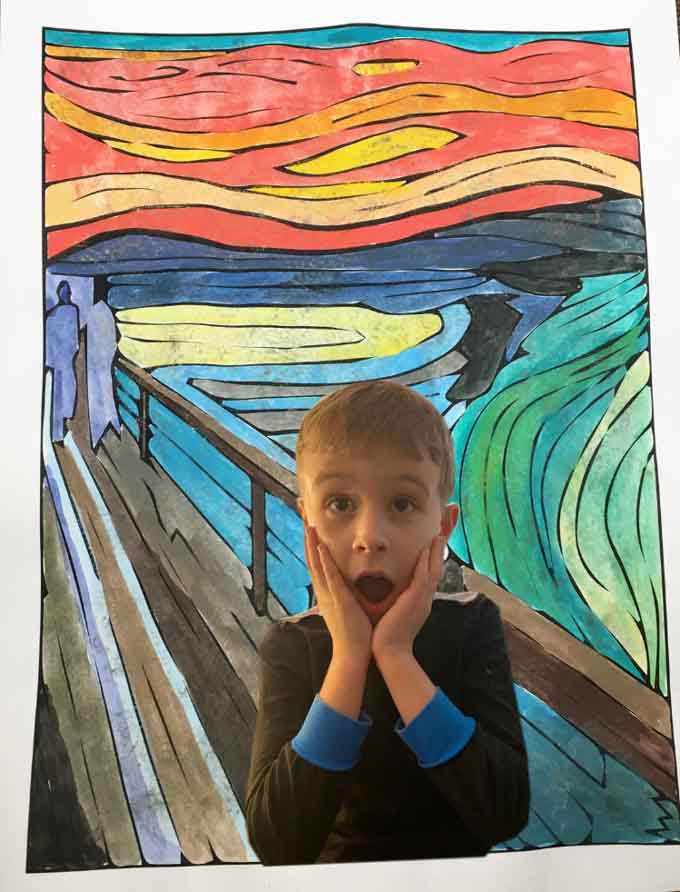 Munch did many paintings and sketches, as well as some woodwork, but he didn’t seem to be a big fan of photography. He thought that photography would “never compete with the brush and the palette until such time as photographs can be taken in Heaven or Hell!” Despite these strong words, he was quite a good photographer, and you can mix both art forms in this fun portrait by Messy Little Monster. 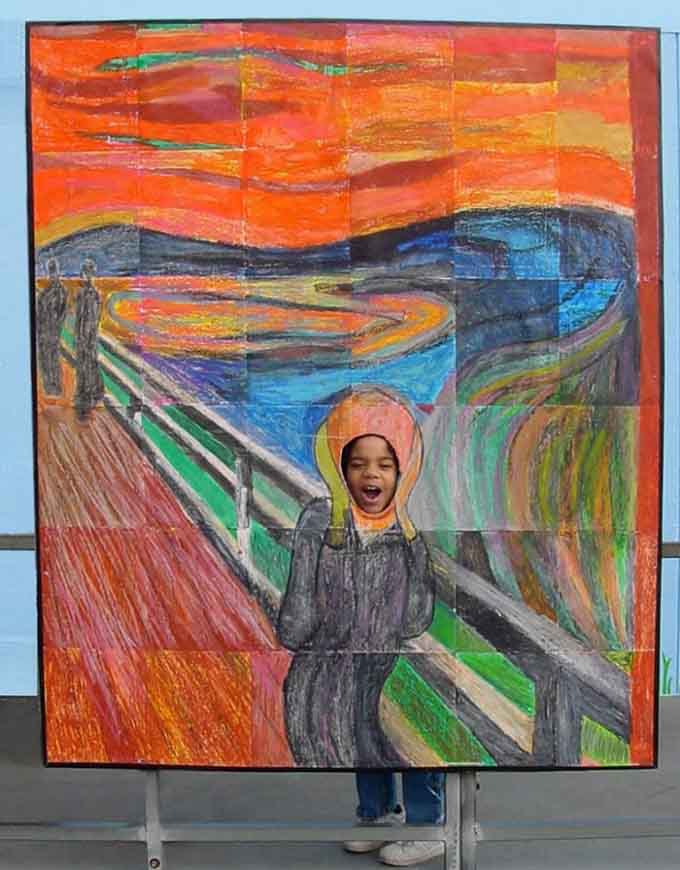 Munch was plagued by all kinds of illnesses throughout his life, and at the age of 66, he suffered from an intraocular hemorrhage in his eyes. Due to this, his vision was obscured and appeared as blood clots and splotches. True to his nature of turning adversity to art, Munch recreated these visual effects in his art, in the form of circles and waves of different colors. Art Projects for Kids brings in a lot of colors in this beautiful project that kids are sure to love. 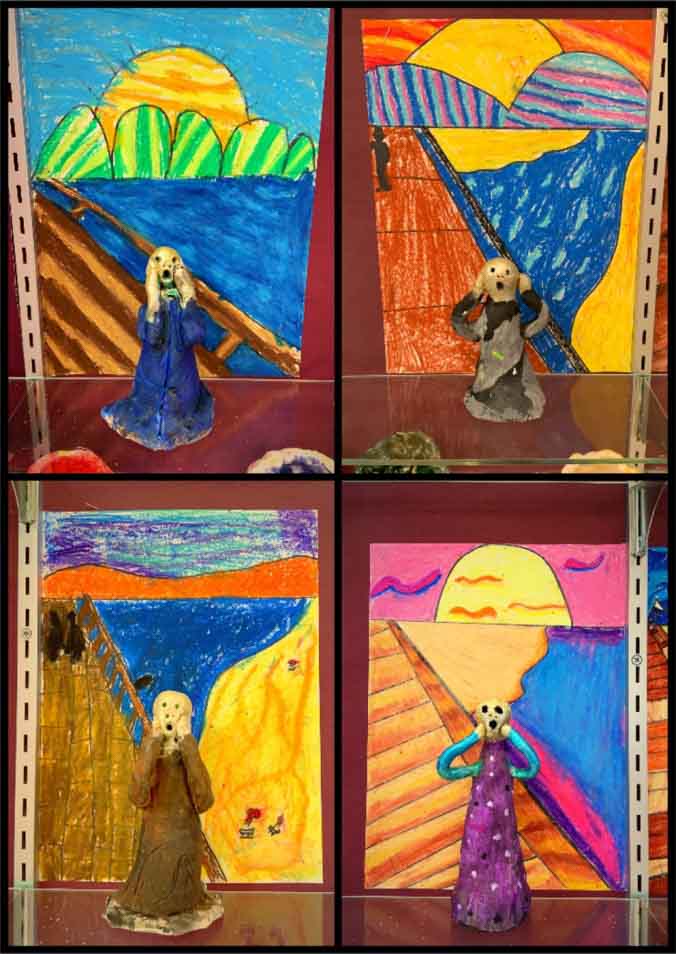 Munch did ‘The Scream’ in four painting versions and many lithographs. Due to the high value of the pieces, a couple of them were even stolen over time, although they were recovered later. You can also make multiple versions of The Scream, using oil pastels and a 3-D figure, as shown in Mona Lisa and More. 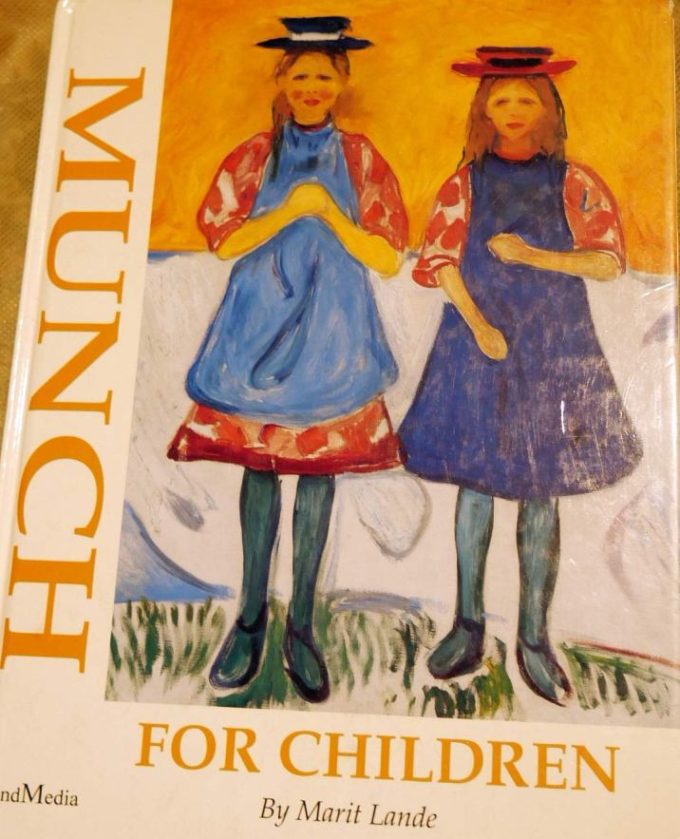 One of the best ways for children to learn about artists and their work is through books, and this one does a good job in communicating the essence of the work of Edvard Munch. The book is filled with beautiful illustrations of Munch’s most popular works obtained from museums around the world. Kids can pore over each page, noticing all the little details in it. 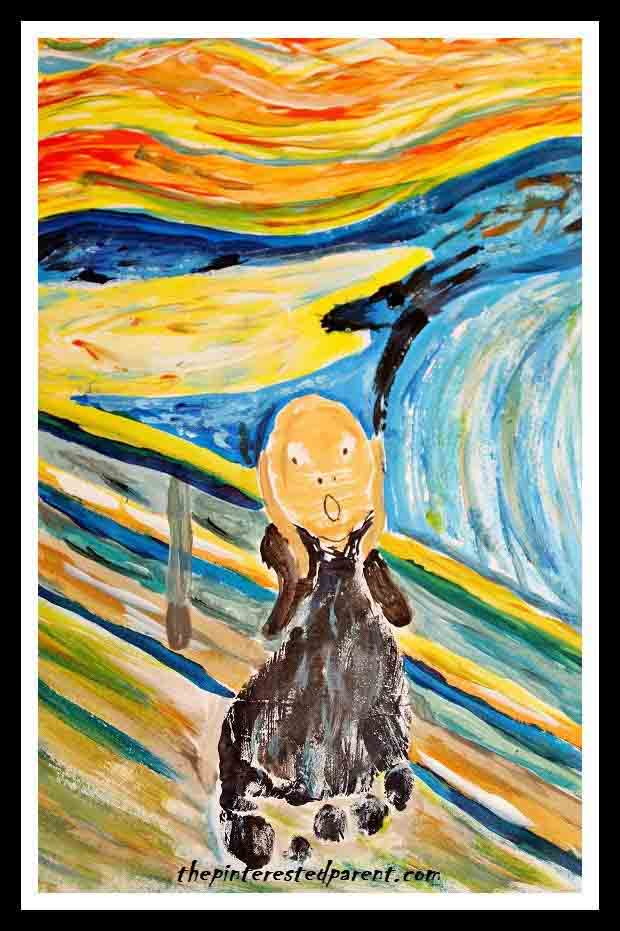 Footprint art is a great way to get little kids involved in art projects, and The Pinterested Parent has the perfect one to learn about Edvard Munch! You can also explain the story of where the inspiration for ‘The Scream’ came from. Munch was walking down a road at sunset, when he noticed the colors and everything around him changing. He felt it like “the enormous, infinite scream of nature”, and that’s how the painting was born!

9. Halloween Costume Inspired by The Scream 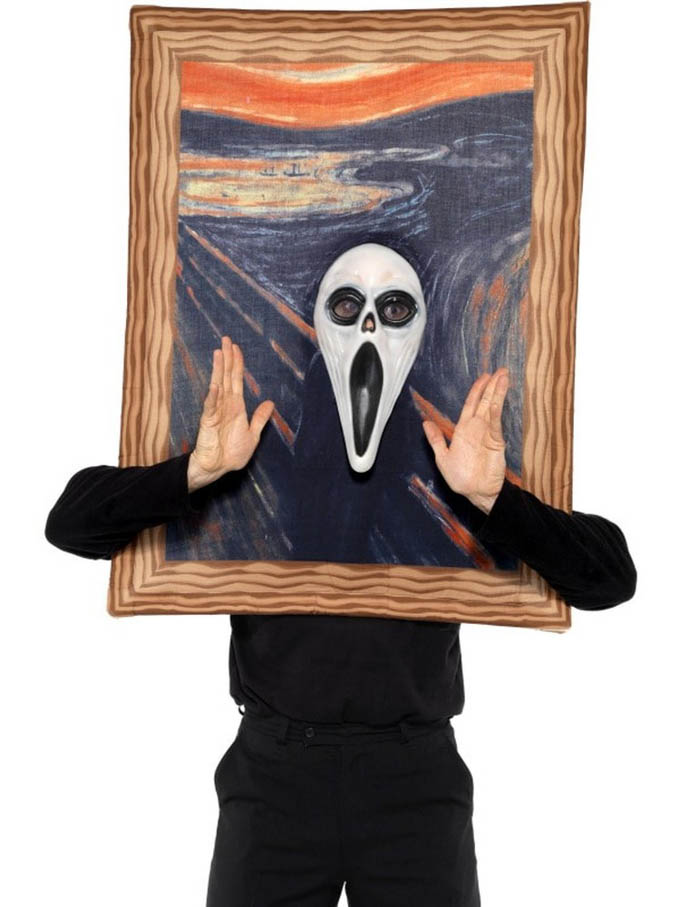 Munch faced a fair deal of criticism during his lifetime, especially in his early years of painting. Even his father didn’t approve of Munch’s chosen profession, and neither did his community. Every painting brought on a fresh wave of criticism, but Munch took it all in his stride. He found it ‘amusing’ that “something as innocent as painting should have created such a stir.” Bring alive this cheeky aspect of Munch’s personality by creating a Scream-theme costume, as done by The Culture Trip. 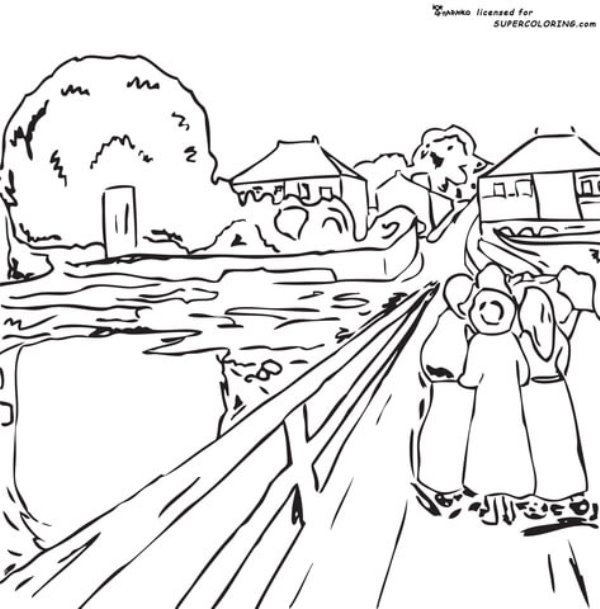 This coloring page from Super Coloring Pages is a copy of ‘The Girls on the Bridge’, another one of Munch’s most popular works. This scene is a representation of the bridge at Aasgaardstrand, which looks like this even today. Although ‘The Scream’ is considered an icon of art, there are many other works by Edvard Munch that are beautiful and revealing of his talent. 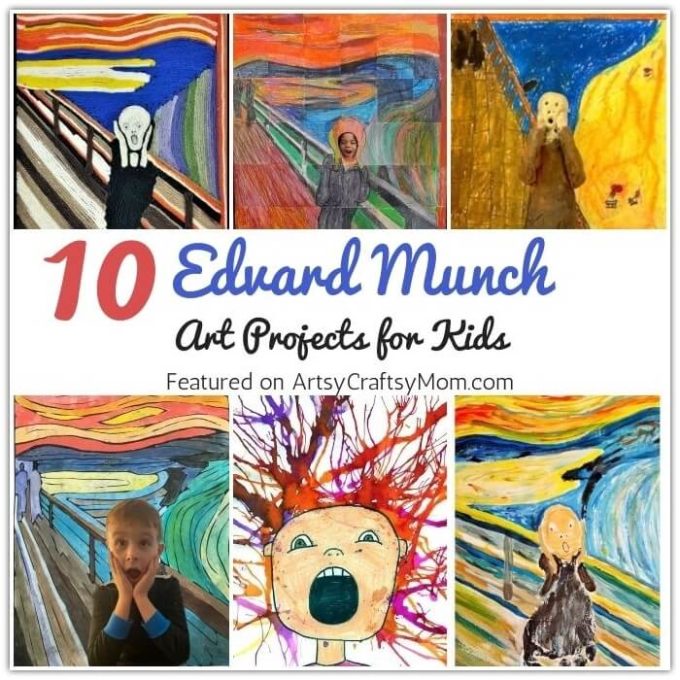 Munch suffered from both physical and mental illnesses, and they plagued him throughout his life, from childhood to old age. But he always found a way to display his emotions – through his art. Kids will learn a valuable lesson of how art is an effective medium to express themselves, and also that they can always turn adversity into art. Isn’t that a lovely lesson?