I know I’ve been really irregular the last week. Had a new project to work on & this party to plan..
We’ll actually, the whole party was planned at the last min. My FIL’s trip kept getting postponed.. we were not sure if he would be here on sunday night or not. Then hubby dearest was not sure if he would be in town as he had a meeting in chennai to attend.. When things actually fell in place, it was already 7th Sept. Then the mad rush for a party hall that serves only veg food. Lil P is mad abt dora and I thought why not have a party with that theme? So first I created the e-invite 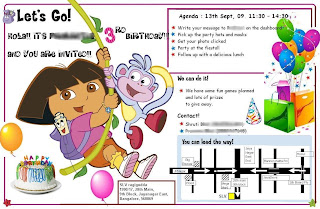 Once the invites were out, I had to plan the gifts, games & decor. For return gifts, I bought Dora coloring books, Dora story books, Dora bracelet , Dora stickers from jayanagar shopping complex. Borrowed Divs idea and pasted dora stickers on voilet paper bags.

For the games, i had a lot of dora stuff at home. We played the “piece the dora puzzle” where each kid had a piece of puzzle and they had to complete the puzzle in a group. the fastest group won! 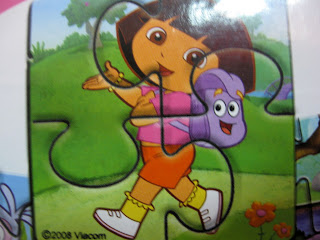 Then we played the passing the parcel, except we passed around a dora hand puppet that we had at home. and to the tune of Dora theme song. 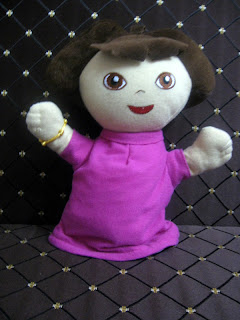 Then we had a Dora ABC treasure hunt. Again I had the Dora ABC game at home. Each kid had to pick up an alphabet from a bag & then run around the stage to find the object starting with that alphabet. 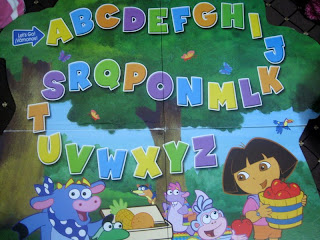 By this time most kids were tired and so I gave them some dora coloring pages to color away.

Now the tough part.. Decor!! It was too late to call a party organiser ( already 10th Sept by the time we finilased our list & hall). i called up couple of guys if they had any decor to go with the dora theme… None had. So we called a local guy in BTM to put up the balloons.. Only pink, orange and Voilet to go with the theme. I made a few posters & got them printed at local printexpress shop A3 print costed me 30 rs each. and put them up around the room. Finally the cake, Sweet chariot had a dora cake in their catalogue & voila! our party setup was ready.
Some pics.. 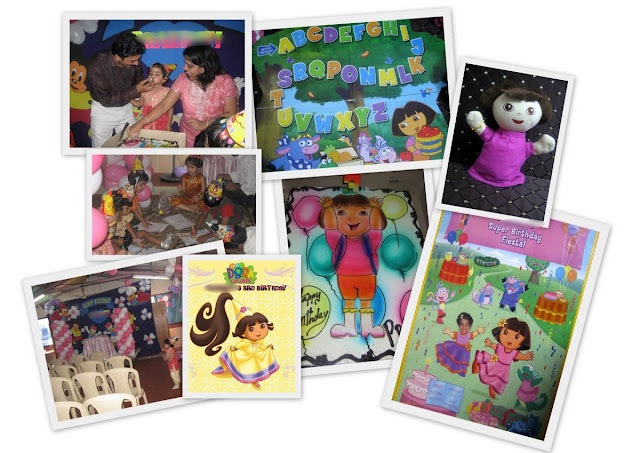 For prizes, I had got some fun certificates printed in A5 size and gave each girl a dora bracelet and the boys got a dora keychain. 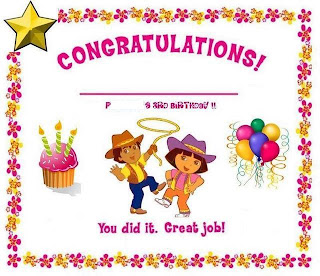 PS: I can make invites and posters for your kid’s birthday too.. Just give me a hint 2 weekends in advance so that i can work on the graphics! My hubby was mighty pleased with what all I could dish up considering the fact that i was working at office till 9PM everyday!! 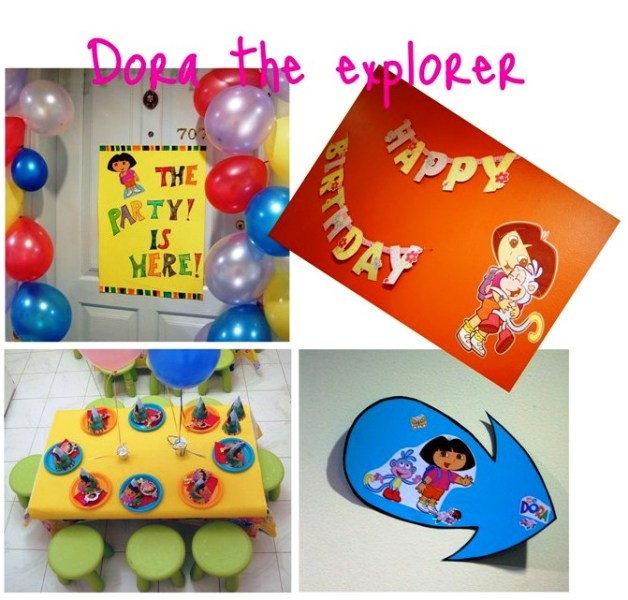