Get mystical with these stunning dragon crafts for kids! Perfect for the Chinese New Year and Appreciate a Dragon Day on 16th January!

One of the best things I love about exploring world cultures is about learning about myths and legends from different parts of the world. Nearly all of them have a ‘good versus evil’ theme, where truth always triumphs, and many involve the victory of the underdog.

However, when you go deeper, there are many differences as well. What is considered a monster to be slayed in one culture is a symbol of good fortune in another. Surprised? We’re talking about dragons!

Dragons have been part of folklore for centuries, and there is a lot of difference between Western depictions of dragons and the Eastern versions. In the west, dragons are fire-breathing, winged monsters that live in caves and wreak havoc, and need to be killed – leading to the saying ‘slaying of dragons’.

On the other hand, Eastern culture like the Chinese feature dragons that are more snake-like, wing-less and flame-less. These dragons are believed to bring rainfall and prosperity and were considered the most auspicious animals. In fact, Jackie Chan and Bruce Lee’s Chinese names include the Chinese word for dragon!

Since the Chinese New Year is coming up, it seems to be an appropriate time to learn a little more about dragons in Chinese culture. What’s more, 16th January is ‘Appreciate a Dragon Day’ – so it’s only right that we do what the day asks of us! That’s why we’ve rounded up 15 of the most dramatic and colorful dragon crafts we could find, perfect for kids and parents to make at home! 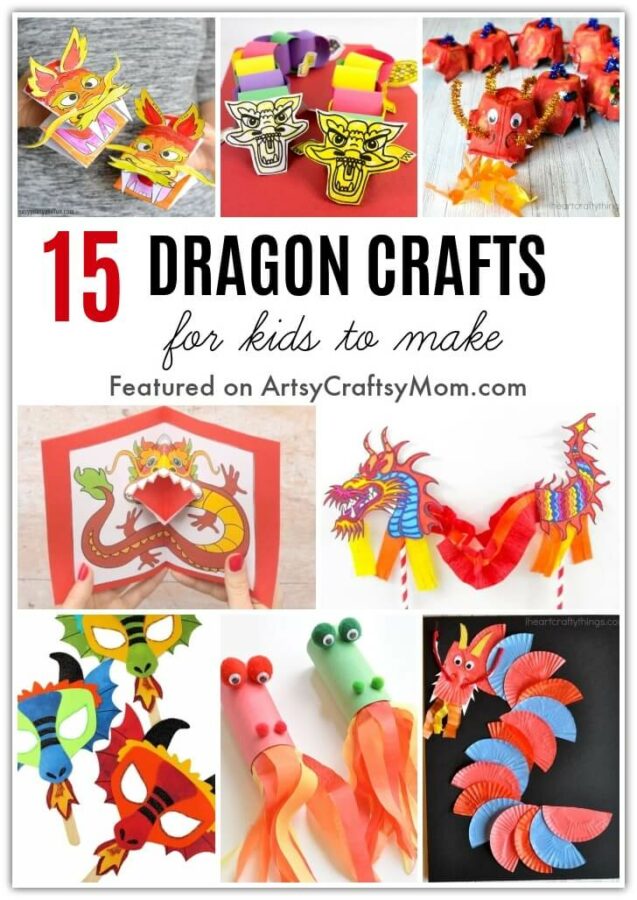 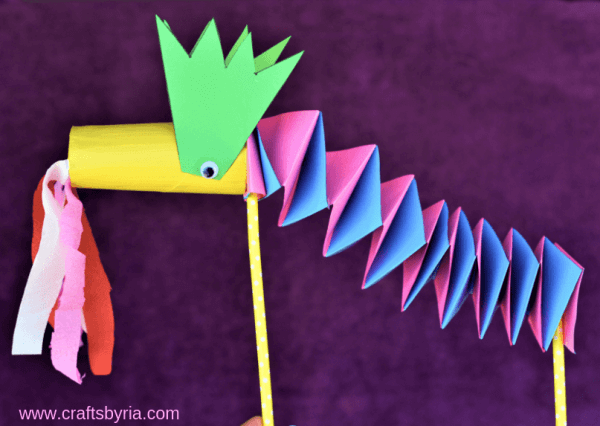 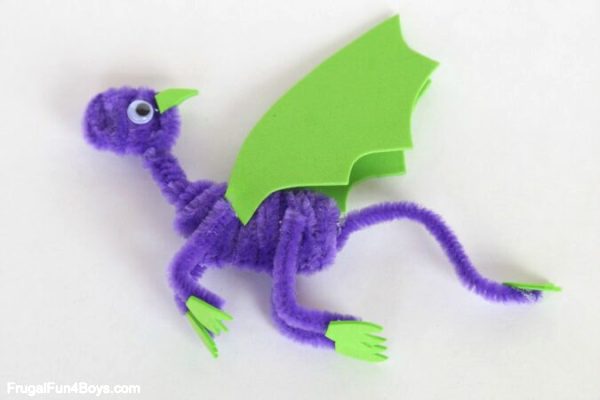 This pipe cleaner dragon from Frugal Fun 4 Boys is a simple project, although it’s not exactly representative of Chinese dragons. We love the googly eyes on this one, though! 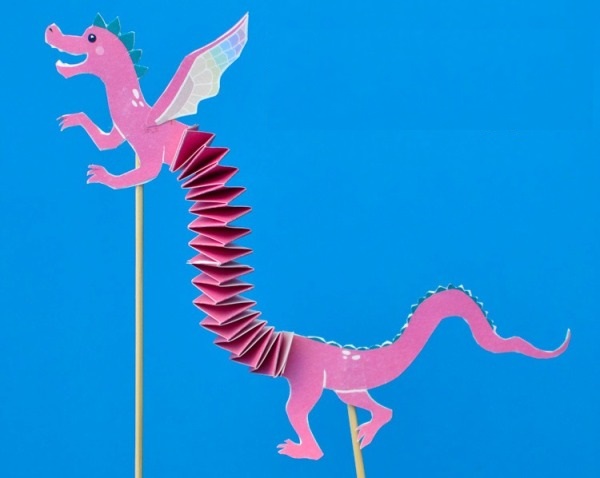 This dragon from Adventure in a Box is almost a hybrid of Eastern and Western dragons! The limbs and wings of western dragons meet the slithery movement of the snake-like eastern ones – a mix of cultures in one craft! 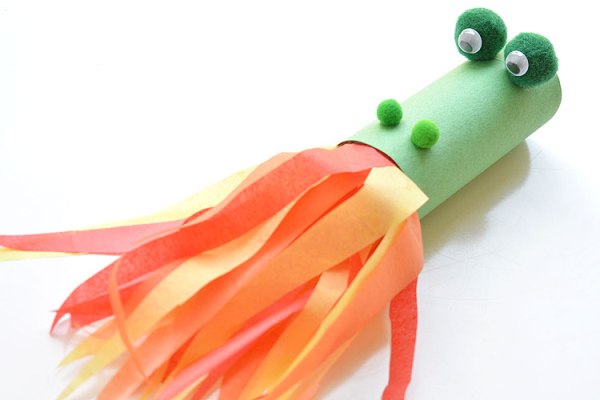 The term ‘breathing fire’ refers to a person getting furious, but this cute dragon from One Little Project is not at all angry! We love the use of the colored paper to create the illusion of flames emerging from the dragon’s mouth. 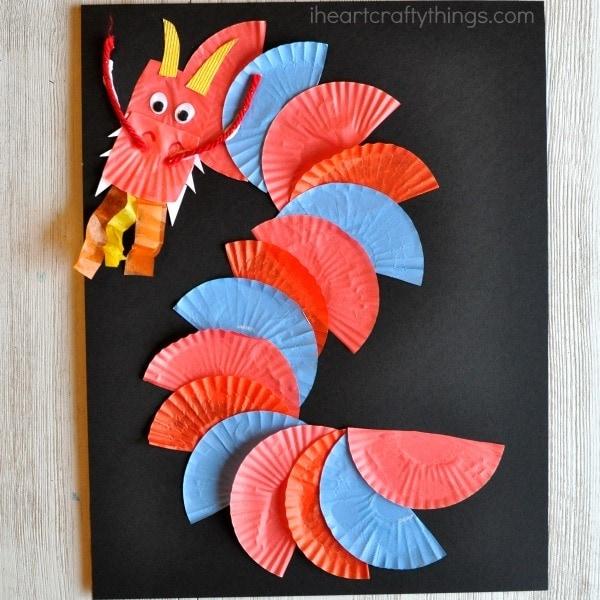 One of the biggest occasions featuring dragons is the Chinese New Year celebrations. During this time, many dancers come together to create a long, winding dragon that goes all the way down the road. I Heart Crafty Things creates a similar winding dragon out of cupcake liners in bright colors. 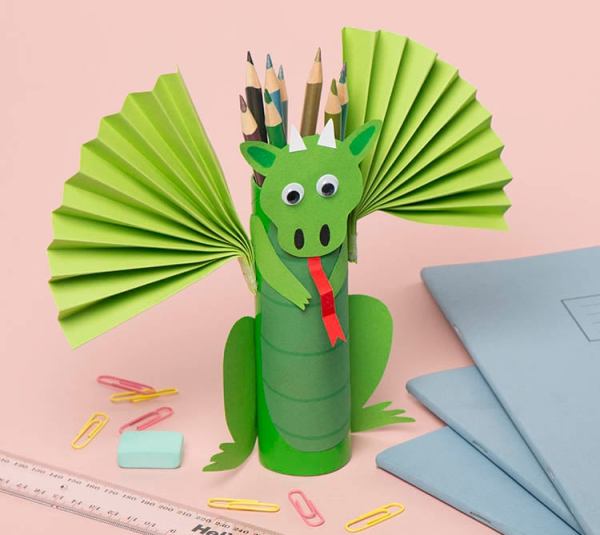 Dragons are considered water spirits in Chinese culture, and they are believed to bring rain and prosperity. Due to this, dragons are worshipped in periods of drought and small dragon figurines are kept in homes as signs of auspiciousness. If you’d like a dragon on your desk too, try making this pencil holder from Baker Ross. 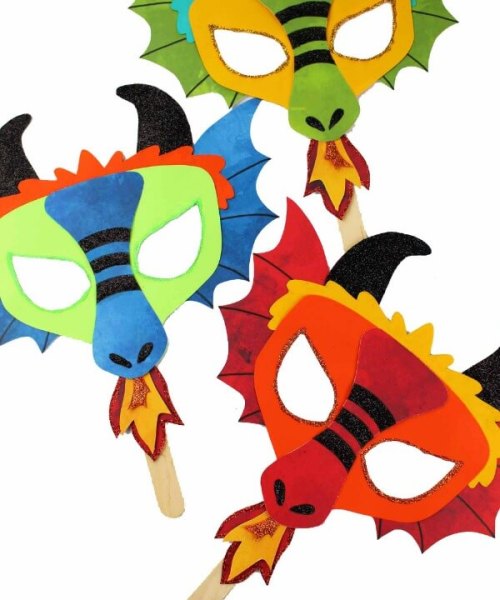 The Chinese consider themselves descendants of the dragon, and parents even go so far as to plan for their babies to be born during the Year of the Dragon! Ruffles and Rainboots gives you a way to turn into a powerful dragon yourself, with the help of these colorful masks. 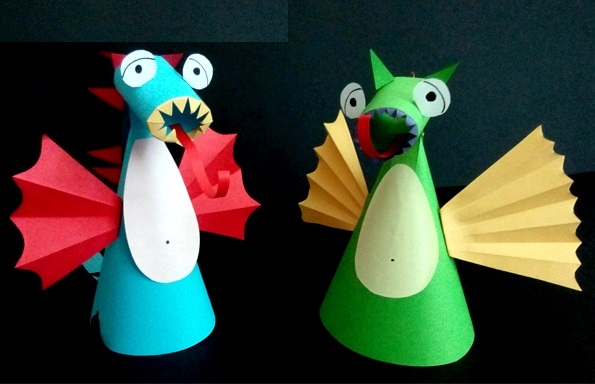 In the olden days, using dragon motifs was considered a privilege accorded to royalty, and commoners who used them were punished, even executed. However, it is not the case today, so you can go ahead and fearlessly have a dragon proudly sitting on your desk! Get the instructions to make this dragon at Krokotak. 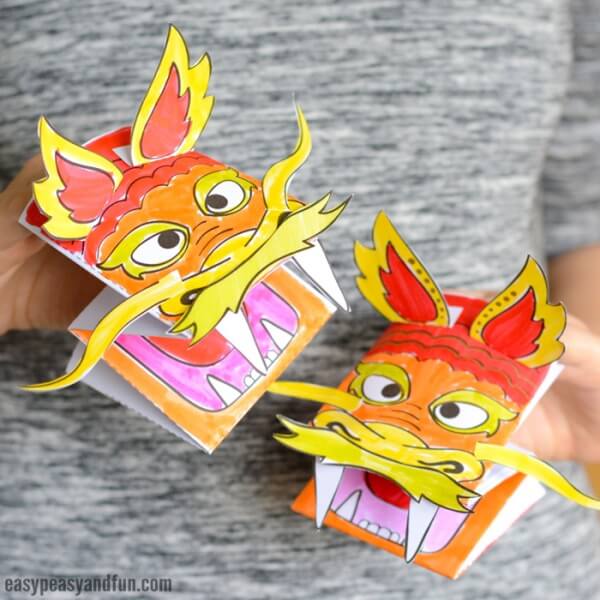 One story about dragons goes like this: there lived a nobleman who was obsessed with dragons, decorating his entire home with dragon symbols. A certain dragon was so impressed by the nobleman that he decided to visit him – unfortunately, the man was so shocked and terrified by the surprise visit that he ran away! If you’d like to terrify someone similarly, Easy Peasy and Fun has just the project for you! 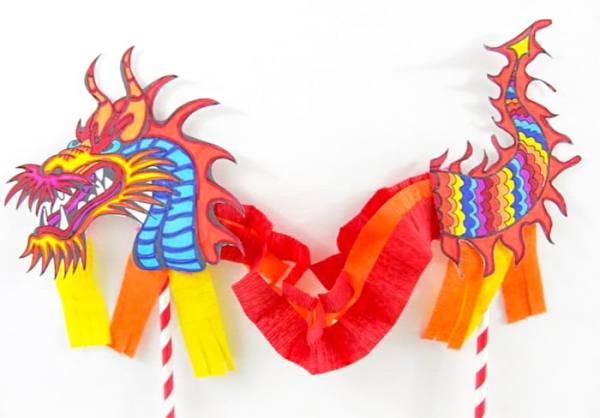 Dragons are identified with qualities like brightness, strength and the colors red and yellow, due to which they are often associated with the sun. This is why the summer solstice is celebrated with dragon boat races, featuring boats painted with colorful scales. If you’d like a colorful dragon of your own, try this beautiful craft from Made with Happy. 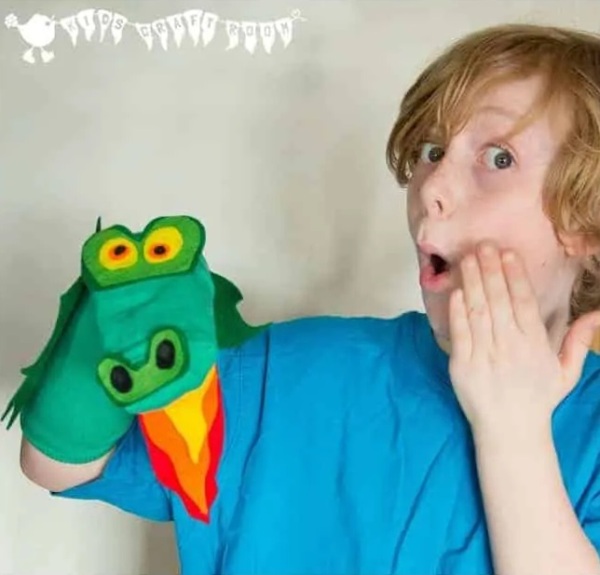 As mentioned earlier, dragons are a part of several cultures, especially Norse mythology and other far Eastern cultures. They also feature in mythological tales from India, Bhutan and Tibet. Make up your own dragon tales with a cute sock puppet from Kids Craft Room. 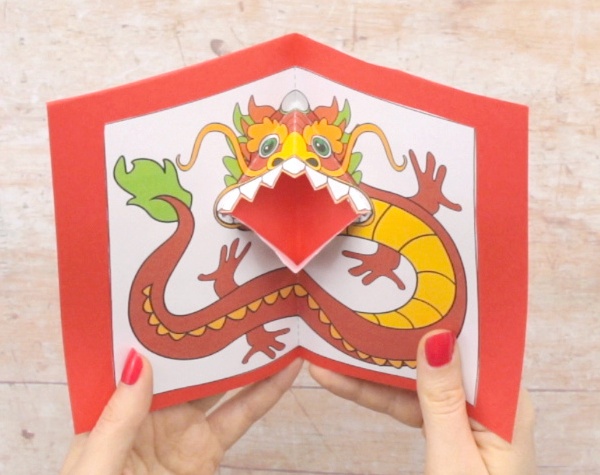 The Chinese New Year is based on the Chinese zodiac, where every year is associated with a certain animal. Regardless of that, it is always auspicious to include a dragon in your celebrations, like Easy Peasy and Fun has done in this lovely pop up card. 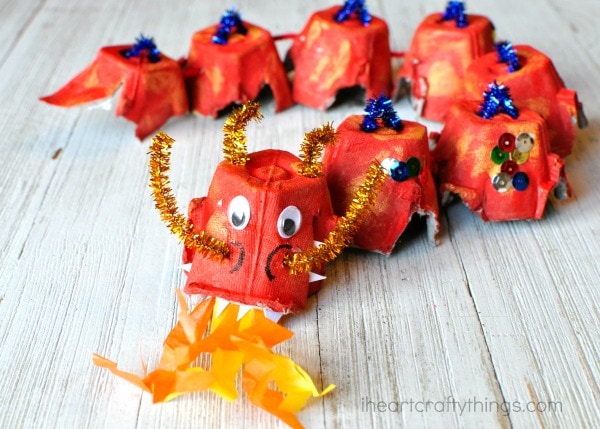 This project from I Heart Crafty Things is a gorgeous representation of a long, winding Chinese dragon dance, complete with golden antlers. In fact, the ancient Chinese believed that the dragon was a mix of several creatures: camel, snake, fish, eagle, tiger and even cow. 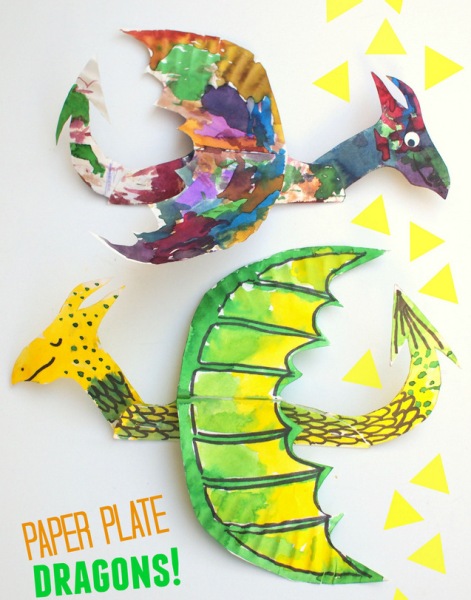 Red is an auspicious color for the Chinese, but what’s interesting is that many historical artefacts featuring dragons aren’t necessarily red. Pink Stripey Socks creates some dragons out of paper plates and chooses to give them some different colors, and you can go with your favorite picks too! 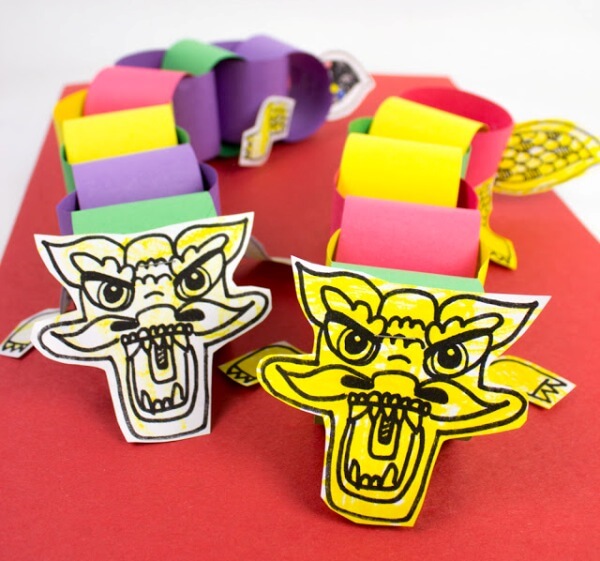 We absolutely love these dragons from Pink Stripey Socks – they look like perfect representations of the dragon dancers! Dancing dragons are often made of wood and silk, and look beautiful and glamorous. 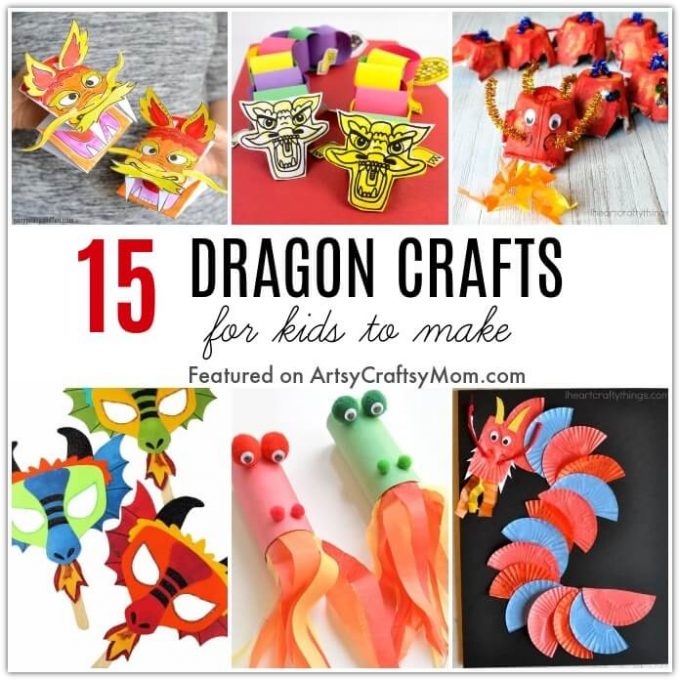 I’m sure you’ve noticed one thing about all the dragon crafts featured here – they’re all incredibly gorgeous! It’s amazing how something that is seen as a monster in some parts (Game of Thrones) can be an epitome for beauty and splendor in other parts of the world. As we enter this New Year, let’s try to imbibe some of these dragon qualities and become the most beautiful and powerful versions of ourselves! 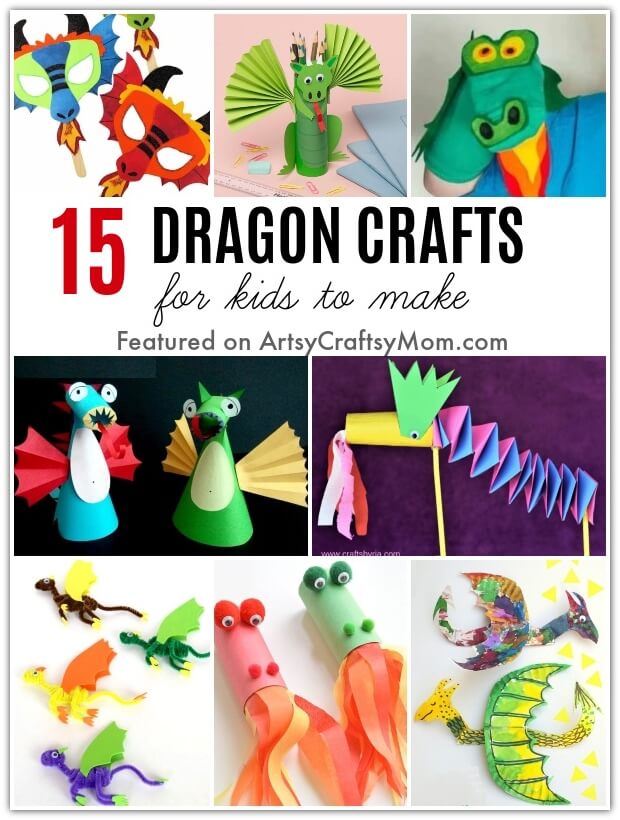