Our collection of Germany Crafts for Kids is ideal to help you learn about this amazing country! Perfect for German Unity Day and Oktoberfest!

Sometimes, some people or organizations make things that are so perfect that they become associated with that item. For instance, you can’t help but think about the Swiss when someone mentions chocolate, or about Egypt when anyone talks about pyramids. On that note, only one name comes to mind when you think of cars, sausage, or classical music – Germany!

Yes, Germany is known for all that and much more. For instance, did you know that Germany has more football fan clubs than any other country? Or bridges and canals? Or international tourists? Well, that’s Germany for you!

German Unity Day is Germany’s National Day, commemorating the unification of Germany into a single state. Oktoberfest is the world’s biggest Beer Festival, held every year in Munich. St. Martin’s Day celebrates a special saint and comes on the heels of Halloween. With so much happening, we think it’s only fair to spend some time on these grand Germany crafts for kids! 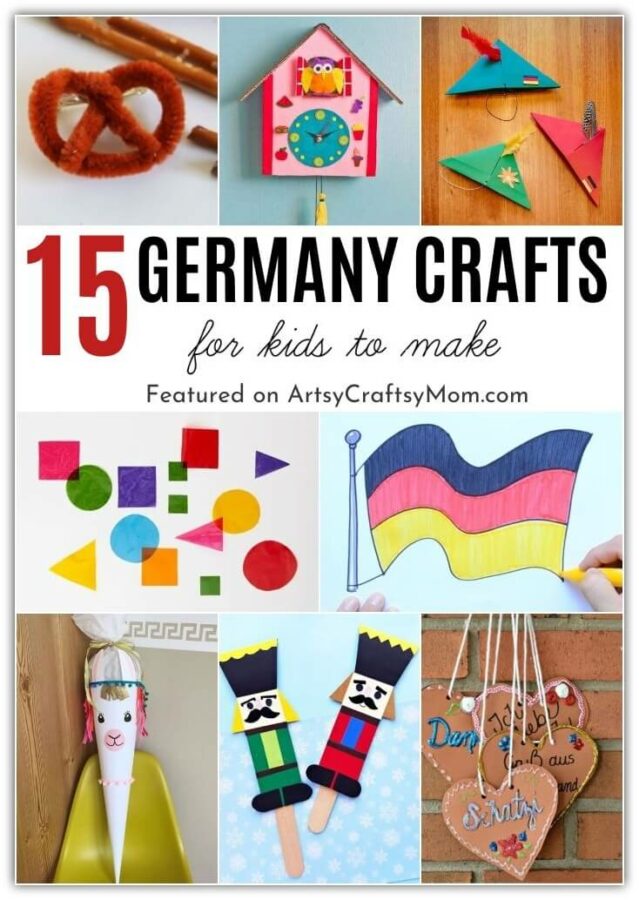 1. Back to School Cone (German Schulte) 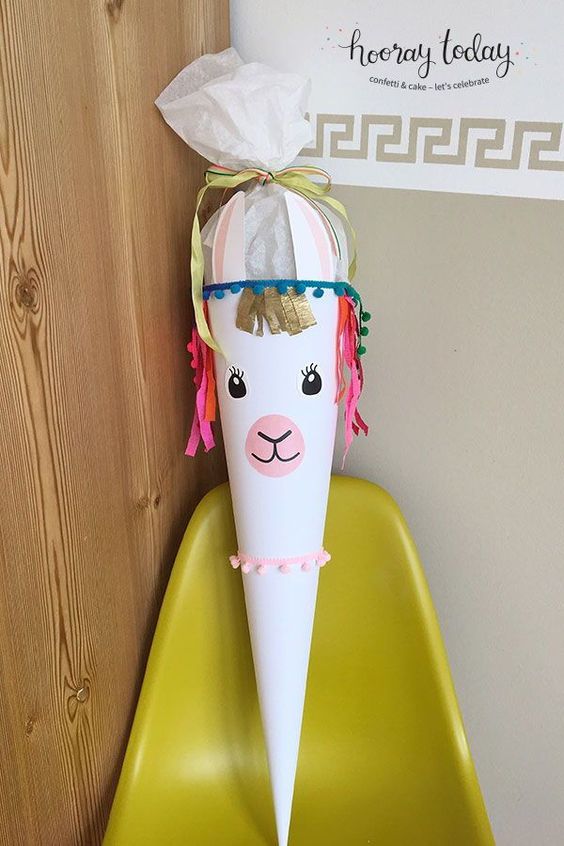 Back to school is an exciting time in any country, but the Germans know how to turn it into a celebration – with a German schultute! This is basically a hollow cone that is filled with small gifts and school supplies for the new student. The schultute is meant to ease the child’s anxiety and make him or her excited about their new classes. Hooray Today brings us a beautiful llama-themed schultute that you can fill with cute little treats! 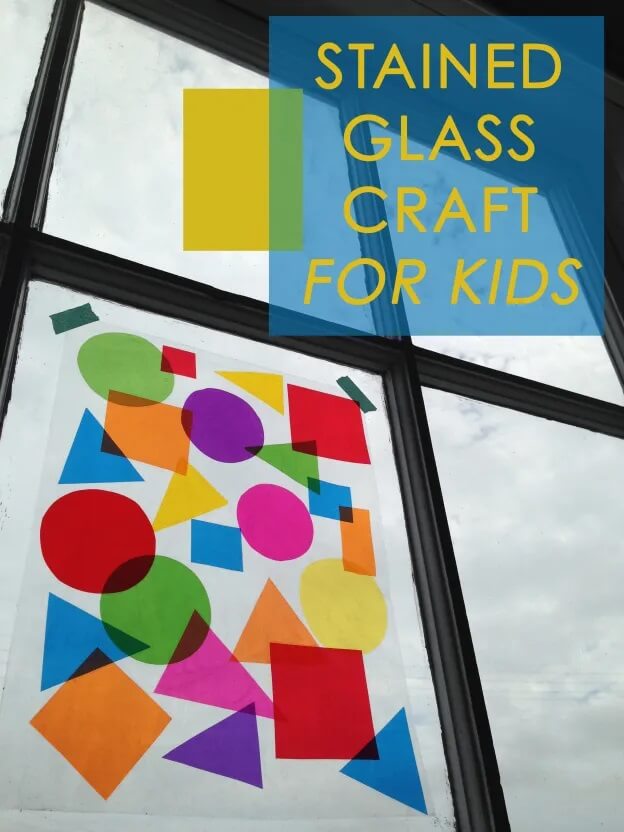 If you’ve ever visited Germany, you’ll have noticed that they have some gorgeous buildings and structures, and some of them are in the Bauhaus style. This style features simple geometric patterns, straight lines, and primary colors. This no-fuss style has been captured in this lovely stained glass project by Tea, making it a great addition to this list of Germany crafts for kids. 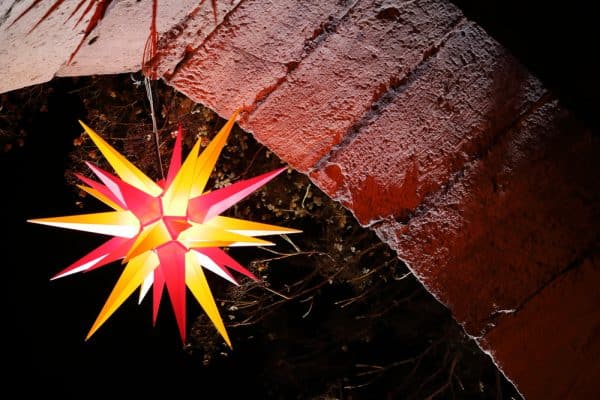 Stars are extremely common during the Christmas season, but if you look closely, you’ll find that many of them follow the Moravian star pattern. Moravian stars, also known as Herrnhut stars in Germany, were first created as a geometry project in school, and then went on to gain cultural significance. Traditional Moravian stars are made with 26-points, but you can try out the much simpler version at Travels with the Crew! 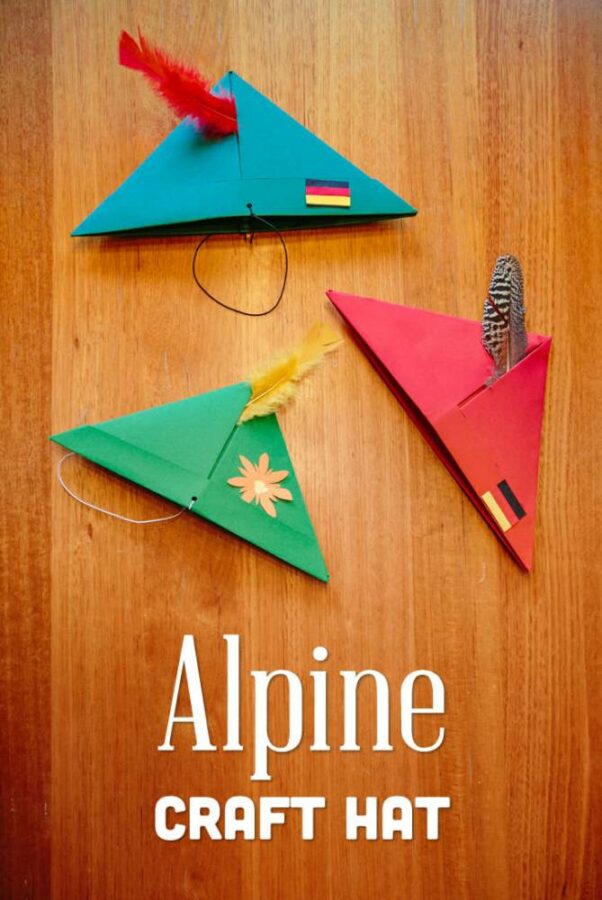 Oktoberfest is one of the most enthusiastically celebrated festivals in Germany, and it is believed that 7.5 million liters of beer are consumed during the festival! It’s not surprising, since Germany has over 1,500 types of beer. If you’re planning to have an Oktoberfest-themed party, it’s a good idea to dress up for the occasion, and this Alpine hat from Golden Carers would make the perfect accessory!

ESL Kidz has a bunch of printables that are a good educational addition to this list of Germany crafts for kids! It’ll help you learn more about the amazing country that is Germany. For instance, did you know that Berlin is Germany’s capital and that it is 9 times bigger than Paris? Yes, check out the printables for more! 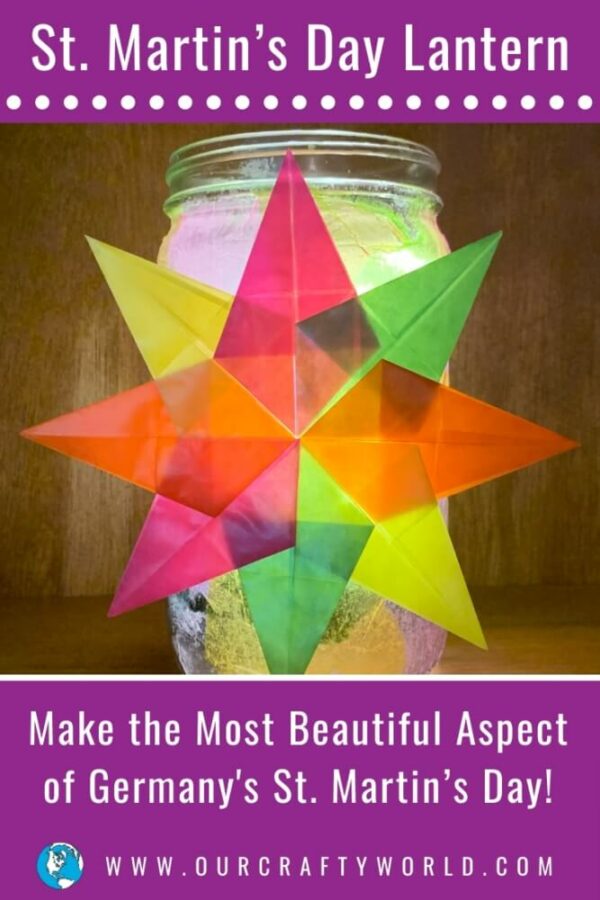 St. Martin’s Day is based on a Roman soldier who later became a bishop in France. It is said that he was so kind-hearted that he cut his cloak and offered one half to a beggar to cover himself. St. Martin died on 8 November but was buried on 11 November, which is observed as St. Martin’s Day today. The festival is celebrated with a Laternelaufen, or procession, of children holding handmade lanterns, much like the one shared by Our Crafty World in this project. 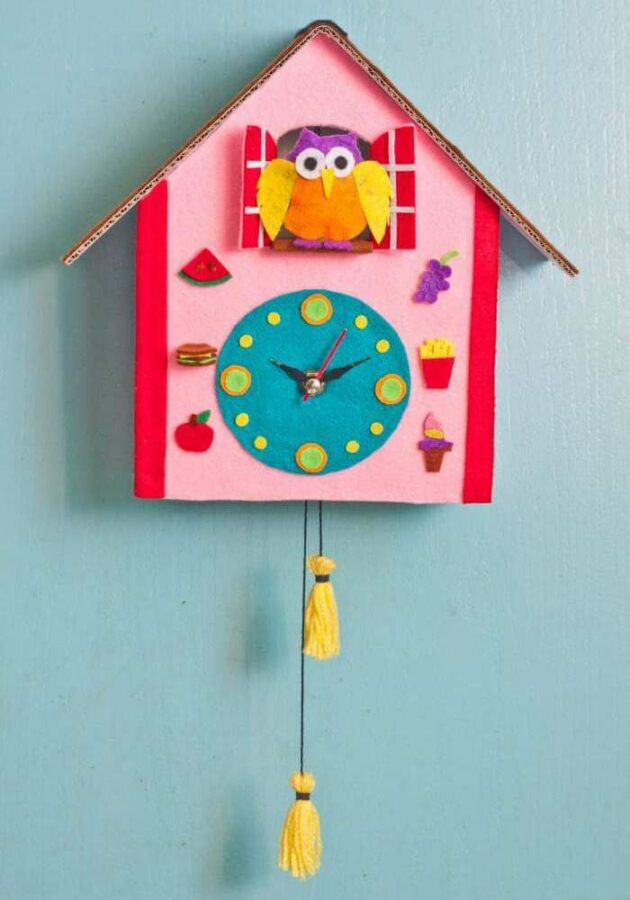 All of us remember the first time we saw a cuckoo clock, and how we looked at it in awe! Did the cuckoo live inside? How did he know it was time to come out if he was inside the clock? It will please you to know that the origin place of cuckoo clocks is the Black Forest area in Germany. The Bavarian Clockworks website adds a cute little cuckoo clock craft to this list of Germany crafts for kids, and we love it!

You have probably seen this costume featured by DLTK Kids – it’s called lederhosen. As you can see, lederhosen are short leather pants, worn mainly on festive occasions by men in German-speaking countries. Classic lederhosen is made of deer leather and is quite valuable, making it an heirloom to pass down to generations! 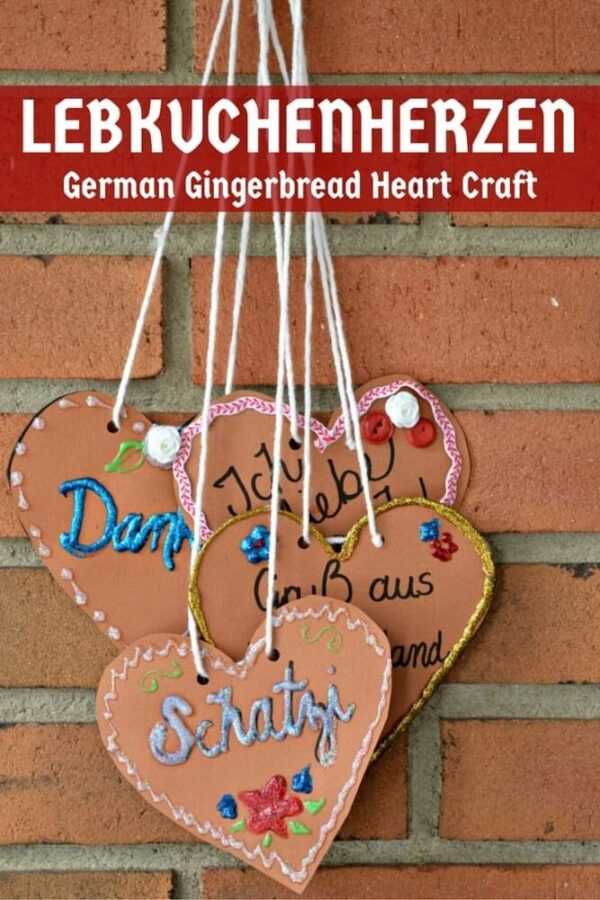 No Christmas celebration is complete without some gingerbread cookies, and Germany has their own version, the Lebkuchenherzen! These are soft, heart-shaped gingerbread cookies, made with a unique mix of spices. Germany is quite famous for its baked goods, and has over 300 kinds of bread and 1,200 kinds of pastries! Mad in Crafts gives us a pretend-play version of the Lebkuchenherzen, which look quite good! 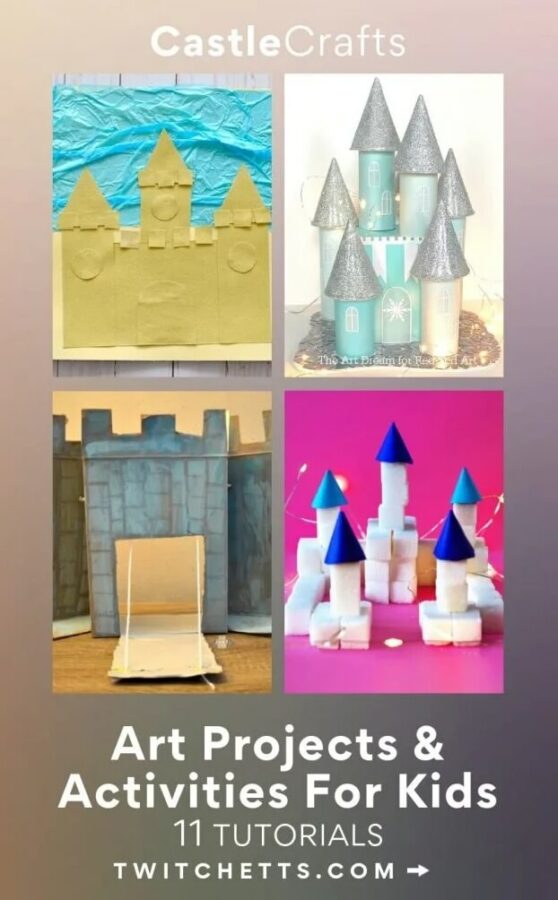 As mentioned earlier, Germany is known for its beautiful buildings, and this includes the many stunning castles in the country. In fact, Germany has over 2,000 castles, and these are top spots for visitors to the place. Twitchetts helps us create our own dream castle with this collection of castle crafts made with cardboard boxes. 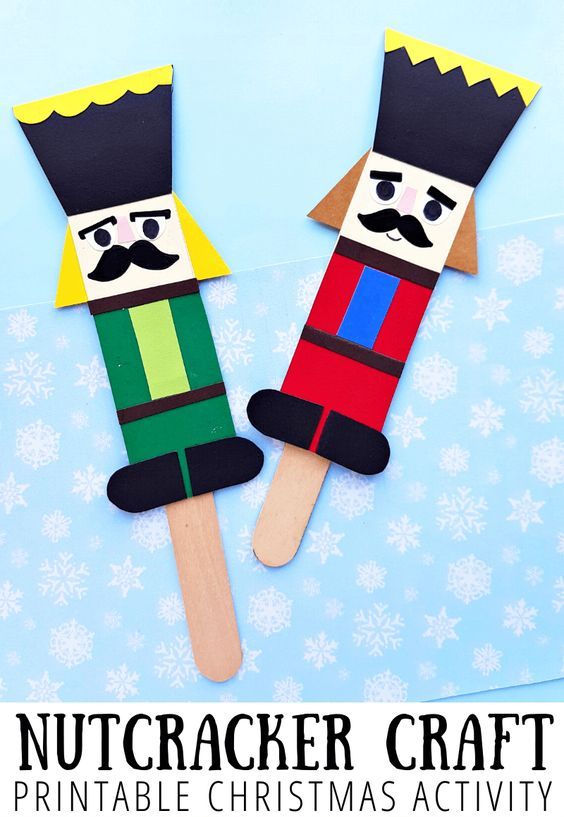 The Nutcracker ballet is quite popular around Christmas time, but did you know that the Nutcracker dolls actually originated in Germany? Germany has contributed quite a bit to Christmas traditions around the world, including the Christmas tree! If you’re looking for Christmas crafts or Germany crafts for kids, Little Bins for Little Hands gives us a printable to make an easy Nutcracker craft! 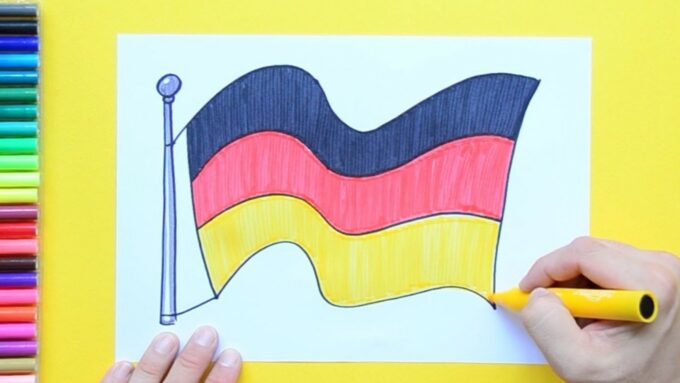 It’s interesting to learn about the flags of the world and their various meanings, and the same goes for the German flag too! Germany is a republic, and its flag is a tricolor comprising black, red, and yellow. Official government institutions also use a logo featuring a coat of arms, in addition to the tricolor. Learn how to draw the German flag with this tutorial from Art for All. 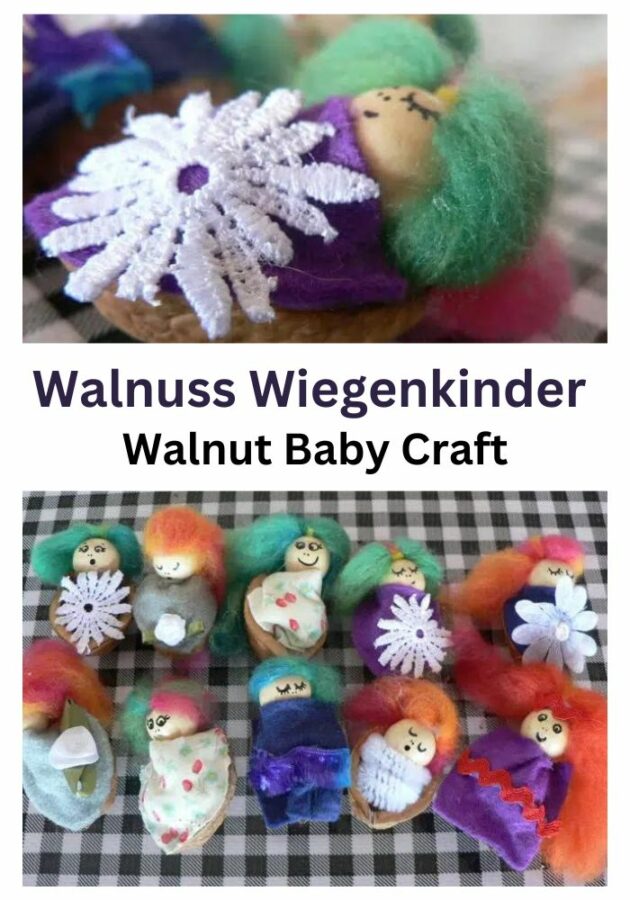 The Germans are fiercely proud of their culture and their traditions. Germans also value their artists, and they’ve had quite a few, like Bach, Beethoven, Brahms, Paul Klee, and Franz Marc. Germany has also produced a vast number of scientists like Einstein, Heisenberg, Kepler, Karl Benz, and Rudolph Diesel, as well as politicians like Karl Marx and Angela Merkel. In fact, Merkel is so popular that she inspired a Barbie doll based on her! Make your own cute walnut baby dolls, a traditional German craft, with this tutorial from Children’s Books Daily. 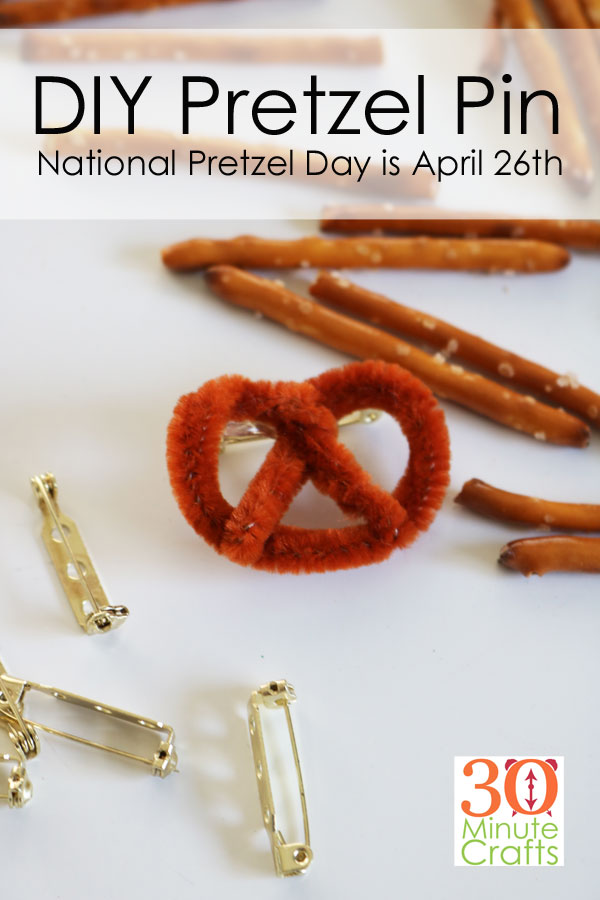 We can’t have a list of Germany crafts for kids without featuring pretzels, because Germans love their food – and how! There are over 1,000 types of sausage in Germany, and the currywurst is so popular there is a museum dedicated to it! Gummy bears were also invented in Germany, and Haribo has a program for children where they can exchange acorns for free sweets. Bring a bit of Germany into your home by making this cute pretzel pin craft from 30 Minute Crafts!

15. ‘All about Germany’ Printable Booklet 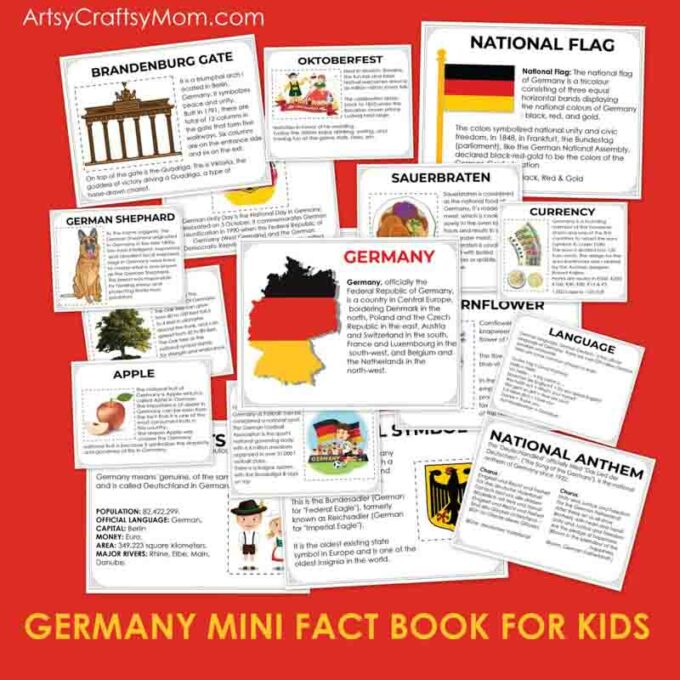 This “All About Germany” booklet is a great way to introduce young kids to the country, suitable for lower elementary grades. Each page contains a basic fact and related illustration. All graphics are in an outline format so that it’s ready to be colored like a mini-stick & paste book.  Use the printable from our October Bundle to print, cut, paste & learn! You can also laminate the sheets for extra durability. This printable is available for free for all our Club ArtsyCraftsy members.

About the MONTHLY BUNDLE & MEMBERSHIP:

We’ve launched our new membership site called – CLUB ARTSY CRAFTSY. The Club Artsy-Craftsy membership is like getting a new “ebook” of activity plans every month. It brings you seasonal activities from several places: brand-new printables, classic activities already on the website, and even featured activities from our members. The activities are designed for ages 3 to 14 years old, with variations offered for each activity. 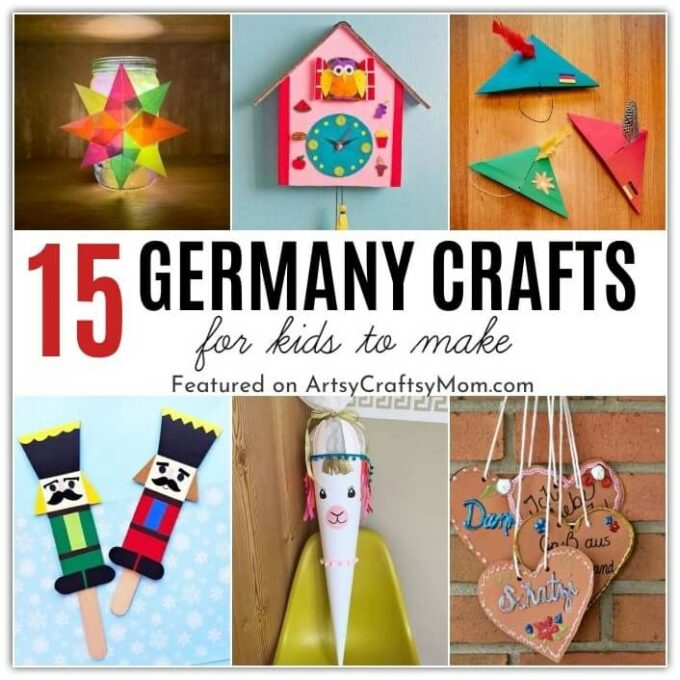 With printables, activity sheets, and craft projects, this list of Germany crafts for kids is a great way to introduce the amazing nation to young children and to get them more interested in learning about world cultures. If you’d like to know more, check out the German episode in National Geographic’s popular series called “Are we there yet?”. There are so many wonderful things to learn about this country, and you’ll never get tired of it! 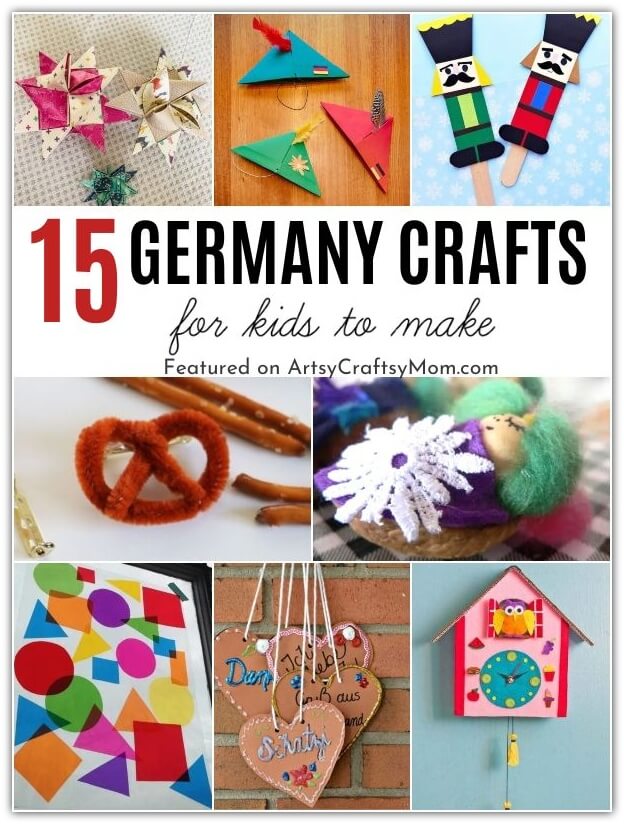 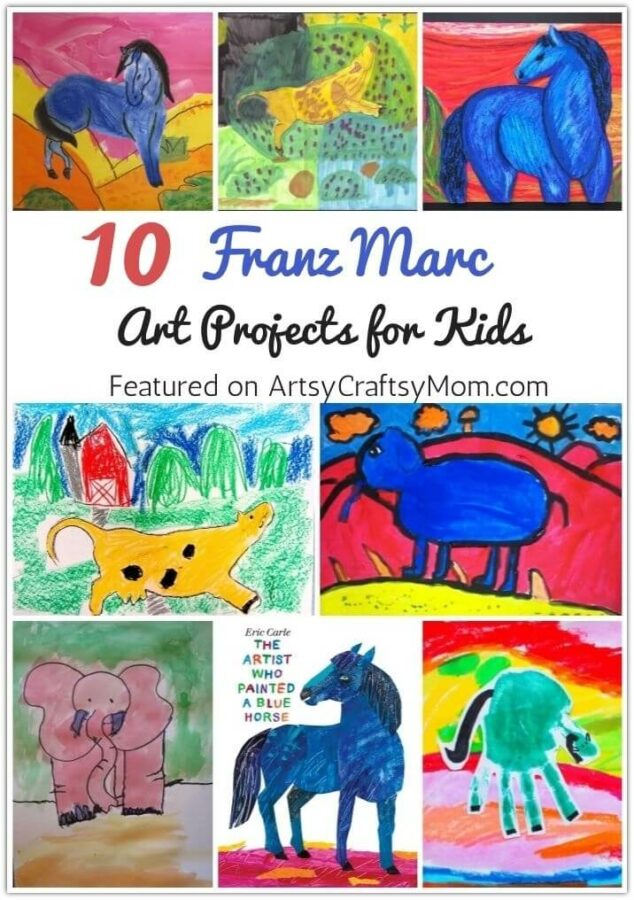 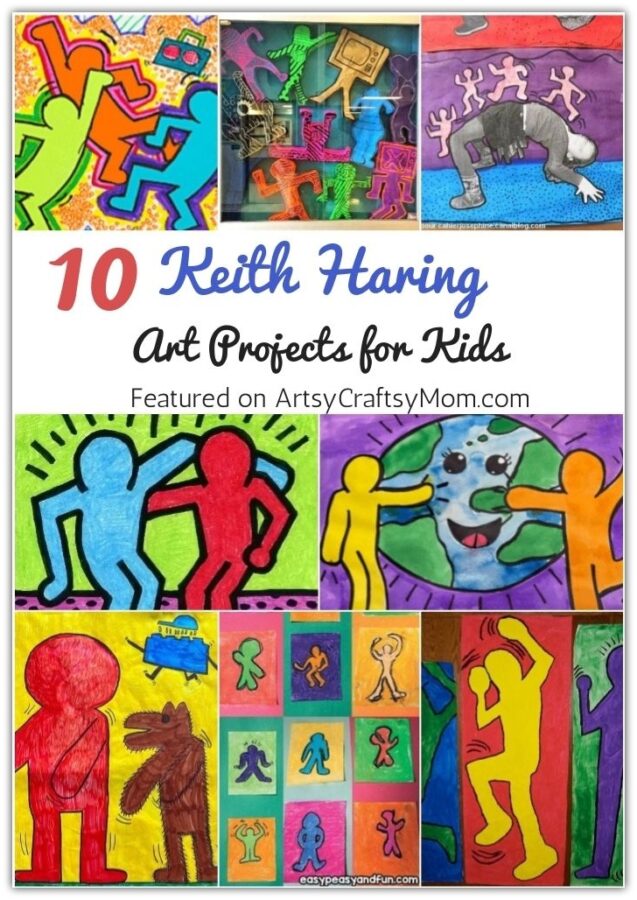 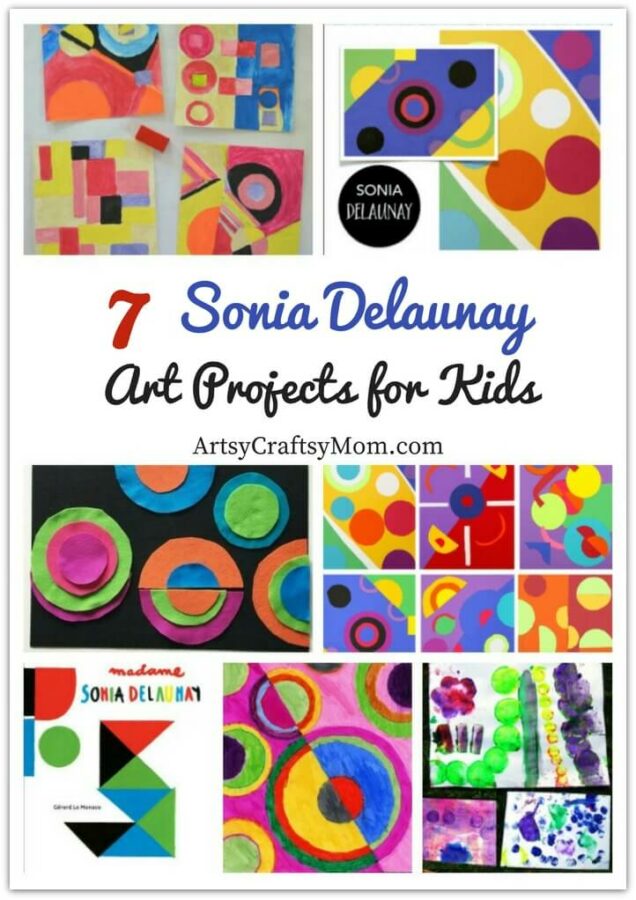 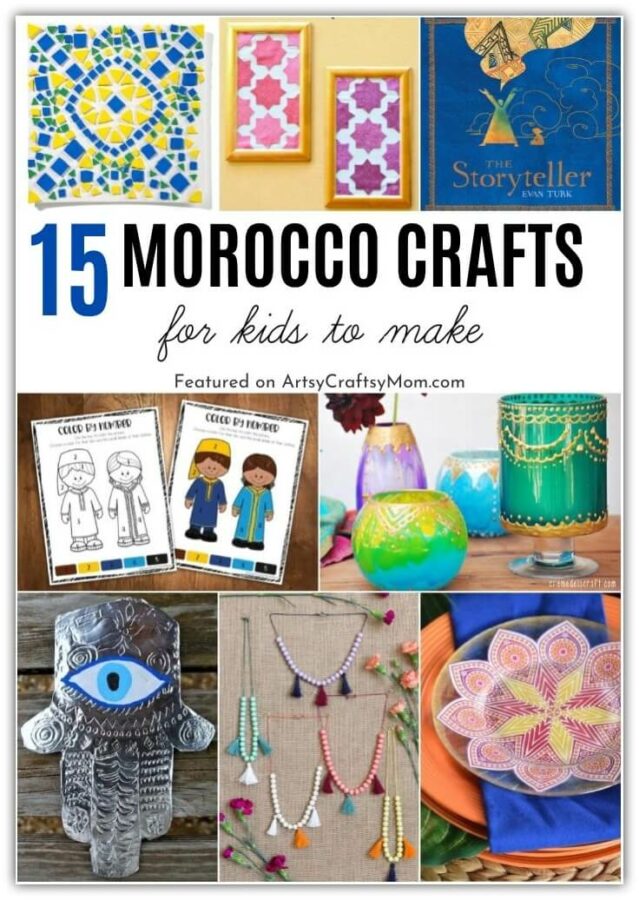