Lil P’s school had a grand party today. It was a party exclusive for granparents and kids. No entry for parents!! Lil P’s granparents ( both maternal & paternal stay in different cities… ohh so far away!) so I called up the school if someone else could attend instead.They agreed. But who do I invite??? Lil P used to stay with a family friend of ours, Asha aunty,  while I was at work for nearly an year before she moved to a day care this may. Aunty readily agreed and was so overjoyed at being a part of lil P’s party, it touched my heart. Even Uncle agreed to come cos he and Lil P were really close. It was soo sweet of them. I will be eternally thankful to them for this day.
The theme was egyptian, and the school was decorated like a scene right out of egypt.. some pics.. 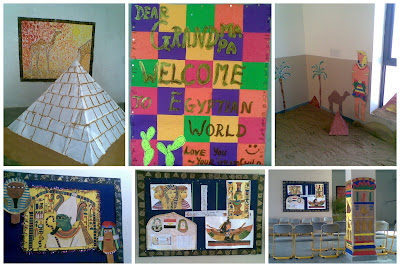 It was so much fun. Lil P’s class danced to ‘walk like an egyptian’ , sang ‘Jana gana mana’ and some rhymes. It was their first public performance and it was sooo cute to watch. [We were also allowed inside once we reached the venue] . Lil P was ok till she noticed me n then she started crying and refused to go back. Anyway it was fun watching all the kids get so excited. The school also showed videos of kids saying “I love you grandpa – grandma” Her grandparents would have loved it..
They also painted some egyptian mirrors, ate some snacks and had a great time.Lil P’s antics captured on the mobile. 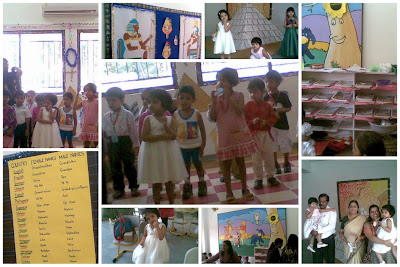