You are here: Home / Craft Ideas For Kids / How to make a Halloween Shoebox Diorama

Halloween’s nearly here and everyone’s preparing to say ‘Boo’! It’s fun to look forward to a celebration, isn’t it? There’s such a buzz in the air, everyone’s in an upbeat mood and the best part – special crafts!!

When it’s Halloween, the crafts aren’t restricted to paper and scissors either – there’s a host of spooky treats out there! So we assume you’ve already started sampling some of these goodies, hence we’ll not focus on food today. Instead, we’ve got an easy but really fun-to-make Halloween Diorama for you!! 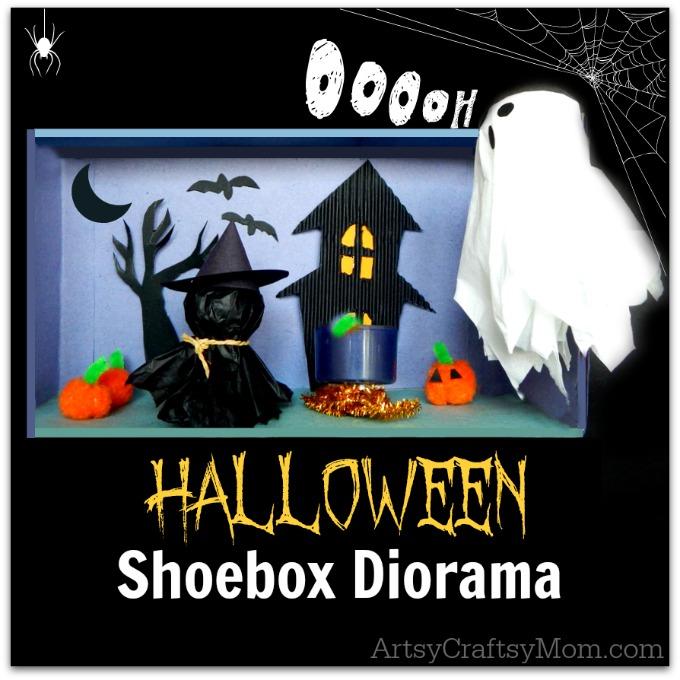 Dioramas are among our favorite crafts – they’re multi-dimensional and you can add all kinds of details to make them interesting. And unlike other crafts, this one has a lot of play value too!! Today’s diorama is just like that and we’re sure everyone’s going to enjoy making it!

1. Prepare your background for the diorama. We used a shoe box, and just took the lid off. If you would like to use a tissue box, cut out the top. This gives sufficiently dark creepiness, but if you want more light, place the box such that the open side faces you and trim a little off the top until you have the light that you seek.

3. Cut a haunted house shape out of the corrugated cardboard, and cut out windows. Stick a strip of yellow cardstock on the back to make it look like the house is lit from inside. You can also use gelatin paper to give it some glow.

4. Cut out a creepy tree and some bats from black card stock. Stick the house, bats and tree to the inside of the background with double sided tape. 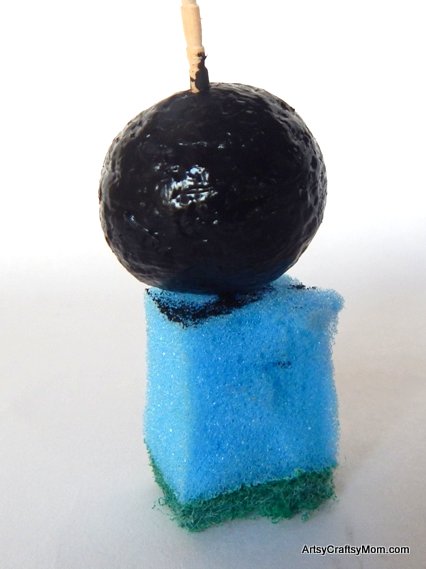 5. To make the witch, create a structure as shown in the image above – stick a toothpick through a styrofoam ball and into a piece of kitchen sponge so that it stands on its own. If you’re using transparent black fabric or plastic, paint the ball black.

6. To make the witch’s dress, cut a piece of black fabric or plastic (we cut unused trash bags) and drape it over the ball and sponge, through the toothpick. Cut off any excess fabric. Tie the dress under the ball with a piece of twine.

7. For the hat, cut a circle out of black card stock and fold it into a cone. Then cut out another circle with a hole in the centre that is just enough for the cone to pass through, but not completely, use tape to hold everything in place. Place the hat on the witch’s body. 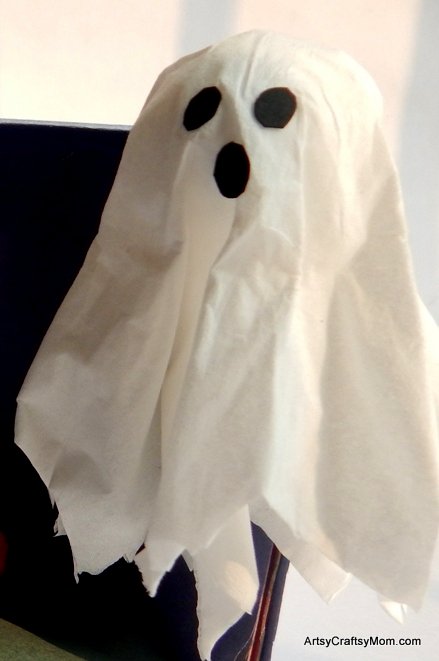 8. For the ghost, drape white fabric or strong tissue paper over a styrofoam ball and scrunch it slightly to hold its shape. Tear off a little at the edges for a ragged look. Stick on black card stock eyes and mouth. 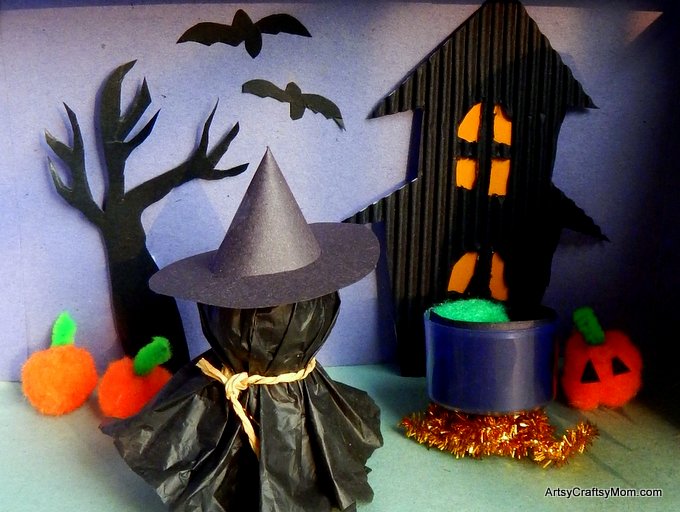 9. Make a cauldron with the lid, by either painting it black, or lining the inside with black paper. Stuff in green pom pom balls for the witch’s brew. Twist around a yellow or orange pipe cleaner for fire and use double sided tape to fix the cauldron on it. 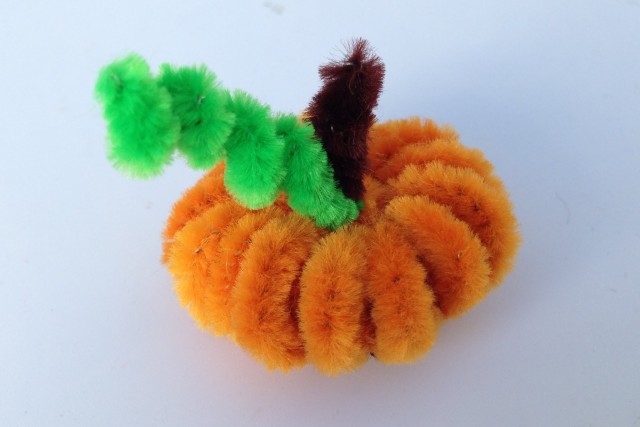 11. Now’s the time for assembly. Stick the ghost to a side of the background with double sided tape. Place the cauldron and witch in the centre. Scatter the pumpkins around and you’re done! 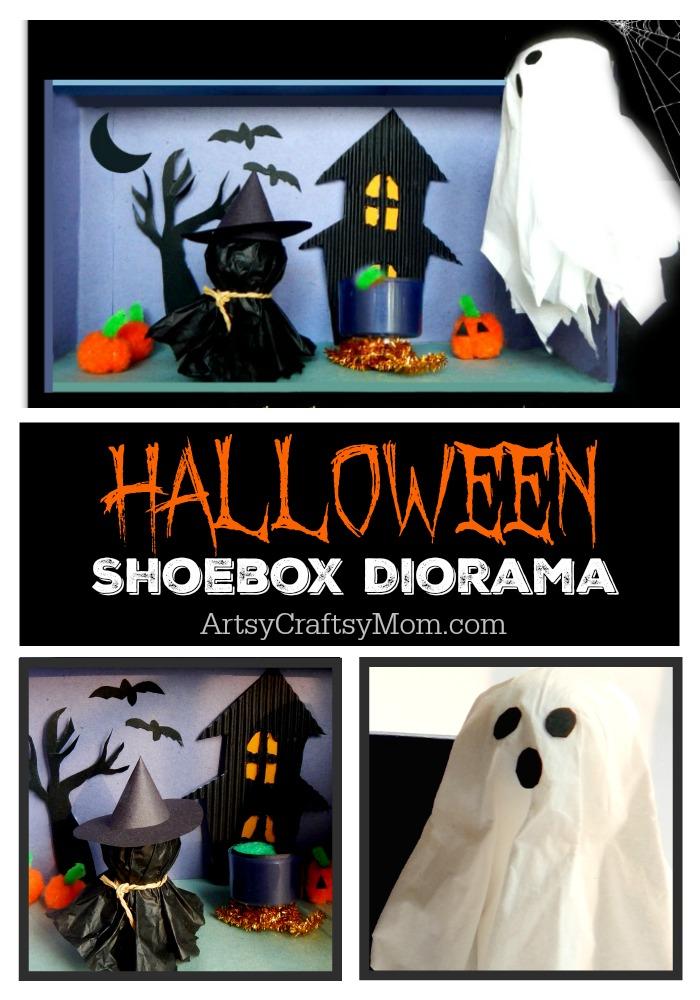 You can make any number of witches and ghosts. You can also make standing ghosts using the same technique as the witch. The fun part comes next when kids can use the diorama to spin a tale or two of their spooky adventures!

We are proud to be partnering with Creativebug for our Halloween Posts.

Sign up during the month of October to receive a Free Class and FREE 30 Day Trial with Code: HALLOWEEN