What better way to celebrate Lighthouse Day on 7th August than with some fun Lighthouse Crafts for Kids? Learn about this amazing structure as you craft along!

Whenever I hear about lighthouses, the story ‘The Fog Horn’ by Ray Bradbury comes to mind right away. The story is about two lighthouse keepers who discover a monster that lives in the depths of the sea. The monster considers the lighthouse a potential mate since the fog horn makes a sound similar to the monster’s cry. The monster comes out and makes a sad, wailing sound, waiting for the lighthouse to come towards it, which obviously never happens.

It’s a rather sad story, but lighthouses are anything but sad – they are in fact, literal beacons of hope! Over centuries, lighthouses have been guiding sailors at sea, helping them approach land safely. Just imagine the joy on the sailors’ faces when they realize that solid ground is nearby!

Today, lighthouses are becoming redundant since we have more advanced technology that does the job, without the expense of maintaining the lighthouse. Yet, lighthouses have a charm of their own, and they’re still widely used. So this Lighthouse Day on 7th August seems like a good opportunity to learn more about these amazing structures – with some cute lighthouse crafts for kids! 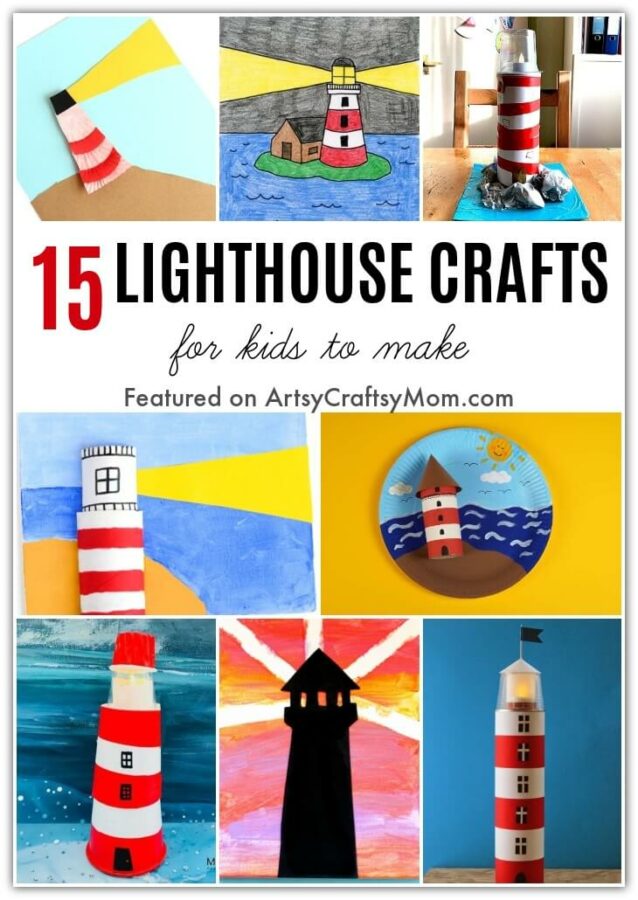 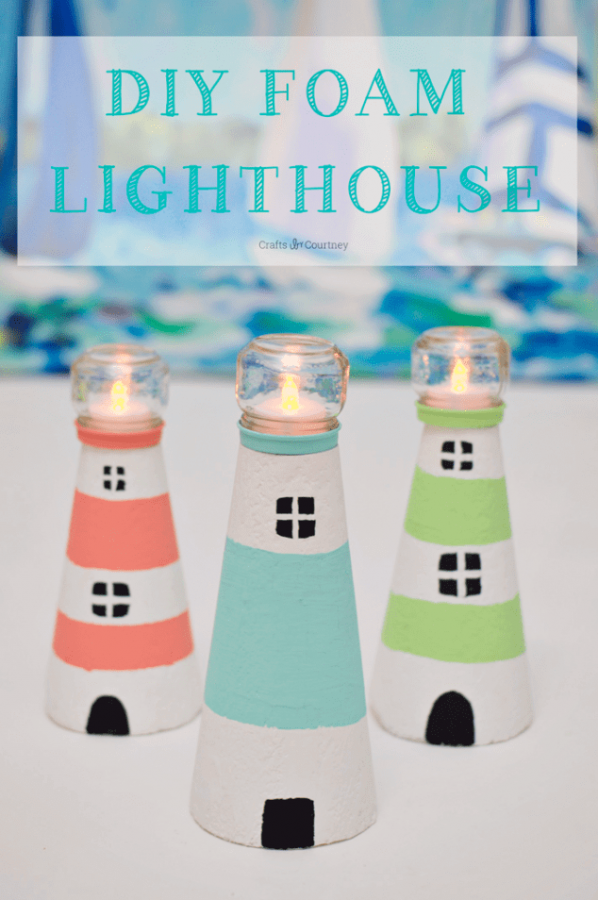 This lighthouse craft is probably one of the easiest ones you can find, and all you need are foam cones! Crafts by Courteney converts plain cones to lighthouses with a few strokes of paint and we think it’s a genius idea! 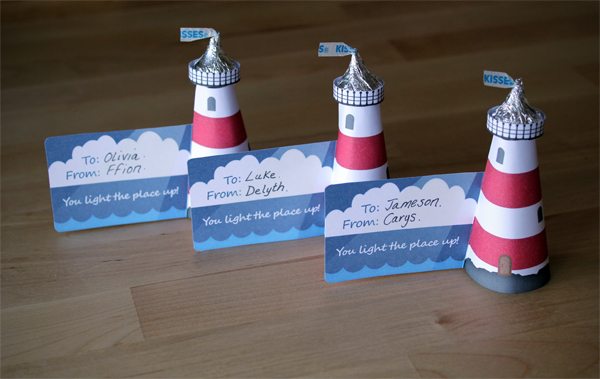 Alpha Mom has a lovely idea for lighthouse crafts for kids that incorporates a love for lighthouses with a love for chocolate! The best part is that this idea would work well for a variety of occasions – Valentine’s, Friendship Day and even to show your appreciation for your teacher. 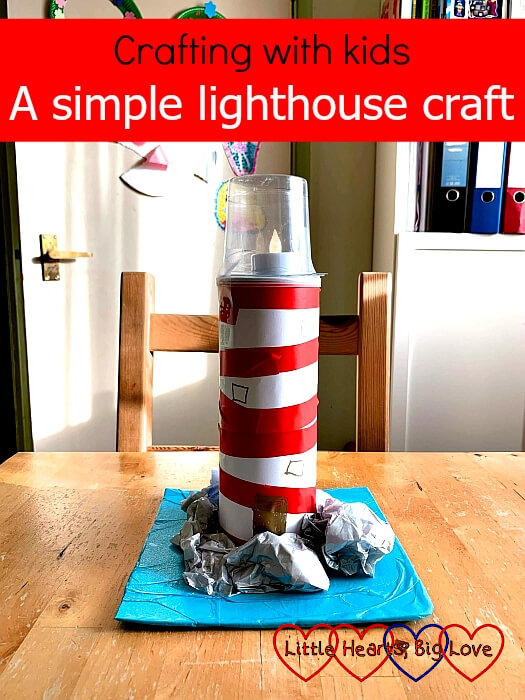 The first lighthouse is believed to have been built in Egypt, and was one of the original Seven Wonders of the World. You can recreate the magic of that first lighthouse in this craft from Little Hearts Big Love, complete with the rocks by the sea! 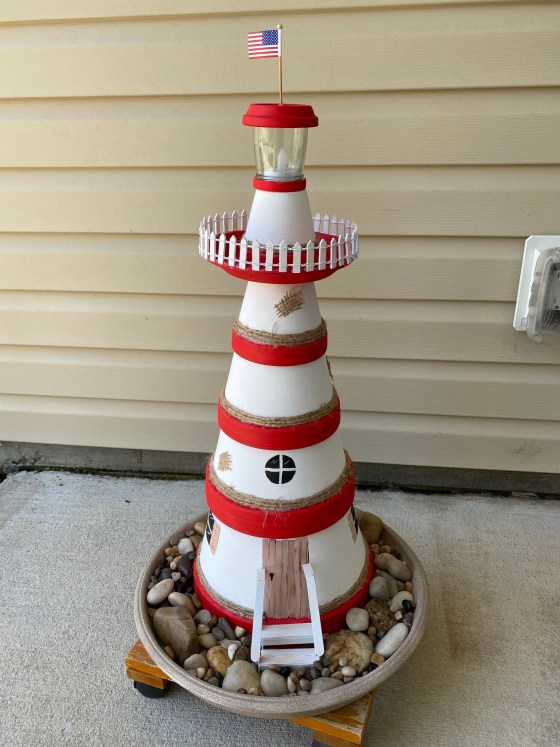 Lighthouses are often characterized by their red and white stripes, although in reality lighthouses are painted with different shapes, depending upon their location. Red and white are chosen so that they stand out against light backgrounds. You can create your own red and white light house with terracotta pots using this idea from Woli Creations. 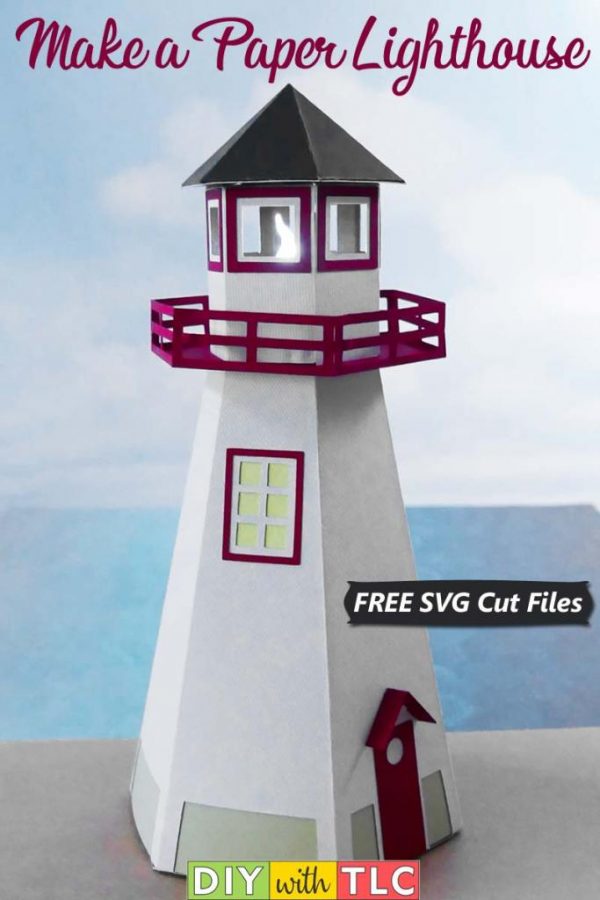 If you’re looking for simple lighthouse crafts for kids, it doesn’t get easier than this craft from Tracy Lynn Crafts! They have free files that you can download and print to create your very own paper lighthouse. It may not withstand strong winds, but it sure looks realistic!

The Pinterested Parent has a fun tape resist project for kids that features a lighthouse in the foreground. We love the use of different colors to create the effect of a sunset; it’ll encourage kids to think about all the colors in the sky when the sun sets over the horizon. 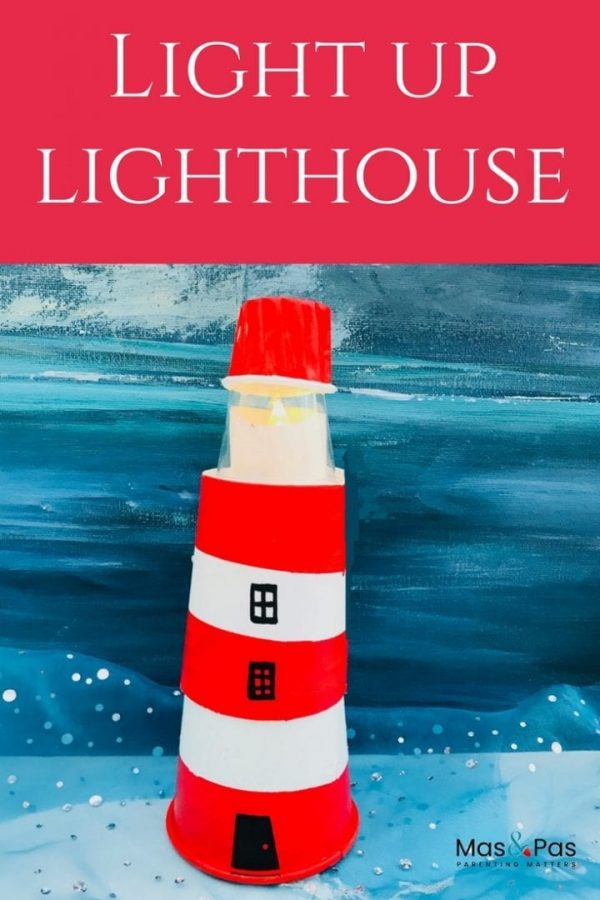 The light from lighthouses was originally from fires, and as time passed, electric lights came to be used and now they’ve transitioned to remote monitoring machines with automatic sensors. These sensors can detect if there is excess moisture in the air, so they can alert ships with fog signals. Check out this project from Mas and Pas to make your own light up lighthouse – without fire or automatic sensors! 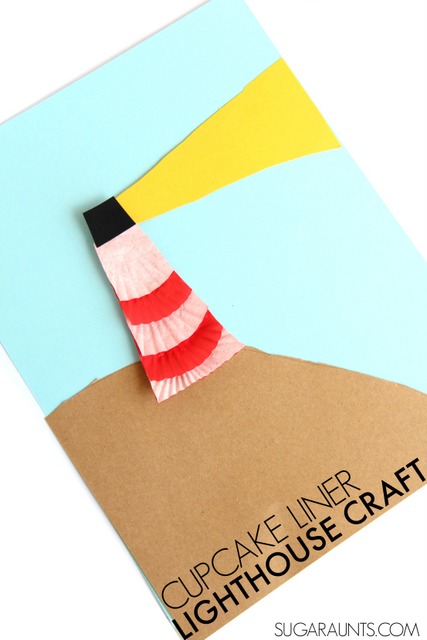 This craft from The OT Toolbox makes use of cupcake liners in such a fun way! Those cupcake liners also remind us of a dress, which can be considered an ode to the female lighthouse keepers. This is one of the first United States government jobs that women could apply to. Earlier, only wives of lighthouse keepers could get the job when their husbands died on the job. 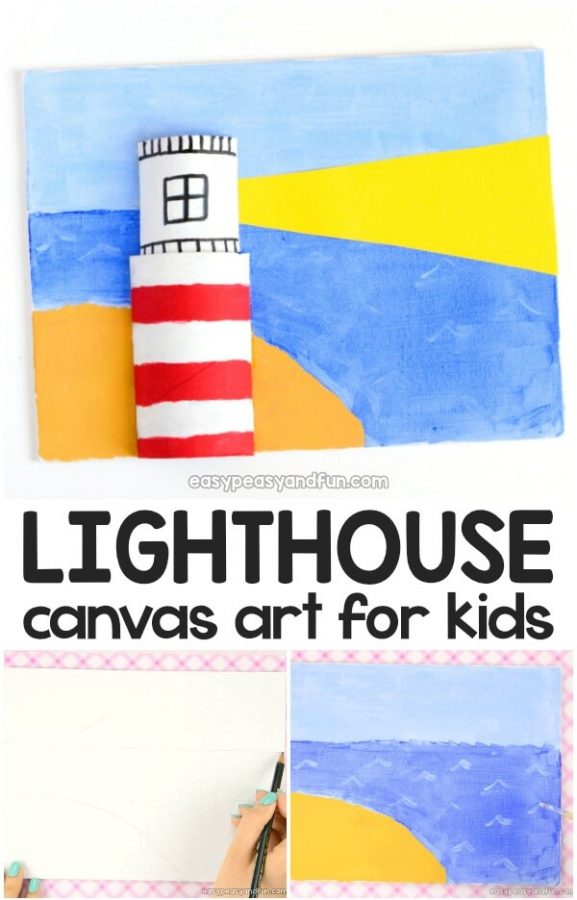 This 3-D canvas art from Easy Peasy and Fun is so cute and quite simple to make! It perfectly captures the effect of the lighthouse sending out those life-saving beacons of light onto the far seas! 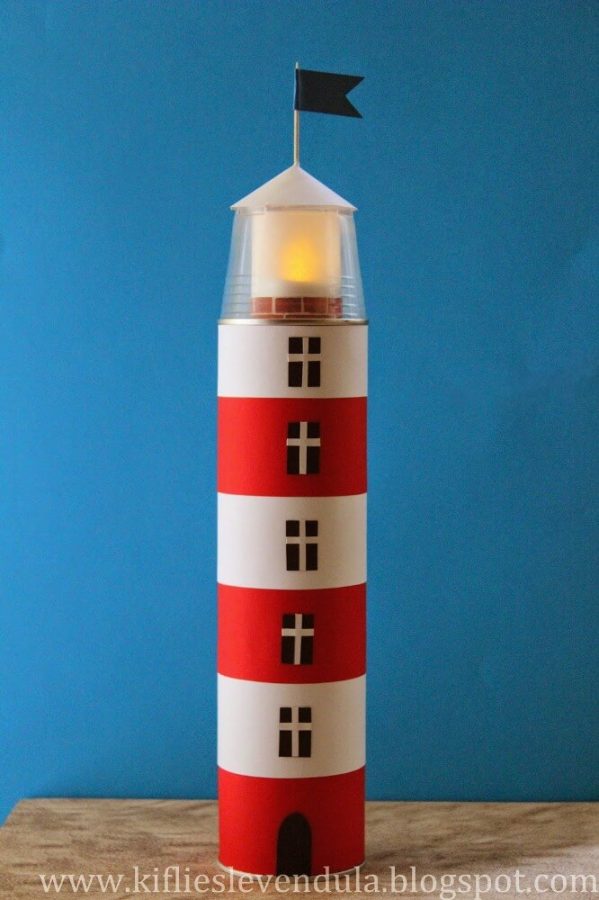 Lighthouses don’t have a specific height but are built so that they’re high enough to be visible at a distance, but not so high that sailors miss the light. The tallest lighthouse in the world is the Lighthouse of Genoa, at a height of 76 meters. Kiflies Levendula has a lighthouse that’s not that high, but is still pretty impressive all the same!

11. How to Draw a Lighthouse 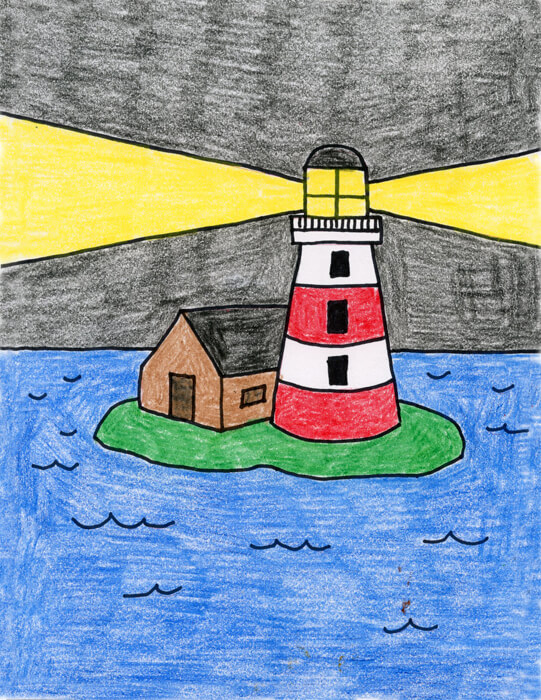 If you’ve got a drawing enthusiast at home, check out this lighthouse art work from Art Projects for Kids. It gives step by step instructions on how to draw a lighthouse and is simple enough for all ages. 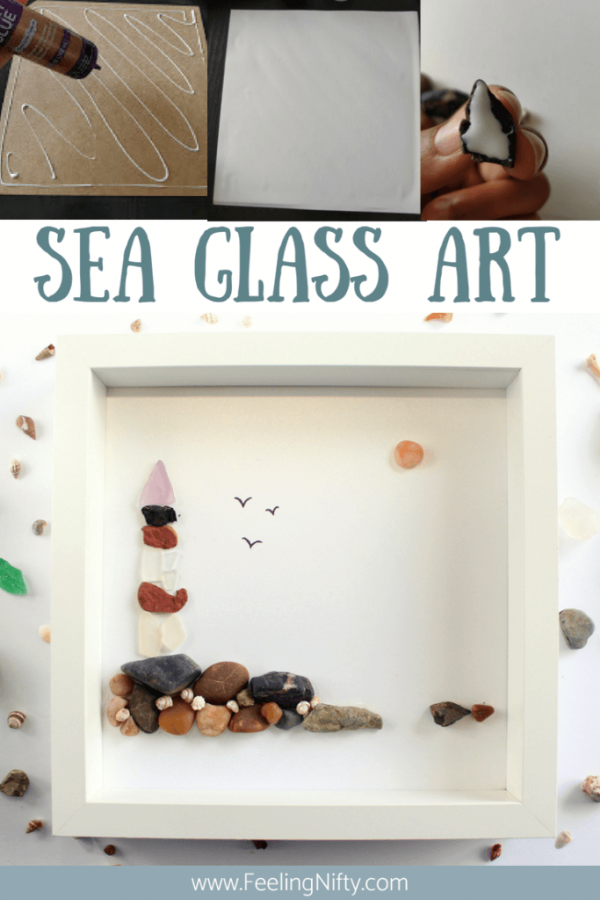 Sea glass projects are becoming quite popular these days and we’re joining in the trend with this project from Feeling Nifty. The resulting art is so beautiful, and it somehow conveys the solitary nature of a lighthouse on the rocks by the sea. 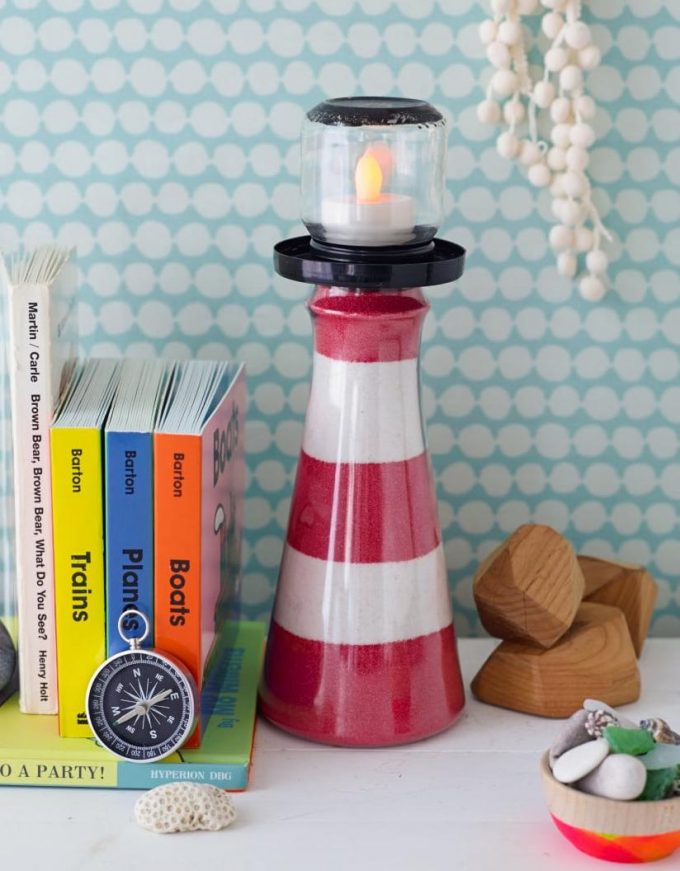 Project Kit has a fun way to upcycle things you probably already have lying around the house – by combining all of them into a lighthouse! This would make a gorgeous decor piece in your home, especially if you have a nautical/coastal theme going on. 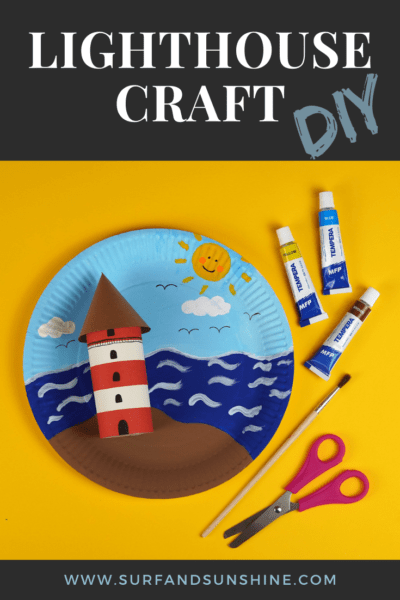 What can you do with a paper plate and a cardboard tube? Well, Surf and Sunshine has the answer – a lighthouse! This is such a bright and colorful craft that turns trash into a cute little project.

15. Lighthouse in a Bottle 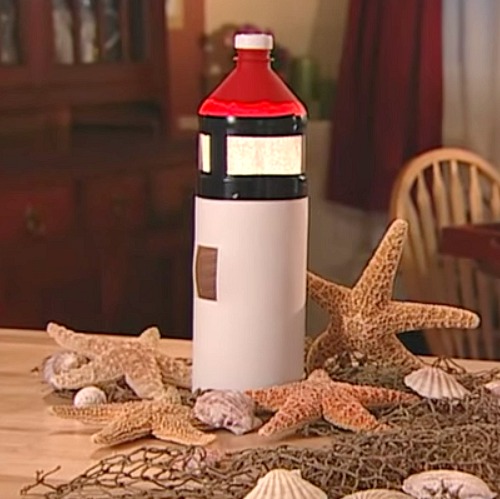 Don’t throw away that plastic bottle, which will eventually end up in a landfill or worse, the sea. Instead, do what Spoonful has done, and turn them into lighthouse crafts for kids! 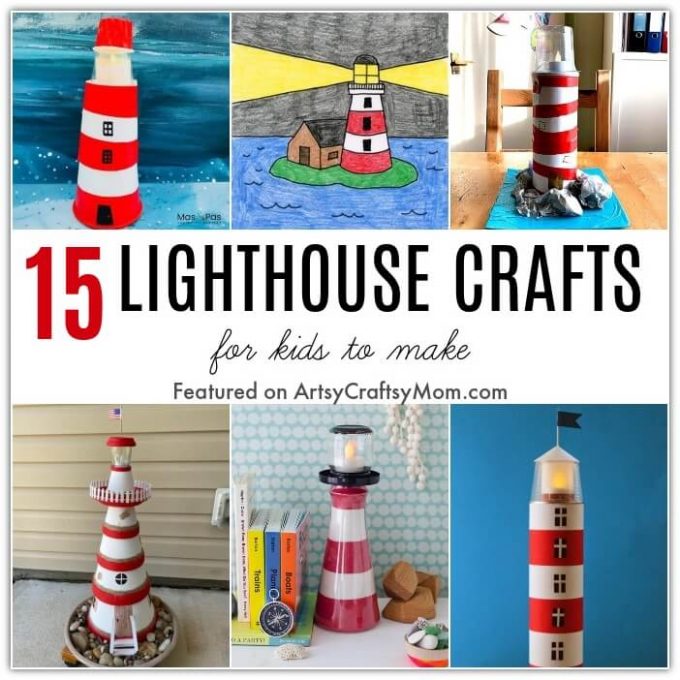 Hope you enjoyed all the tidbits about lighthouses while going through these crafts. Some of these are very easy while some require a little more effort. Pick crafts according to your child’s age and you’ll be fine. Don’t forget to check out pictures of famous lighthouses around the world too, so you can appreciate these structures in all their glory! 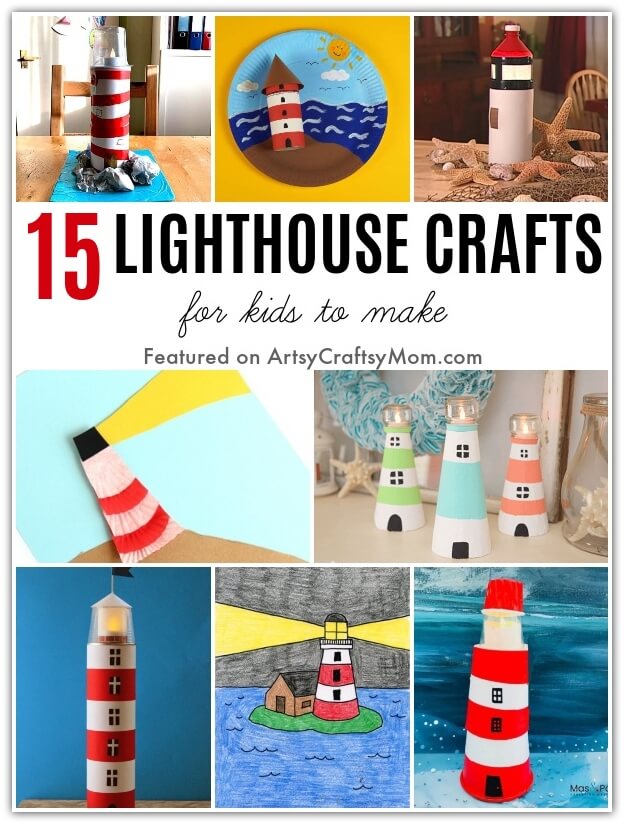 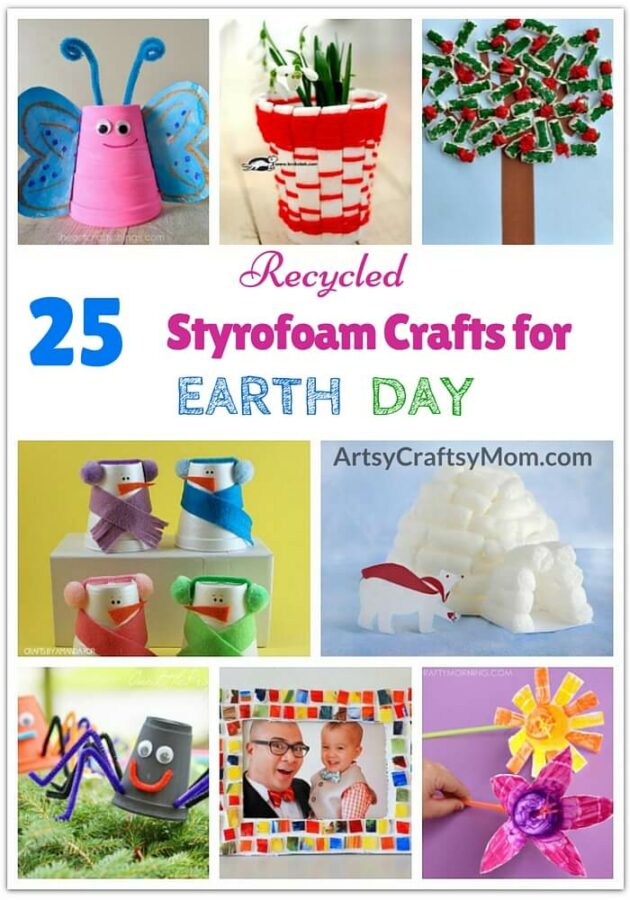 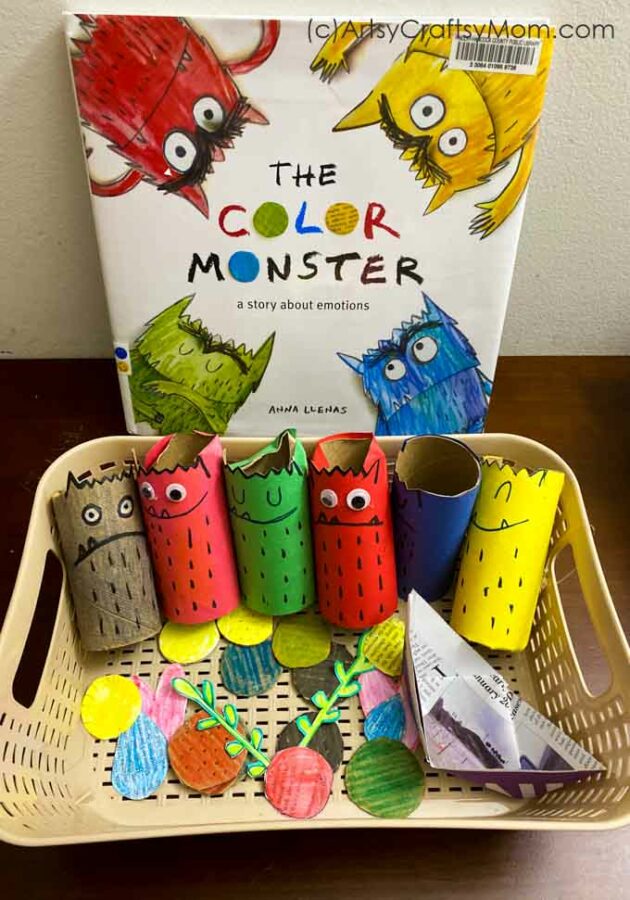 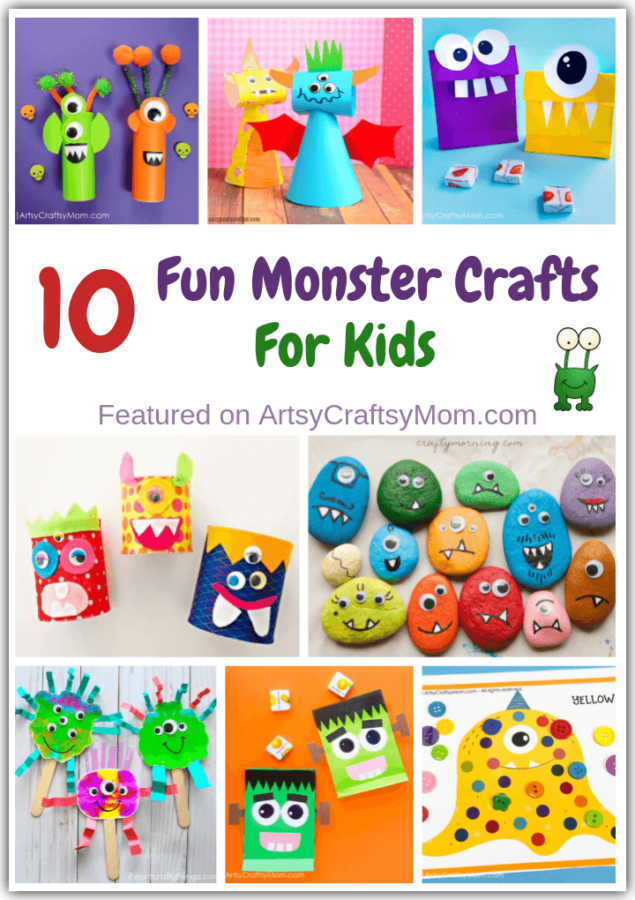 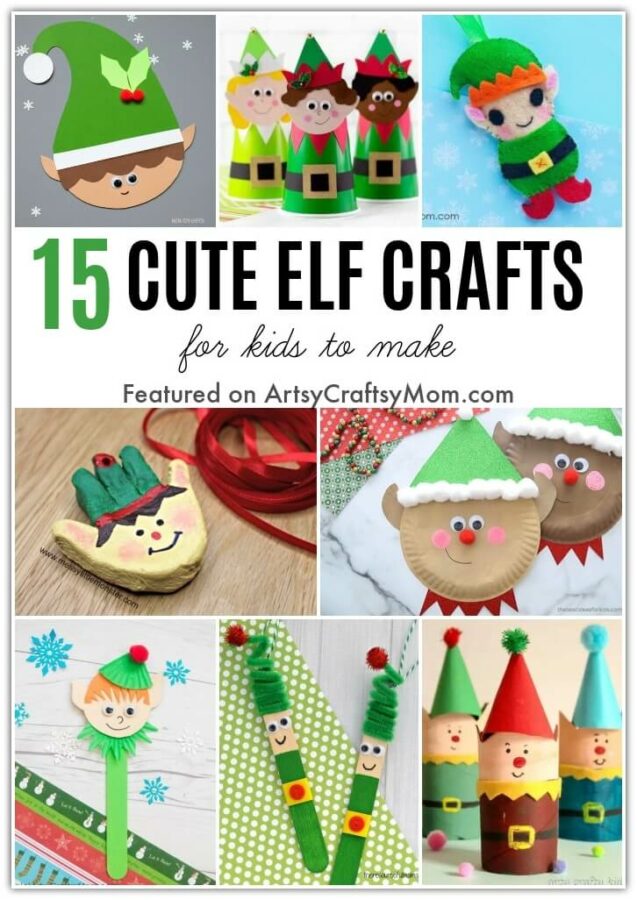