Celebrate the festival of sacrifice with some magnificent Mosque Crafts for Eid al-Adha! Turn them into greeting cards, decor or wall hangings!

It’s quite likely that you’ve heard of Ramadan and Eid together and with reason, since Eid is the festival that signals the end of the month of Ramadan. However, there’s another Eid – Eid al-Adha, also called Bakrid!

We’ve described everything about the celebration of Eid al-Adha in this post. Basically, it’s the festival of sacrifice, and also coincides with the annual Muslim pilgrimage to Mecca – the Hajj.

Since the pilgrimage and holy mosque in Mecca are important parts of this Eid, we thought it would be interesting to make some beautiful mosque crafts for Eid al-Adha. This is a great opportunity not just to celebrate the festival, but to also learn about some historical mosques around the world! 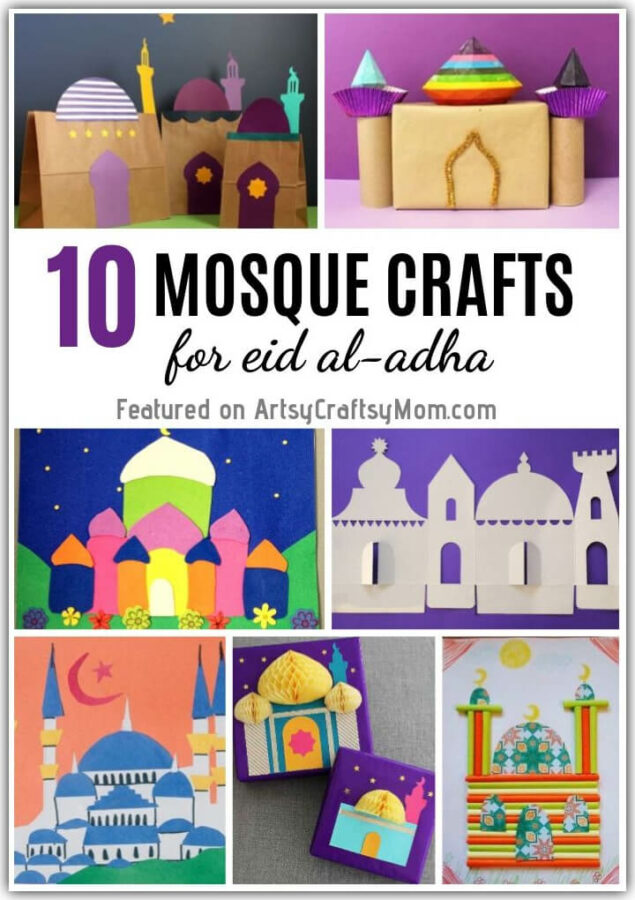 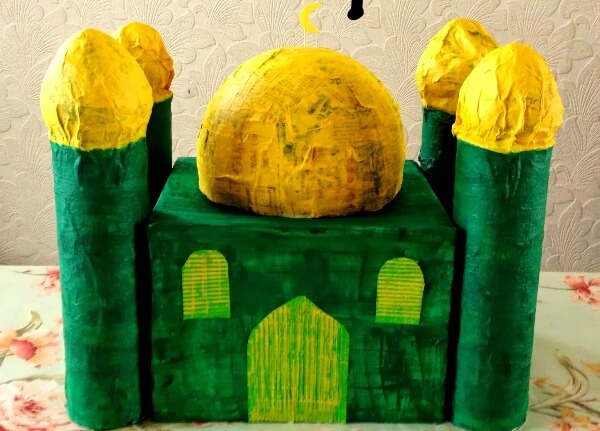 Paper Mache is super fun to craft with, and you can make all kinds of crafts with it. Karima’s Crafts has gone ahead and made a big gorgeous mosque that looks quite solid! Paint it in shiny metallic colors and you have an awesome architectural wonder on your table!

Take it a step further and paint the phases of the moon outside, like it’s done for the immense Sheikh Zayed mosque of Abu Dhabi – it’s supposed to have the world’s largest carpet! 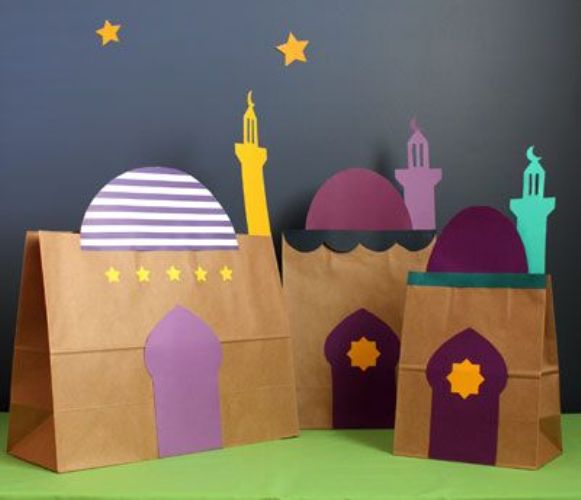 Hello Holy Days solves your Eid table decor problem with these absolutely cute paper bag mosques that can also double up as treat bags for kids! You can customize the details to your liking with different colors and shapes.

Go with a shiny golden dome if you’d like to recreate the Dome of the Rock mosque in Jerusalem, which covers a rock that’s important to both Islamic and Jewish faiths. 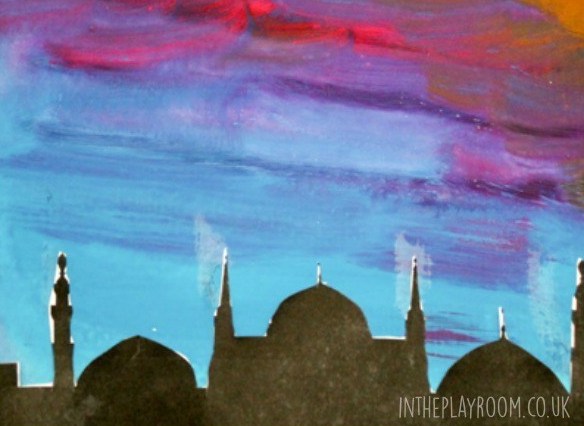 Doesn’t this silhouette art by In the Playroom look gorgeous? I love how you can change that sky view to a night view or an early morning one, using more oranges, reds and yellows. In any case, it’ll look beautiful!

See if you can add a water element to make it look like the mosque is floating – like the Puchong Perdana Mosque in Malaysia! 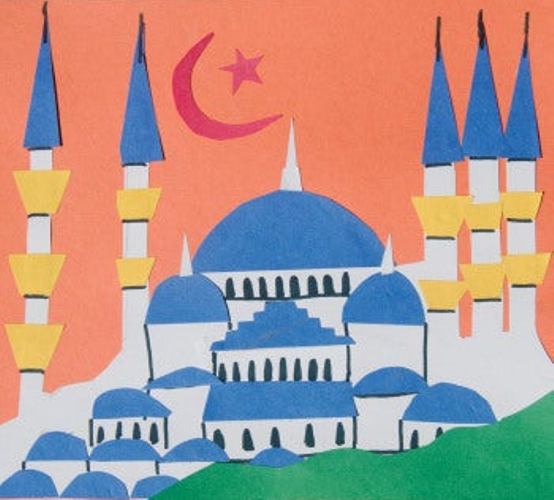 The Blue Mosque of Turkey is probably one of the most well known mosques in the world, thanks to it’s characteristic blue tile interior! Education features an easy craft that goes with blue domes instead, since it’s easier to depict the exterior. 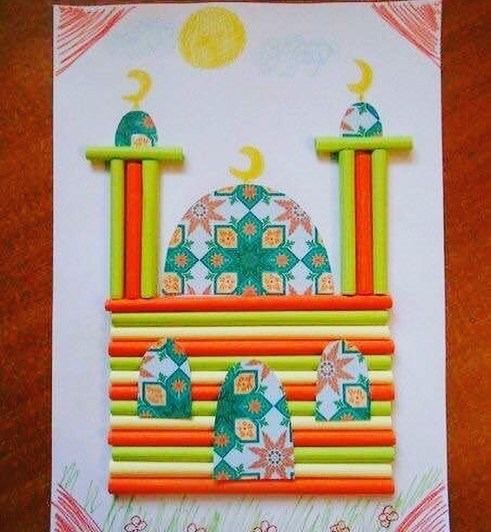 Kiddiegram has an easy and cute project for little kids that makes use of old drinking straws. It’s clever how they replicate intricate work seen in most mosques by using patterned paper. Go with Moroccan prints to give it a more mosque-like feel.

Check out the designs on the Wazir Khan Mosque of Pakistan, built by the Mughal emperor Shah Jahan and considered to be the most elaborately decorated Mughal mosque. 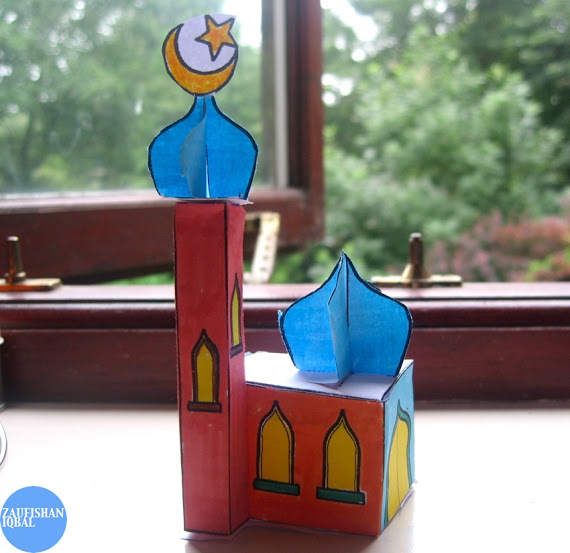 Zaufishan has a very simple mosque craft made out of geometric shapes, and we love how she’s done the domes and minaret! Tip – cut out the windows and use transparent colored sheets for the windows and place the mosque near the window – wow!

You’ll find that this craft resembles the Hassan II Mosque of Casablanca, with a 700 feet tall minaret topped with a laser that points towards Mecca, making it one of the tallest religious structures in the world. 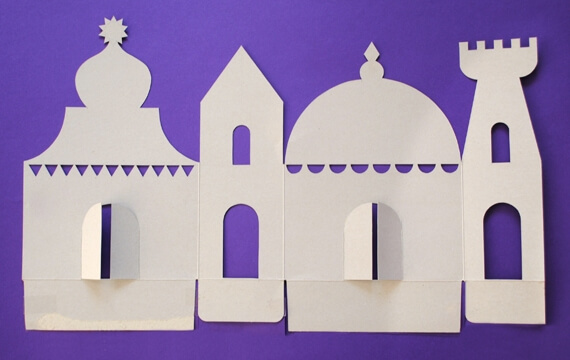 There are a zillion things you can do with cereal boxes, and Minie Co shows us how to turn it into a mosque! We love how simple and elegant it looks – no one will guess it’s actually a cereal box on the back!

Paint the arches in stripes of red to resemble the historical Cordoba mosque of Spain. It was first a church, turned into a mosque, and then divided into a church half and a mosque half and then finally converted into a church. So much history in one building! 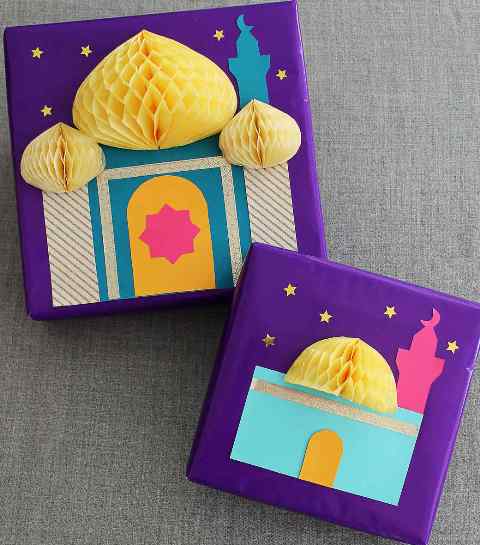 Why give drably wrapped gifts for Eid when Martha Stewart is showing us how to make them pretty? Dress up your gifts with these honeycomb mosque domes. You could also turn them into wall hangings too!

Aren’t those honeycomb domes pretty? They’re similar to the Crystal mosque of Malaysia, made of crystal, glass and steel. It’s a small mosque but a gorgeous looking one! 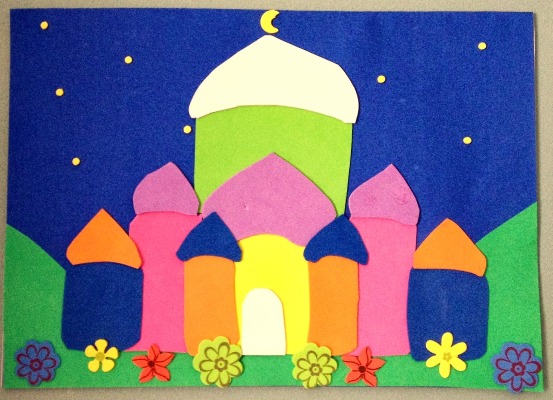 Karima’s Crafts gives us another craft that’s perfect for little ones to practice their collage skills! Just cut out squares and rectangles as well as dome shapes and let the kids put it all together for a one of a kind colorful mosque!

If you think this resembles the St Basil’s Cathedral in Moscow, you’re not wrong – in fact, it is similar to the Qolsarif Mosque of Russia, which also functions as a museum. 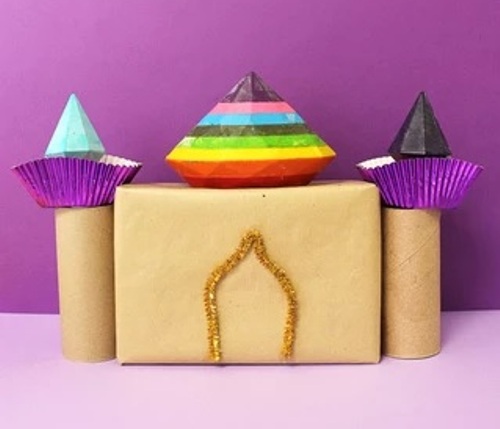 Kid Made Modern makes good use of triangular crayons and cupcake liners to create this unique 3D mosque! The golden pipe cleaner in front adds a nice touch, and the shiny metallic liners go with the theme.

This isn’t the only unique architecture you’ll see in mosques – the Great Mosque of Xi’an in China is completely built according to Chinese architecture – you wouldn’t guess it was a mosque! 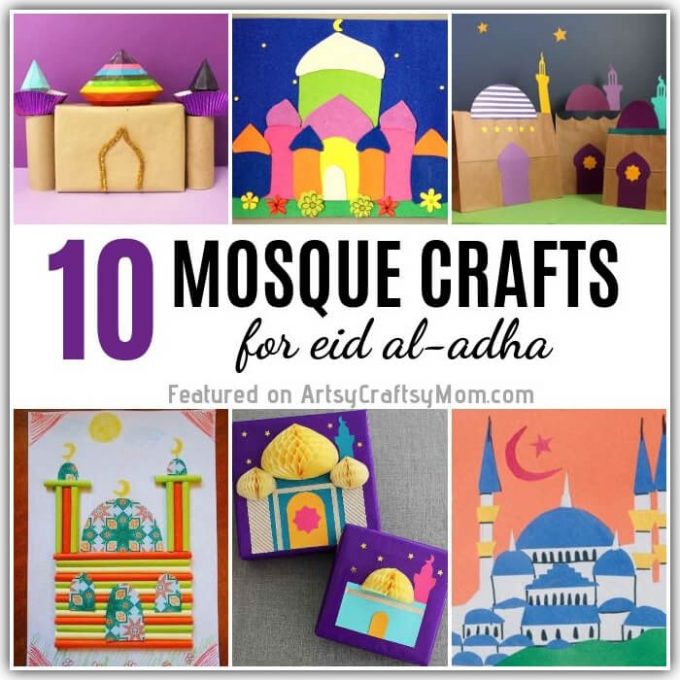 Isn’t it fun to learn about history and other cultures by doing crafts? While you’re busy with these mosque crafts for Eid, don’t forget to check out our ideas for DIY Eid gifts and cards. Let’s make this a memorable festival! 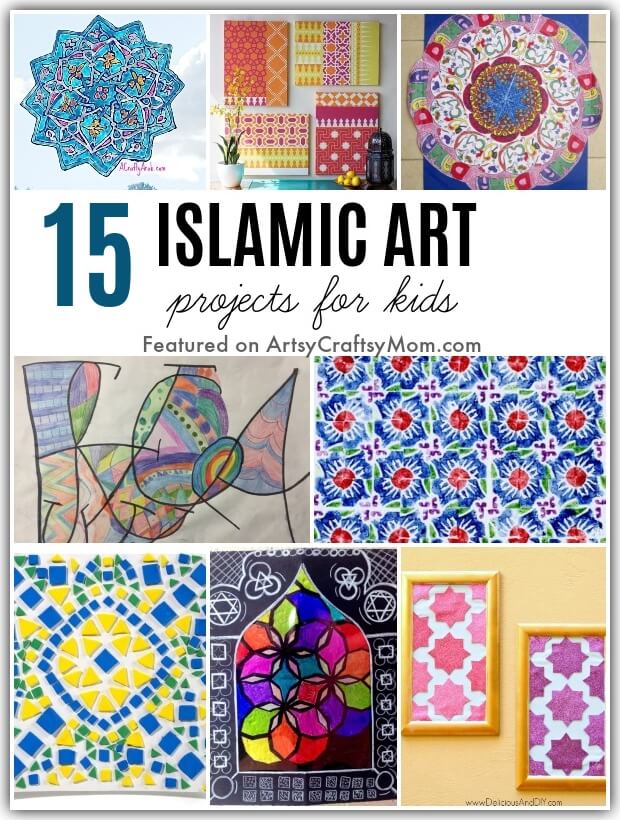 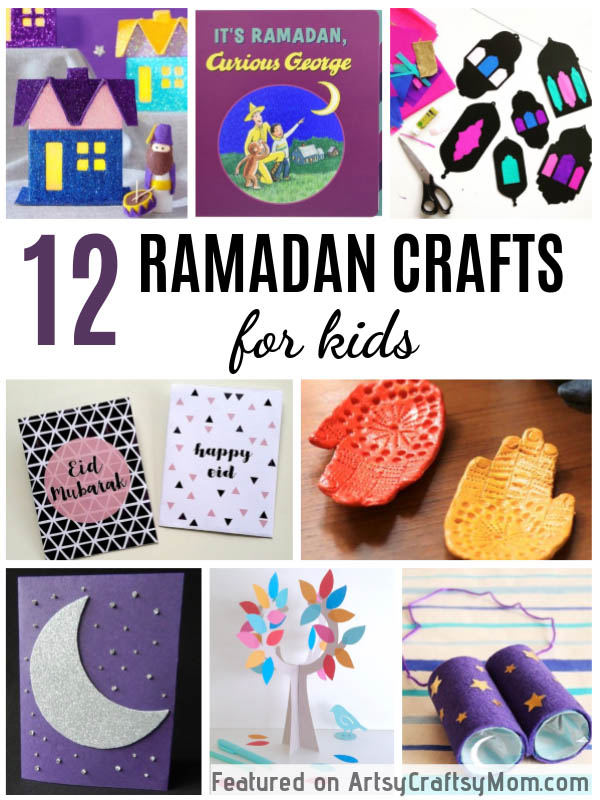 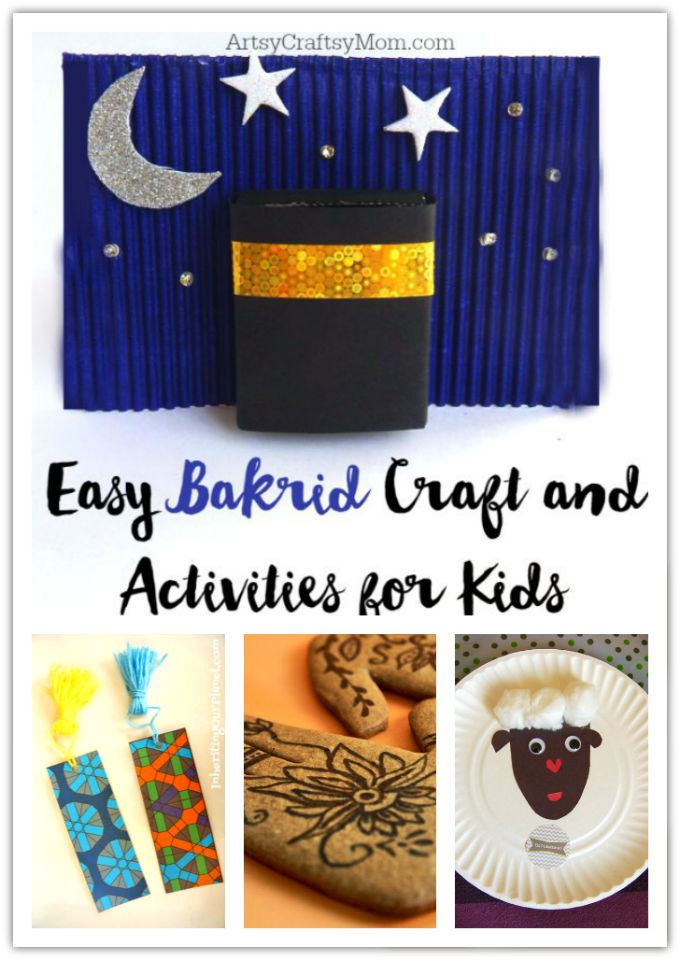 10 DIY Eid Gifts and Cards for Kids to Make 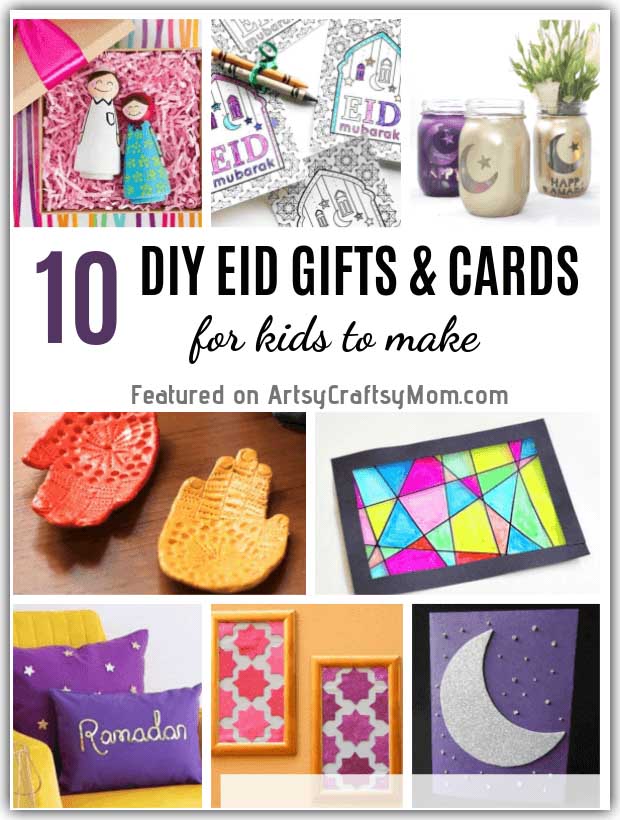 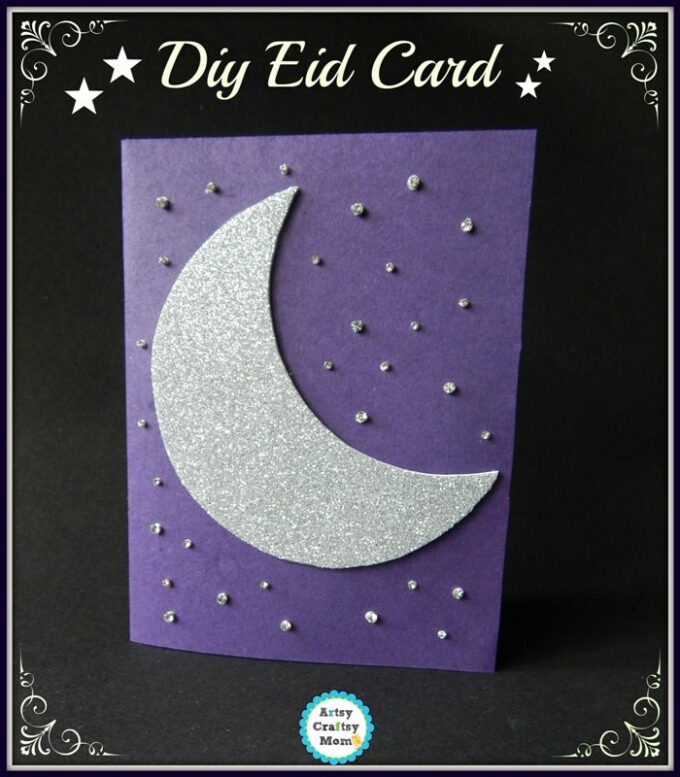 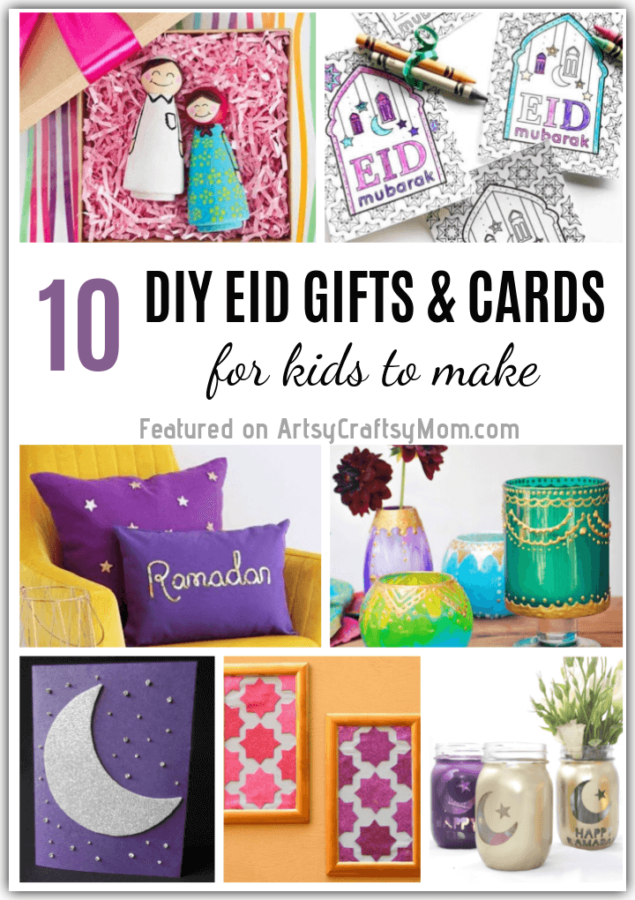 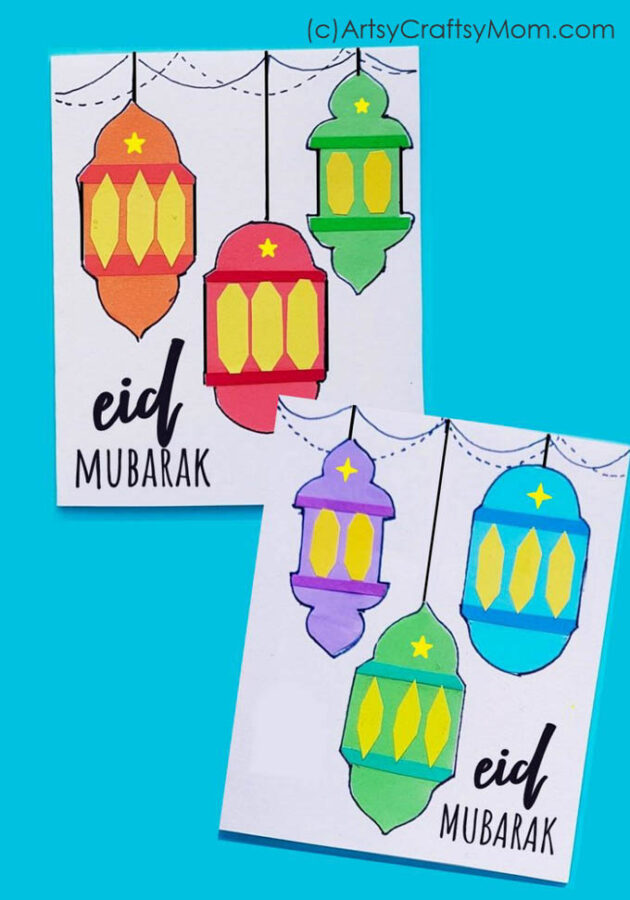 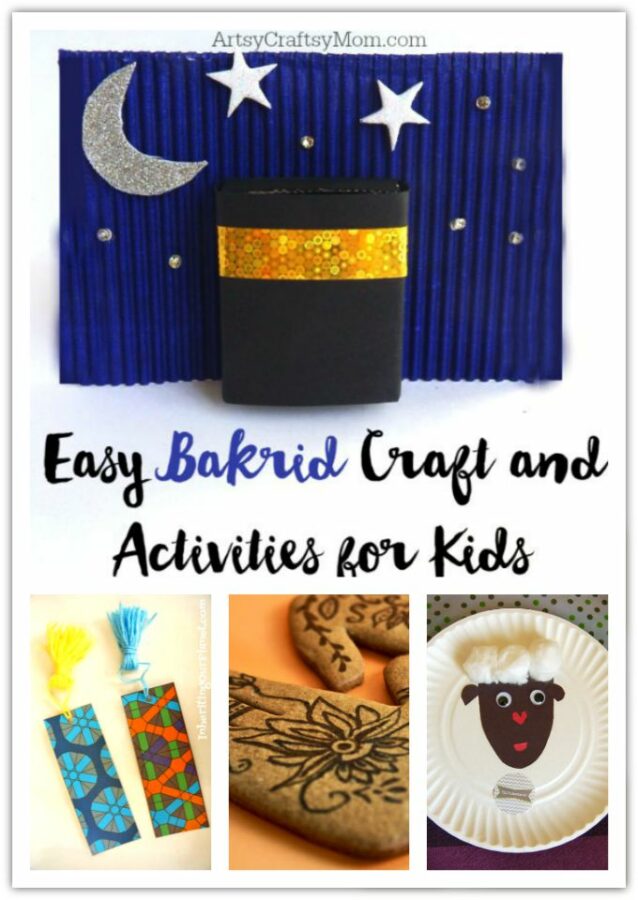