Lil P’s school held an inter school competition in their campus recently. There were 2 categories for which Lil P decided she wanted to participate.. The first one was “Clay Play” for Std I &II combined – The kids had to carry all materials (Natural Clay / Play dough / Homemade dough) to school and create something on the Theme – Festivals of India. From day 1 Lil P wanted to represent Ganesh Chaturti using clay, Ganesha being her ever favorite God.
I needed ideas that a 6 year old could do independently, within an hour. I even asked a few FB groups for much needed advice. There were many fab ideas but Lil P rejected them all. Ganesh Chaturti it would be!
I have always used natural clay / air dry clay at home. My mom was visiting and she helped out too. On 22nd evening, We started with a printout of Ganesha on an A4 sheet and I asked Lil p to fill it up with coloured clay. We used oil based plasticine that was available at a local book store. Lil p was able to do it on her own but it took her over an hour to complete it. Plus the plasticine was staining her fingers so we felt this would not work. 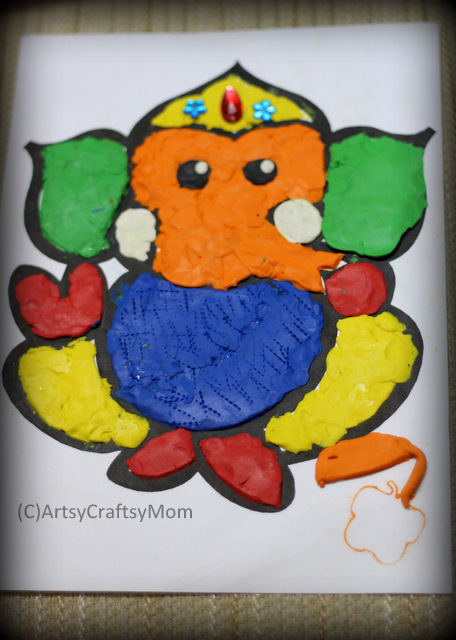 Then we tried again on 24th night, this time using natural clay. We showed lil P how to make her own miniature Ganesha and how to make plates, laddoos, jilebi etc.. Lil P loved making round round jilebis. But this looked very plain and by then hubby dearest had found some Play doh in a shop near his office. The whole of HSR is filled with China made clay.. No play doh anywhere.. 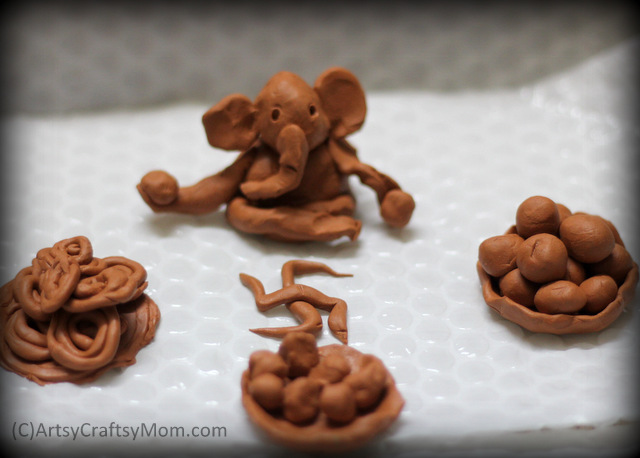 25th morning was the competition… We just explained that she now had to combine the 2 things she had learnt the earlier days and make one using play doh. Mom also had an idea to mount the Ganesha printout on a picture frame instead of keeping it horizontal. This time I printed a smaller ganesha for her to fill in. Here’s what she finally made at her school on her own.. 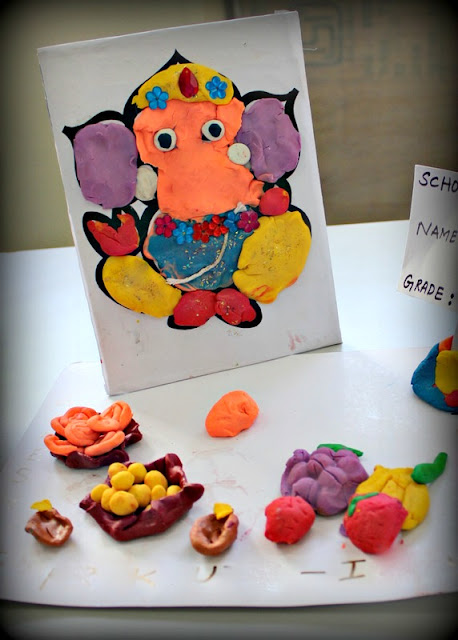 She won the 2nd Prize for this too 🙂 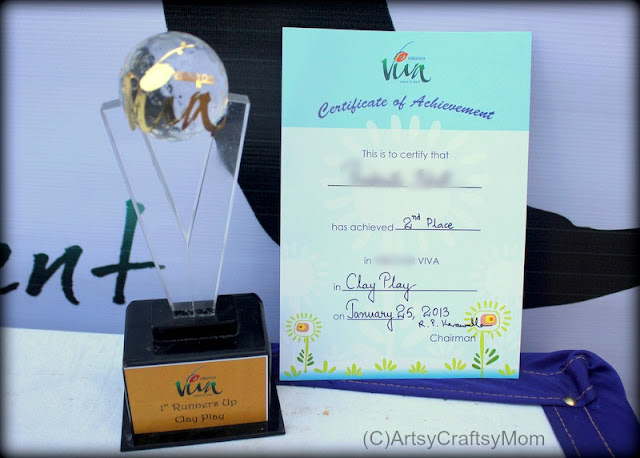 Isn’t that awesome!! Her first trophy ever!
Unfortunately, right after the competition, Lil p fell sick so we had already reached home when the results were announced and missed the prize distribution too. Lil P’s best friend’s mom called us to congratulate. I went back to school, to click a few pics. Lil P will get her trophy in class on 31st.  Lil p is still very sick with high fever. I’m hoping its just viral.
I’ll do a separate post on what the other kids made. Stay tuned for some awesome ideas..