Frida Kahlo faced a lot of pain in her life, but she turned it all into art. Teach children about this incredible artist and personality with these 10 fantastic Frida Kahlo Art Projects for Kids.

“I never paint dreams or nightmares. I paint my own reality.” – Frida Kahlo

We often hear about artists’ deriving inspiration from pain, but Mexican painter Frida Kahlo’s art isn’t just derived from pain, it is pain. That’s how powerful her work is, and you can’t help but be touched somewhere deep every time you look at a painting by this talented artist.

Frida Kahlo was born in Mexico and was Mexican to the core, as can be seen by her art. She focused on traditional Mexican motifs and was a strong believer in promoting indigenous Mexican culture, which was under threat from colonialism. She even took to wearing Mexican peasant dresses and doing up her hair differently, a look that has now become iconic.

Frida suffered all kinds of agony throughout her life, both physical and emotional. From contracting polio as a child, to enduring a broken spine and pelvis in an accident to a leg amputation, Frida spent her entire life in pain. Her relationships were also volatile, and she always yearned to connect with others, but eventually ended up choosing herself as her best friend.

Kahlo’s work can’t be limited to any particular style, although some call it ‘magical realism’ or surrealism, although she denied her work was surrealist. Her pain comes through very strongly in her art, in the graphic details, the jagged edges and colors. But she never shied away from painting the truth, and her paintings are often a reflection of the experiences of many women around the world. It is probably due to this and due to her strong sense of individuality, that Frida is regarded as a feminist icon today.

All this makes Frida Kahlo a personality that can’t be ignored! To introduce kids to this beautiful, independent and extremely talented artist, here are 10 fantastic Frida Kahlo art projects for kids to make. 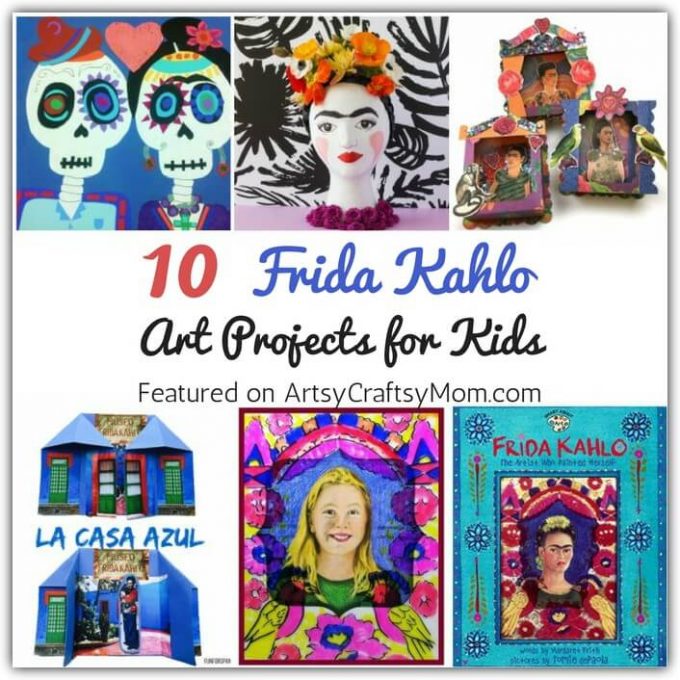 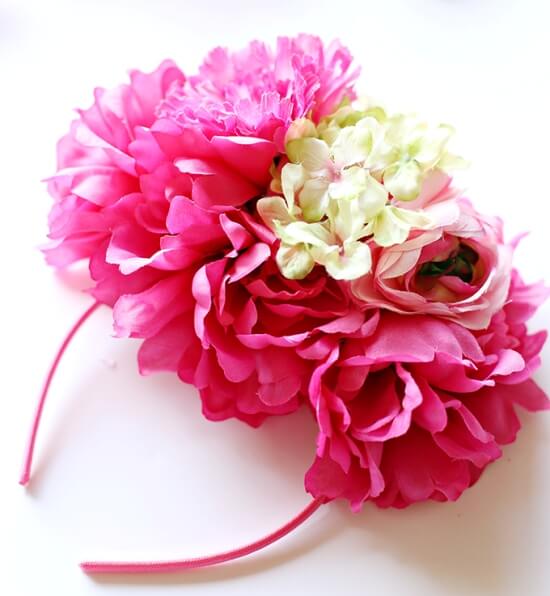 One of the most identifying features of Frida Kahlo’s appearance was the flowers she used in her hair, piled high. Her love for flowers is evident when she said, “I paint flowers so they will not die.” If you’re trying to make a Frida Kahlo costume or just want to channel her love for flowers, try out this beautiful flower headband craft from See Vanessa Craft. 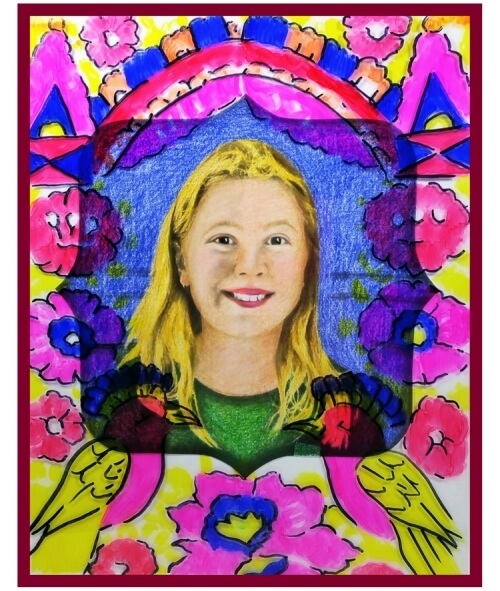 Kahlo painted several self portraits, and she also included herself in many of her other paintings. One of the most popular self portraits is ‘The Frame’, which features Frida on a blue background amidst a colorful frame. This is the first work by a Mexican artist to be bought by the Louvre in France. Woojr has a fun project to create a similar self-portrait – frame and all! 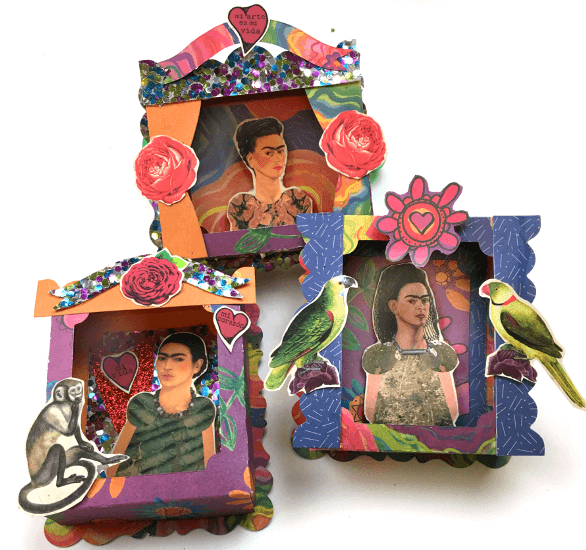 Frida Kahlo never had children; she couldn’t carry her pregnancies to term because of her ill health. But she did have several pets, including monkeys, dogs and birds. This shadow box project by Crafty Chica displays the artist surrounded by her favorite things – her pets and flowers! This is a detailed project that’s better suited for older kids who can take it up as a weekend project. 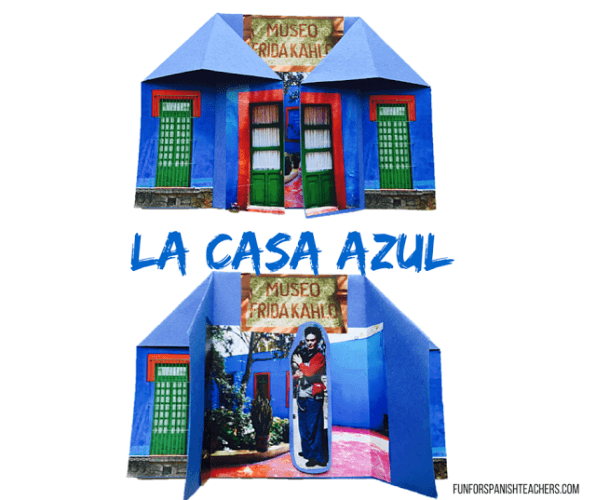 La Casa Azul (The Blue House) is the house where Frida Kahlo grew up, lived with her husband and eventually died in. The house was later turned into a museum called Museo Frida Kahlo and is one of the most popular spots in Mexico City. Fun for Spanish Teachers has a pretty paper craft based on Kahlo’s beloved home which has some interesting features like the front door opening up to reveal Frida herself standing to welcome you! 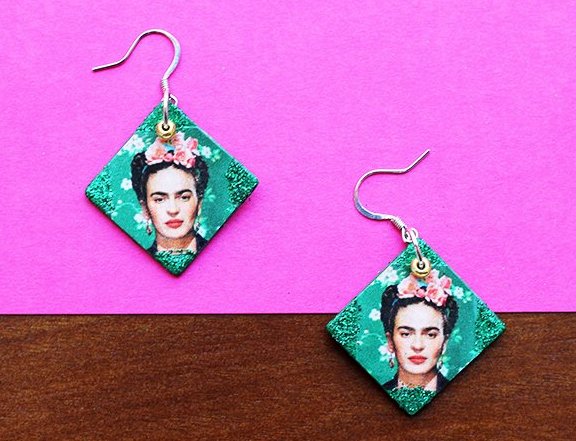 Today, Frida is considered a feminist icon, and a role model for adolescent girls. Probably because they’ll be able to relate to the rebelliousness she felt through her own teen years! Mexican society, like many others in those days, was hugely patriarchal, with a priority on male machismo. Frida detested this concept. Her individuality and refusal to conform to social norms just because of being a woman make her one sassy woman! Mom.Me has the perfect project for pre-teens and teenagers so they can hear Frida’s words in their ears all the time. 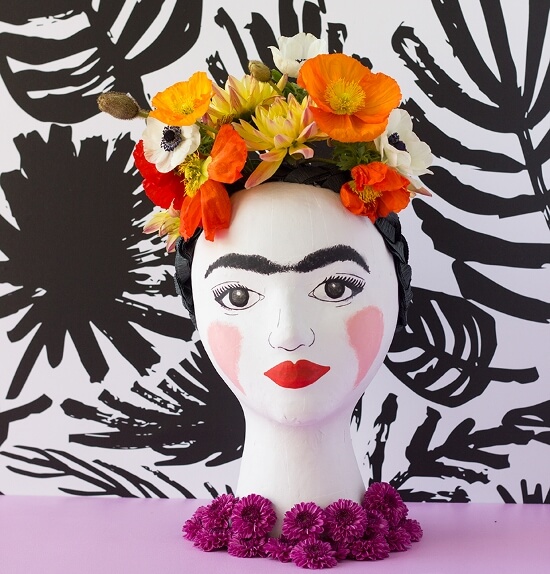 Frida’s personal style was very distinct and powerful and she actually used her appearance to make a statement. She was also proud of the way she was – unibrow, moustache and all. She painted herself with brutal honesty, and never hid the unique details that made her who she was. This Frida Kahlo head vase from The House that Lars Built is a lovely project that celebrates all these little things about Frida that made her special.

7. Frida Kahlo: The Artist who Painted Herself 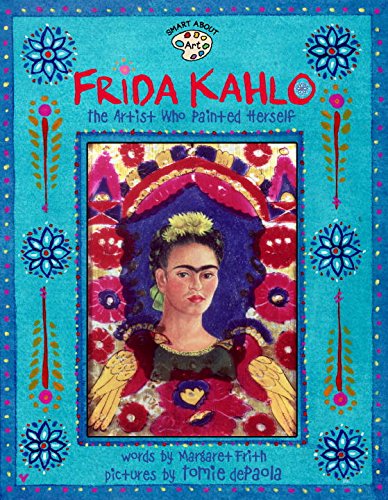 Frida Kahlo was a complex personality who went through a lot in her life. It can be difficult for kids to understand this, but this book does so beautifully. It doesn’t skimp over the details of Kahlo’s life, but goes on to show how she derived strength from the events in her life and how it affected her art. The book also describes the techniques she used and about her famous works. A great read for middle schoolers and older. 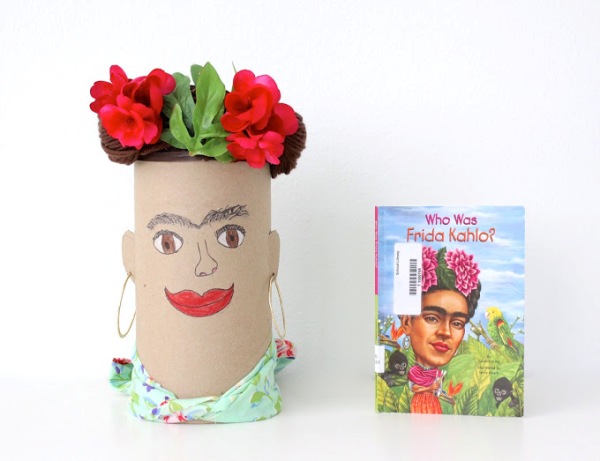 We love this little project from Made Everyday, to go with the book ‘Who was Frida Kahlo?’ Once the kids learn about this incredible artist, let them create little crafts based on whatever touched them the most about her story. It could be flowers, a self portrait, a blue house – anything! Let them put it all in a little can or cardboard tube decorated as, who else – Frida Kahlo! 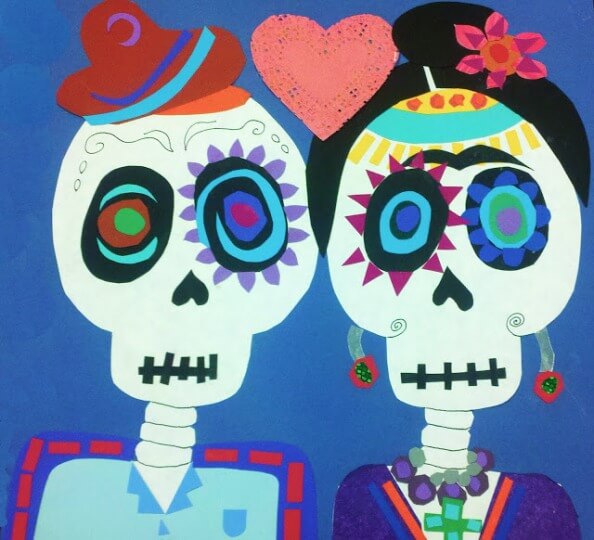 Frida spent many years of her life married to the famous painter and much older Diego Rivera, another icon of Mexican art. While their relationship was often turbulent, they still worked together to support the Mexican revolution. The painting ‘Frida and Diego Rivera’ was made shortly after their wedding and echoes what the world saw – a physically mismatched couple, the famous painter husband and his delicate, pretty wife. Modern Art 4 Kids gives this painting a skeletal edge with a colorful paper collage. 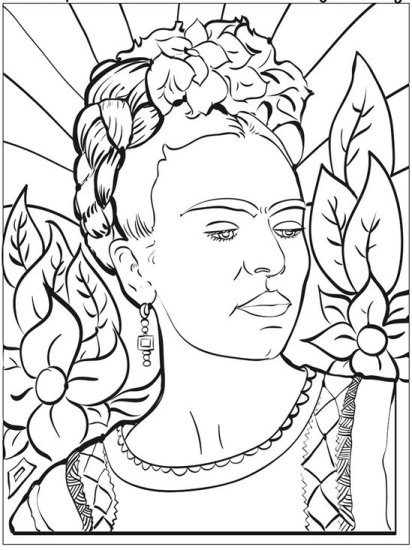 For kids who are just beginning to learn about the artist and who would rather do something simple, it’s a good idea to start with a coloring page. Mom.Me has a free printable Frida Kahlo coloring page featuring her self portrait, which gives kids plenty of scope to add lots of color. Show them several of Kahlo’s self portraits before they begin, so they get an idea of the colors and shades to use.

The challenges that Frida faced throughout her life were enough to bring down any strong man – but not Frida! Whenever she had to face a difficulty, she turned it into art, which is why her work is so strongly autobiographical. She feared no one and would submit to none; she was her own master. We hope that these Frida Kahlo art projects for kids show them why she is an icon and inspiration for women across the world and across ages.