These Katsushika Hokusai Art Projects for Kids are perfect to help us learn about the amazing Japanese artist who made great waves a thing!

“If only Heaven will give me just another ten years… Just another five more years, then I could become a real painter.” ~ Katsushika Hokusai

It’s not uncommon for artists to be inexplicably drawn towards a certain thing, like Laurel Burch was with cats, Wayne Thiebaud was with desserts and Georgia o’Keeffe was with flowers. But when was the last time you heard of an artist being so obsessed with a specific landmark that he painted over 36 views of it? 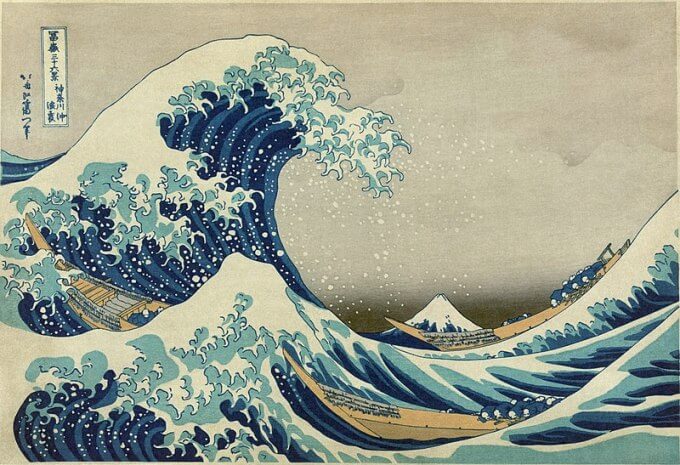 Yes, such a man did exist, and what you see above is one of those many views – of the iconic Mount Fuji in Japan! The artist in question is none other than Katsushika Hokusai

Who is Katsushika Hokusai?

Katsushika Hokusai is a well-known Japanese painter and printmaker who specialized in the ukioy-e  (“pictures of the floating world”) form of art. Katsushika Hokusai was born in October 1760 in Edo (now Tokyo), Japan. Hokusai marked the peak in the history of the Japanese landscape print. He produced about 35,000 drawings and prints throughout his 70 years of artistic creation.

What picture is Hokusai most famous for?

The picture above is ‘The Great Wave“, which is one part of Hokusai’s famous series of paintings, titled ‘Thirty-six Views of Mount Fuji’, in which he’s captured the mountain from various angles, at different times of the day and year. Hokusai began painting at quite a young age, inspired by his father who did designs for mirrors. He apprenticed with a wood carver later, and soon became a student of famous ukiyo-e artist, Katsukawa Shunshō.

What is Hokusai style of art?

Ukiyo-e is a style of printing with wood blocks, something that Hokusai excelled at. He was an artist who only got better with age, and wished he could live longer just to improve his art!

As we approach his birthday month, we have gathered some beautiful Katushika Hokusai art projects for kids to learn from, and to realize that no matter how much you seem to understand something, there’ll always be another view to see it from! 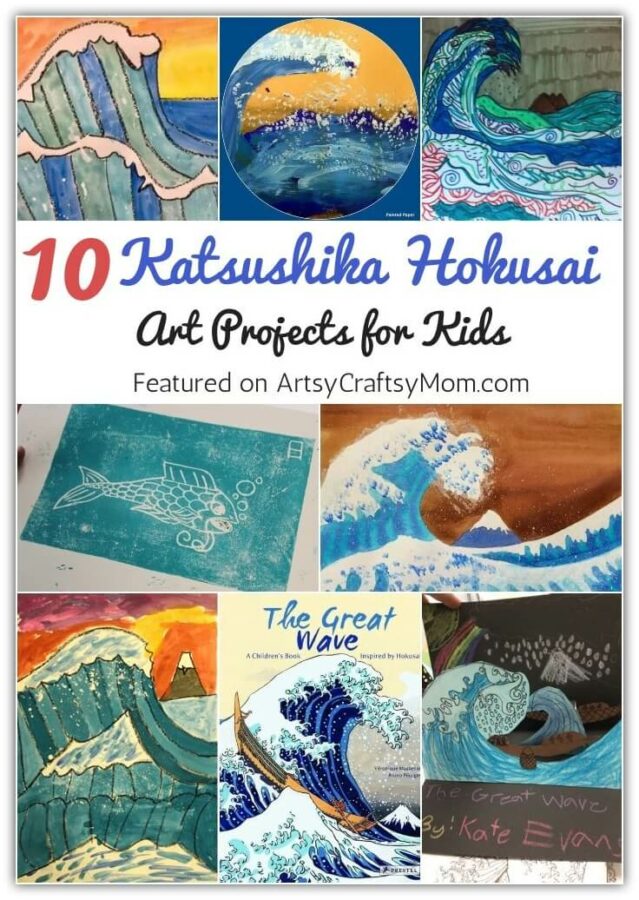 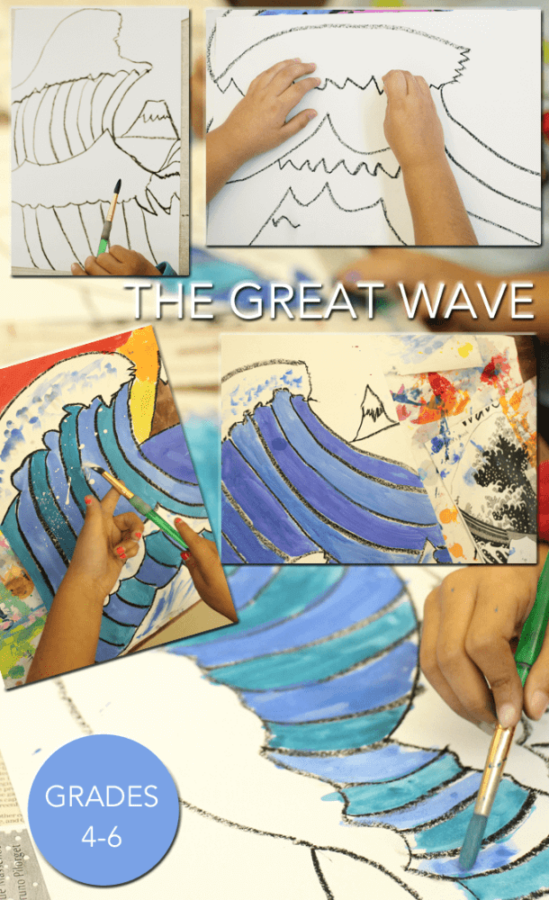 In case you’re wondering why someone would want to paint so many views of a single mountain, you need to understand the significance of Mount Fuji in Japanese culture. According to legend, a goddess placed the elixir of life on top of Mount Fuji, making it a symbol of immortality. Since then, Mount Fuji has been an integral part of Japanese culture, religion and of course, art! Deep Space Sparkle helps us understand this better with an art project inspired by The Great Wave. 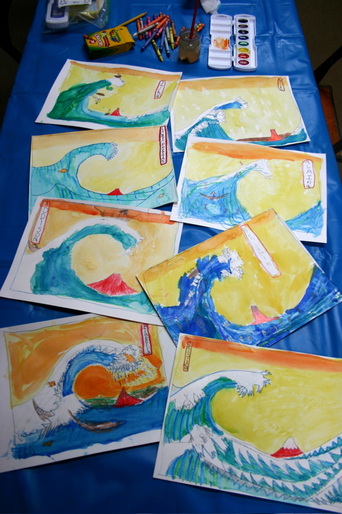 When you think of Japan, it’s hard not to think of Manga, and contrary to what many people believe, Manga is not new! In fact, Hokusai collaborated with writer Takizawa Bakin and released their first Manga volume in 1814 – which became a hit instantly! Create your own collection of Manga drawings taking inspiration from this project from Blue Church Art.

3. The Great Wave Pop Up Art 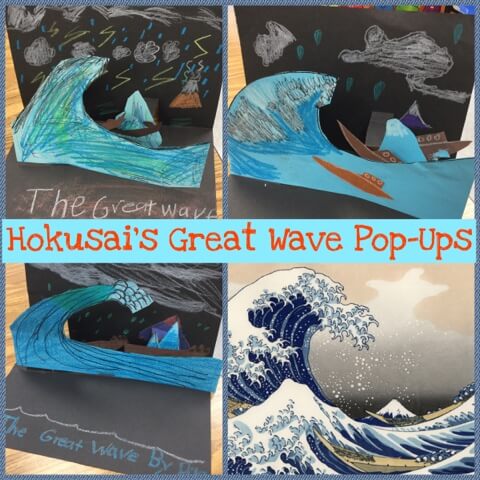 Hokusai’s painting series of Mount Fuji was so famous that many other artists drew inspiration from it. A French artist named Henri Rivière even created his own set called the ‘Thirty-six views of the Tour Eiffel’, much later in 1902. You can also take inspiration from Hokusai and create some 3-D recreations of The Great Wave, as Mrs. Knight’s Smartest Artists have done! 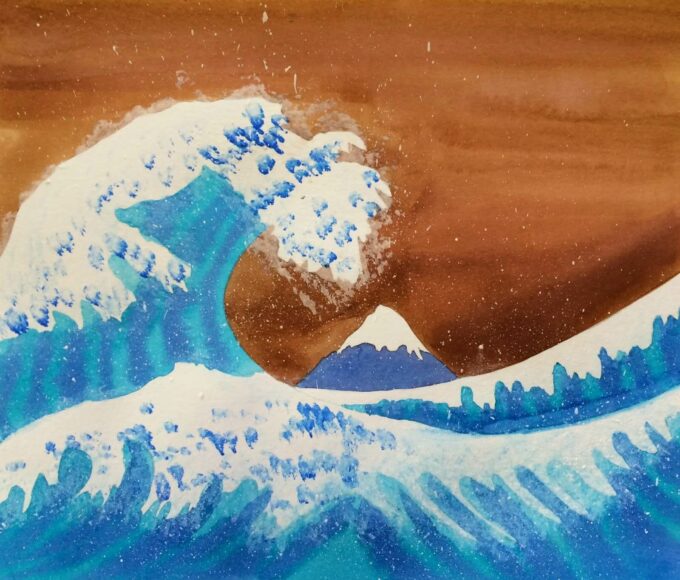 We know that Hokusai was introduced to ukiyo-e when he joined Shunshō’s studio. In those days, the subjects of this art form were mainly actors, courtesans, and the like. However, Hokusai decided to do things his way and focused his attention on landscapes and the common people of Japan. We love that he broke the mould and took a new view of a traditional art form! Do the same by putting your own spin on this art project from Kathy’s Art Project Ideas. 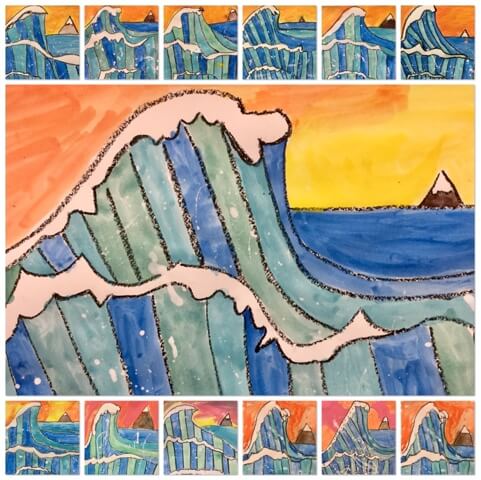 We’ve added an oil pastels project from 2 Soul Sisters to this list of Hokusai art projects for kids. When we think of Impressionist painters, we often remember the artists from European countries. However, Katsushika Hokusai is believed to have influenced the Impressionist movement, and his influence can be seen in the paintings of Monet and Renoir. Hokusai’s work was considered of great value and was collected by artists like Franz Marc, Gustav Klimt, Edgar Degas and even van Gogh. Degas even said that he wasn’t just “one artist among others”, but “a whole world in himself”!

6. The Great Wave: A Children’s Book 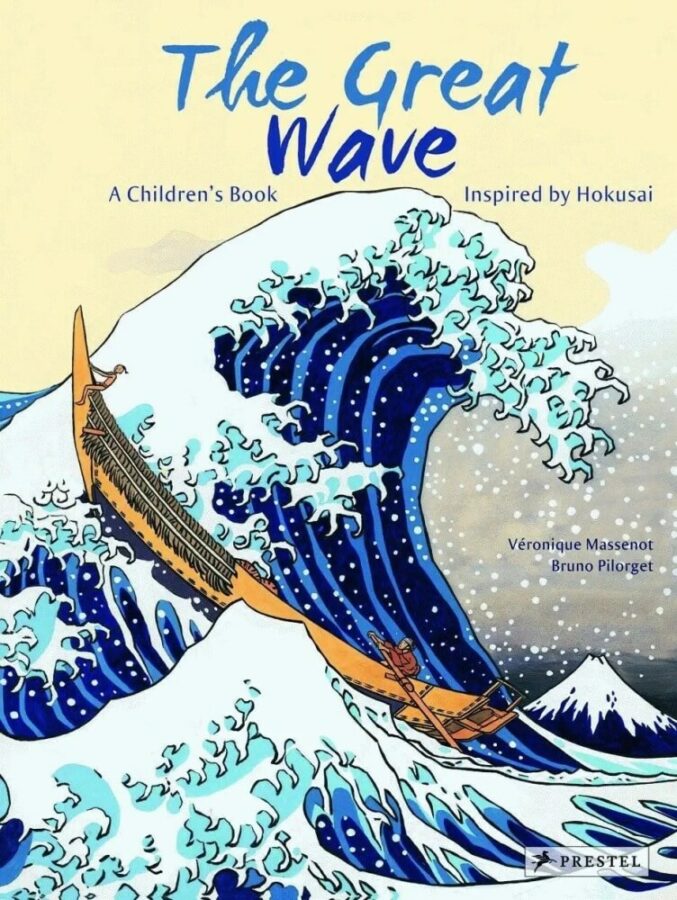 Books are a great way to introduce young kids to any artist’s work, and it is also less overwhelming than lots of art projects. We love this one by Veronique Massenot, which focuses on a simple story and uses it to bring out the brilliance of Hokusai and his work. The book features beautiful reproductions of Hokusai’s famous paintings, in full color and detail. 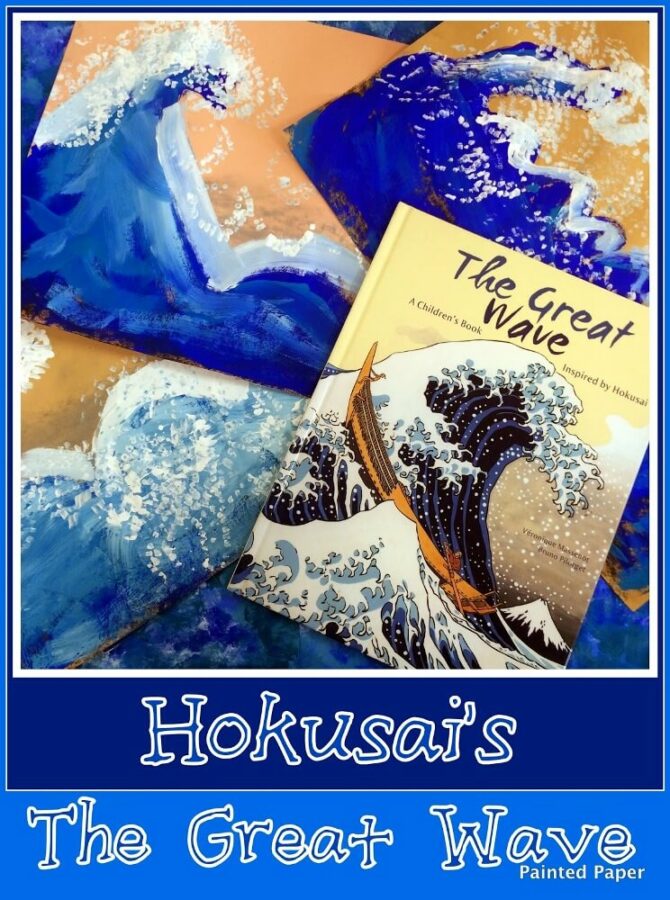 Painted Paper Art takes inspiration from The Great Wave book and creates some eye-catching paintings. Hokusai was quite a showman himself, creating iconic works of art like a huge portrait spread over a whopping 200 meters. He apparently used a broom and buckets to paint it! He also did a painting where he had a chicken run around after dipping its feet in red paint!

8. Art and Science with The Great Wave 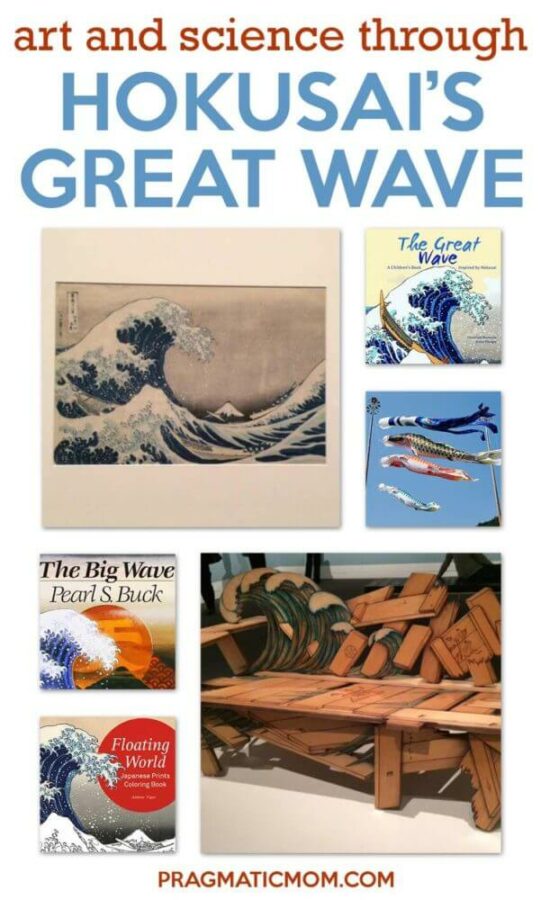 We love it when art meets science and math, which is why we’ve added this one from The Pragmatic Mom to our list of Katsushika Hokusai art projects for kids! Speaking of kids, Hokusai had 5 children, of whom his youngest daughter, Oi, also became an artist. Oi broke the stereotype of women being only homemakers to become an artist in her own right. There is also a movie based on her, named ‘Miss Hokusai’. 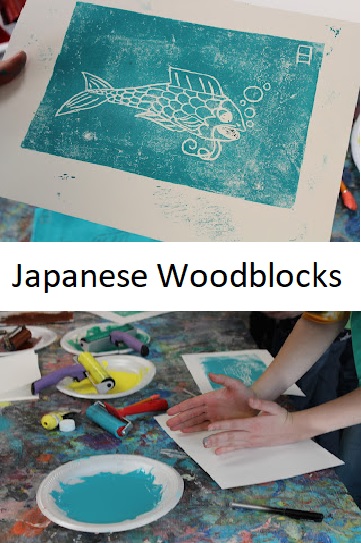 Creative Hands Creative Minds has a project that shows us how to use wood blocks to create art. Hokusai’s process was quite elaborate – he first created a drawing on paper, and then glued it to a wood block to make the carving. The carved block is then covered with ink and printed onto paper to create the final picture. Since the final picture will be laterally inverted, care needs to be taken right from the start of the project! 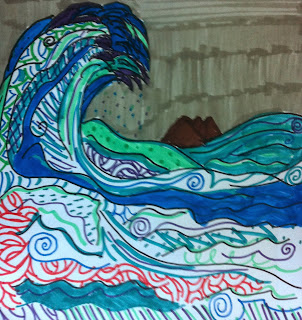 If you’ve got kids who aren’t yet familiar with paint, you can try out this project from Parent Art Docents that uses markers to create patterns. Hokusai showed us that age is not an issue when it comes to creating art. He started at the age of six, and went on to work till he died. He felt that by his seventies, he had just begun to understand the structure of things, and believed that he would achieve some progress by the age of 110! 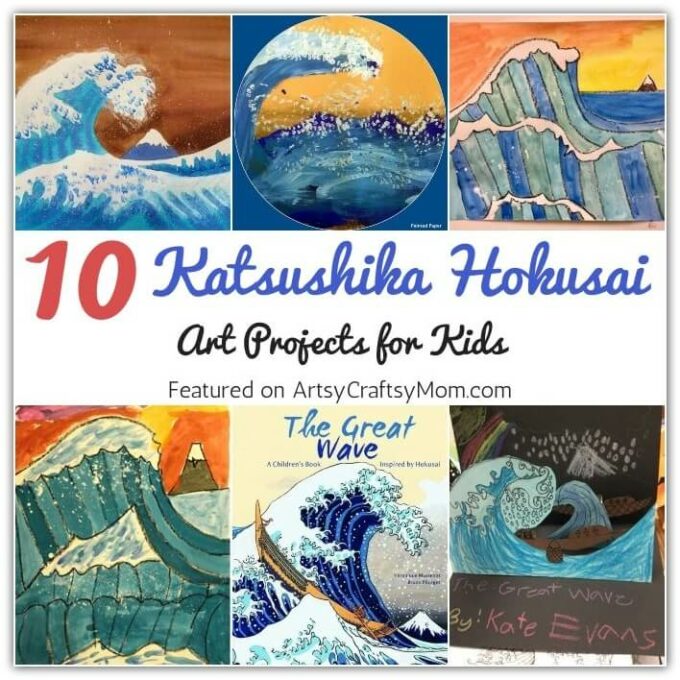 These Katsushika Hokusai art projects for kids are sure to interest them, since it’ll be intriguing to learn about the man who considered himself a beginner even at the age of 73! It also shows them how one thing can have many different views, each of which are beautiful on their own. Hokusai’s work is an exercise in observation and constantly improving, and how waves and mountains can become talking points across the world! 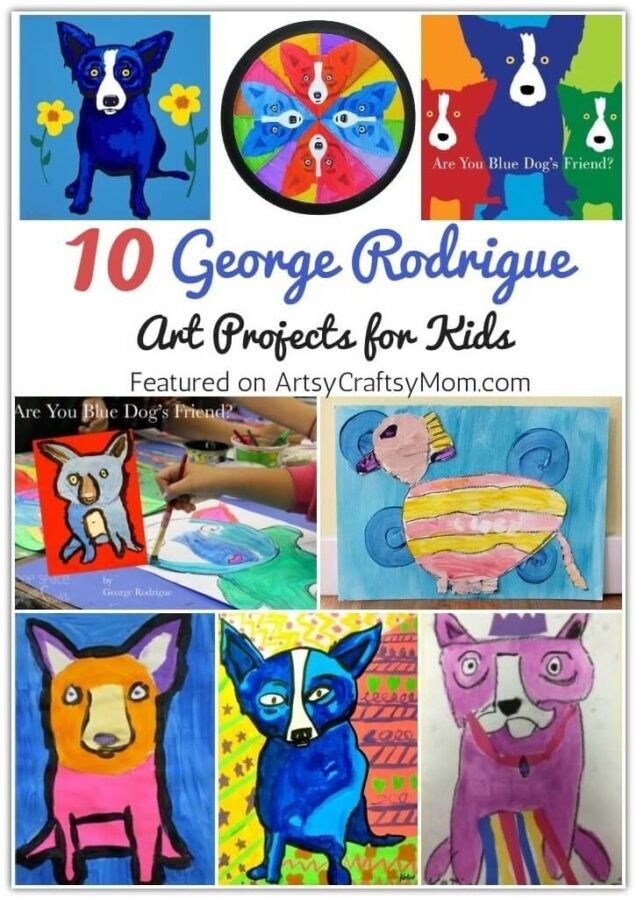 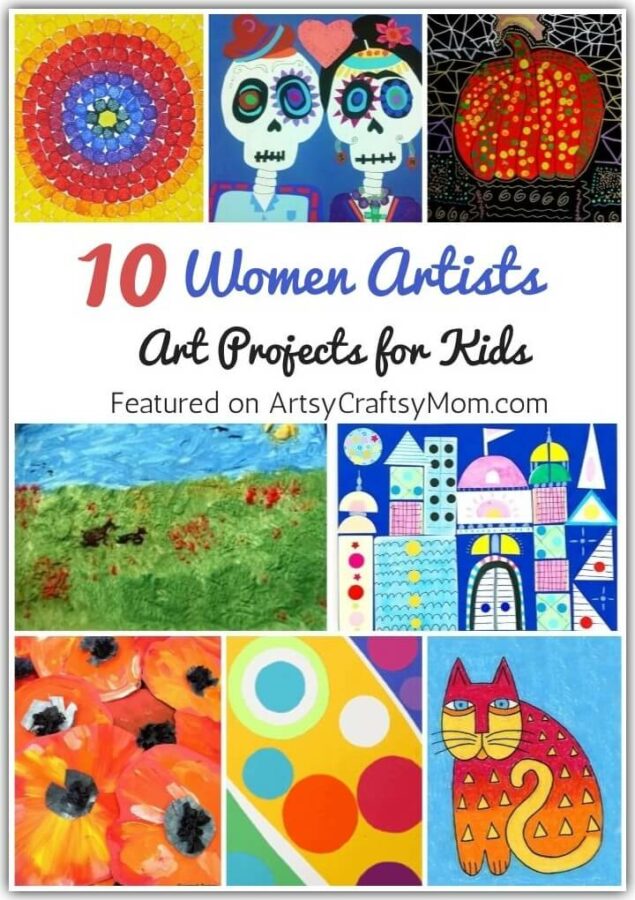 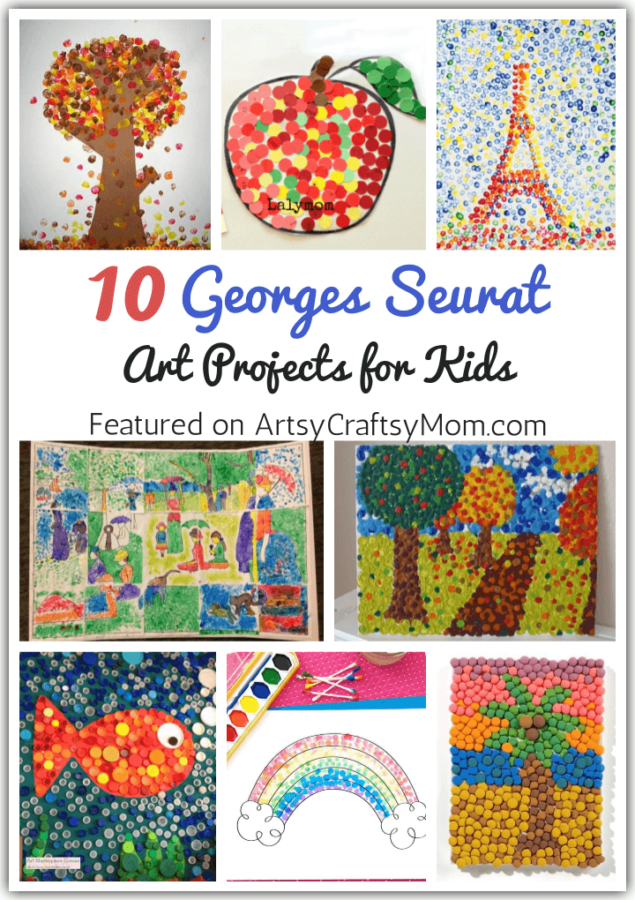 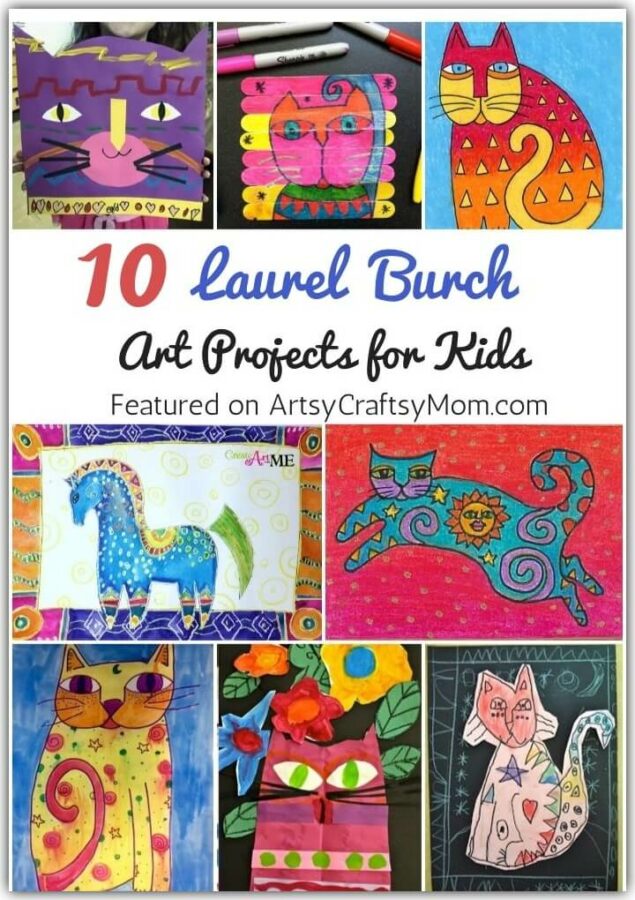