These Pretty Parrot Crafts for Kids are perfect for World Parrot Day on the 31st of May! Bright, colorful and easy to make, these are must-try for this weekend!

One of my favorite childhood movies was Disney‘s Aladdin. I loved the music and the whole idea of the magic carpet, but my favorite character wasn’t Aladdin or Jasmine or even the Genie. It was Iago, the parrot!

Iago was part of the bad guys team, but he was so entertaining – second only to the Genie. I admit there wasn’t a single time I didn’t laugh when he was on screen!

And he’s not the only one – there are many other parrots in popular culture that steal the show when the spotlight’s on them.

Maybe that’s to do with how special parrots are. They’re amazing creatures, and quite similar to humans in many ways; a pet parrot requires as much care and attention as a three year old child!

There are many other cool facts to learn about parrots, and since it’s World Parrot Day on 31st May, we think it’s the perfect time for some pretty parrot crafts for kids! 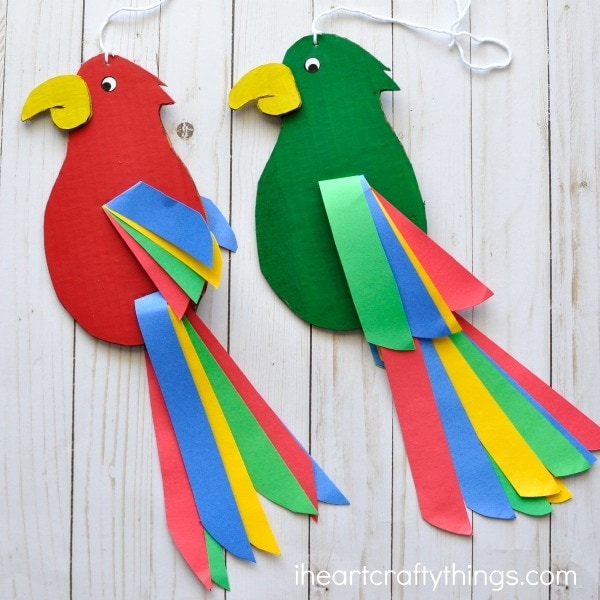 One of the most gorgeous birds on the planet are parrots, especially species like the Scarlet Macaw, and the Eclectus parrots. I Heart Crafty Things has a beautiful craft that’ll instantly brighten up your room and bring life to a dull space by twirling! 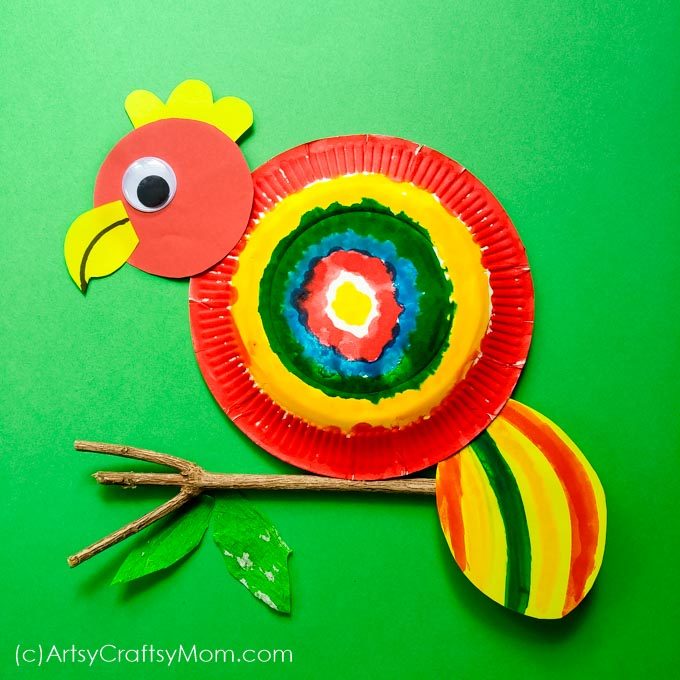 You may have noticed that parrots have very strong curved beaks, like in this paper plate parrot craft. These beaks are really strong – strong enough to crack nuts and even open metal cages! That’s why it’s advised to keep your fingers far, far away from that beak! 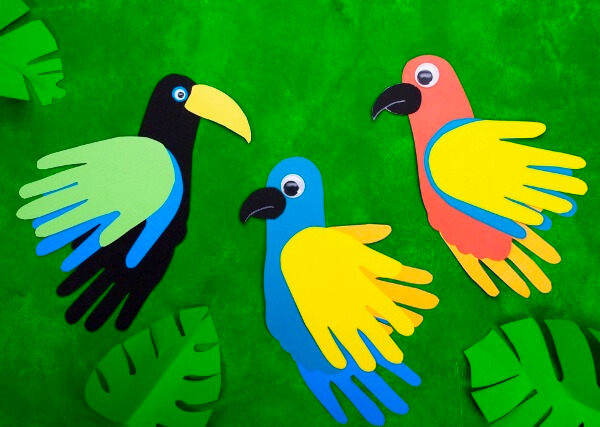 This easy handprint craft of a group of parrots from Super Simple reminds me of a fun story. Sometime in the sixties, a shipment of parrots was traveling through JFK airport, from where they accidentally got out. The parrots adapted themselves to city life, living on food scraps and making nests out of whatever they found. Now, there are about 550 parrots who call New York City their home! 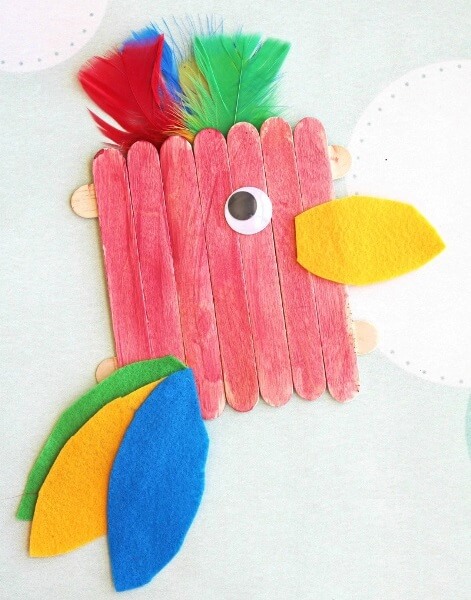 We love this project from Darice Blog for the use of various craft materials. The project is beginner friendly, but it makes use of many materials like craft sticks, felt, feathers and googly eyes. 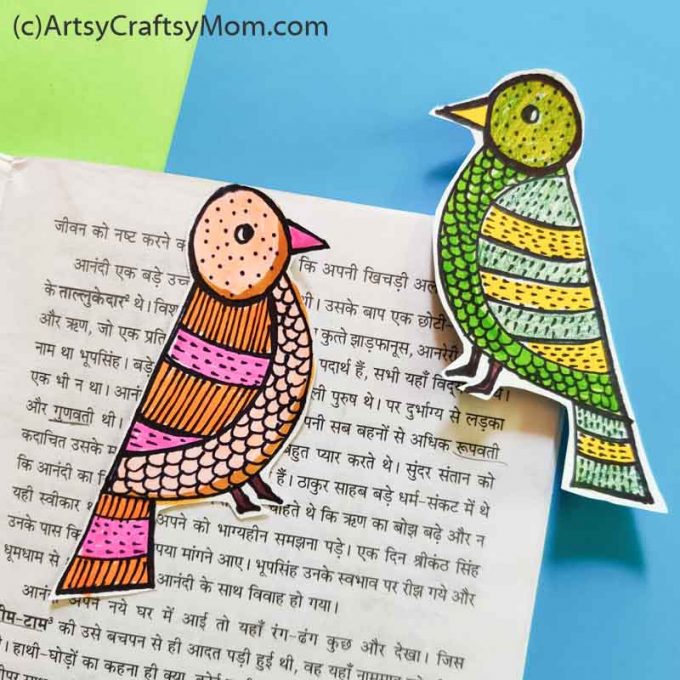 These Gond art parrot bookmarks may not be able to read your book, but parrots in general are pretty smart. They can mimic human speech, they understand zero, they can add and subtract, and some can even solve complicated puzzles! This is probably because their brain circuit is similar to that of humans – in fact, parrots are believed to be as smart as a four year old human! 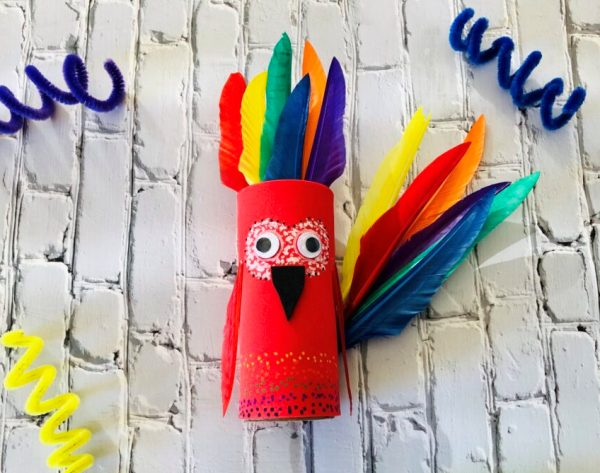 If you enjoy sensory projects with your little one, this one from The Toddler Lab is perfect. We love how colorful it becomes simply by using colorful feathers. You can also add little feet out of foam and some wings out of felt to increase the sensory experience. 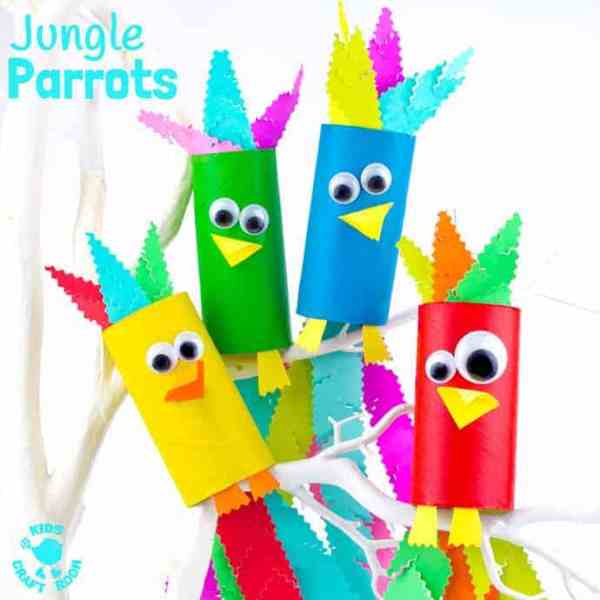 Doesn’t this group of parrots from Kids Craft Room look like they’re having loads of fun? Parrots are social creatures and they can get pretty noisy too. Not surprising then, that a group of parrots is referred to as a ‘pandemonium’ – a very apt name! 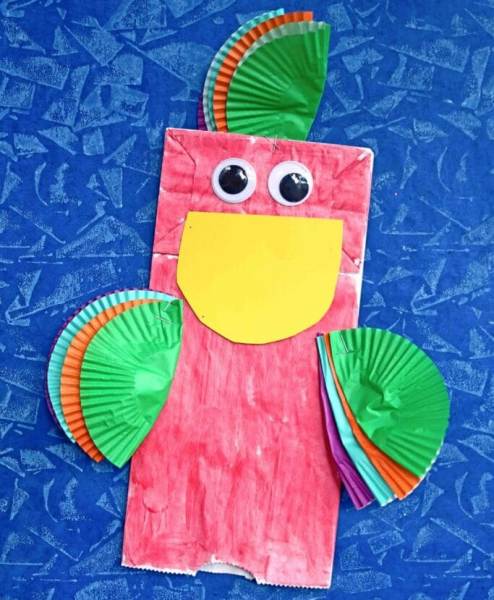 We love puppet crafts, especially paper bag puppets like this one from Glued to My Crafts, since it’s easy for even young kids to handle. You can of course make your parrot speak, but try making it sing too! No, it’s not impossible – the lead vocalist of a band called Hatebeak is a parrot named Waldo! 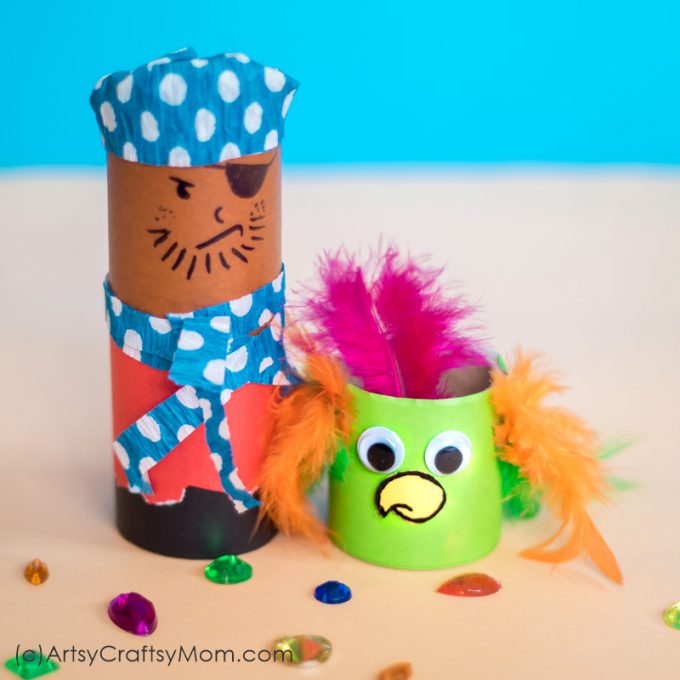 Can you have a list of parrot crafts that doesn’t include a pirate somewhere? Of course not! This association of parrots resting on the shoulder of pirates began with the novel ‘Treasure Island’ by Robert Louis Stevenson in which the pirate Long John Silver has a constant companion in the parrot named Captain Flint. 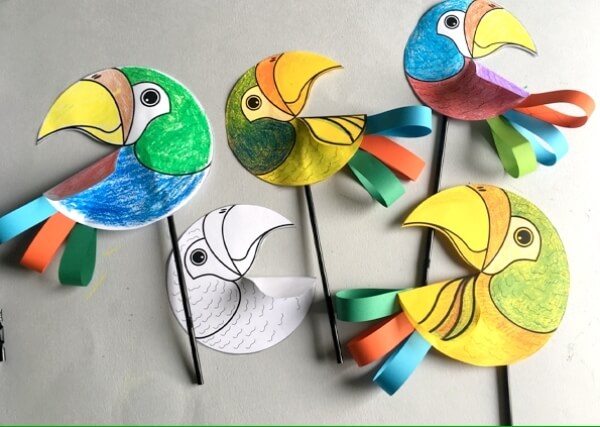 We love these cute parrots from Krokotak – they are made with just paper and are super easy for young kids to make. Don’t stop at just one, make a group of multiple parrots – especially since parrots are super social and always hang around in groups of 20-30. 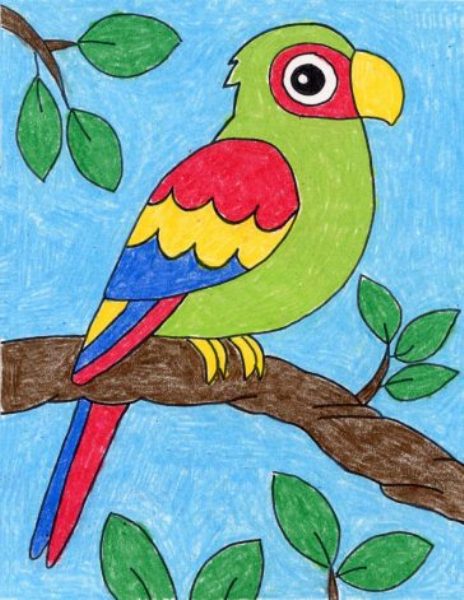 If you love parrots and would like to draw one by yourself, check out this detailed tutorial from Art Projects for Kids. Speaking of art, there is an interesting center in Saint Paul, Minnesota. Here, rescued parrots are taught to paint, and the art is then sold to raise money for the place! 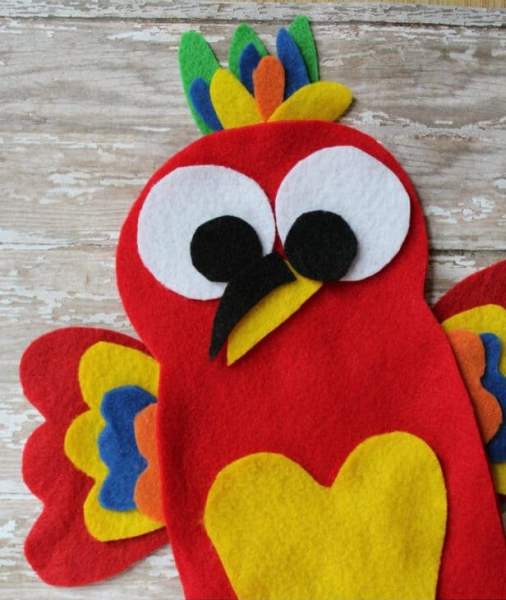 If you’d like a parrot puppet that’s a little bit more durable, try making this felt puppet from This Mama Loves. It’s all well and good to own a parrot puppet, but if you live in India, it’s illegal to own a real parrot as a pet! If caught, you could find yourself paying a huge fine – or even spending up to 6 years in jail! 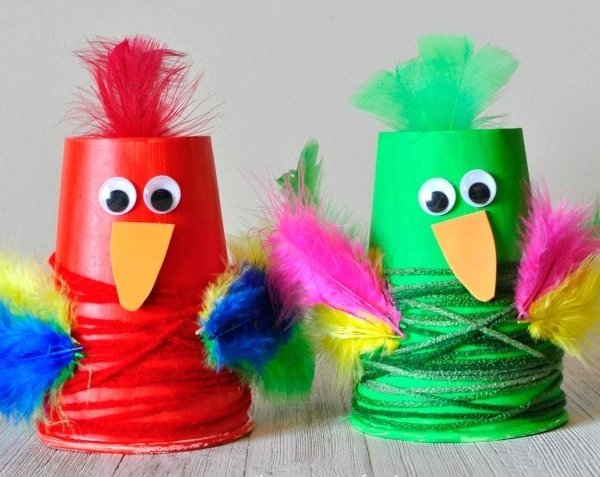 How cute is this parrot couple from I Heart Crafty Things! Parrots are largely monogamous, and they mate for life. They do everything together – hunting, grooming and sleeping. The partnership is strong and breaks only when one of the birds die. Not many creatures of the wild are this dedicated! 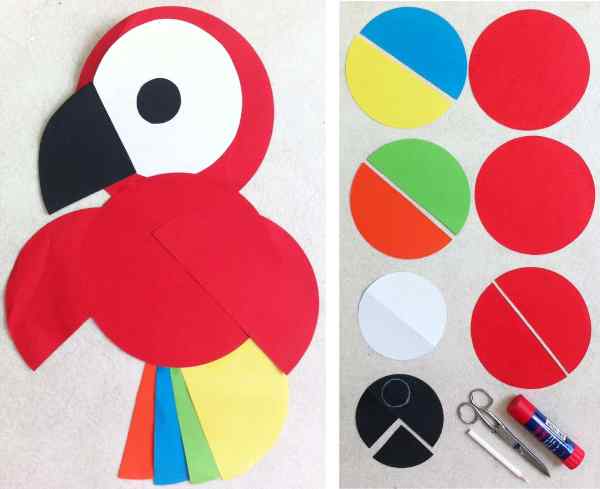 If you’ve got a little one at home who’s learning about shapes now, Miss Stephanie has the perfect craft for you! Show your munchkin how you can use just circles and parts of circles to create a full parrot out of colored paper! 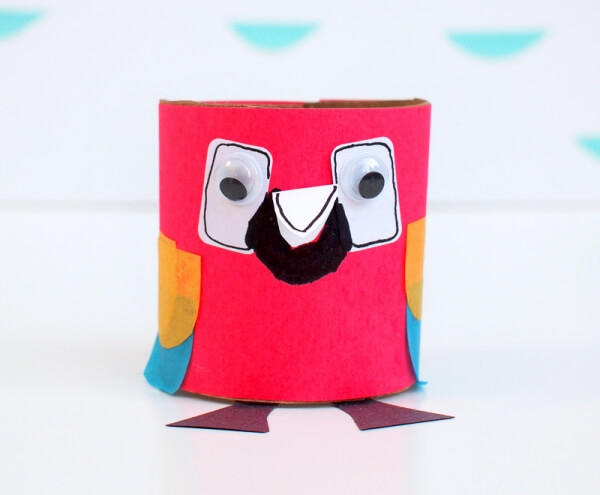 Molly Moo Crafts features another parrot craft that is a little different to the others. There are over 400 species of parrots in the world, and they vary widely in their characteristics. However, there is just one species of parrot that cannot fly – it’s the Kakapo parrot. The Kakapo parrot is also the largest parrot in the world, and one of the longest living ones.

Aren’t parrots among the most interesting birds we know? It’s no wonder they get such meaty roles when it comes to movies and TV shows!

If you live in a place where owning a parrot is legal, they can prove to be real fun companions. They enjoy company, can converse with you and are a sight for sore eyes.

If you enjoyed these parrot crafts for kids, go ahead and check out our list of bird crafts – they’ll keep you occupied for hours! 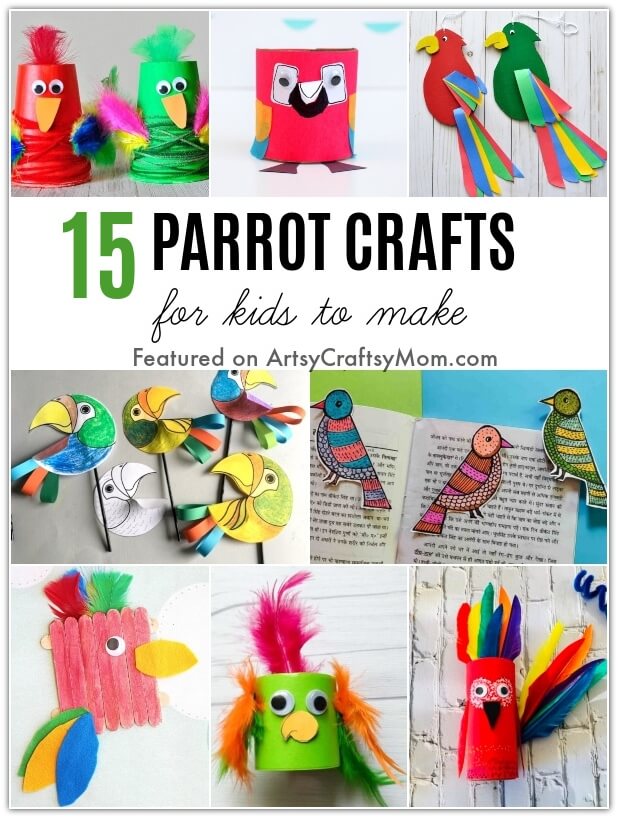