Learn all about shadows and portraits with these 10 Resplendent Rembrandt Art Projects for Kids! Get inspired by the artist through study lessons about his art.

“Painting is the grandchild of Nature.” ~ Rembrandt Van Rijn

When we talk about art, most people expect it to be beautiful, or even perfect. The colors, the subject, should all be pleasing to the eye. However, great artists know that art is much more than just being attractive, it should also be real. For instance, look at the painting below and think about what you see. 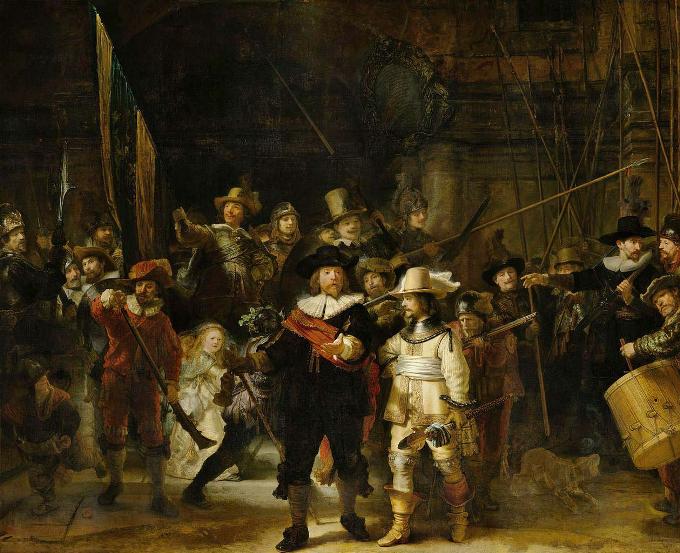 There seem to be lots of people, yet, your eye is immediately drawn to the few in the foreground. There seems to be a lot of movement, and the entire painting is buzzing with activity!

Rembrandt Harmenszoon van Rijn, usually simply known as Rembrandt, was a Dutch Golden Age painter, printmaker, and draughtsman. An innovative and prolific master in three media, he is generally considered one of the greatest visual artists in the history of art and the most important in Dutch art history. Wikipedia

Why is Rembrandt so famous?

The fact that you could feel the motion in a two-dimensional painting proves that art can also feel very real. And that’s what the creator of this piece, Rembrandt, also felt. This Dutch artist is the one who painted this massive painting, the Night Watch. If you want to get an idea of how big it is, look at the men in the painting – they’re nearly the size of a man in real life!

The detailing and the play of light and shadows in this painting tell us that Rembrandt was an incredibly talented painter, but he was also an accomplished draughtsman and printmaker. This is the reason Rembrandt is considered among the greatest artists that ever lived.

Rembrandt’s life and art teach us that it’s important to be authentic and for that to reflect in our work. Since it’s Rembrandt’s birthday this month, we think it’s time we learn a little more about the artist, with some Rembrandt art projects for kids. This is going to be quite interesting! 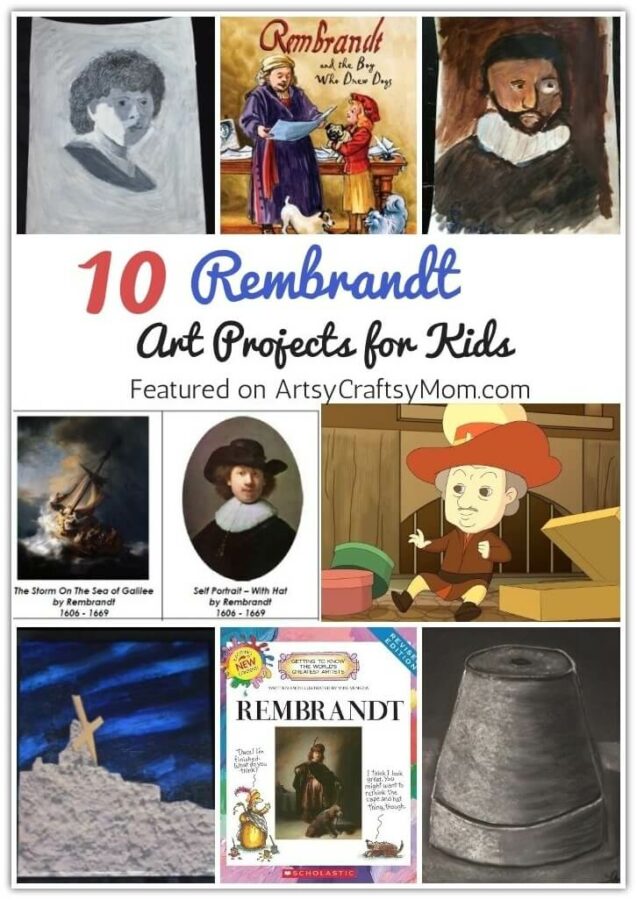 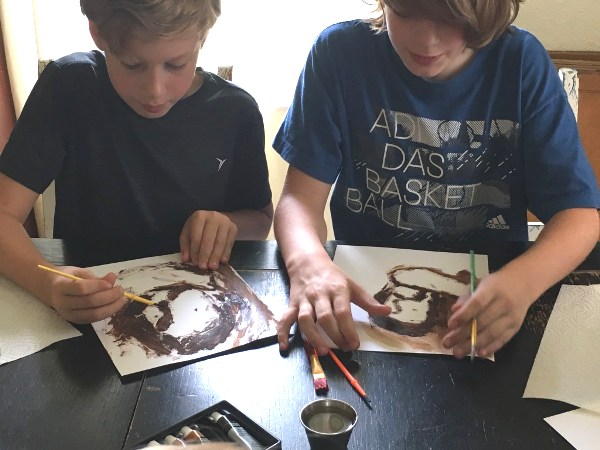 Rembrandt has painted several portraits, and if you look at them closely, you’ll find that there is something similar in all of them. The person’s face is always at an angle, with the nose creating a division between the part of the face that is lit and the part that is in the shadows. You can try this out on your own as Nicki Truesdell has done using acrylic paints. 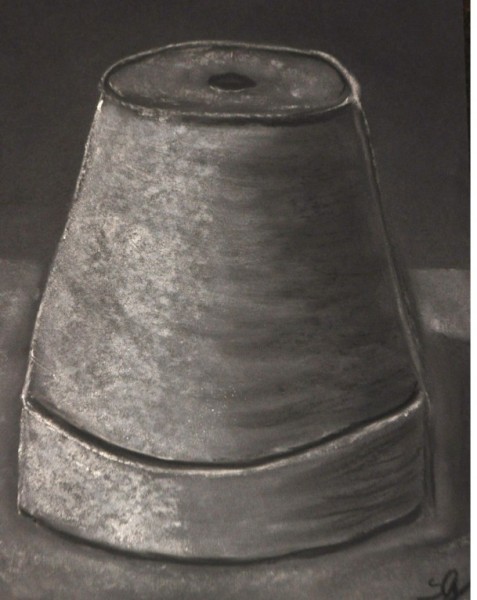 Rembrandt was an artist whose style kept evolving over the years, but at every stage, he was always a master of shadows and light. He painted many biblical scenes, including those of hellfire. He was an expert in painting the fire as well as the way it reflected on things around it. You can try a bit of your own shadow play with this project from Liberty Hill House as inspiration.

Rembrandt included a wide variety of subjects in this art, including his wife and son. The Bible was a great source of inspiration and he used his imagination to visualize the scenes in it. He also painted landscapes that always tended to have a feeling of movement in them. Susan Evans takes inspiration from Rembrandt to create a mixed media scrapbooking project.

4. Rembrandt and the Boy Who Drew Dogs 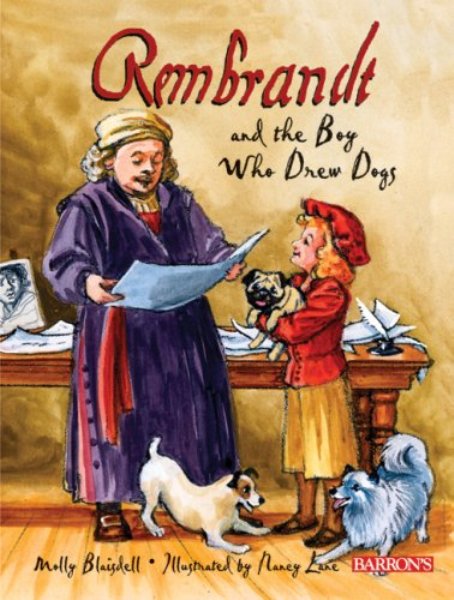 Molly Blaisdell brings us a lovely little book about a father and son living in Amsterdam in the 1650s. The story is about how Titus, Rembrandt’s son, wants to become a famous painter like his father and is quite determined to get there! The sweet story is accompanied by beautiful illustrations by Nancy Lane and also features some of the famous works of the artist. All in all, this is a great book to introduce the artist to young children. 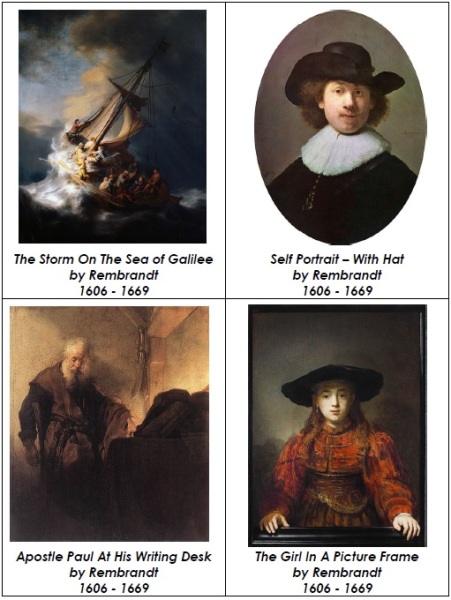 If you’d like to delve a little more into Rembrandt’s various works, these art cards by Teachers Pay Teachers are perfect! A fun fact about Rembrandt – he was greatly inspired by global art, although he never left his country in his lifetime. He has even painted miniatures of Mughal emperors like Akbar, Jahangir, and Shah Jahan, depicting the costumes of a different time and place. 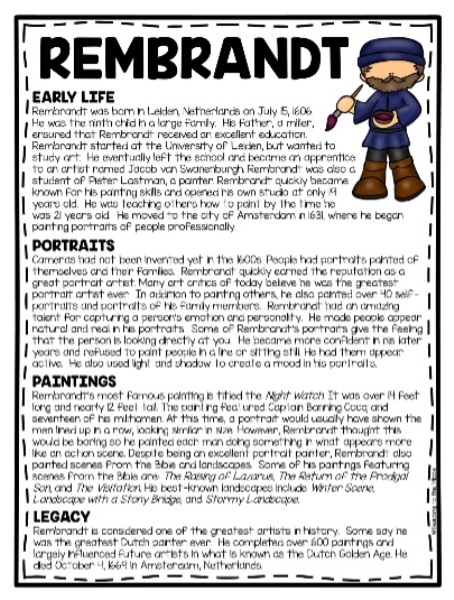 Teachers Pay Teachers has another great free download for little art enthusiasts that teaches us about Rembrandt’s life and work. Early estimates were that he produced over 600 paintings and 2,000 drawings! Rembrandt faced several tragedies in his life but continued to work and his paintings often depict his state of mind. 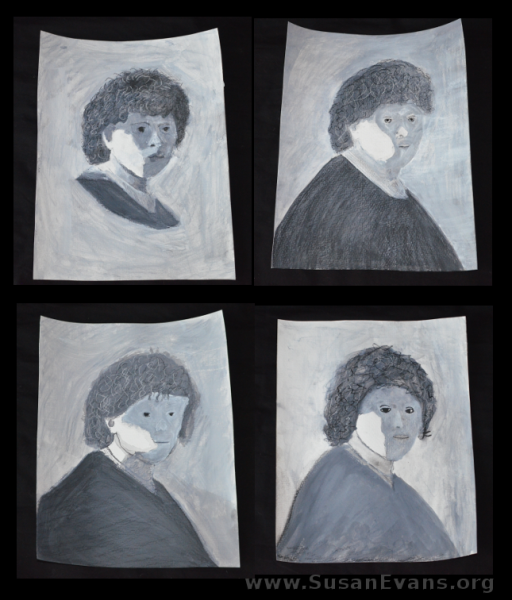 Rembrandt has produced an impressive number of self-portraits, showing himself at various stages through his life, from ages 22 to 63. He was an artist who believed in showing reality, and because of this he never painted himself as more handsome than he was – his authenticity is what makes his work stand out. Take inspiration from Rembrandt and create some self-portrait sketches of your own, as Susan Evans has done with charcoal and gesso. 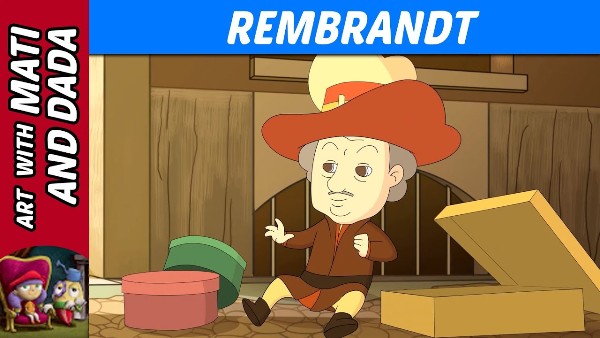 We love this fun animation from Art with Mati and Dada that gives us a glimpse into Rembrandt the artist so we can get inspired. Rembrandt himself was inspired by many artists of his time and even by Leonardo da Vinci. It is believed that Rembrandt’s paintings like The Night Watch were inspired by the way groups of people were arranged in Da Vinci’s Last Supper. 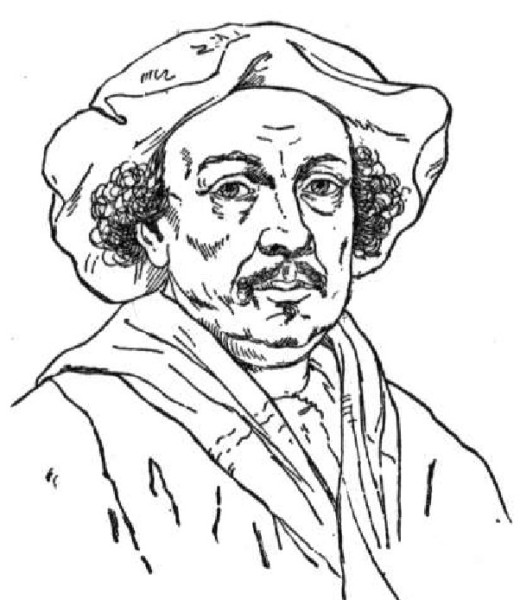 Many experts say that Rembrandt painted people with a ‘kind hand’. He was a compassionate person and treated people of different faiths with kindness and love. Marc Chagall, the Russian-French artist who was Jewish, claimed that Rembrandt was very good to him. As you learn more about Rembrandt, it’ll be interesting to have some fun with this coloring page from Kids n Fun.

10. Rembrandt: Getting to Know the World’s Greatest Artists 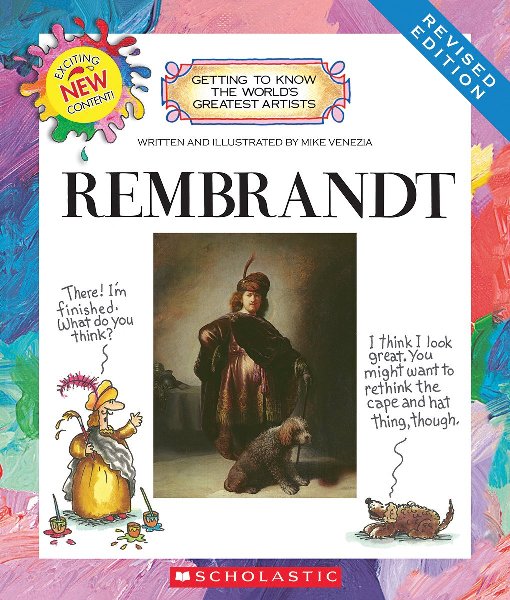 This book by Mike Venezia is a fun and delightful introduction to Rembrandt, with some really quirky illustrations. It also features many of Rembrandt’s famous paintings and will have school-going kids engrossed. This is also a great time to learn fun facts about Rembrandt, and what other artists thought of him. Auguste Rodin, the French sculptor, was aghast when someone compared him to Rembrandt, stating that Rembrandt was ‘the colossus of art’. Vincent van Gogh wrote that it was justified to call Rembrandt a magician; that was how mysterious his work was. 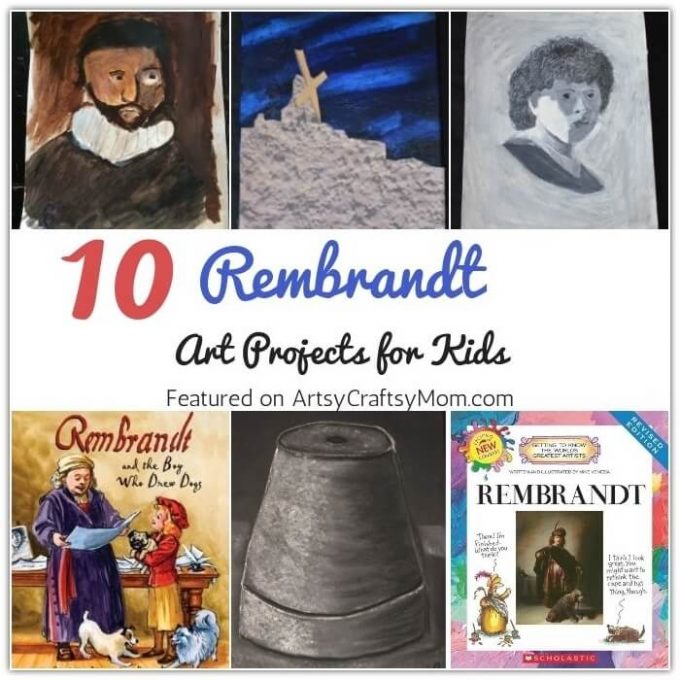 Rembrandt’s paintings are quite brooding and dark, with lots of shadows, but they’ll still be intriguing for kids. It helps to pepper the learning and art with facts about his life and legacy. For instance, did you know that the theme song for the sitcom Friends was written by a band called ‘The Rembrandts’? That’s how synonymous his name is with art! 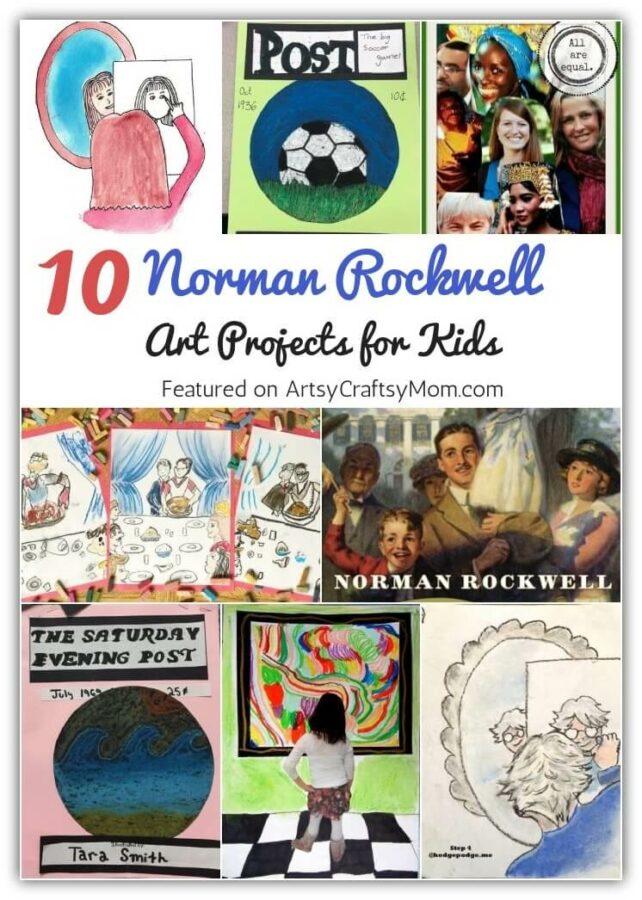 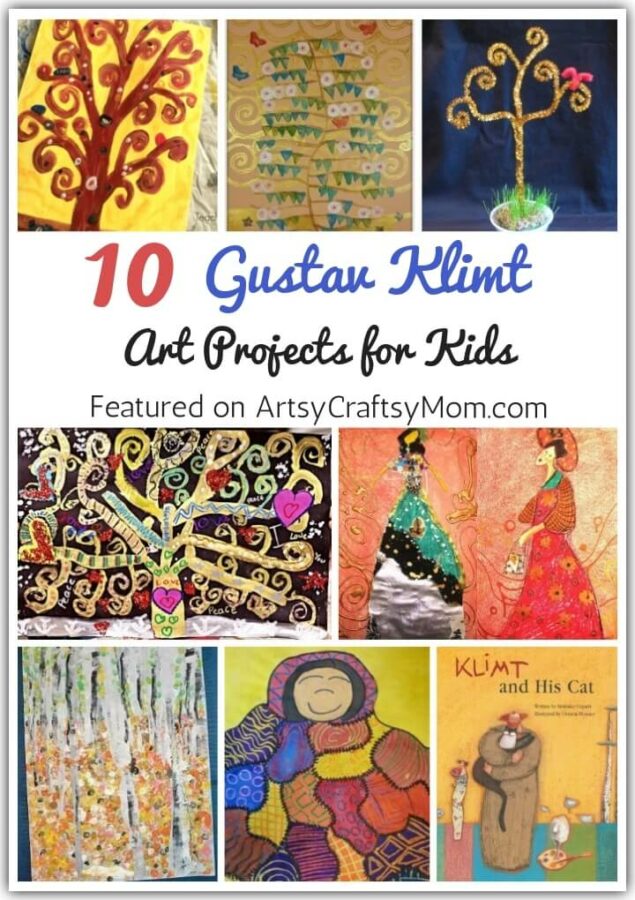 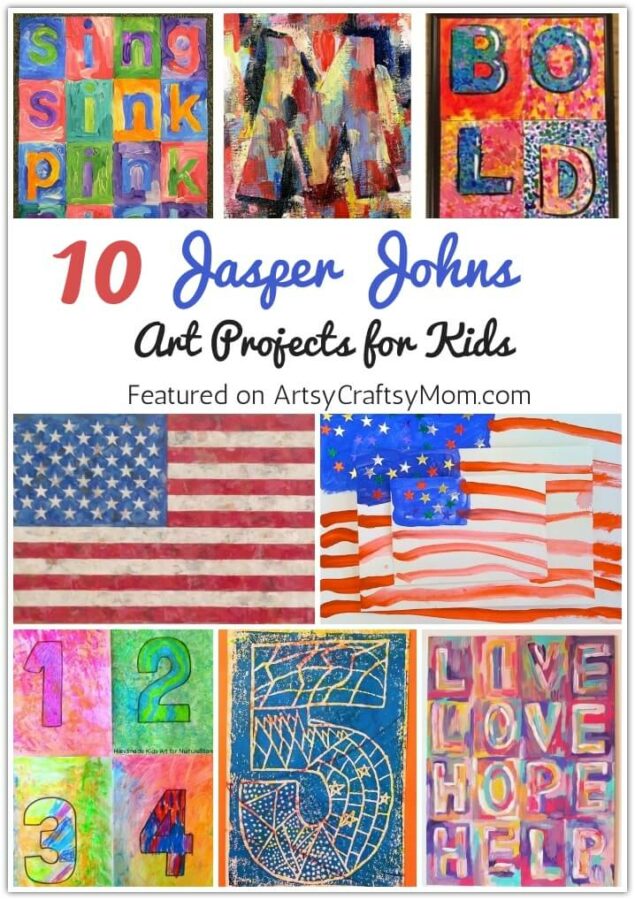 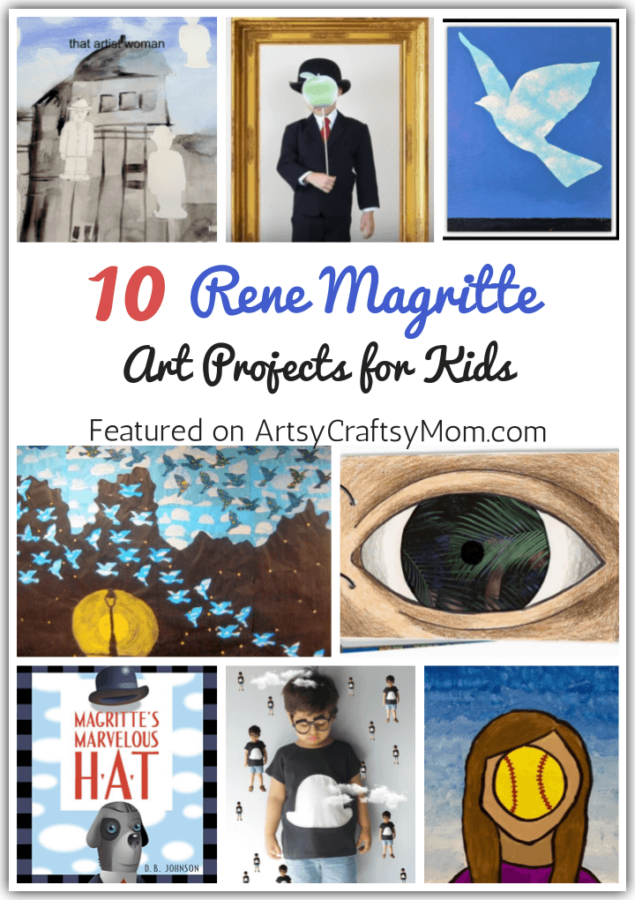