I have been really lazy with Lil P updates, Haven’t I? She is going to be so cross with me when she grows up. Here is one such moment from her life I wanted to blog about. Lil p’s school had their annual Sports day event in Oct, 2012. Lil P is not too keen about this event and each year, it is followed by tears and being upset that she doesn’t come in first / second or third. I think the school is really fair to each kid and does insist on each kid participating. I have personally seen her teachers hug each child after the race and pat them on their back for completing the race. No undue attention is giving to the winners .. They do get a medal though.

Now Lil p is not a natural born athelete.. and it doesn’t help that she has a super duper lazy mom like me! Hubby is ( rather was) quite athletic in his younger days but then I don’t see him being too actively involved in sports that relate to his daughter. Plus having flat feet doesn’t help her much either. Hmph we should be doing something about that, but I’m digressing.

So this year was no different. Lil p had mixed feelings about sports day and was crying herself to sleep agonising about the fact that she never wins any sports race. Last year her best friend won a medal and she was more upset about that.  Frankly, I don’t know what’s the best way to handle this concern of hers. I have tried to explain to her that participation is what matters, and that she should cheer her friends to win.. and she should practise more.It works a little but then she is very sensitive.

Please do tell me some tricks that works with your kid or any books that you recommend.

This year the hubby managed to cheer her up by promising to take a snap of hers on the podium [ 1, 2, 3 step] once all the prize distributions were over. And I promised to make a medal for her at home if she completed the race giving it her best shot just like last year

So the D-day finally arrived and I was happy that she woke up without tears and went to school. They had a regular pom pom dance and some fitness warm up moves which she loved doing. 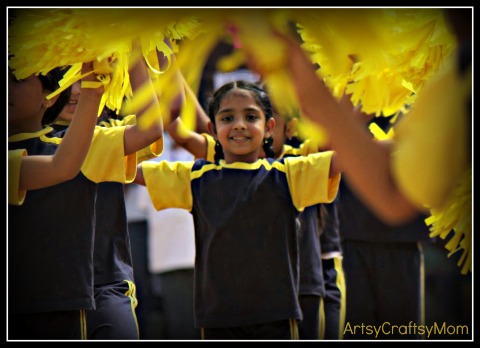 It was time for the running race and I was happy that she looked cheerful enough and did not create a scene.. Now Lil p and her best friend look very similar. The girl in the left with long hair is Lil P and the one on right is her best friend R. I had given one camera to my hubby to record a video and I had the DSLR to click pics. What do you call a man who can’t recognise his own daughter! I had sent him to the finish line to record a video and through the race he focussed on R instead of Lil p. Duh! we had a good laugh about it later.. and R’s parents were super thrilled with the video, so no harm done. 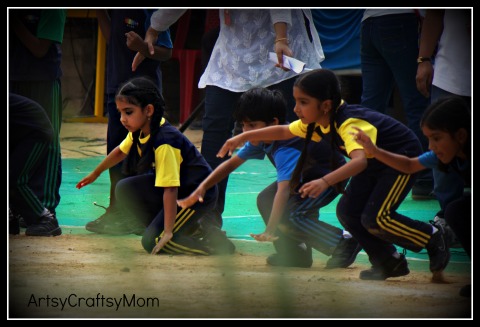 Anyway, I was happy to see Lil P was super excited after the race .. I don’t know what she was happier about 1. That she completed the race without tripping .. or 2. R did not win a medal this year. I have a sneaky suspicion its the latter.

We had been given a chit when we entered. That chit usually contains some numbers and these determine who runs in the parent’s race. In Nursery, I had got a chit with some random number that was called out and I had run [huffed & puffed my way] through  the 50 metre running race. In Jr Kg I was happy that I got a blank chit, but people with blank chits were called upon for the race.. So I grumpily went and ran some potato race or something. Last year I skipped the event 😉 .. not because I was scared of the race, but because it was on a weekday.
This year I had wisened up and quickly handed over my chit to my husband. And as luck would have it, his number got called. Of the 500 parents in that ground what’s the probability that my chit gets called each year. Its like some divine intervention.. God reminding me that I better get some exercise one way or the other.. This year I was prepared! Ha! I sent hubby instead. But No! this year it was not a single run, it was a couple run!!!! I wanted to hide 2 feet under. After much coaxing from hubby &  my friends [ parents of lil P’s friends] I went. Thankfully this time the parents had to do a balloon race. The wives were given 2 balloons each that was tied to a long string. At the siren, we had to quickly tie each balloon inward at their ankle and the husbands had to complete the 50 metres without bursting the balloon. And we Hubby came second! yay!!! So Lil p did not get a medal but was mighty proud that her parents won! LOL.

The school gave us a T-shirt & a pen as a memento. 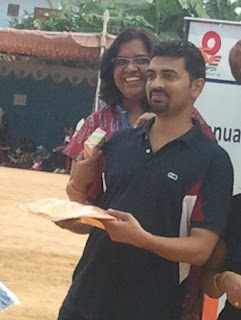 That’s me grinning like a Cheshire cat, and hiding behind Hubby dearest. 😀
All in all it was fun day. 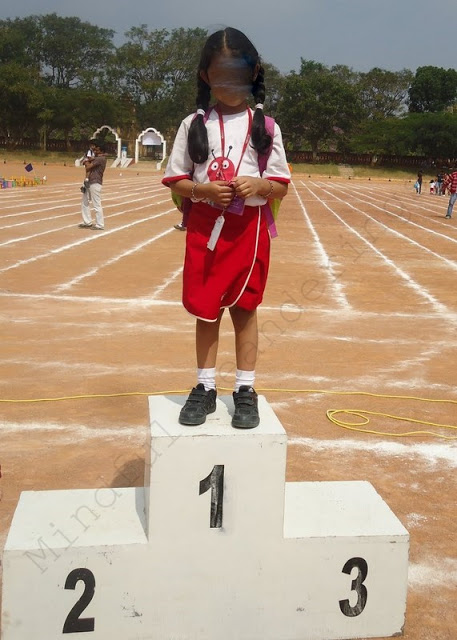 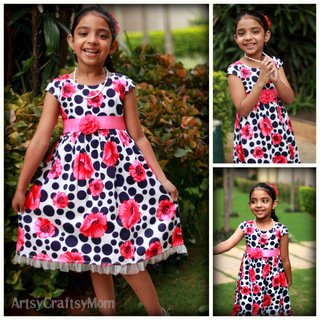