Math and Art are no strangers, as these Math Art Activities for Kids show! Be ready to be mesmerized by how even Math can look gorgeous!

“Go down deep enough into anything and you will find mathematics.” ~Dean Schlicter

Ask any random person what his least favorite subject was in school and you’re more likely to hear ‘mathematics‘ than any other subject. This seems to be a phenomenon that cuts across countries, classes, ethnicities – talk about maths being a true unifier!

However, most of us don’t have a similar aversion to learning art – not realizing that math and art are very closely related! Both bring out hidden facts and principles and both rely on patterns. Shapes, symmetry, perspective and so much more are common to both math and art! This is why STEM has turned into STEAM, with the A representing Art. In fact, math is an art!

If we can help our kids realize this fact, we can help them discover the beauty in math and their aversion will slowly melt away.  And since 14th March is the International Day of Mathematics, we think it’s the perfect opportunity to do this – through math art activities for kids that show the close relation between both subjects. I’m sure this will be eye opening for parents too, so be prepared to be blown away by the beauty in math! 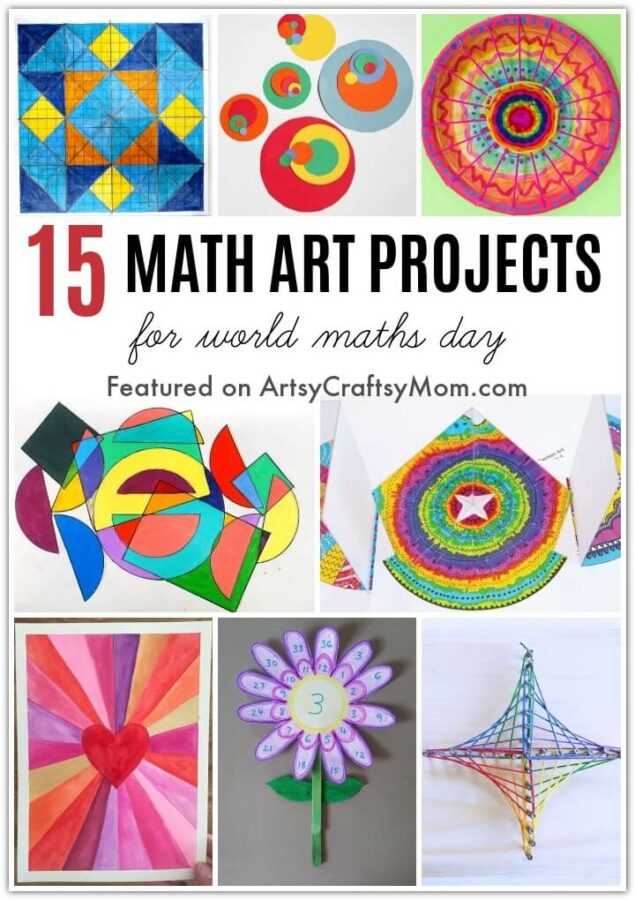 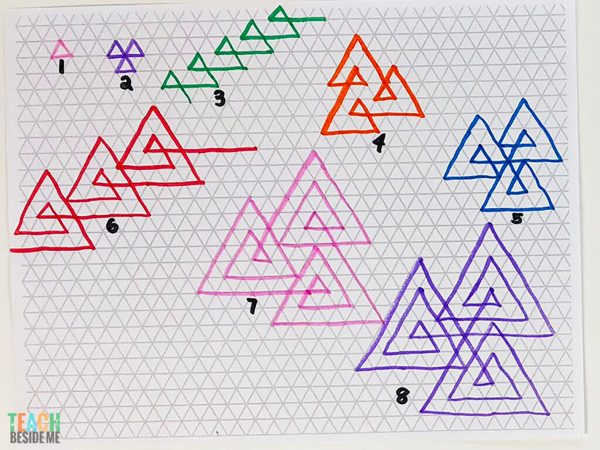 Spirolaterals are geometrical figures created by repeating a base pattern which starts with a line segment of a certain length and moves forward by increasing the length of the line segment. You can move the pattern in any direction and get all kinds of fun patterns. Check out the full tutorial on how to do this simple project at Teach Beside Me. 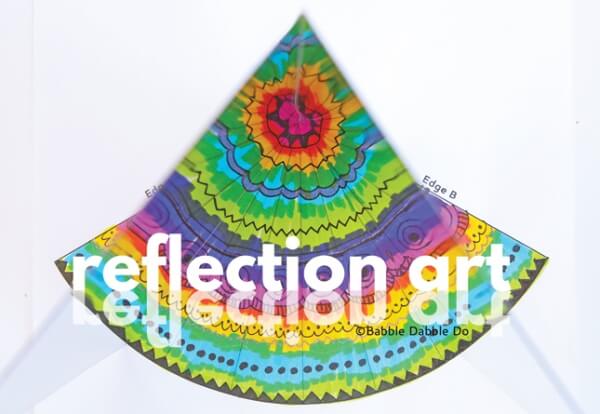 Learning multiplication is pretty mundane, and most of us learn it by rote. That’s not fun at all, especially when you have so many better ways to do it! Babble Dabble Do helps us understand how multiplication is repeated addition with this project that multiplies a drawing using reflections – stunning! 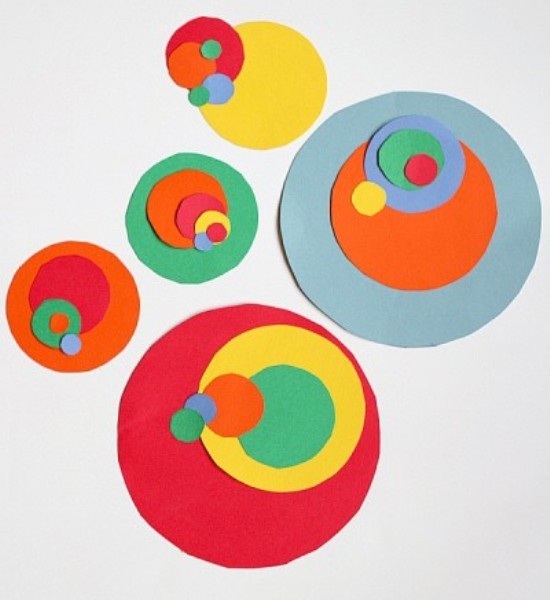 The Fibonacci sequence consists of numbers where each number is the sum of the preceding two numbers. This may seem pretty basic, but this amazing sequence makes its presence in the arrangement of leaves and flower petals and even among honey bees. Now you know that this is no ordinary number sequence! What do We do All Day brings this to life by creating a circle art project with radii corresponding to the Fibonacci number sequence. 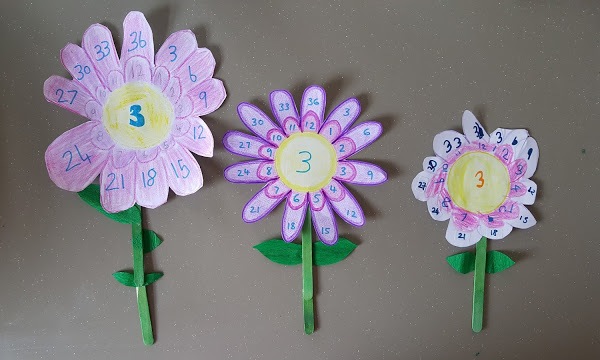 Waldorf Math helps kids understand the close relation of Math with their everyday life, like in art and in nature. That’s why we love this project from Multicultural Motherhood. The flowers are based on multiplication tables, but in a way that’s far more interesting than simply writing it down in a boring table! 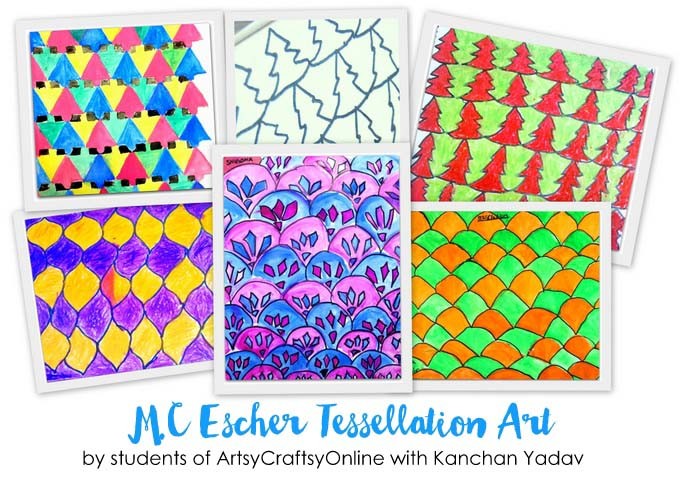 A tessellation is an arrangement of shapes in a repeated pattern, where they are placed closely together without any gaps. Tessellation is seen in many historical sites, especially in Spanish and Islamic architecture and Japanese origami. M C Escher was an artist who was enamored by tessellations and included it in his art. Kids can also do the same with these simple tessellation art projects. 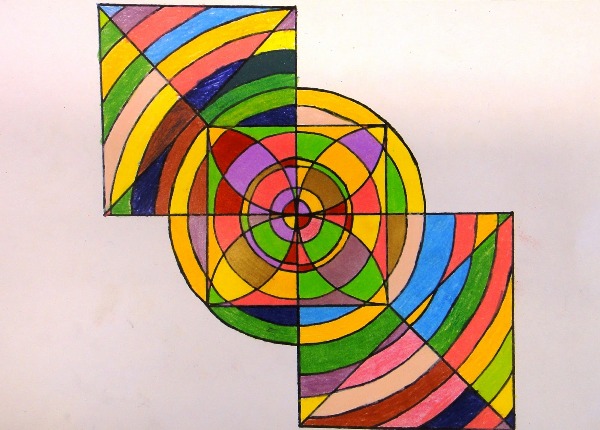 Using a geometry box is usually a milestone for kids, as they’re now officially in the ‘big league’. These instruments can be used to learn and create a variety of things, including some gorgeous art! Check out the tutorial at Art is What I Teach to learn how to make some beautiful designs using nothing more than a protractor, ruler and pencil – and of course colors! 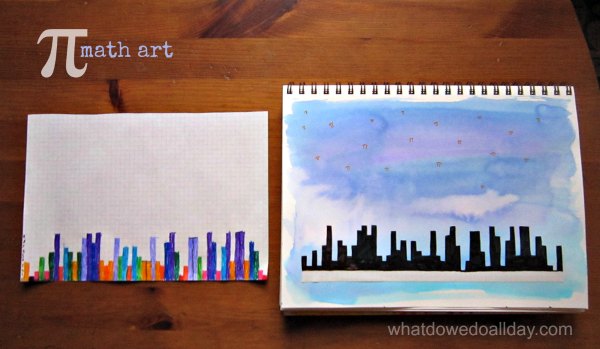 Pi is a number that has mystified people for centuries now, and it’s an interesting concept of mathematics. What do We Do All Day takes this number and builds an entire cityscape based on it! Each building in this cityscape represents a number of pi. It’s just amazing how math is so naturally artistic, isn’t it? 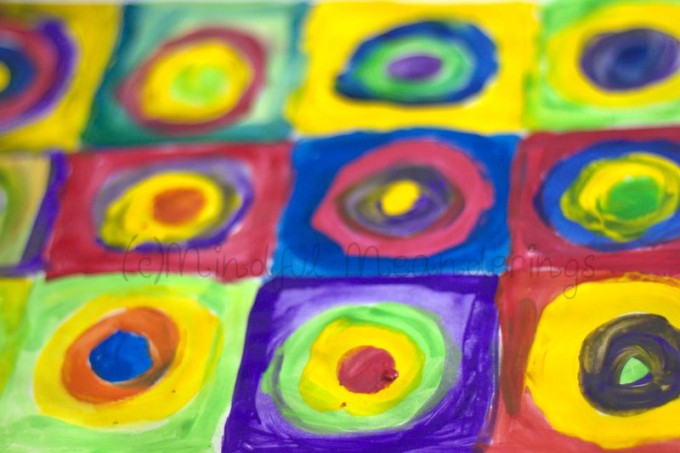 Wassily Kandinsky believed that every painting was made up of two elements – the point and the plane. Everything else was basically an extrapolation of these, and he used this principle widely in his art. He combined circles and squares to create some interesting patterns. Kids can learn many mathematical concepts from his art, such as fractions, geometry, area, perimeter and much more. 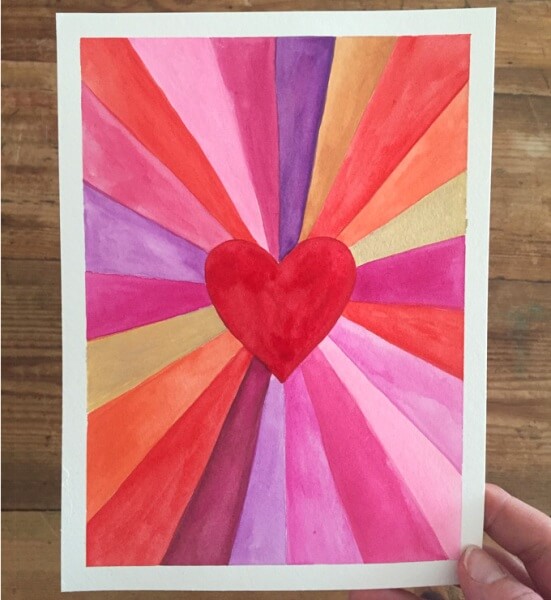 A ruler is the basic tool we use when we start learning about straight lines as well as measurements. Art Bar Blog takes this exercise a little further with this beautiful sunburst painting that is super easy in concept but which looks very impressive once done. It also helps kids understand concepts like perspective in art and how artists use it in their work. 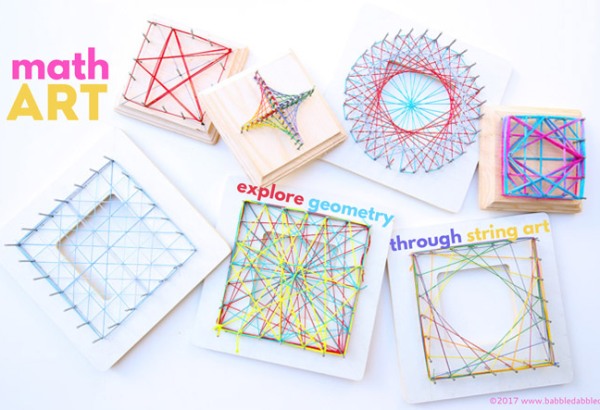 This project from Babble Dabble Do is something that can be adjusted to the age of the child. For younger children, you can use simple geometric shapes and let them string through these. Older kids can learn more about dividing the shapes and how fractions work. They can also make the stringing more intricate by placing more pins along the edges. 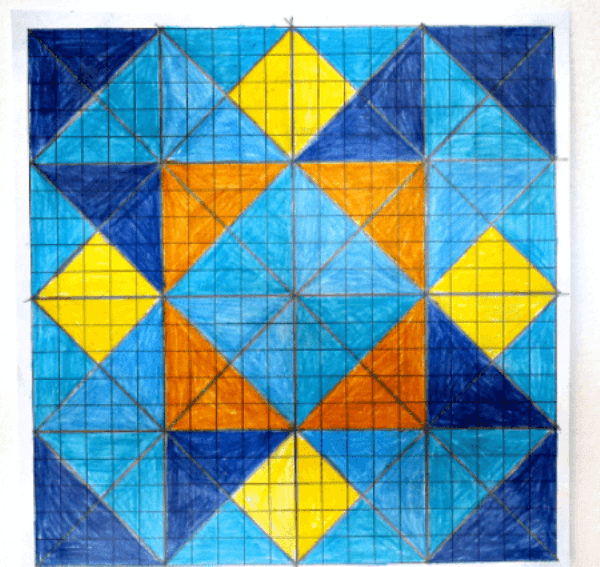 In our post on Islamic art projects for kids, we found that there are many elements of Islamic art that are based on mathematical principles like symmetry and patterns. Nurture Store gives us a glimpse into this kind of art by creating a simple but pretty art project using basic geometrical shapes and exhibiting different kinds of symmetry. 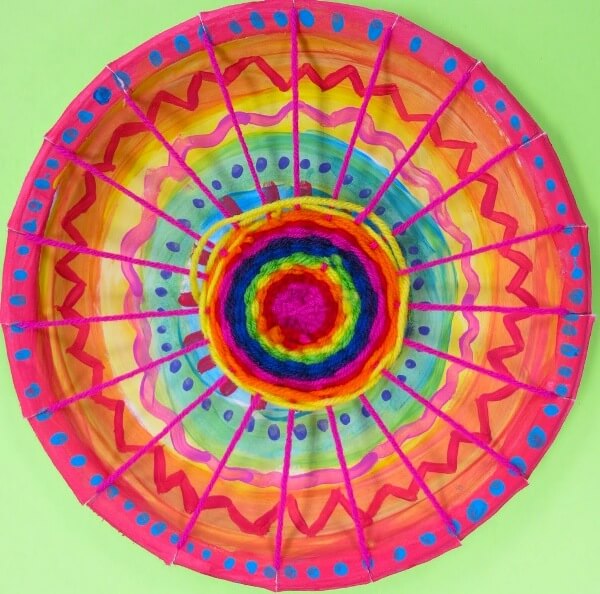 This project from Cassie Stephens is great for kids of all ages. Younger kids will enjoy the symmetry of a circle and how you can fit so many smaller circles inside it. Older kids can learn more about radii, diameters, arcs and segments. And at the end of it all, you get a lovely work of art! 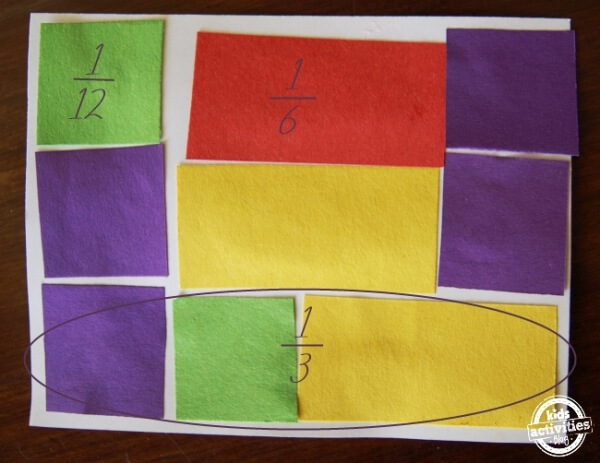 Paul Klee was an artist who featured a lot of Math in his work, including numbers and shapes. In fact, one of his most popular works is ‘Castle and Sun’, which is made up of several small shapes, put together beautifully to resemble a castle. Kids Activities Blog takes inspiration from this project to create a work of art that is based on fractions. This is an excellent way for children to understand how fractions form a whole. 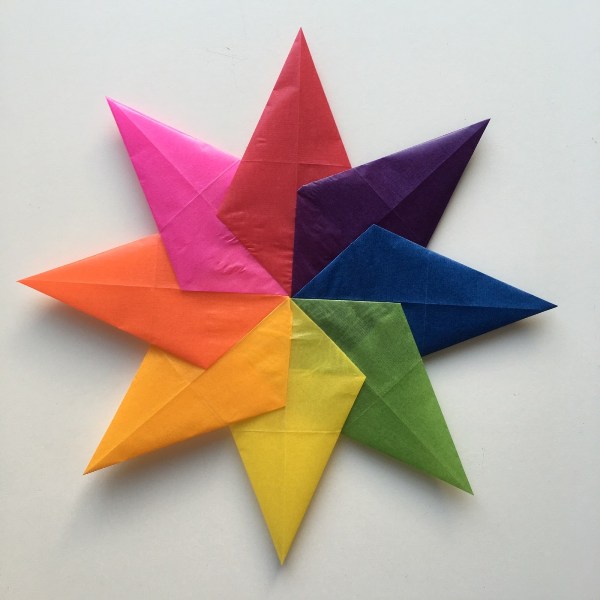 This Waldorf star project from A Beautiful Childhood is a great example for how beautiful math can be! The stars are made from kite paper, with individual parts then being assembled. The beauty is that even though they are made from different parts, when put together as a whole, they are perfectly symmetrical from any direction! 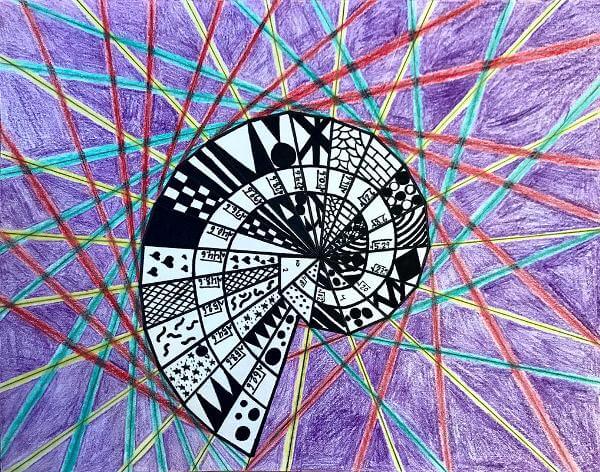 Yes, the beautiful structure you see in this picture is based completely on mathematics and numbers! This is the spiral of Theodorus, made from right triangles placed edge to edge so that the hypotenuse of the previous triangle makes the other side of the next triangle. This project from Models of Excellence also makes use of the Pythagoras Theorem to calculate the measurements of the right triangles. 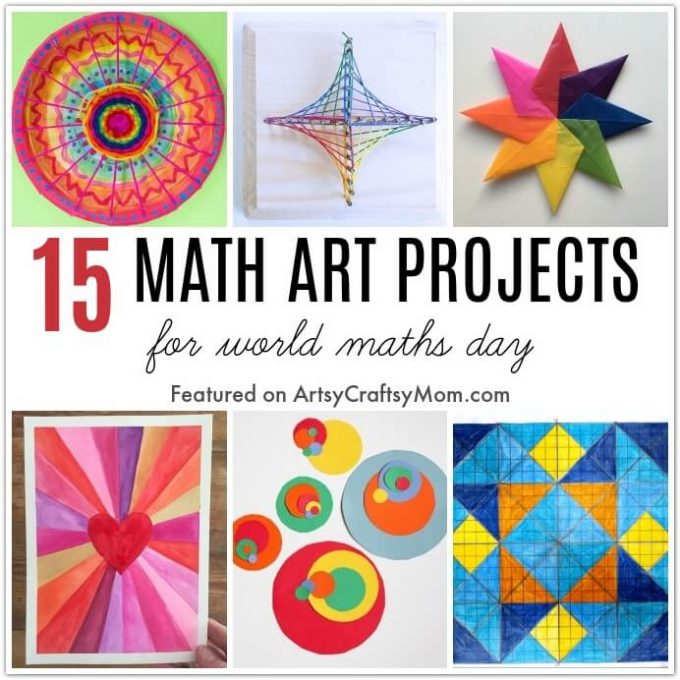 These Math Art Projects for kids should help them get over their fear for math and invoke a sense of awe and curiosity instead. You can take this further by looking at the works of some famous artists and pointing out the various mathematical concepts they’ve used. For instance, Leonardo da Vinci used the Golden Ratio in many of his paintings and Piet Mondrian made extensive use of grids. Even the seemingly haphazard work of Jackson Pollock seems to make mathematical sense. In time, you’ll be able to raise appreciators of both math and art! 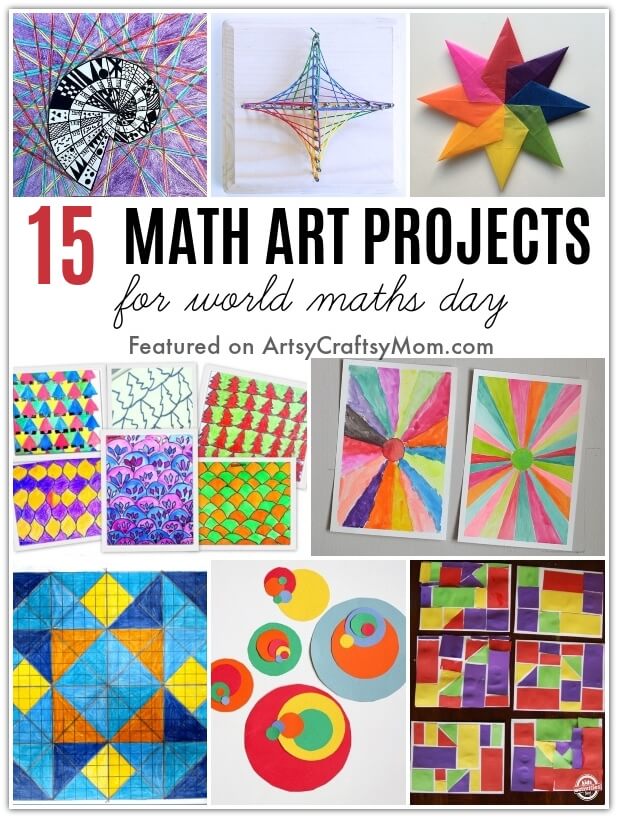