This Easter, have some fun making some Popsicle Stick Easter Crafts – Bunny, Chick and Sheep. Use them as bookmarks or decor or gift them to your friends!

The stores are flooded with chocolate bunnies, travel plans have been made and names have been registered for the Easter egg hunt. Now let’s add another element of fun to all this – with an Easter special puppet show!

And you know what the best thing is about this puppet show? There is no pre-written script! Yes, this is a completely open ended project for kids where they can make their own puppets and make up their own story. What’s more, once the show’s over, they can use these as bookmarks or decor!

This is the perfect activity for kids to develop their imagination. Who knows, this might just inspire them to come up with their own puppet ideas! 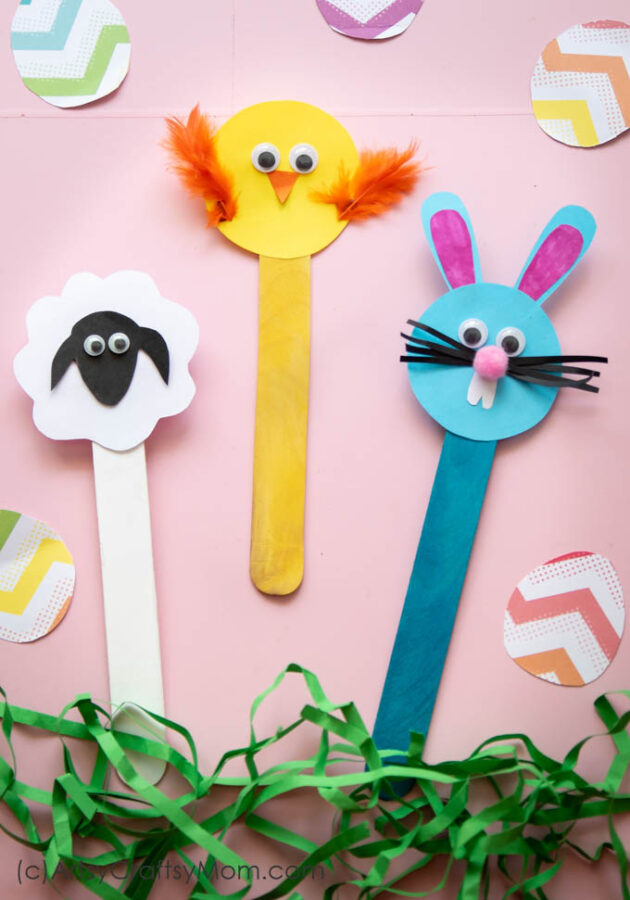 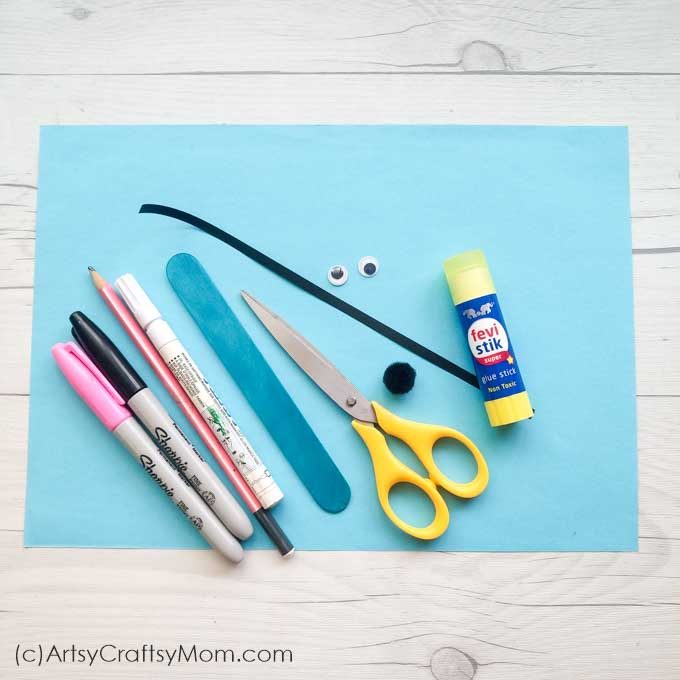 2. Cut out the bunny template pieces, a circle for the face and two ear shapes. Cut the black strip into four quarters. Make a slit in each one, but not all the way to the other end. 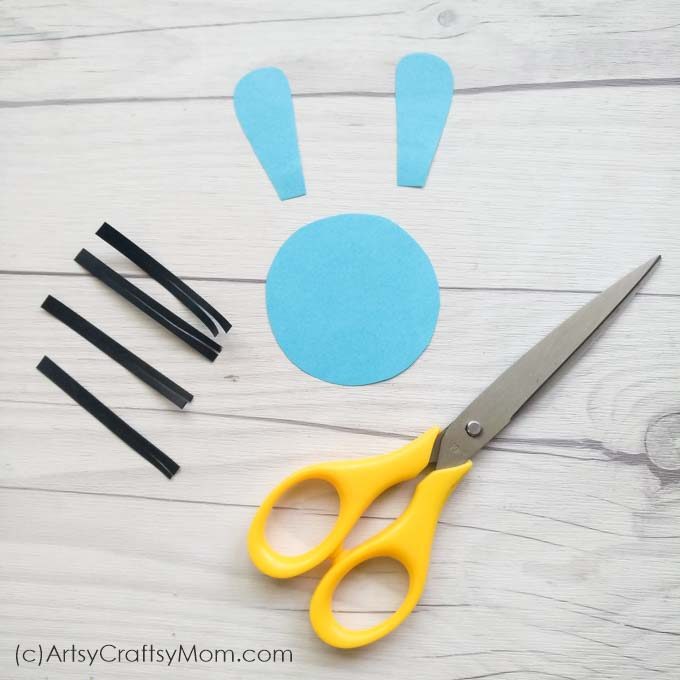 3. Stick the bunny ears to the back of the bunny head. 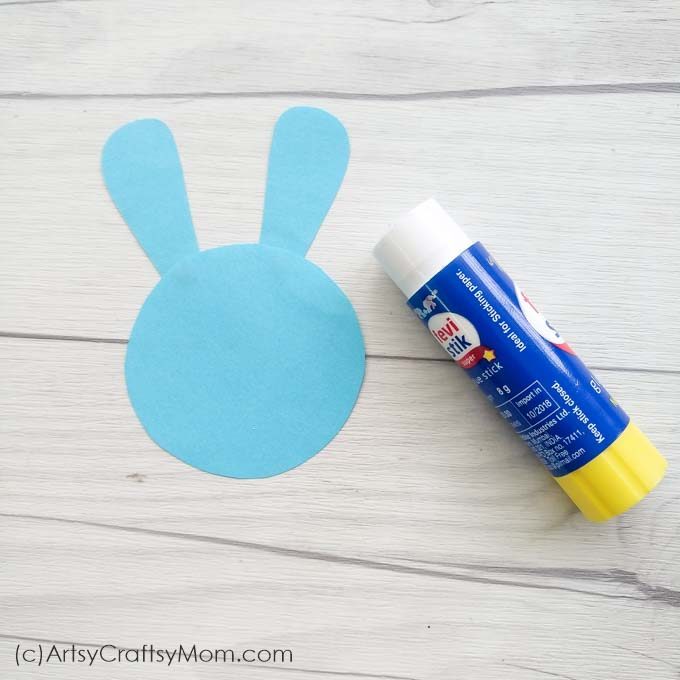 4. Stick the black strips in the center of the bunny’s face so that the split ends are facing outside, resembling whiskers. Glue a pom pom in the middle for the bunny nose. Add eyes in the appropriate places. 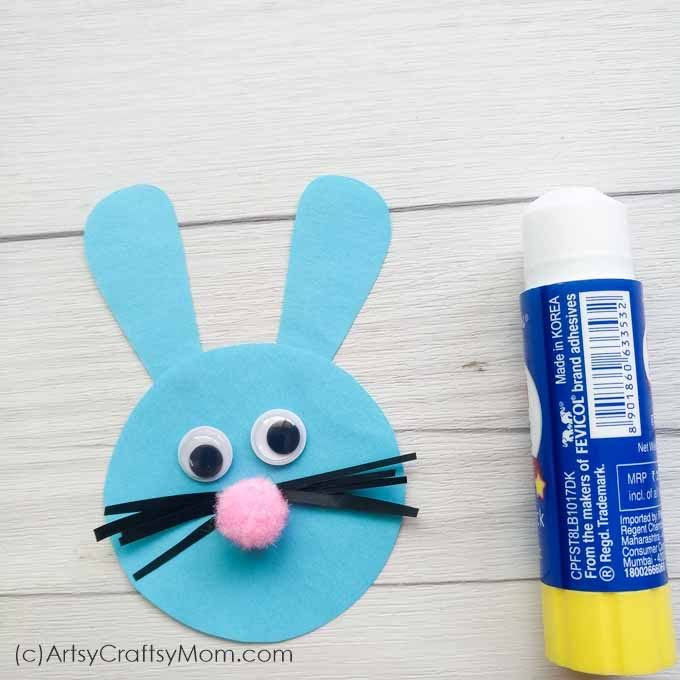 5. Use a pink marker to color inside the ears. Draw teeth with the help of a white chalk marker. 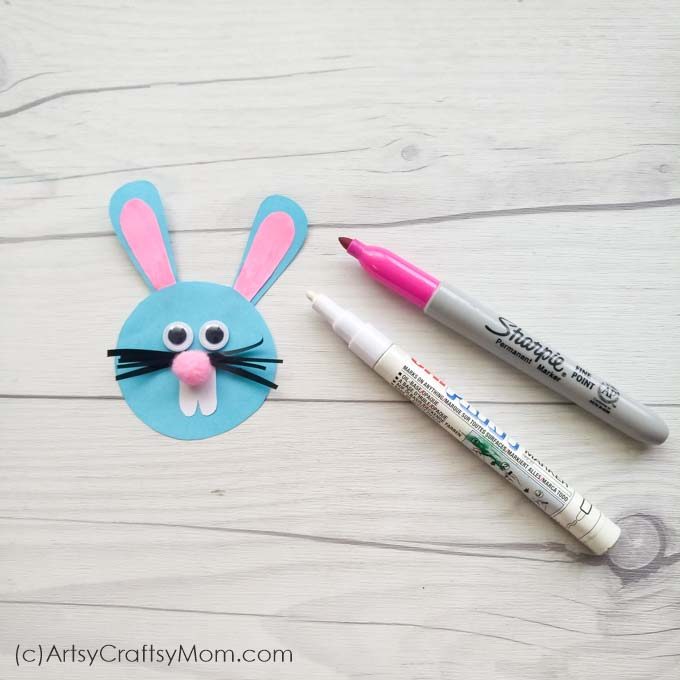 6. Paint a jumbo Popsicle stick the same shade as the bunny. Let it dry thoroughly. 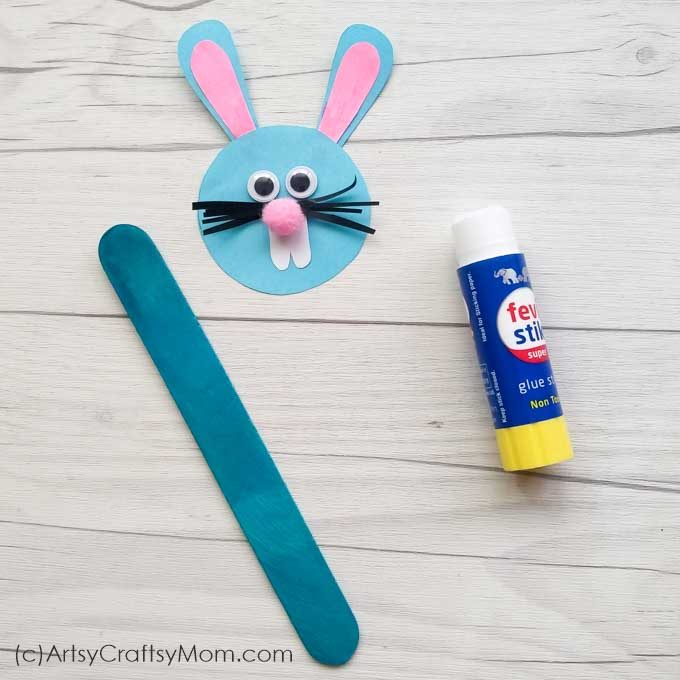 7. Attach the bunny head on the Popsicle stick with glue. 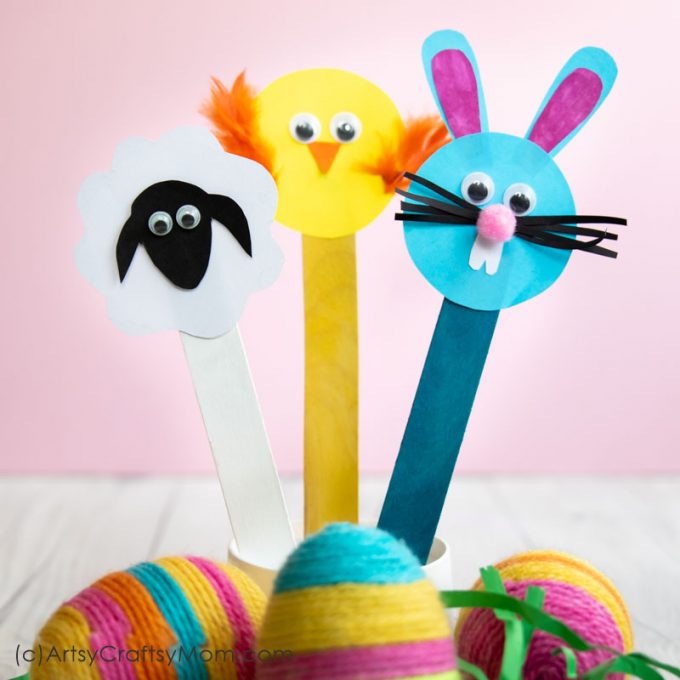 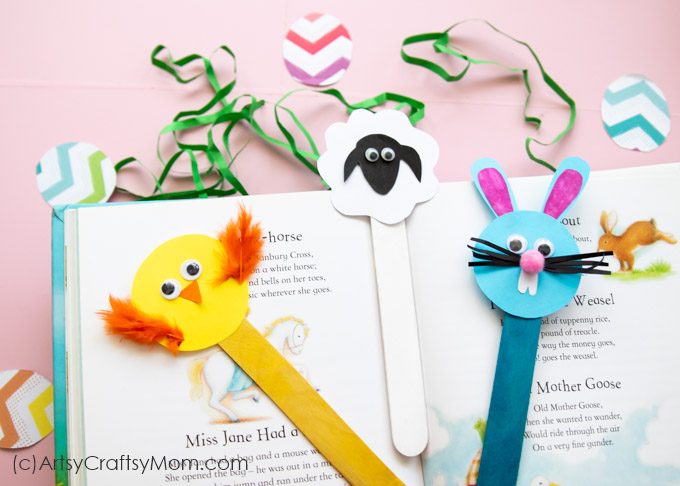 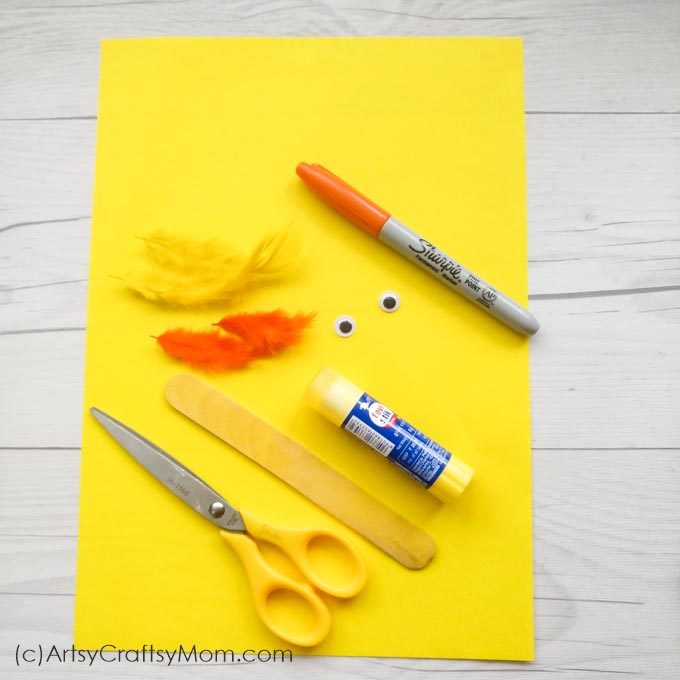 2. Cut a circle out of the yellow craft paper. 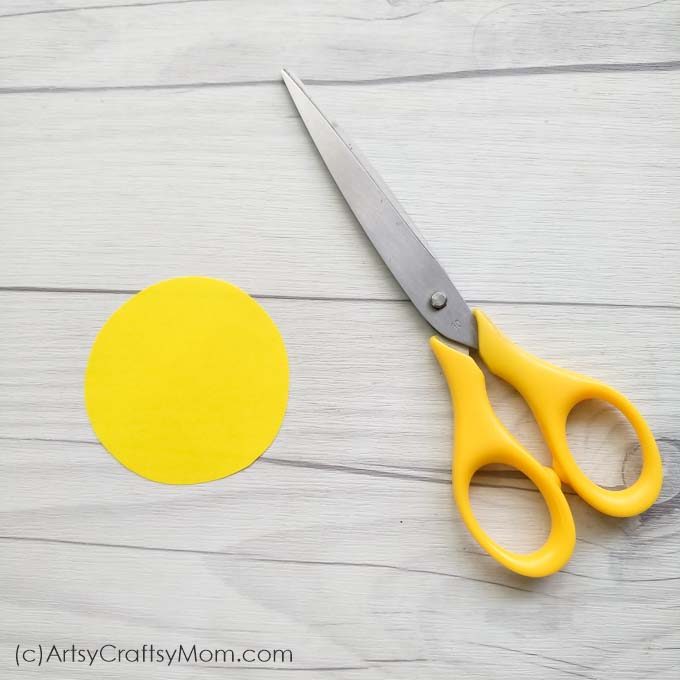 3. Use a sharpie to draw and color an orange triangle facing downward, to resemble a beak. Stick the googly eyes in the middle of the circle. 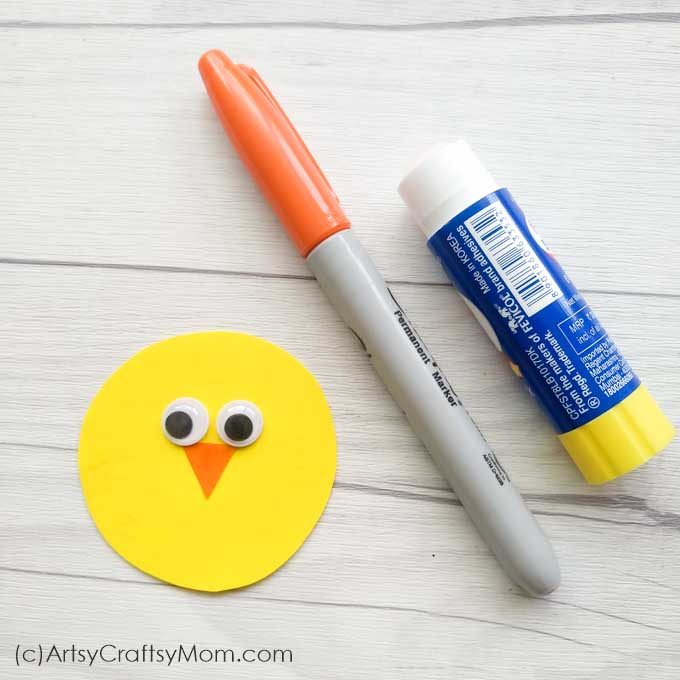 4. Stick on craft feathers on either side of the chick to make wings. 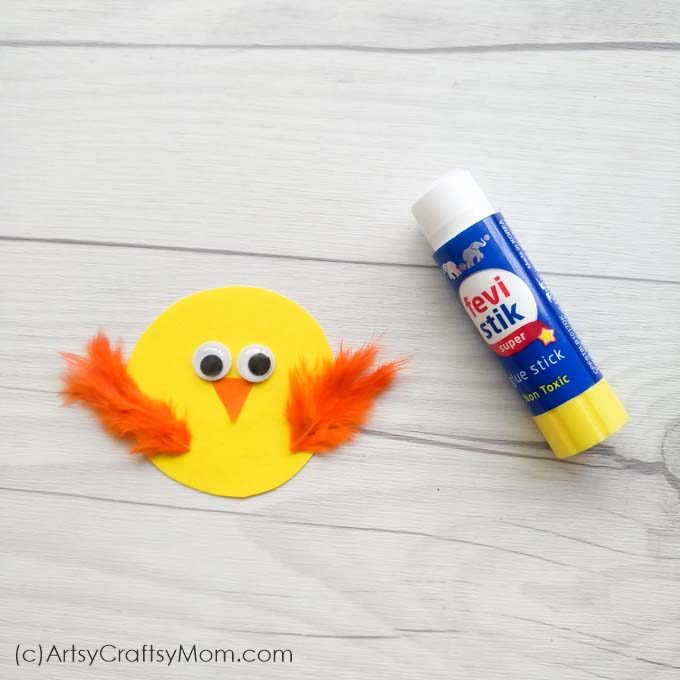 5. Stick another feather on the top of the chick, sticking to the back of the head. 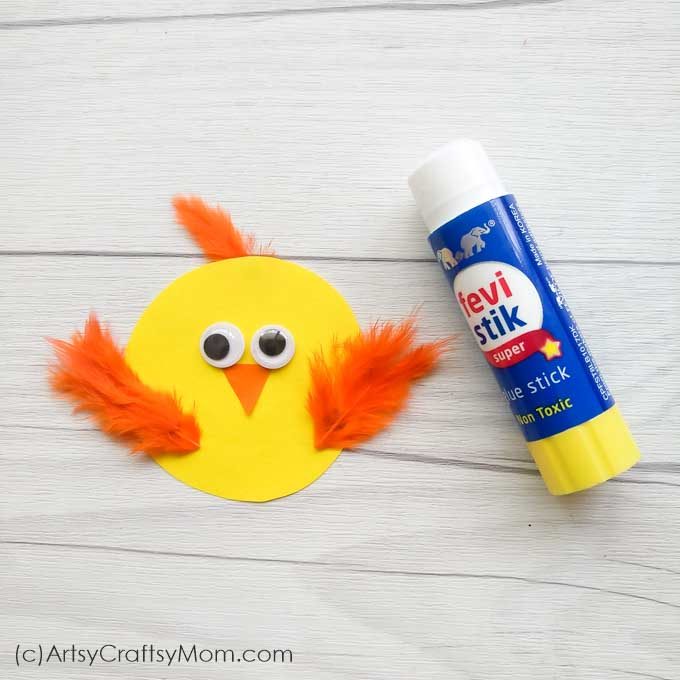 6. Paint a jumbo Popsicle stick the same color as the chick. Let it dry thoroughly. 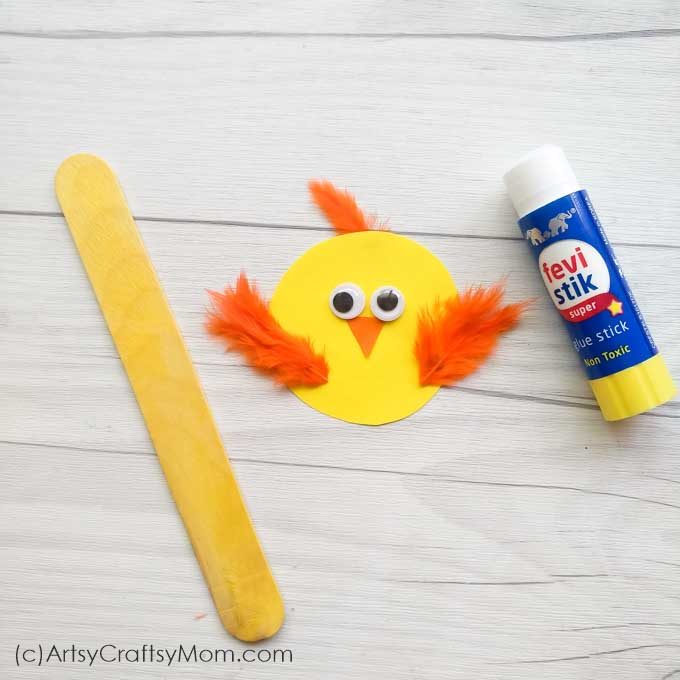 7. Once the stick is dry, stick the chick on top of it. 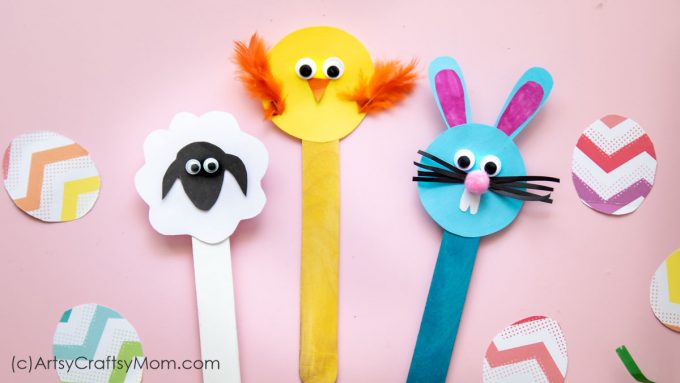 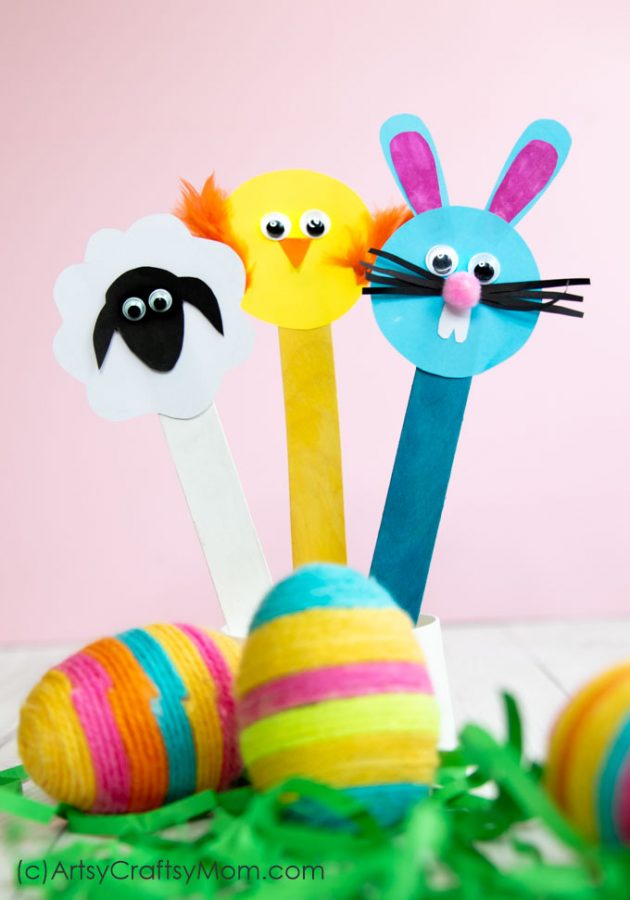 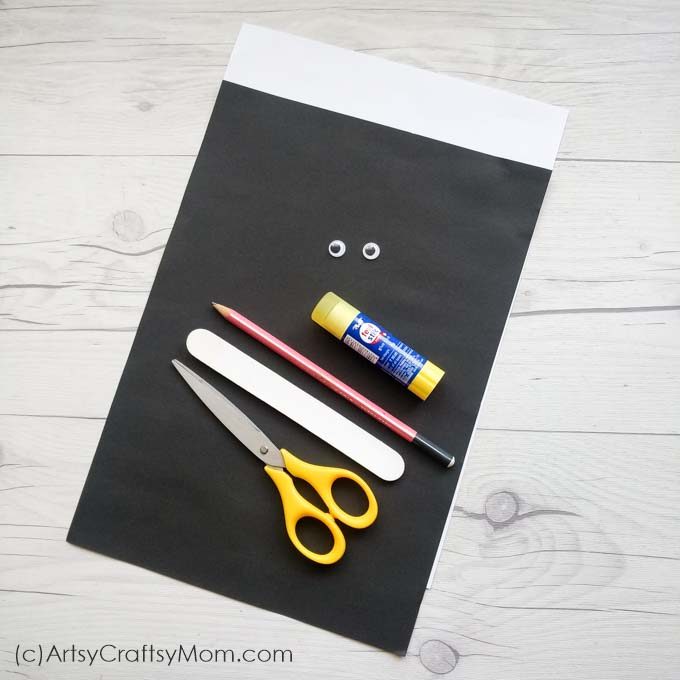 2. Cut out the template pieces. A cloud shape from white paper for the sheep’s body and the head from the black craft paper. 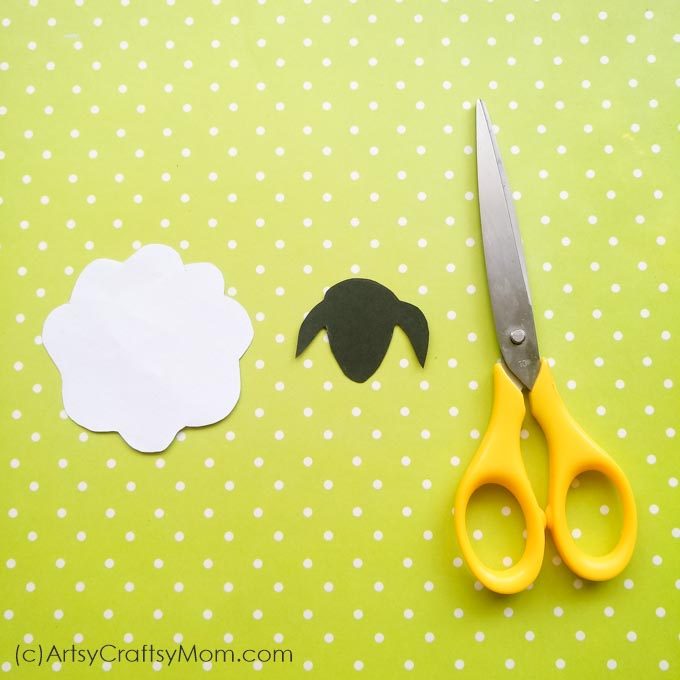 3. Stick the head in the middle of the sheep body. Stick googly eyes on the sheep’s face. 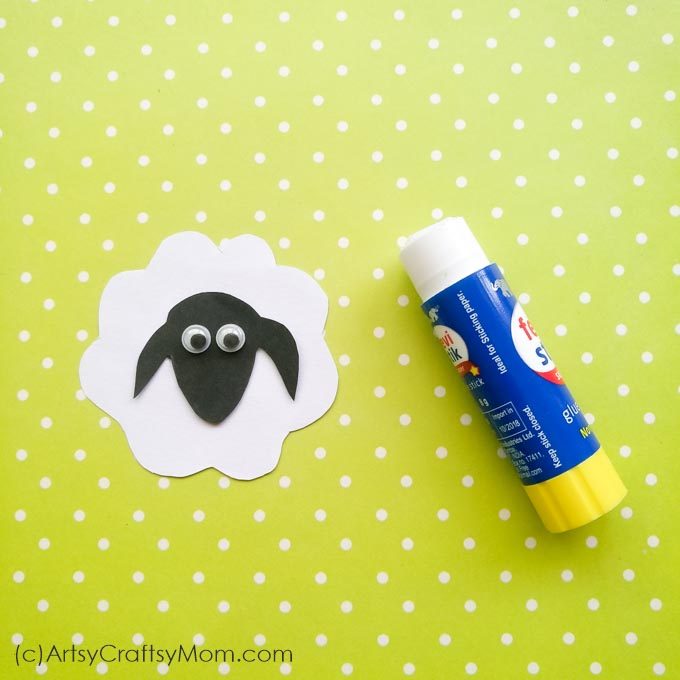 4. Stick the sheep head on top of the Popsicle stick with glue. 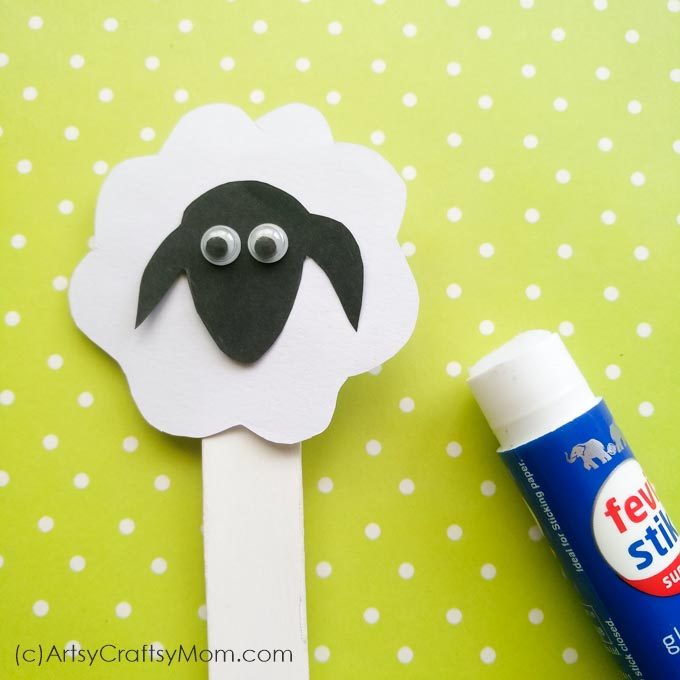 5. All your Popsicle stick Easter crafts are ready! 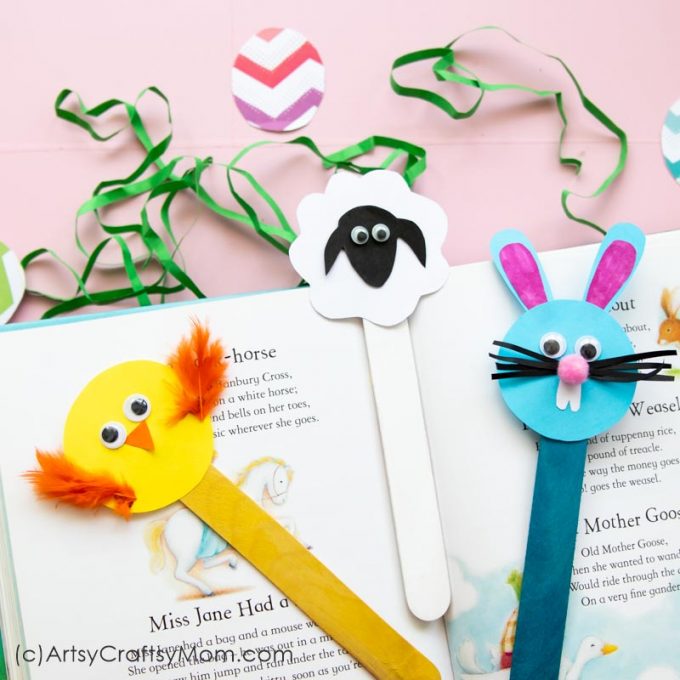 These Popsicle stick Easter crafts will hardly take a few minutes a piece – it’s that easy! If the kids are up to making a puppet show with some more colorful characters, do check out our Popsicle stick Unicorn, Popsicle stick elf and Popsicle stick Leprechauns. This should make for quite an interesting show! 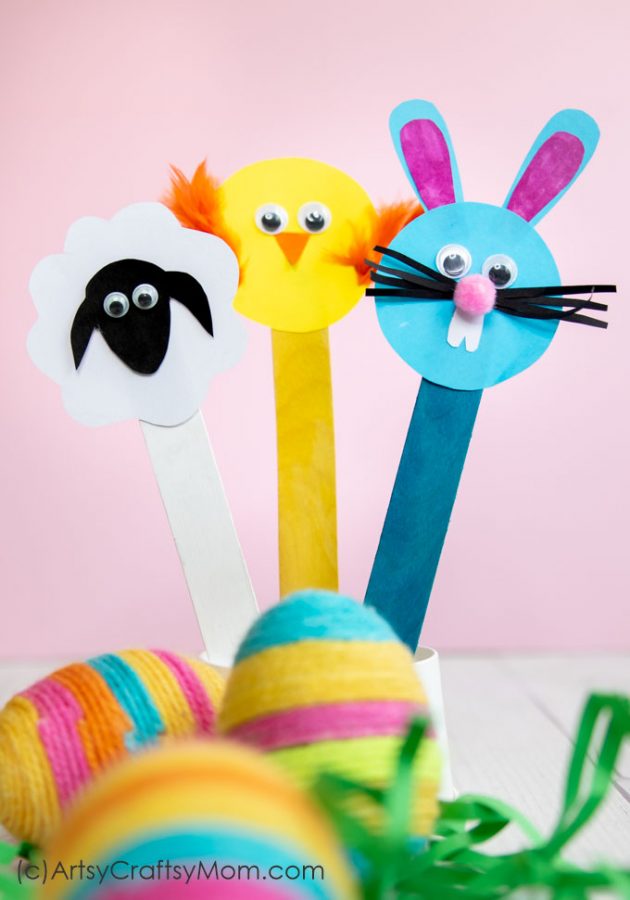 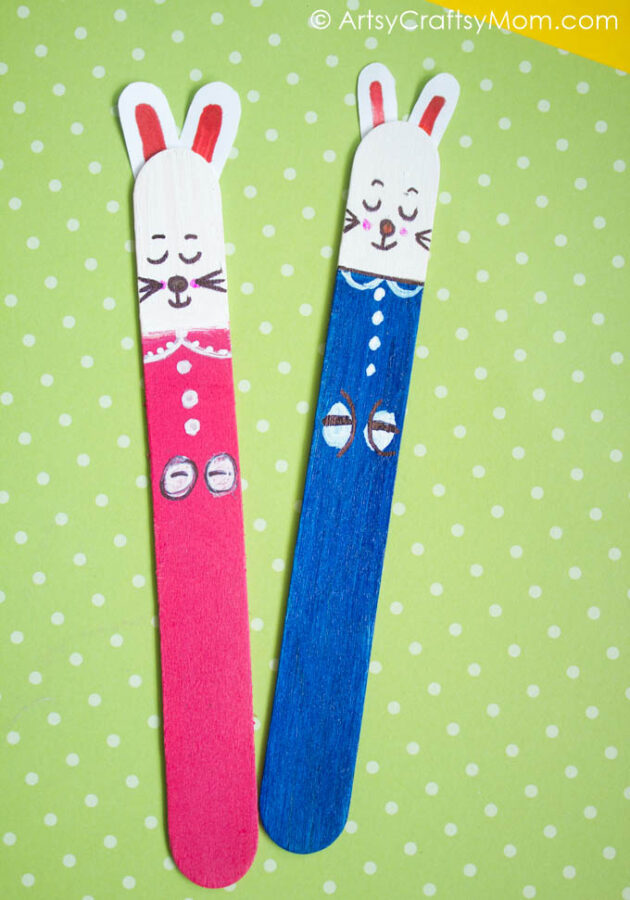 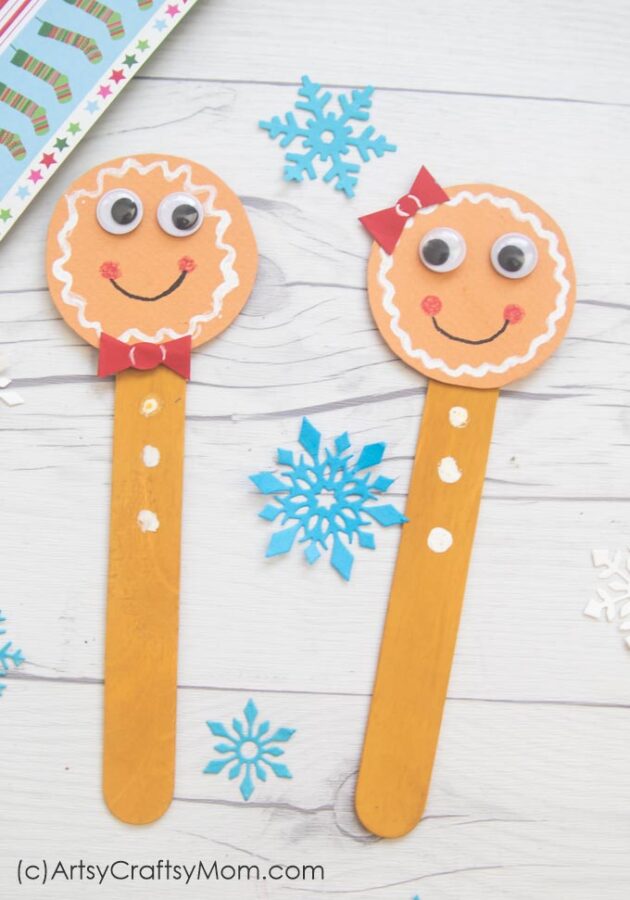 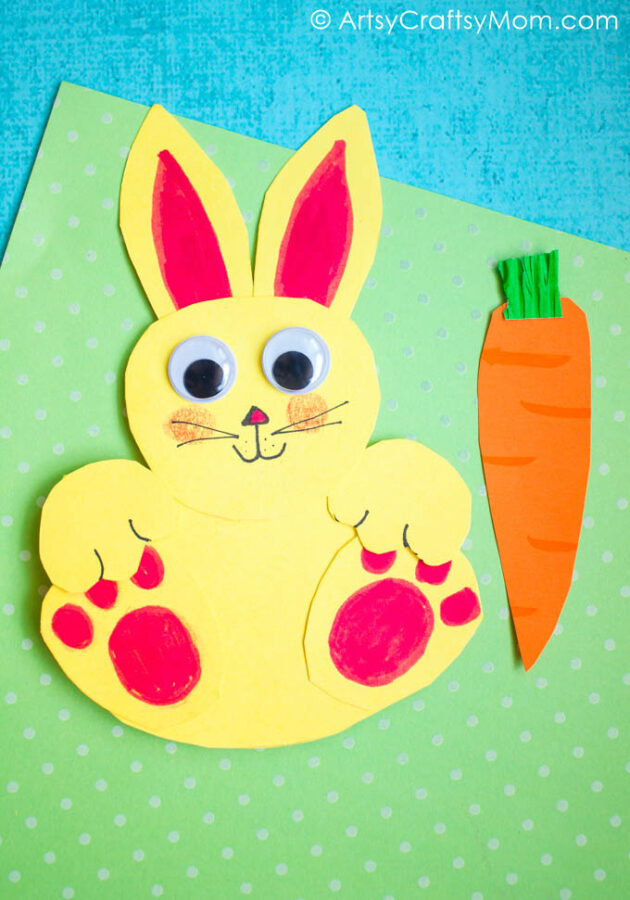 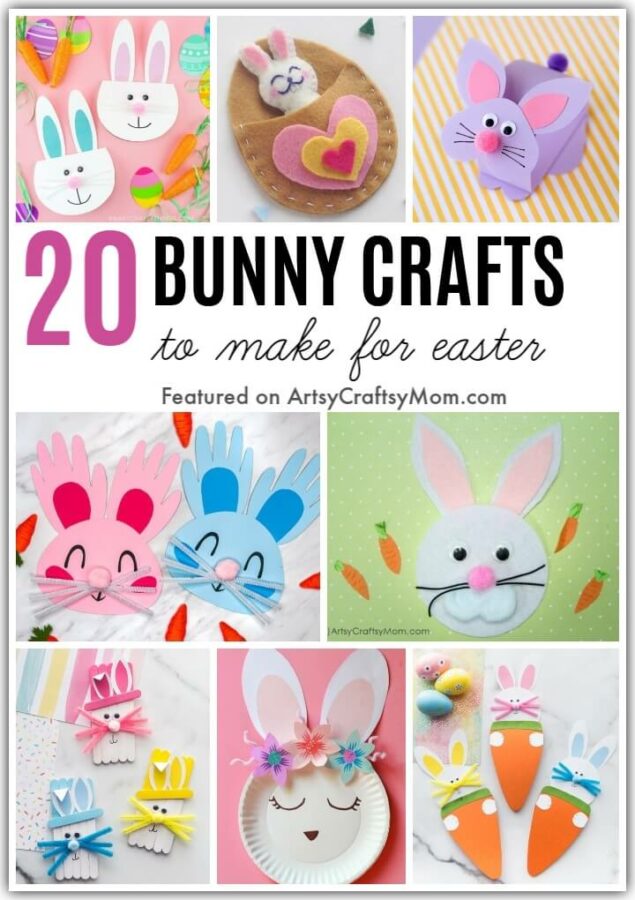