We had planned to start for Ranthambore National Park Sawai Madhopur Rajasthan India on 23rd early morning.. but after the marriage celebs we were really too lazy to get up n go.. Our alarm did not ring and we woke up with a start at 8.30 and all hell broke loose.. Bags had to be packed.. a sleepy 5 year old had to be woken up and gotten ready.. There was a gorgeous bathing tub at mansingh palace and Lil p insisted on having a leisurely bath in it. .. ok I digress. The point is that we were ready only by 12.30 and any plans of attending a safari on 23rd were dashed.. the road was also pathetic and we reached Ranthambore only at 6.30 pm.. We decided to rest that evening.. went off to sleep early and Hubby woke up at 5 am on 24th to stand in Q at the reserve gate. We all meanwhile got ready and reached by 7AM. Safari was to start at 8.. To say it was cold would be an understatement. Lilp was wearing  2 layer thermals, socks, shoes, a sweater  a muffler and a woolen cap. All of us were wrapped in layers too. some people turned up with blankets. We chose an open jeep canter that seated 15 ppl.. They have a computerized system of allocating a zone.. I think the safari is split over 4 zones [ not sure abt this] and only 15 jeeps + canters are allowed at any time. We got the Zone 1 .. Zone 3 and 4 are more popular or so we read on the web. 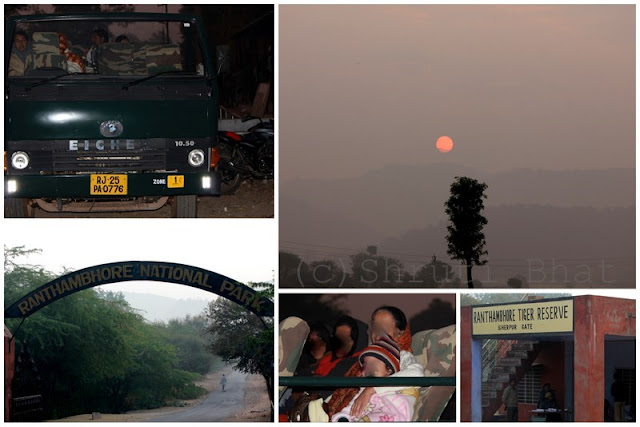 There had been zero tiger sightings for the past 5 days in all zones… and we were also told that there was just  25% chance that we would sight a tiger.. mainly because it was so cold and there was water everywhere so the tigers did not venture out much.. The 8 am ride got delayed to 8.30 because the other people who had booked, had to be picked up or turned up late and we watched in sadness as each jeep entered before us.. The popular belief is that there are more chances of a tiger sighting for the early jeeps.. We kept joking that at this rate we wouldn’t even see a single deer.. Finally after the ranger checked each person’s Id proof.. and the 2 foreigners who missed getting their passports came back.. we finally entered the gates at 8.20 AM.. 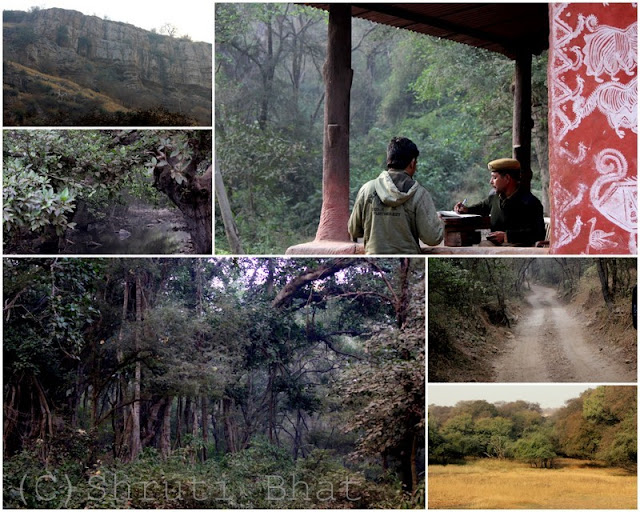 The ride is really rough.. If you are a person with back problems or are pregnant – DO NOT GO. [ just to clarify – I’m neither] . Just looking at the wilderness, we were astounded. The tiger could be calmly sitting in the bushes 2 feet away and we would 100% not be able to spot it. Anyway.. everyone was keenly looking into the horizon trying to spot the elusive tiger / leopard or atleast a deer.. something .. ANYTHING..  🙁

One by one as the sun rays came out we could spot some small animals and birds .. far away. 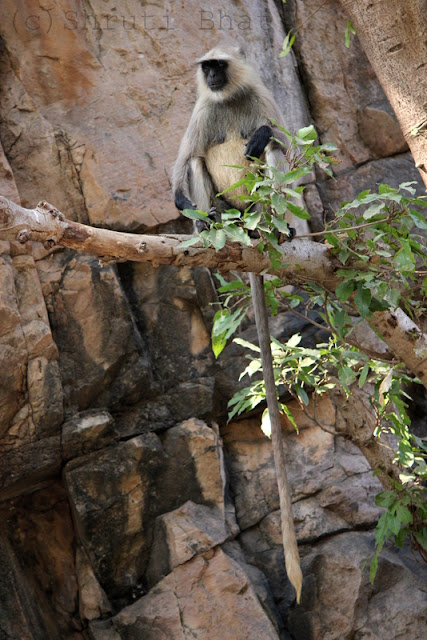 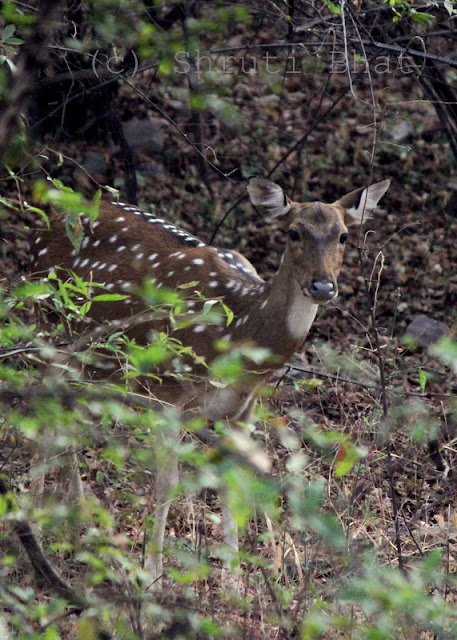 About an hour into the ride and still no animals.. we saw a flock(?) of peacocks and peahens .. 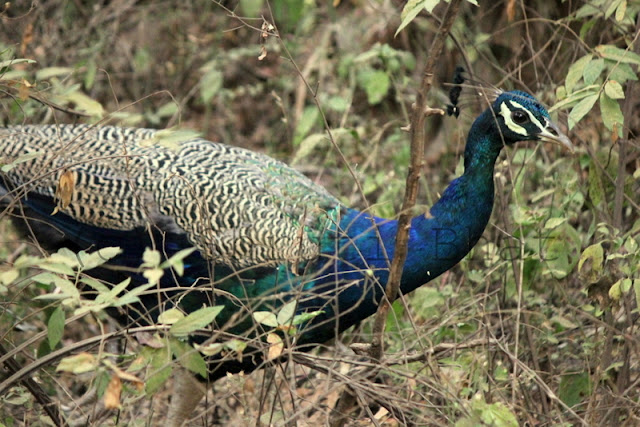 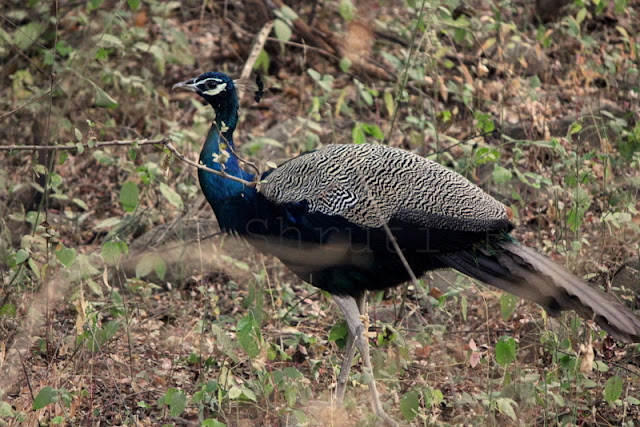 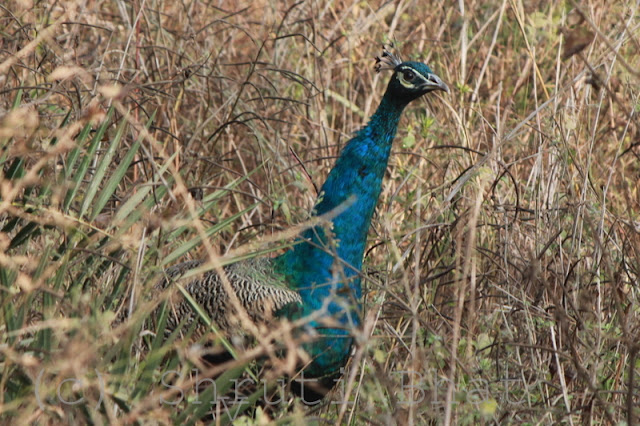 This drew many excited shouts from the foreigners.. By now we were so used to seeing peacocks everywhere in rajasthan that Lil p answered ” I have already seen it” and refused to even look out of the jeep.. We also saw many of the safari jeeps n canters return with disappointed results. No Tigers, they all sighed.. 1.5 hrs into the ride and kids had started getting edgy .. we saw an eagle sitting far away.. an owl’s nest with 3 sleepy faces staring at us.. lots of birds.. all really really far away.. Lil P dozed off and was a pain (!!) to manage in that rumbling tumbling jeep.We saw a family of sambar deer and this cute lil fella with his mommy at the water front..

We stopped at a place where the rangers stayed for the night (deep inside zone 1) for open air toilets.. most people were scared and sat put in the canters waiting for the driver to return.. here we saw this fearless fella again. We had met him at Bharathpur before..The Rufus Tree Pie is a long-tailed chestnut-brown bird, with sooty head and neck. It has a black-tipped tail and greyish-white wing patches. Our guide told us that these birds are the tigers best friends.. after a full meal the tiger opens its jaws for this bird.. and the tree pie picks out all the meat stuck in its teeth. We carried ragi for this bird and it ate right out of our palms..Lil p also woke up in time to feed the bird 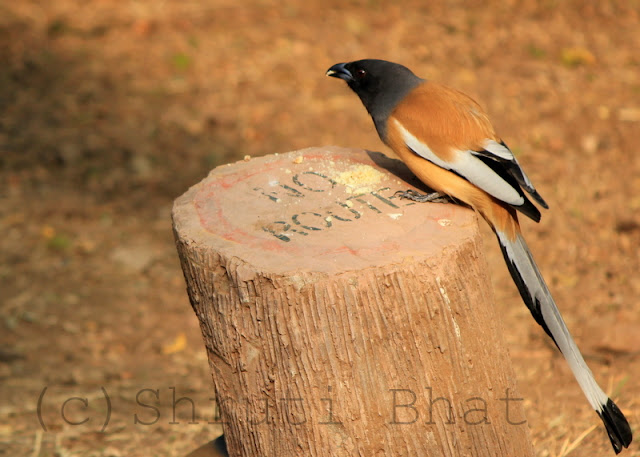 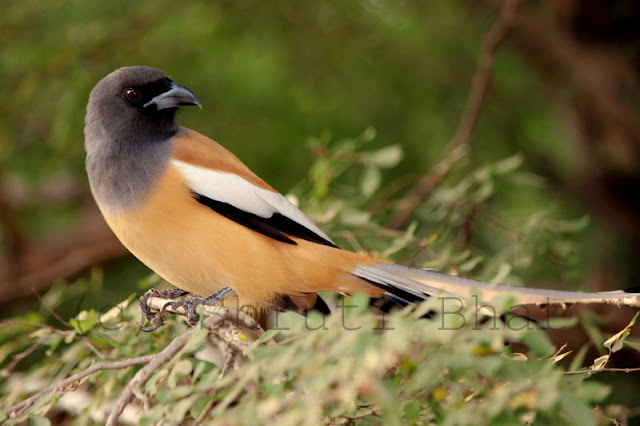 From here it was time to return back… with heavy hearts we went back the same way we had come in.. rt at the zone 1 entry ( abt 3 kms from main gate) we saw a mongoose .. 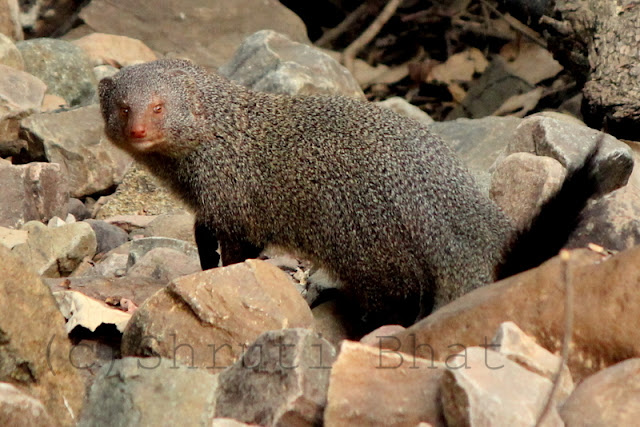 At the gate.. the ranger said that one of the earlier jeeps thought they saw a tiger near the watering hole and that we should maybe go and check.. by now 2 hrs were up and all the earlier safari jeeps were already out of the gate.. there were 2 other jeeps from zone 2 &  3 who decided to accompany us back into zone 1 and investigate [ remember the watering hole where we spotted the sambar? ] .. Normally there are warning calls by langurs & deer which signal a tiger nearby.. but no such luck.. We took a different (rougher) path and then suddenly we spotted him :).. A magnificent male tiger named T-24 lazing around in the stream..

Hearing all the commotion he slowly walked out and sauntered across the other end.. 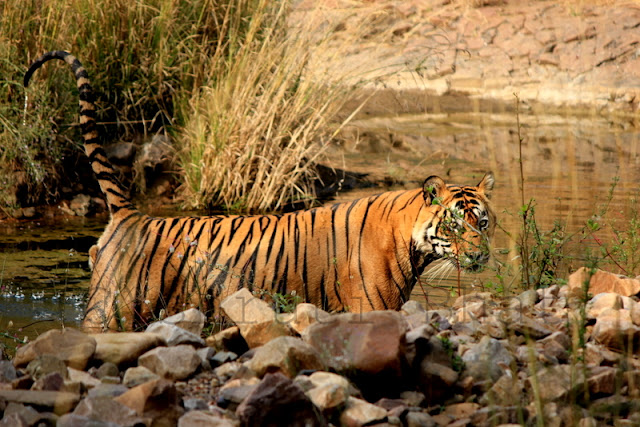 Our jeeps followed.. we found him resting rt next to the road 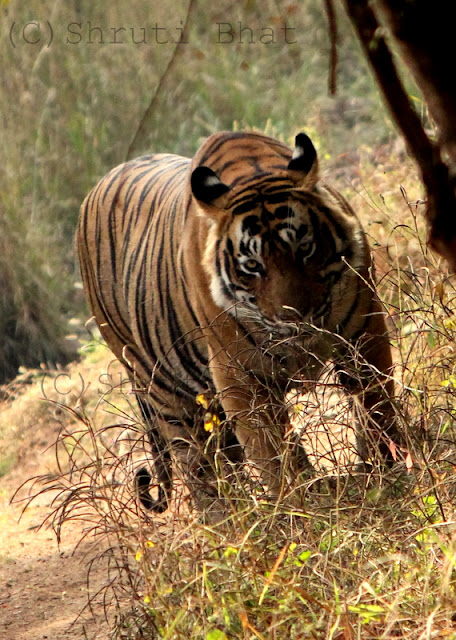 and we all watched as he moved in absolute royalty.. he was nearly 9 feet wide, about 4.5 years old  .. and his coat shone brilliantly in the sunshine.. 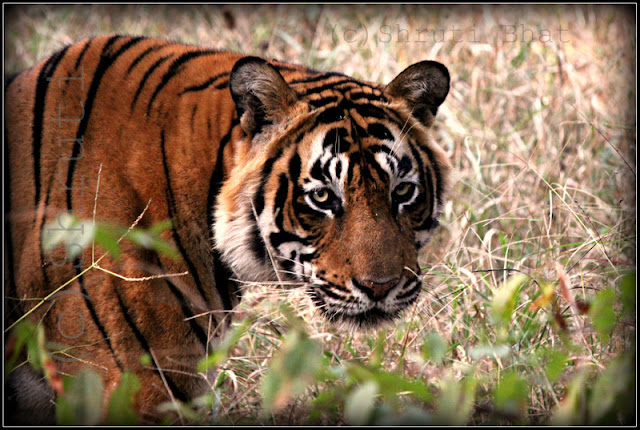 He disappeared as quietly as he arrived.. quickly hiding into the dense foliage.. and we returned with memories for a lifetime.. just counting our blessings at this rare sight and thanking our luck for the various delays which had earlier annoyed us.. cos if we had left Agra on time, we would have taken the safari the earlier evening – No tiger.. and if the foreigners had not forgotten their passports we would have been the first jeep in and out.. and again no tiger.. Everyone was just dazed and we pinched ourselves to be sure this was not a dream.
We reached our rooms and started for Jaipur,  our next stop.