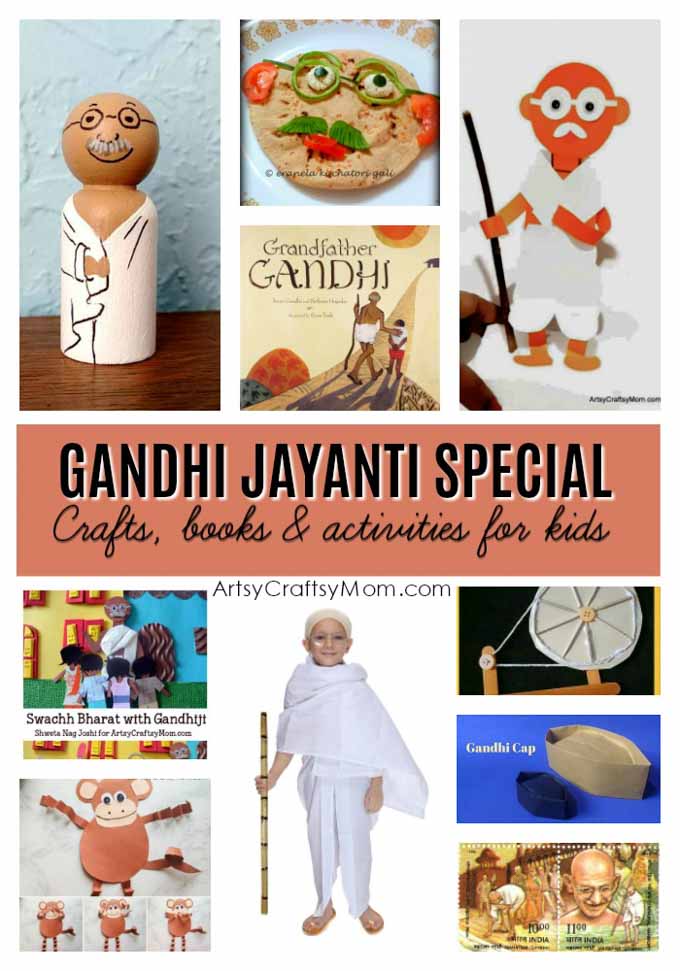 What is meant by Gandhi Jayanti?

Gandhi Jayanti marks the birth anniversary of Mohandas Karamchand Gandhi who is popularly known as Mahatma Gandhi. He was born on October 2, 1869, at Porbandar, Gujarat. The day is celebrated on October 2 every year and is officially a national holiday in India.

What do we do on Gandhi Jayanti?

Gandhi Jayanti is marked by prayer services and tributes all over India, including at Gandhi’s memorial Raj Ghat in New Delhi where he was cremated.  Across the country, prayers and meditation are offered at many ashrams. Try connecting with your local prayer group.

Narsi Mehta’s Vaishnava Jana To Tene Kahiye Je (Call only that person a Vaishnava or a godlike person)  was one of Gandhiji’s favorite songs and a source of profound inspiration to him through good times and bad. They were a regular feature of his prayer meetings which usually featured a variety of hymns. In 1982, the song’s usage in the movie Gandhi popularised the song among a whole new generation of listeners both in India and abroad.

Gandhiji’s version, which he and his fellow satyagrahis chanted during the Dandi March of 1930 runs:

The famed Indian leader Mohandas Gandhi is strongly associated with the minimalist style of dress he adopted. In fact, when he was invited to visit the king and queen of England, he arrived, true to his style, sporting just a loincloth and shawl. When asked if he was wearing enough clothes, he wittily responded that “the King has on enough for both of us!” With a generous amount of fabric and a few accessories, you can create a Gandhi costume at home.
You’ll Need –

5 Quotes By Mahatma Gandhi To Inspire The Leader Within You

Gandhi Jayanti 2022: Mahatma Gandhi was a strong advocate of the principles of Satya (Truth) and Ahimsa (Non-violence), and played a monumental role in India’s freedom struggle.
Today, the power of Gandhi’s words still inspires us to change the world by changing ourselves. To inspire the readers in your life, I’ve created a set of printable bookmarks with quotes from Mahatma Gandhi. Available for free to our Club ArtsyCraftsy paid members. Available to print in color & b/w. 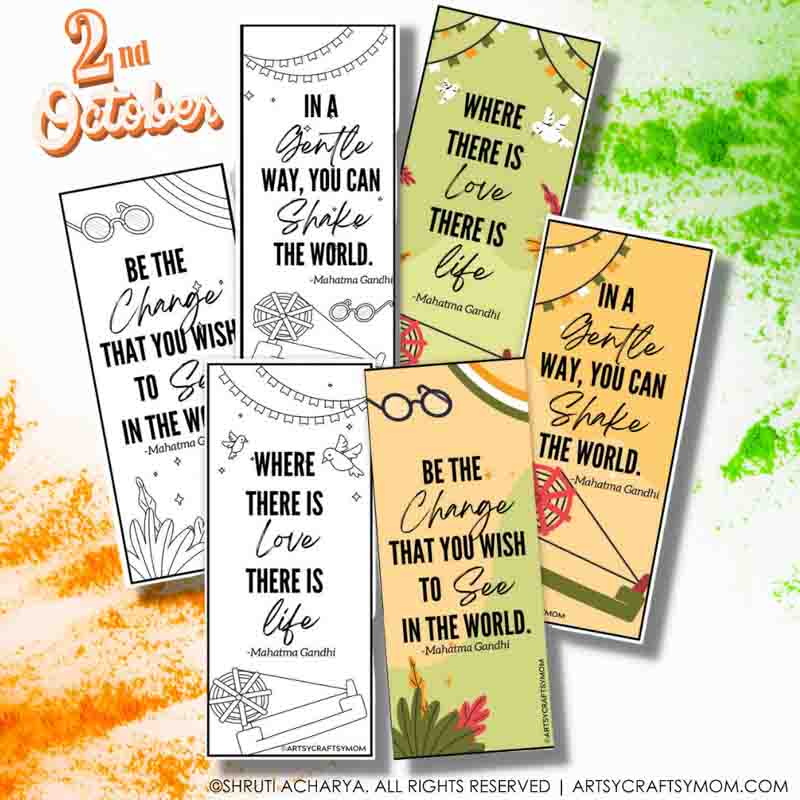 Gandhiji was born more than a century ago but his words and wisdom are still current and compelling! He still has the world mesmerized!  Films, plays, books, and stories bring him regularly into our lives. The UN has declared his birthday, 2nd October, the International Day for Non-Violence. But how do we make his life relevant to children of today? How do we tell his inspiring story so that he isn’t just part of a history lesson? Here are some books and resources about Mahatma Gandhi & Freedom Struggle to inspire children. 32 Best Children’s Independence Day Books from India

How to Draw Mahatma Gandhi

Gandhi Ji’s face is an iconic face and can be found in different places such as banknotes. You and your kids can learn to draw Gandhi Ji’s face through this video tutorial. Use your newly learned skills to decorate bulletin boards or make a patriotic drawing of Gandhi Ji’s face on that.


Surprise your Child with a Mahatma Gandhi paratha 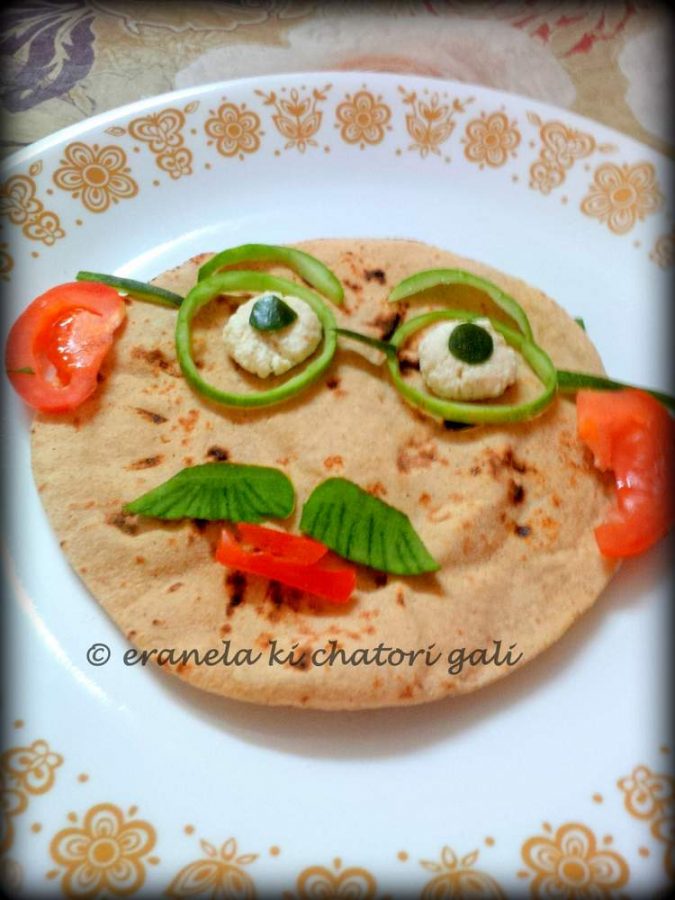 Era made a Gandhi paratha using cucumber for glasses, mustache, and eye pupils. Tomato for ears and for lips. Eyeballs were made using paneer. Isn’t this fabulous? 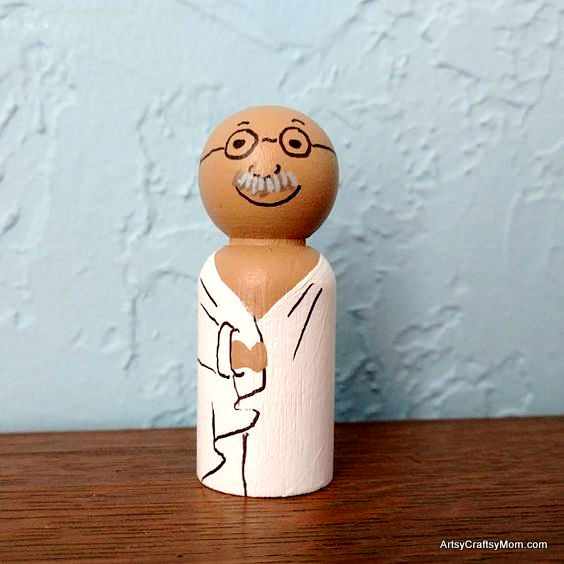 Gandhi led India to independence and inspired movements for civil rights and freedom across the world. This Peg Doll Gandhi can sit on your desk, windowsill, stay in your purse or pocket when you need a reminder of non-violence and forgiveness. Via PocketPeacemakers 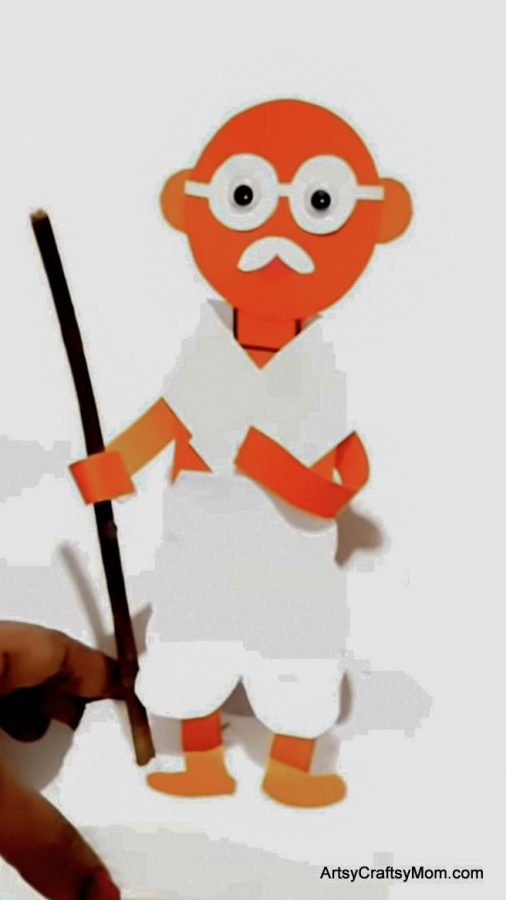 Younger kids can stick it onto paper to make a Charaka 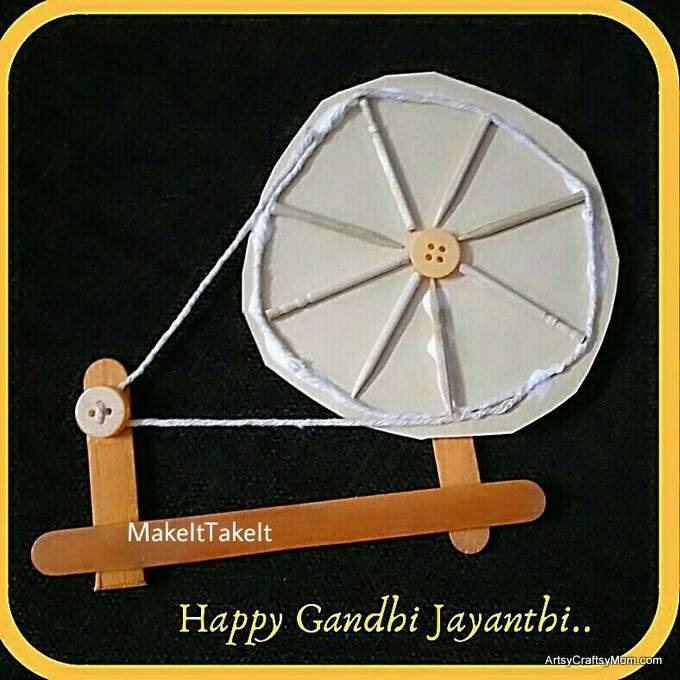 And older kids can try building a 3D model

It’s the perfect time to learn about Gandhiji’s monkeys with this cute craft! Gandhi Jayanti Monkey craft – See no Evil, Hear no Evil & Talk no Evil 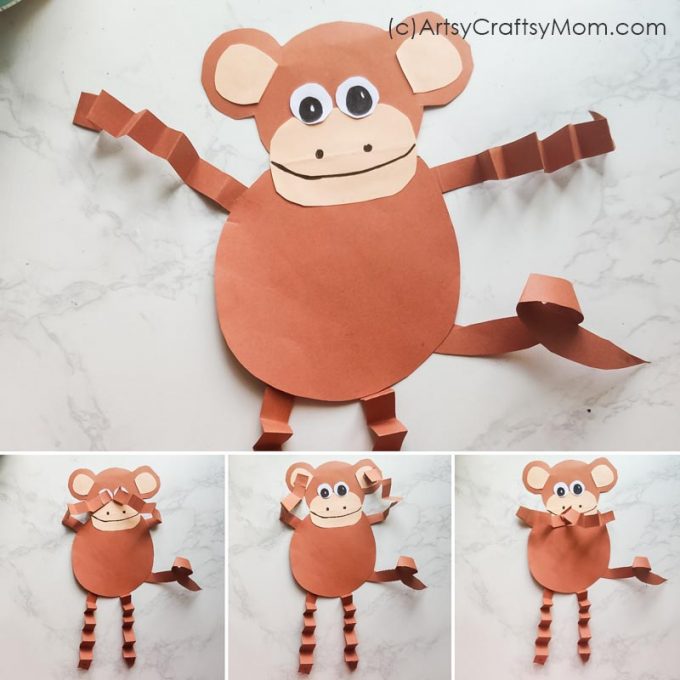 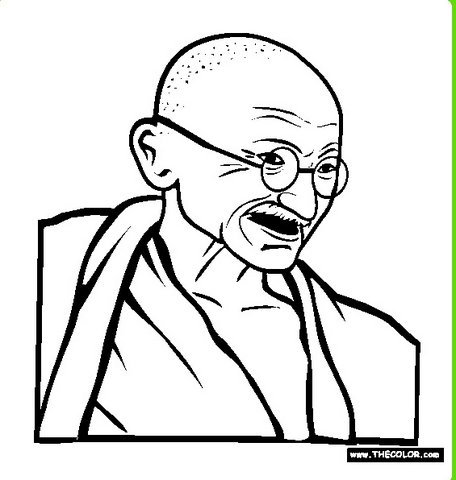 The Color.com has some online coloring pages that are perfect to explore on Gandhi Jayanti.

Explore the life of MK Gandhi via interesting Postal Stamps

Did you know? The 10 Rupees Postage stamp depicting Mahatma Gandhi, issued by India in 1948, is one of India’s most famous stamps. On 15 August 1948, on the occasion of the first anniversary of India’s Independence Day, Gandhi was honored as the first Indian to be depicted on stamps of India

There are 300 postages that have been released featuring Gandhiji in the countries of the World, other than India. 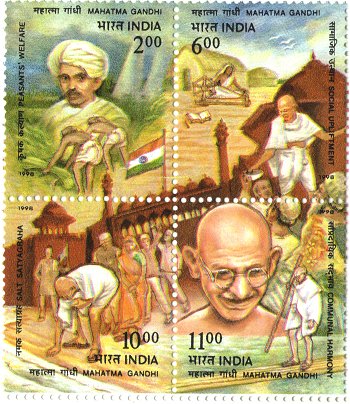 Here is a collection of stamps depicting Mohandas K. Gandhi, from the blog Kamat’s Potpourri 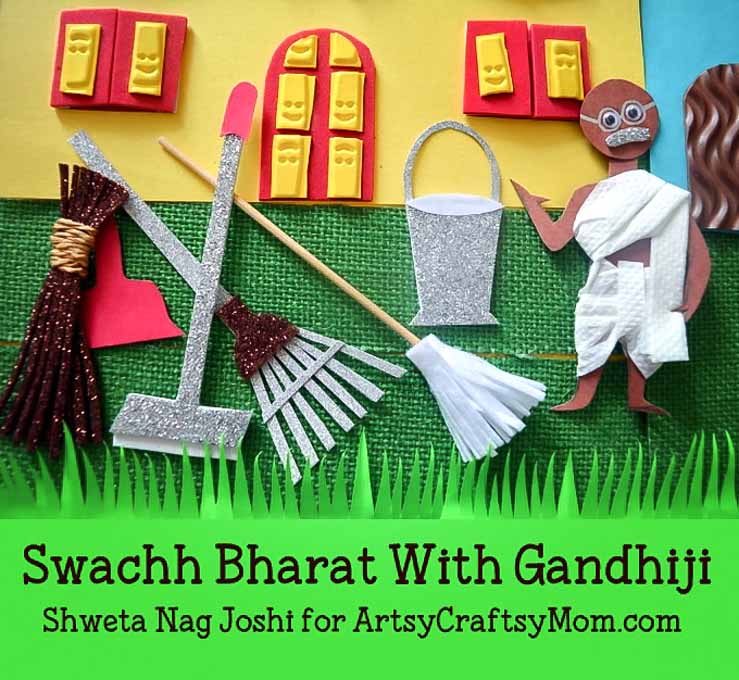 The earlier night, A dirt monster flew down from the second floor and landed in front of Gandhiji’s house. The next day, when Gandhiji was getting ready for his morning walk, he saw the very smelly dirt monster sitting in front of his house. Actually, this was the same monster that had flown from the neighbor, Mr. Mishraji’s, 2nd-floor house.

Gandhiji called out to him, come see what has landed at my doorstep. Mishraji replied that this was the same monster that had troubled them the earlier night and was kicked out of the house with lots of difficulties. But! but!, said Gandhiji, it is now troubling all of us. But before Gandhiji could complete it, Mishraji went inside and got busy with his work & family.

As soon as Gandhiji turned toward the monster, he saw that it was building an army of little monsters. Very soon, two little monsters went back inside and started troubling Mishraji’s son. Now, there was an attack on Mishraji’s Clean and fresh home! Soon they were all over the town wreaking havoc. It was also in the news! The whole town gathered at Gandhiji’s house to ask for help and advice.

Gandhiji very wisely said we need to push these monsters out from every nook and corner in our town. Just keeping our house clean will not help. This dirt monster will leave our home but capture the city. They will build an army and attack us in higher numbers. We will have to make our Good army big and strong. Every citizen in every city and town has to join our good army and become a clean soldier to tackle this menace. Get your weapons ready – Brooms, rakes, and mops. Cmon, let’s start this campaign right now – Left, Left, Left Right Left.

Wasn’t that an amazing message to follow for Gandhi Jayanti? 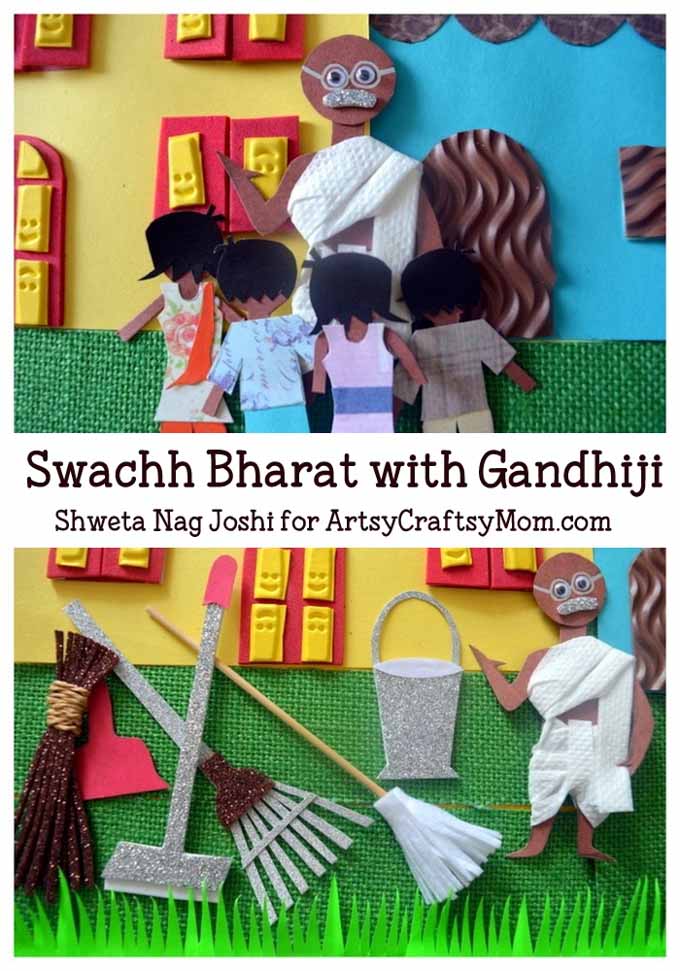 Shweta Nag Joshi – did her MBA from Himachal Pradesh University and worked as a manager with ICICI Prudential until her son was born. She quit her job to invest time in her son’s upbringing. Now that he is 9 and relatively independent, she took up her true calling and started ARTventure with Shweta.  She conducts craft workshops for children in Noida.

Watch a Movie or Documentary on Mahatma Gandhi

Once all the activities are done, you could relax and watch movies together, as a family. Choose movies that deal with the themes that played a vital role in Gandhiji’s life. Here are some movie suggestions: Gandhi, Lage Raho Munna Bhai, Bajrangi Bhaijaan, Swadesh, and Lagaan.

Gandhiji played a significant role in India’s freedom struggle. He also inspired millions of Indians during his lifetime. Even today, his life, values, and his expansive literary output have had a huge influence on people in our country and also around the world. Use the day as an opportunity to make Gandhiji come alive for your children. 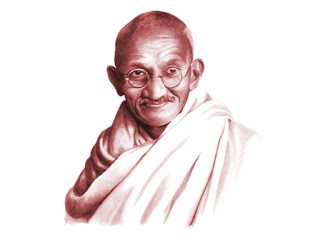 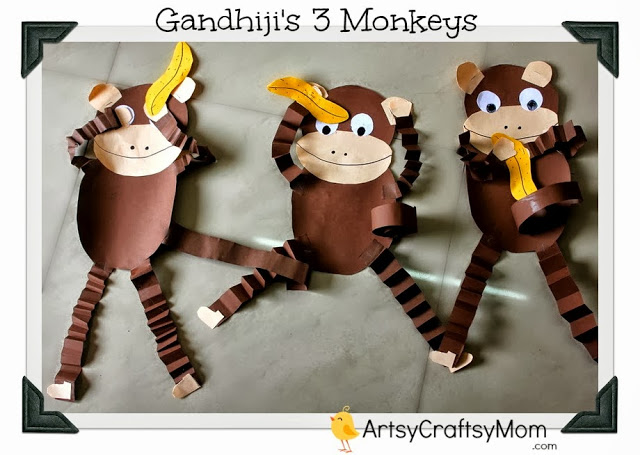 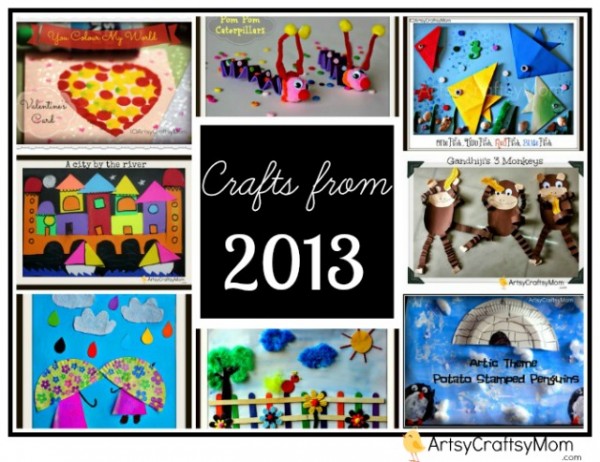