Elves don’t have to be on the shelf, they can be on the tree too! Check out our Felt Elf Christmas ornament that’s super cute and super easy to make!

When I was little, I wasn’t really aware of the Elf on the Shelf phenomenon. The only elves I had encountered were in books, where their main role was working in Santa’s toy factory at the North Pole. It was much later when Lord of the Rings changed my entire idea about elves!

Today, I’m going back to the elf of my childhood – the little guy dressed in green, with a green pointy hat and pointy ears – and he’s come alive in this felt Elf Christmas Ornament craft! So even if you have an elf on the shelf to keep an eye on things, it doesn’t hurt to have a cute one on your tree too! 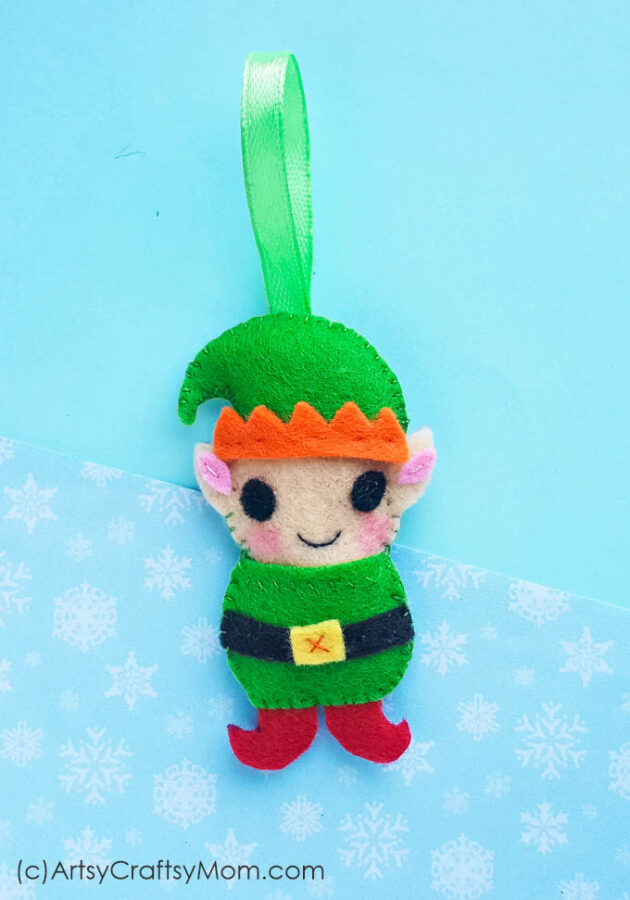 How to make the Felt Elf Christmas Ornament Craft: 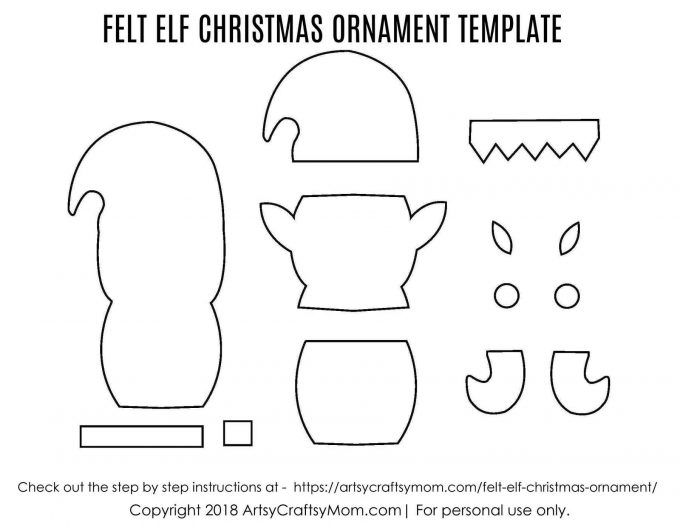 1. Print and cut out the patterns for the elf from the given template. The template includes – 1 base pattern (back side of the elf), 1 hat pattern, 1 head pattern (including ears), 1 clothing pattern, 2 inner patterns of the ears, 2 small round shapes (the eyes), 1 zigzag border strip (bottom border of the hat), 2 shoe patterns. , 1 strip and 1 small square (for the belt).

2. Trace the template patterns on the felt fabrics in colors of your choice and cut them out. Here I went with green for the elf’s back, hat and clothing, red for his shoes, orange for the trim on his hat, black eyes and pink ears. 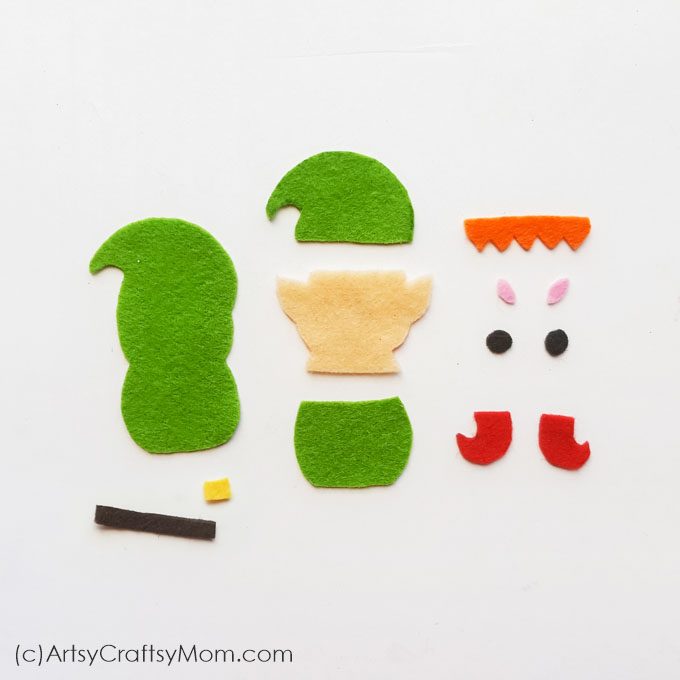 3. Take the head cut out and stitch the eye cut outs in the right places. Also stitch the lips of the elf using black thread (or any colored thread you prefer). 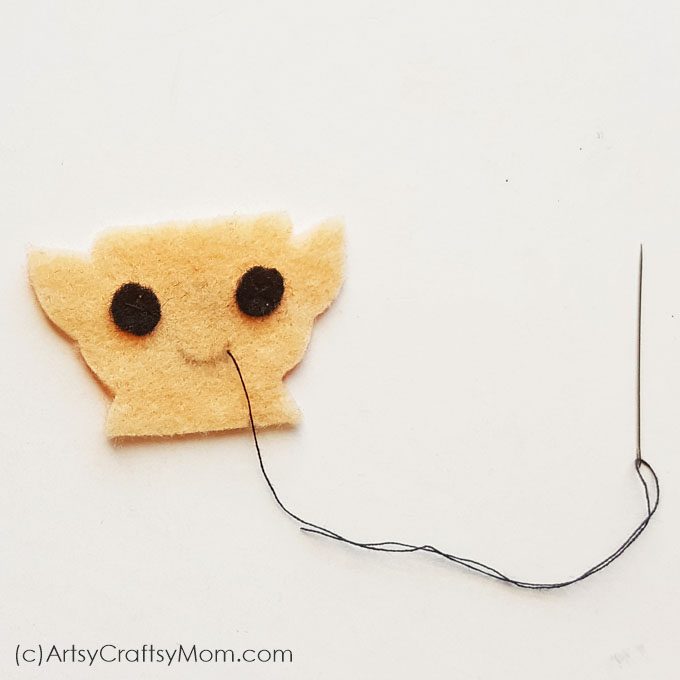 4. Stitch the 2 inner ear cut outs on the ears attached with the head cut out. I also used pink highlighter pen to add blush patterns on both cheeks of the elf. 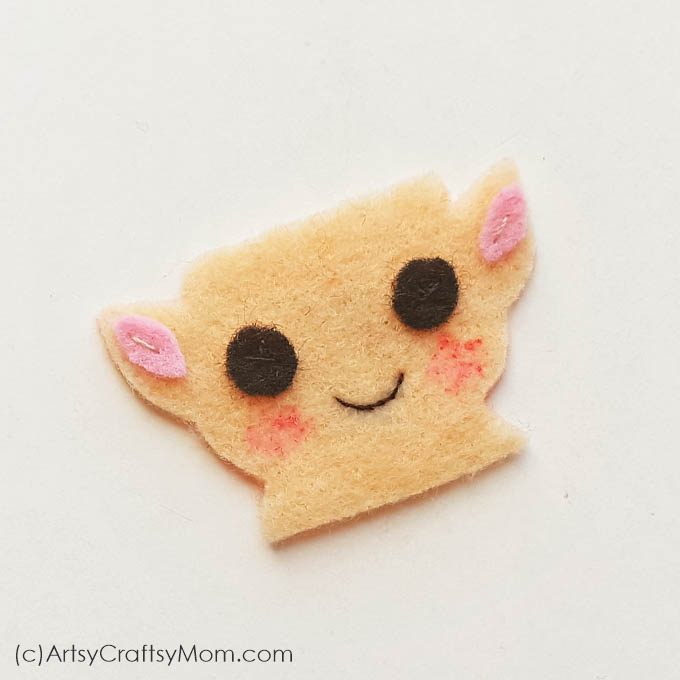 5. Gather all the patterns. Place the base cut out on a flat surface and place the finished head in the right position.

6. Place the hat and the clothes patterns above and below the head, respectively, overlapping the head from both sides. Make sure the sides of the hat, head and clothing align perfectly with the sides of the base pattern. 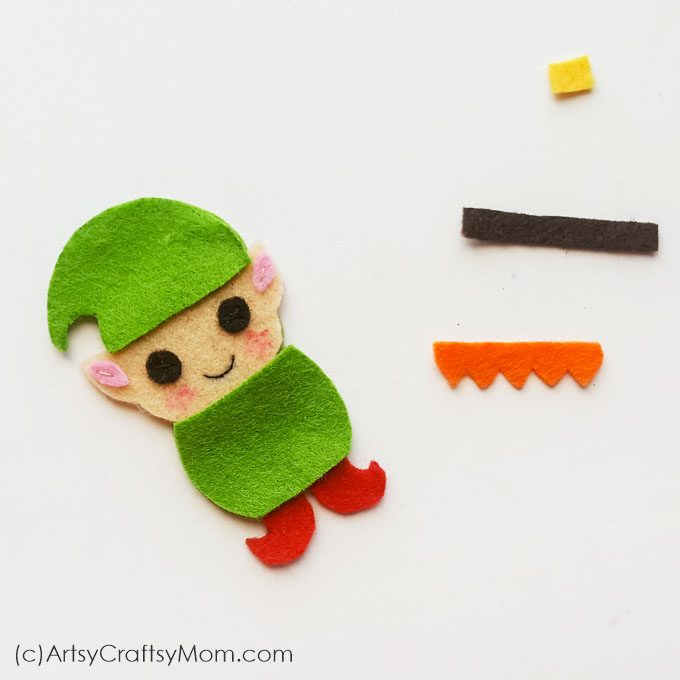 7. Now place the belt and hat border patterns on their places to check if the sizes are correct. 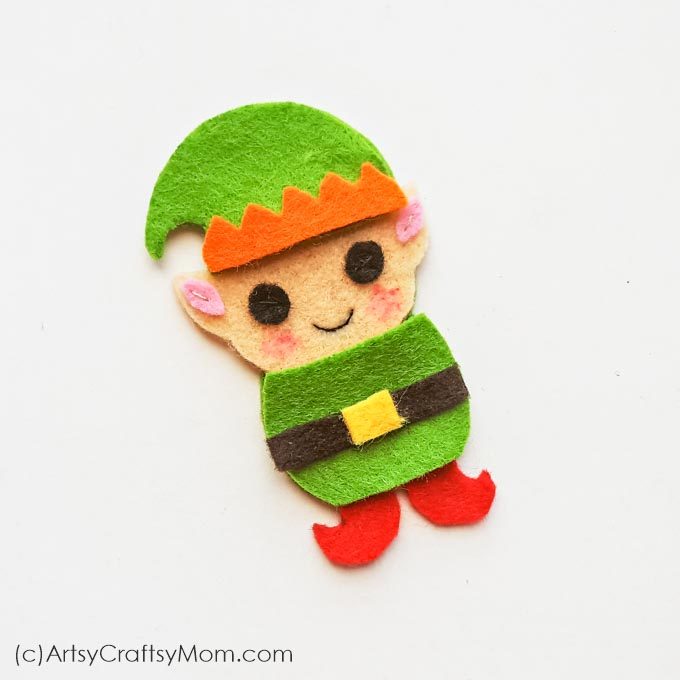 8. Holding the belt firmly, lift the clothing piece along with the belt. Stitch the belt and buckle in place. I did a simple cross stitch on the middle square cut out of the belt to attach all 3 cut outs.

9. Hold the hat, zigzag hat border and the head cut out as arranged and stitch them together along the zigzag border. 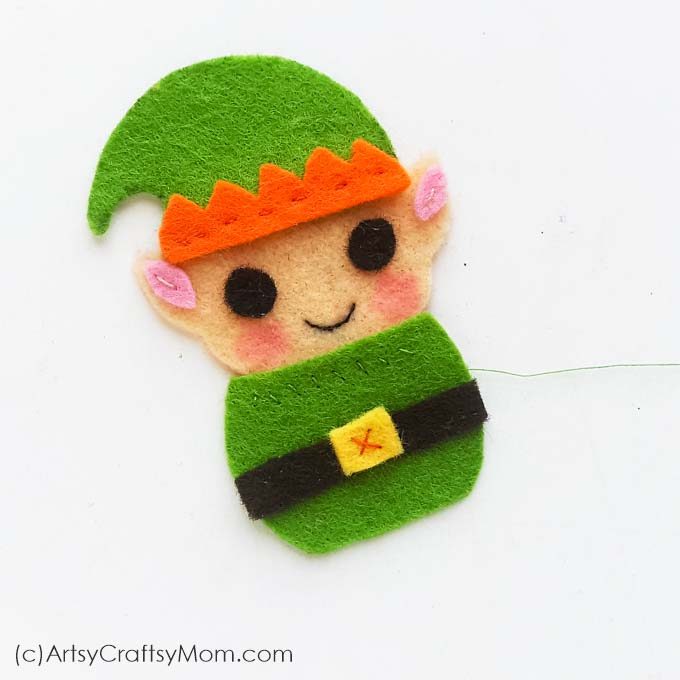 10. Now place the completed clothing pattern below the head (overlapping just the way it was arranged in step 6). Stitch along the overlapped part to attach the head and clothing together.

11. Place the base pattern on a surface and place the 2 shoe cut outs along the bottom end. 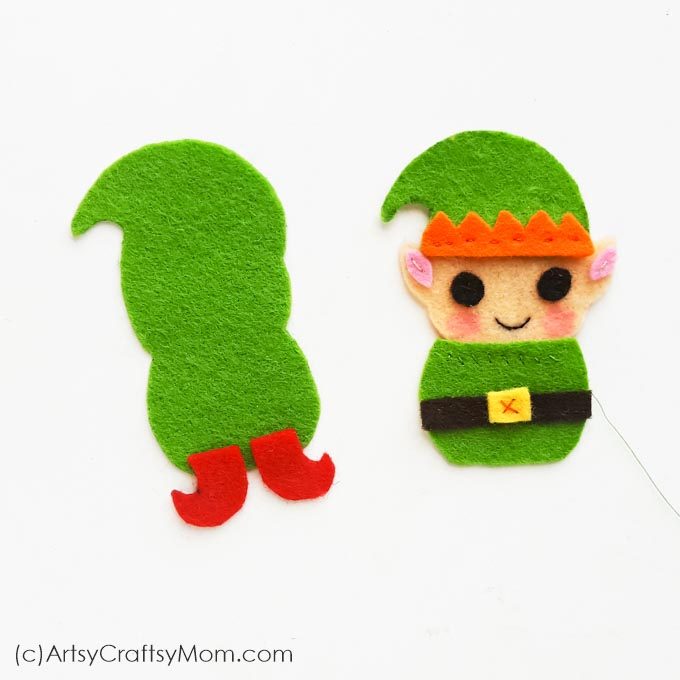 12. Place the prepared front part of the elf on the top of the base, keeping the shoe cut outs in the middle. Stitch around the sides of the elf to attach the base and the front, leaving a small opening to stuff the elf. 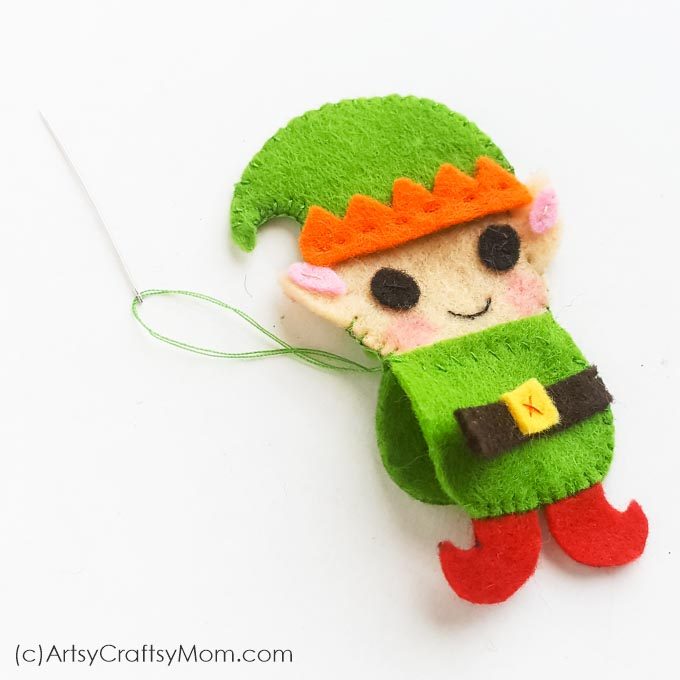 13. Stuff the elf ornament with cotton through the small open end. 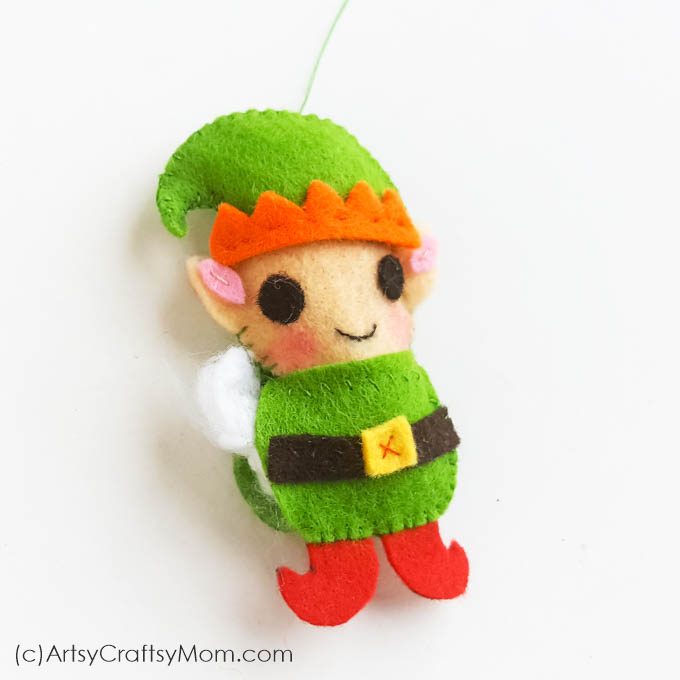 14. After stuffing the elf, stitch the open end to secure the stuffing. Tie a knot and cut off any extra thread. 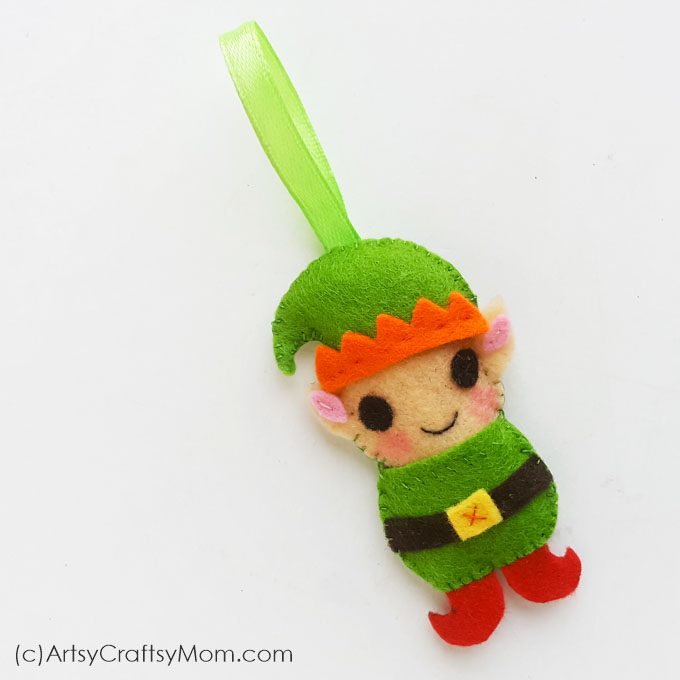 15. Attach a loop of ribbon at the back to hang the elf. You can stitch it on the top of the hat. 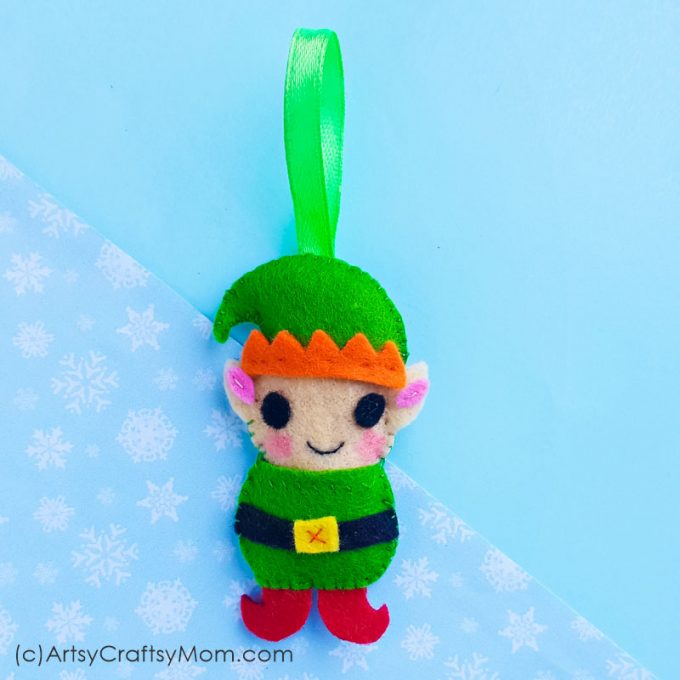 If you’re in the process of dressing up your Christmas tree, you must make this little felt Elf Christmas ornament! And don’t leave him hanging alone – give him some company with our felt snowman and felt Gingerbread Man. With all these cute little handmade ornaments, you’ll have a tree that’s absolutely one-of-a-kind! 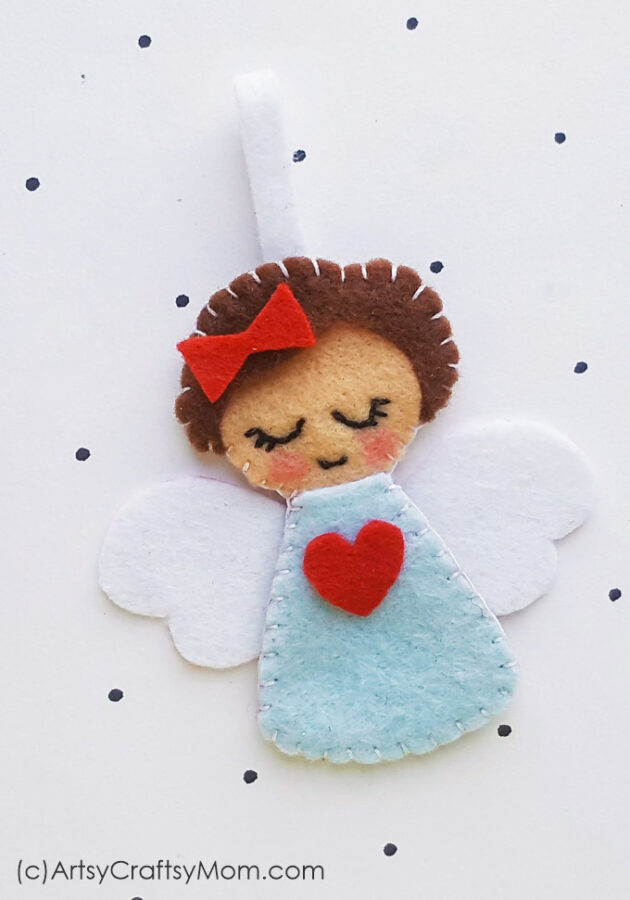 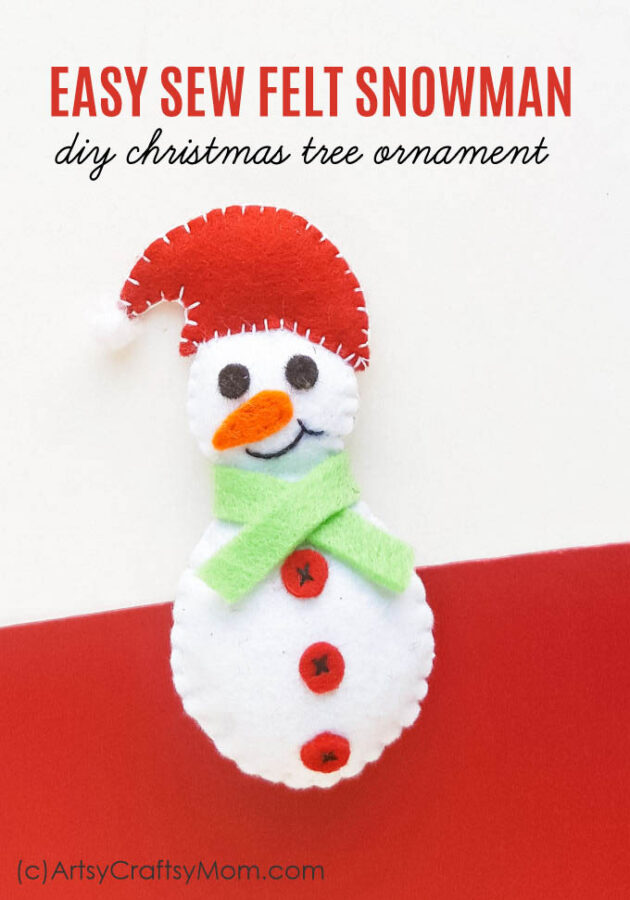 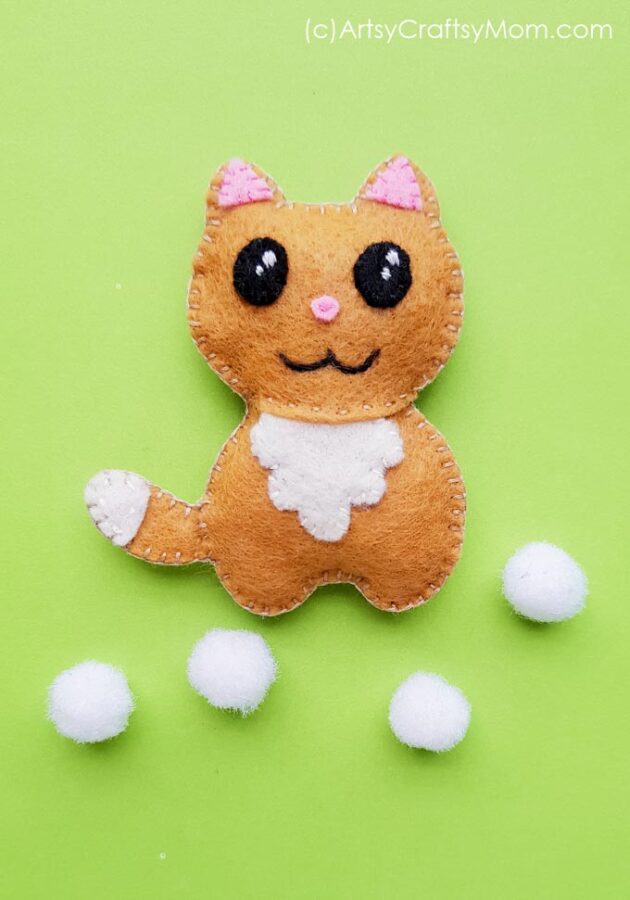 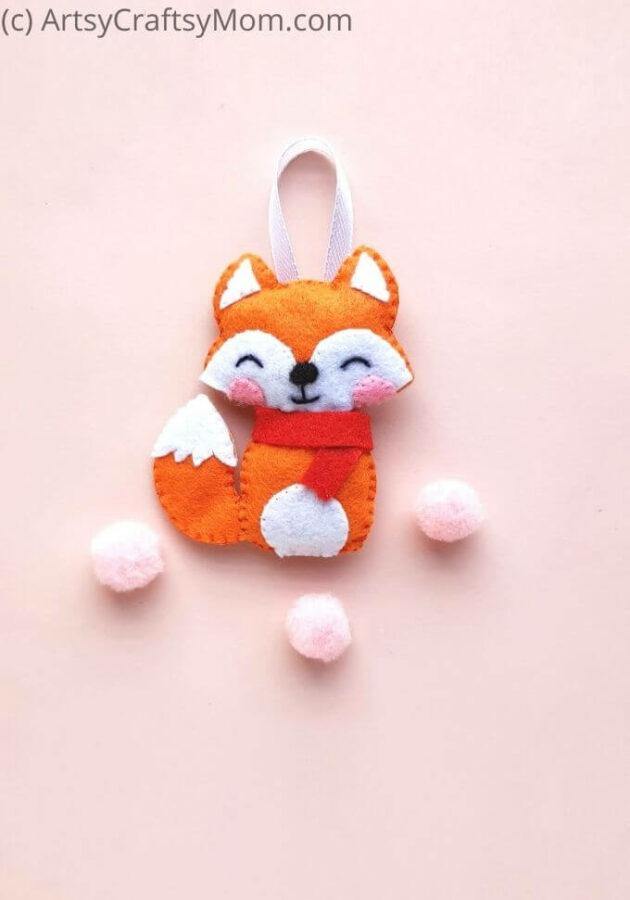